So did Jimmy Carter, Theodore Roosevelt and Woodrow Wilson.

Now, President Donald Trump's supporters are pushing for him to be the next US leader to win the Nobel Peace Prize – a move that's being met by smirks and eye rolls in Europe, where Trump remains deeply unpopular. 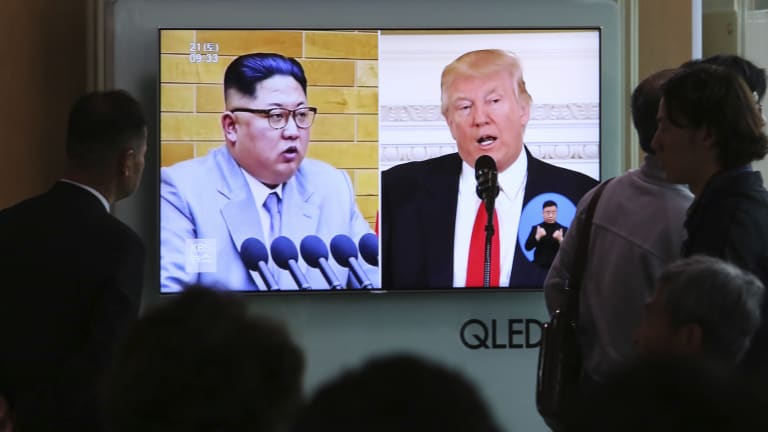 As is customary, legislators in the Nordic region where the Nobel is awarded refrain from commenting on possible nominees. But in Copenhagen, Denmark, there was little appetite for the prospect of a Trump win.

"Trump … the peace prize? You must be joking," said Lene Larsen, a 46-year-old accountant before bursting out laughing. "Maybe it should be a sex prize or a prize for being unpopular."

Hasse Jakupsen, 52, said the prospects of a win were dim.

"I am pretty sure the Norwegians can see through this. Being nominated does not mean that you actually get the prize. It is pretty ridiculous to have such hopes" of getting the prize."

The push comes as Trump is preparing for a historic summit with North Korea's Kim Jong-un, which will serve as the highest-stakes diplomatic test to date for a president whose unconventional approach to foreign policy has also prompted fears of nuclear winter. Trump scored a substantial win on Wednesday when he announced that three Americans who had been detained by Kim were on their way home to the US.

It remains far from clear, however, whether the North will ultimately agree to give up its nuclear weapons and allow independent inspectors to verify their compliance.

Polling has shown Trump and many of the policies he's championed to be broadly unpopular around the globe. The Pew Research Centre has also found that the public's trust in the US president to do the right thing when it comes to international affairs has plummeted since Trump took office.

And Sweden saw the largest drop from former President Barack Obama, who won the Nobel in 2009 less than a year into his presidency, to Trump, with 93 per cent confident in Obama and just 10 per cent in Trump. 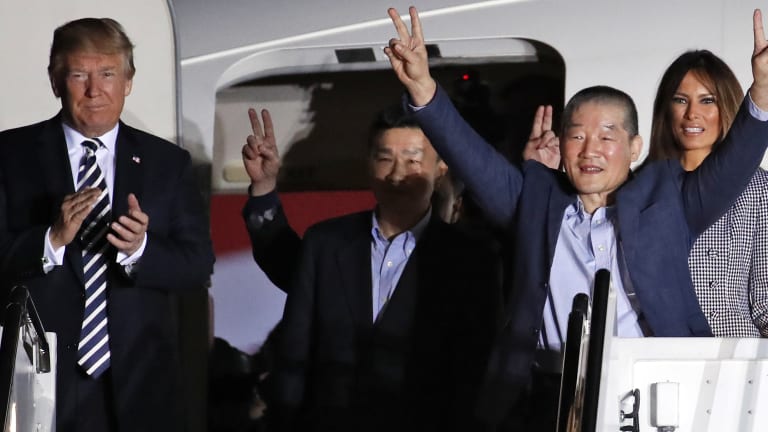 Donald Trump welcomes back three US prisoners released from detention in North Korea.

"He got the Nobel Peace Prize for what he might do," Farage, the former leader of the UK Independence Party, said on a London talk radio station last month.

Farage, who campaigned alongside Trump, said Trump deserved the prize "for managing to get… talks going with North Korea, something that no US president has ever, ever managed to do."

As a member of the European Parliament, Farage is among those who can nominate people for the prize, and said he would be setting up a petition to bolster Trump. 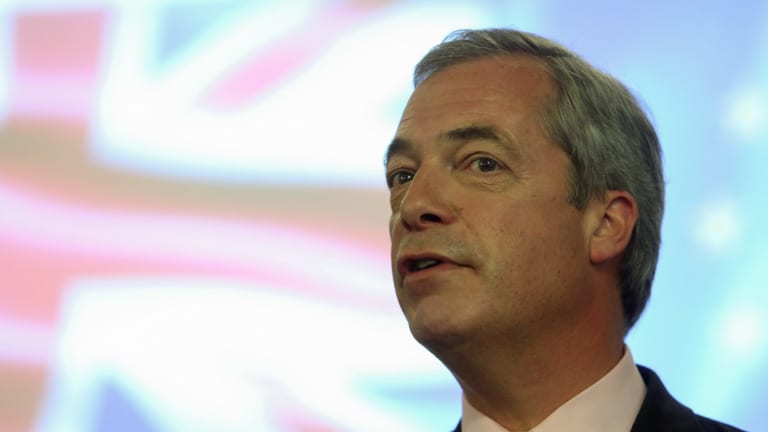 UKIP leader Nigel Farage will start a petition in favour of Trump’s nomination.

Nominations can come from university professors, directors of peace research and international affairs institutes, and former recipients, as well as members of national assemblies and national governments, among others.

To be considered for the Nobel Peace Prize of the year, nominations must be sent to the Norwegian Nobel Committee before February 1 of the same year. There are currently 330 candidates for the 2018 prize, including 114 organisations. Nominations are required to be kept secret for 50 years.

In January, Henrik Urdal, manager of the Peace Research Institute Oslo, told The Associated Press that Trump's name had been submitted for the 2018 prize, but said the nomination lacked "a strong academic justification". The leader of the independent Norwegian peace institute said Trump had been nominated by "an American player with the right to nominate a candidate," but declined to name who.

And in March, the Norwegian Nobel Committee, which selects the prize winners, said someone using a stolen identity had nominated Trump. The Norwegian news agency quoted committee secretary Olav Njolstad as saying it appeared the same person was responsible for forging nominations in 2017 as well.

A Nobel for Trump would be a dramatic end to a confrontation that began with Trump taunting Kim, calling him "Little Rocket Man" and threatening to unleash "fire and fury" to destroy his country.

The idea for awarding Trump the prize has also been championed by South Korean President Moon Jae-in, who reportedly said during a meeting of his senior secretaries that Trump should win the prize instead of him, as the widow of a former South Korean president had suggested.

The idea was quickly embraced by Trump supporters – but surprisingly not by Trump, who is rarely reluctant to pat himself on the back and take credit even when it's not due.

During a recent speech in Michigan, Trump's crowd broke into a "Nobel! Nobel! Nobel!" chant when he mentioned his efforts on North Korea.

Asked on Wednesday whether he thought he deserved the prize, Trump again played coy.

"Everyone thinks so, but I would never say it," he said, adding that the only prize he wanted was "victory for the world".

Messer, the congressman who led the letter effort, had hoped that praising Trump would help win his primary race for the Senate in Indiana, where support for the President had become a litmus test for Republican voters. But Messer, who was highly critical of Trump throughout the 2016 general election, lost his primary on Tuesday night.

The National Republican Senatorial Committee has also promoted the idea, sending an email to supporters that encourages them to "Nominate President Trump to Win the Nobel Peace Prize" by adding their name to a list.

The President's new lawyer, Rudy Giuliani, has also championed the idea, telling Fox News Channel's Sean Hannity that he'd told the President the prize was a given.

"Look at what's going on with North Korea. I told the President, 'You're going to get the Nobel Peace Prize."'

Chatter, grows, Nobel, over, Peace, Prize, prospects, Trump#x27;s
You may also like: