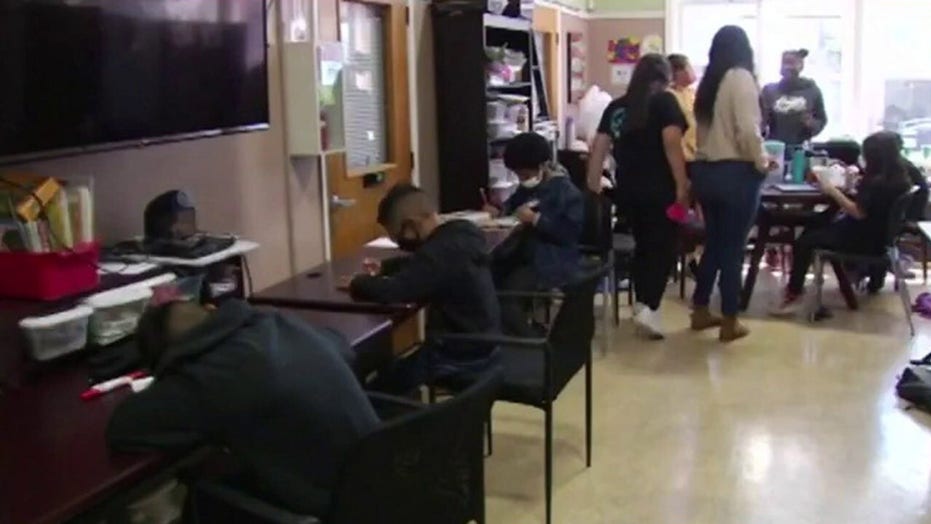 The Chicago Teachers Union has filed a request with the Illinois Education Labor Relations Board (IELRB) on Monday for an injunction against Mayor Lori Lightfoot's school reopening date as coronavirus cases continue to surge across the country.

According to a press release, the union is calling on Chicago Public Schools and Mayor Lightfoot to "set clear and responsible public health criteria by which to honestly judge student and educator safety, instead of arbitrarily setting a reopening date and manipulating statistics to justify their decision."

In addition, the union is demanding that the district to put "real resources" behind safety protocols, including personal protective equipment, COVID-19 screening, testing, contact tracing, vaccination, a nurse in every school, smaller classes that allow for social distancing, social and emotional supports for traumatized students, and upgrades to make ventilation safe.

"CPS has now admitted twice in meetings with the Union that it failed to test school ventilation systems for their ability — or failure — to mitigate the spread of the virus. The district has also promised to hire an additional 400 custodial workers, but barely a quarter of that staff have been hired," the union added. "School districts and unions in every major U.S. city except for Chicago have been able to successfully bargain mutually agreed upon safety standards. In Chicago, the mayor and CPS have elected to go it alone, ignoring parents and refusing to work collaboratively with the Union, which has successfully negotiated safety memorandums of understanding with district charter operators."

The group noted that Black and Brown parents have overwhelmingly chosen for their children not to return to school as the COVID-19 pandemic continues, and claim that Mayor Lightfoot and her Chicago Public School team have "failed to prioritize changes to improve remote instruction," noting issues with broadband Internet access and adequately working devices.

"Almost a third of the more than 500 district-run school buildings have surfaced COVID-19 cases since September," it added. "Union representatives have fielded hundreds of complaints from school clerks and technology coordinators working in buildings about CPS safety failures, from dirty buildings and the lack of PPE, to inadequate ventilation, which is a known factor in the spread of the coronavirus. The district has refused to follow a clerk’s binding arbitration decision allowing clerks and technology coordinators to work remotely four days a week, and many have become infected with the virus as a result."

The IELRB previously rejected the Union's request for an injunction, arguing that CPS had not yet set a date for reopening. The new filing is asking the Board to revisit that decision and grant injunctive relief that bars schools from reopening until CPS and the union have agreed to safety agreements.

Chicago Public Schools currently plan to bring pre-kindergarten and cluster program staff back on January 4, 2021, and students back on Feb. 1, 2021. The union expects the IELRB to review the request later this month.

CDC DIRECTOR: SCHOOLS ARE NOT A MAJOR COROANVIRUS TRANSMISSION SOURCE

Medical experts like Centers for Disease Control and Prevention Director Dr. Robert Redfield and Director of the National Institute of Allergy and Infectious Diseases Dr. Anthony Fauci argue that in-person instruction can continue as long as it follows the science and is done in a safe way.

Redfield said last week that infections among teachers and students occur because of community transmission or virus spread at home.

The CDC director emphasized the benefits of in-person learning, like socialization, mental health services and food programs, saying at-home learning can, unfortunately, give rise to more substance abuse and suicide.

“I just think it's healthy for these kids to be in school,” Redfield continued. “That said, they got to do it safely and they've got to do it responsibly. And when this was started over the summer, no one really knew for certain. They thought that these public health measures would work. But now the data clearly shows us that you can operate these schools in face-to-face learning in a safe and responsible way.”

Meanwhile, Fauci told Martha Raddatz on "ABC This Week" that the spread of COVID-19 between children was "low," especially compared to other areas.

"We say it, not being facetiously or having a soundbite or anything, but you know: close the bars, keep the schools open, is what we really say," Fauci said. "Obviously, you don't have one size fits all, but as I've said in the past, and as you accurately quoted me – the default position should be as best as possible, within reason, to keep the children in school and get them back to school."

According to the latest update from Johns Hopkins University, there are more than 14.8 million confirmed coronavirus cases and more than 283,000 related deaths in the United States.

Chicago, I, seeks, teachers, Union
You may also like: