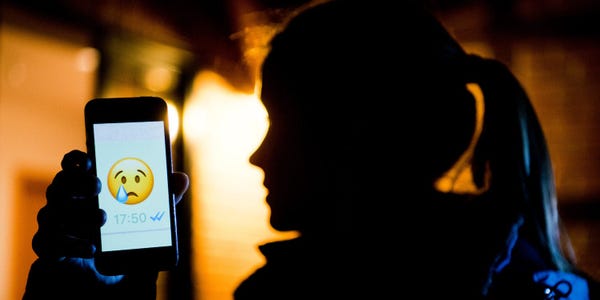 It was just before the morning bell when Cassidy found out that a semi-naked image of her was making its way around her high school.

"I remember feeling like my heart sunk right to the bottom of my body," she recalled to Insider in a phone interview.

"I remember looking up and around me the whole time, just thinking to myself: 'Who here has seen this picture?'"

Cassidy is a pseudonym — the woman, now 23, asked not to be identified by her real name to the sensitive nature of the matter. Her identity is known to Insider.

The Seattle native was 16 when she sent her then-boyfriend two private pictures of herself, partially naked, in her bedroom. Several months after they broke up — when she was 17 — almost everyone at her high school had seen it.

It was never clear how her classmates got the photos — Cassidy's ex repeatedly maintained his innocence and said he had deleted the pictures.

Cassidy said she was an ambitious student, aspiring actress, and a member of the student council. She said she remembers feeling concerned about what the leaked pictures would do to her reputation.

"Being a teenager, I was very insecure about myself, and I just felt unsure about things and embarrassed because this picture was this representation of me that I didn't want out there," she said.

"I felt like the core of my anxiety came down to the fact that I didn't know what people thought about me. I know that sounds stupid and bad to think, but that's exactly what went through my mind."

After her school learned about the photos — one of the other girls' mothers found out and reported it — Cassidy said she felt "judgment" from people around her, despite having supportive friends and parents.

"I remember when I was called into the high school office, one of the people in charge mentioned to me that it was child pornography and he said that what I did was illegal, which shocked me because I didn't do anything other than sending a picture to my boyfriend, " she told Insider.

Cassidy's story is all too common.

Earlier this month The Guardian reported, citing data from the police, that 541 people whose sexually explicit images or videos were shared in the UK in 2019 were under the age of 18.

The youngest of those were were eight years old, the newspaper reported.

Data for the US is not yet known.

"Children are getting smartphones and social media accounts at much younger ages these days, so I can easily see how numbers like that arise," Will Gardner, CEO of Childnet International, told Insider.

"From what we've seen, victims don't feel comfortable talking about this issue and coming forward. My concern is that if young people don't feel able to report that, they will eventually just come to accept it and then think that it's just normal behavior," said Gardner.

"That would be a tragedy and a real disservice to young people and it doesn't properly reflect their needs."

"So we do need to talk about these really tricky issues with young people in an open and understanding, non-victim-blaming way."

As young people increasingly reliant on technology, they have also become more vulnerable to new forms of sexual harassment.

More and more young people are becoming perpetrators, too.

According to the same data published in The Guardian, a third of the people who shared nude pictures and videos of children nonconsensually in Britain last year were also under 18.

Experts are now calling on schools to do better at educating children about sexual health.

The UK government recently mandated a new relations and sex-education curriculum, which includes courses on LGBTQ+ relationships and how to navigate consent. This is the first update to the curriculum in 20 years.

The government had made the curriculum mandatory in all schools this September but has since allowed schools to delay its introduction of those classes until Spring 2021 due to the disruption brought on by the coronavirus pandemic.

So for now, how and when schools decide to implement the curriculum is up to them.

'This isn't funny, or comical, or classroom banter'

"I think there needs to be much more of a deep dive into these issues because it's as important as maths or English. As far as I'm concerned, being able to safely navigate sexual encounters is hugely important."

Parker, who is also a full-time criminal barrister, founded SCP in 2014 with the mission of teaching 11- to 18 year-olds how to engage with issues surrounding consent and sexual assault in schools.

"We see it with young people who breach it without realizing they're breaching it and the consequences can be enormous, they can be life-changing. It can affect young people long into their adult life."

"Perhaps lockdown and remote living is also going to see young people be on their phones even more, which might contribute to that," she said.

"I just think it's really important to be able to have an open conversation with young people to let them know that this isn't funny, or comical, or classroom banter. This is an offense that can leave many people scarred and traumatized."

Meanwhile, Cassidy is glad that her case was reported and dealt with. The boys who had been collecting images of the girls at their schools faced a two-week suspension, and one of them even apologized to her.

"It wasn't very sincere but I could move on from it," she said.

She has since said she's managed to turn the experience into something positive.

"Looking back, it seemed to be a turning point in life," she said. "I definitely felt like it was important for it to happen for me to be able to be the person I am today, even if it was such a horrible thing."

"It made me realize that there's more to life than high school," she added.

News UK, Revenge P, uk-weekend
You may also like:

Violent robber is jailed for 14 years for carjacking elderly couple

Mom admits murdering daughter, 5, who died from horror meth poisoning after drinking from her bong