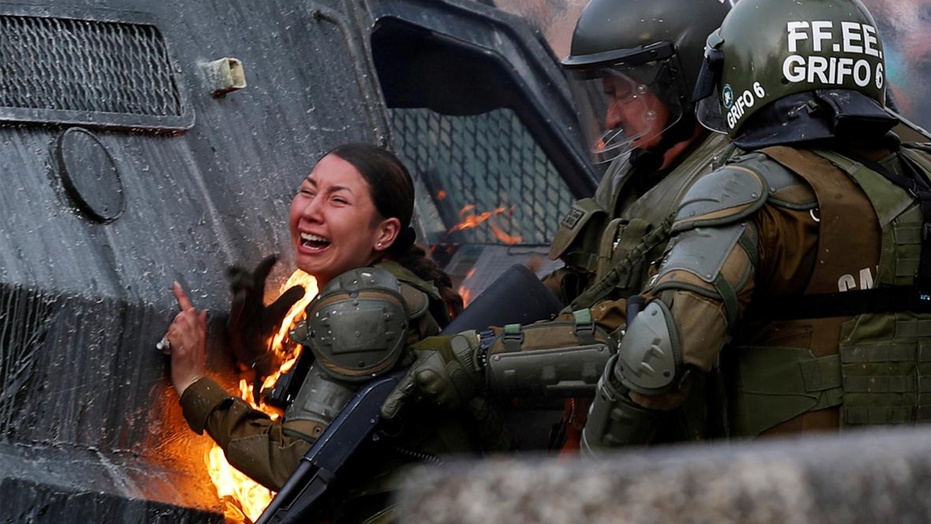 Two female police officers trying to drive off protesters in Chile’s capital were set on fire after demonstrators threw Molotov cocktails in direction of the officers.

Dramatic photos from Santiago on Monday showed members of the city’s special forces quickly jumping into action after the cocktails were thrown, using fire extinguishers and their hands to put out the fires. 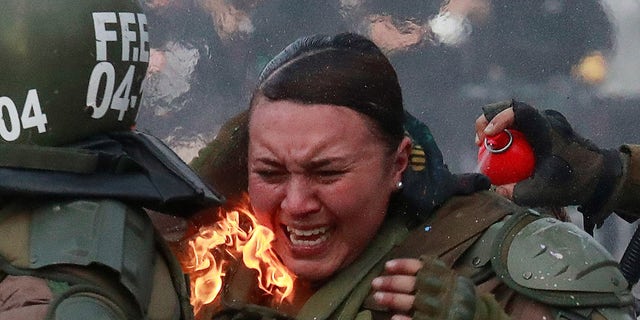 A riot police officer on fire is assisted by colleagues during a protest against Chile’s government in Santiago, Chile, Nov. 4, 2019.
(Reuters)

One officer could be seen visibly grimacing in pain as her colleagues tried to put out the flames licking around her face.

The two officers – Maria Jose Hernandez Torres, 25, and Abigail Catalina Aburto Cardenas, 20 – were in serious condition at a hospital in Santiago, Reuters reported. 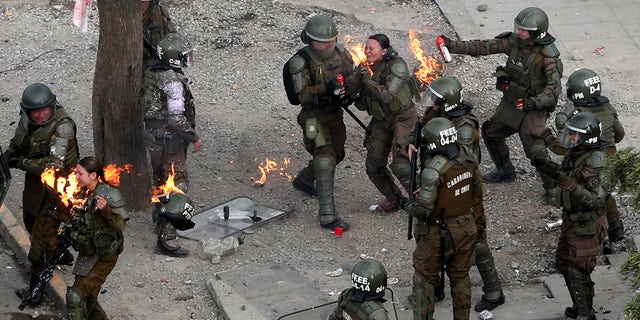 Police officers run to get assistance after being hit with a gasoline bomb thrown by protesters during an anti-government protest in Santiago, Chile, Monday, Nov. 4, 2019.
(AP)

Chile has been facing weeks of unrest, triggered by an increase in subway fares. The protests have shaken a nation noted for economic stability over the past decades, which has seen steadily declining poverty despite persistent high rates of inequality.

Jorge Silva, the Reuters chief photographer in South East Asia who is in Chile covering the protests, said he was standing close to the Baquedano metro station when he saw a flare out of the corner of his eye.

“I realized a police officer had been set on fire by a Molotov and her team were trying to extinguish the fire,” he said. 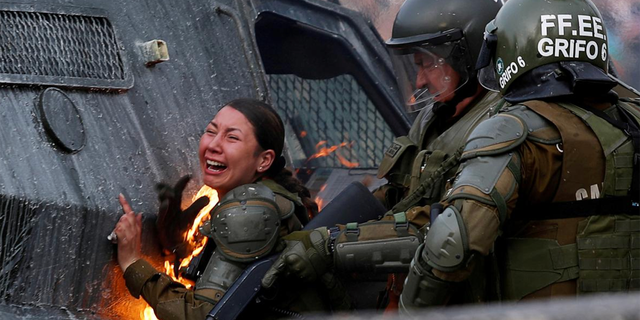 A riot police officer on fire reacts during a protest against Chile’s government in Santiago, Chile
(REUTERS)

“From that moment things intensified, the police began to use a lot of gas and rubber bullets, the noise of the repeated fire was loud,” he said. 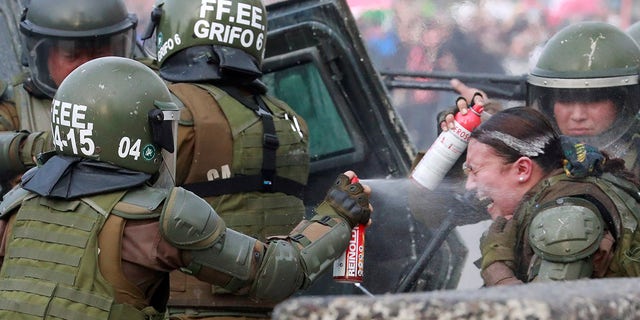 A riot police officer that was on fire is assisted by colleagues during a protest against Chile’s government in Santiago, Chile, Nov. 4.
(Reuters)

The country’s interior minister visited the two police officers in the hospital and denounced the attack as “pure violence … nothing to do with the legitimate demands of citizens.”

“It was a violent, cowardly aggression against two police officers who were working to protect the safety of our compatriots,” he said, according to Reuters. 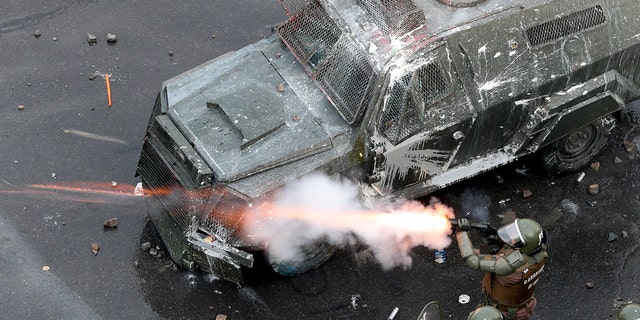 Chileans have poured into the streets demanding better salaries and pensions, and a more equal distribution of wealth. A gathering in Santiago on Tuesday drew just 2,000 to 2,500 people, according to an estimate by Felipe Guevara, mayor of the Santiago metropolitan region.

Javiera Martínez, a 23-year-old student, told The Associated Press that she is still protesting because "the demands have not been heard, they have not wanted to hear the social discontent." 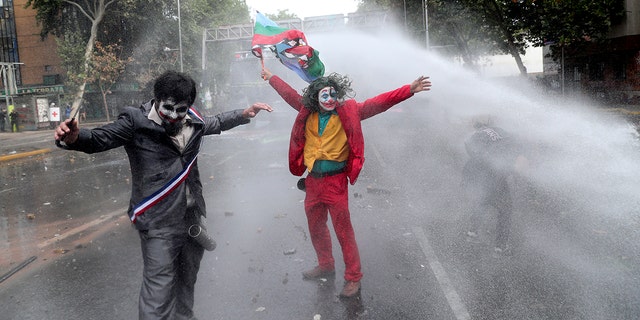 Men dressed as clowns, one dressed as the the movie character “The Joker” flying a Mapuche indigenous flag, are sprayed by a police water cannon during an anti-government protest in Santiago, Chile, Monday, Nov. 4, 2019.
(AP)

Bastian Marín, 29 and a business executive, attributed the smaller protest to the fact that people have to work.

"It's hard to have the same number of people every day," he said, adding that a march planned for Friday is expected to be much larger.

The unrest began 19 days ago over a hike to subway fares, but it has grown into a massive movement demanding a broad range of changes. Chile's center-right government has responded with a host of proposed social improvements, which must still be approved by Congress.

Chilean, officers, on, police, Set
You may also like: