Shanghai: China is able to make India suffer more severe military losses than in the past if it wants to engage in competition, state-backed newspaper Global Times said on Tuesday, after a fresh border flare-up between the two nuclear-armed countries.

Indian forces foiled an attempt by Chinese troops to occupy a hill on the Asian giants’ disputed border in the western Himalayas, officials in New Delhi said on Monday.

"India … said it preempted Chinese military activity," the Global Times said in an editorial. "The word 'preempt' shows it was the Indian troops that first took destructive actions, and the Indian troops initiated the stand-off this time."

It added that India faced a "powerful China" and that New Delhi should not have any "illusions" of support from Washington over the issue.

"But if India wants to engage in competition, China has more tools and capability than India. If India would like a military showdown, the PLA [People's Liberation Army] is bound to make the Indian army suffer much more severe losses than it did in 1962."

The Global Times is published by the People's Daily, the official newspaper of China's ruling Communist Party.

Senior Colonel Zhang Shuili, a spokesman for the Western Theatre Command of the People's Liberation Army earlier accused the Indian military of "blatant provocation" and ruining the agreement the two sides had reached over the area by making illegal incursions.

"This action by the Indian side has seriously violated Chinese territorial sovereignty, and seriously damaged the peace and stability of the Chinese-Indian border region," Zhang said, according to Xinhua, China's official news agency. He demanded that India immediately withdraw its forces and "strictly control and constrain frontline troops." 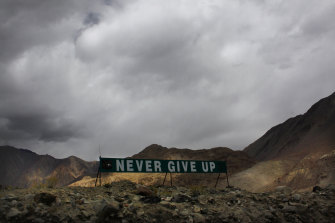 A banner erected by the Indian army stands near Pangong Tso near the India-China border in Ladakh in 2017. Credit:AP

"Chinese troops are taking necessary measures in response and will closely monitor developments," he said.

The trouble seems to reflect that despite all the diplomatic activity between the two sides, and ongoing meetings between Chinese and Indian generals, the border remains a raw flash point in an increasingly nationalistic era.

In a terse and somewhat cryptic statement, India's Defence Ministry had said the Chinese army had "violated the previous consensus" and "carried out provocative military movements" near Pangong Tso, a lake in the remote Ladakh region.

Indian army officers and security analysts said Chinese troops landed a few days ago on the southern side of the lake, which traditionally has been considered Indian territory — a move the Indians saw as the latest example of Chinese aggression in a long string of provocations.

The move provoked a stand-off and then a rapid build-up. Troops from both sides yelled at each other and surged to within a metre or two before commanding officers from both sides pulled them apart. No punches were thrown and no one was injured, the analysts said.

Tensions between the two armies in the freezing snow deserts of the Ladakh region have been running high for months.

In June, 20 Indian soldiers were killed in hand-to-hand fighting with Chinese troops in the nearby Galwan valley, the neighbours’ most serious military clash in more than half a century.

Both sides had agreed to pull back after that clash, but the Indian Army accused Chinese forces of violating that accord over the weekend.

can, china, India, Make, S, suffer
You may also like: