London: The Chinese authorities are using a potentially risky strategy to help identify coronavirus patients by stopping the sales of fever and cough medicines to force people to go to hospital rather than self-medicate. 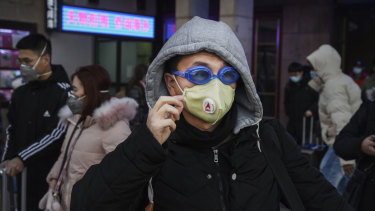 Authorities have blocked the sale of cold medicine to try to flush sick people out of their homes.Credit:Kevin Frayer

The death toll from the virus, which can cause breathing difficulties, topped 1000 yesterday, with the number of infections soaring past 43,000.

At least three Chinese cities have announced over the past week that they will ban the sales of medicines that treat two of the main symptoms of the virus – fever and cough – to smoke out anyone trying to mask their illness at home.

The cities include Hangzhou in the east, which has almost 10 million residents and 157 confirmed cases. It announced on Feb 7 that retail pharmacies would not be able to sell 106 types of medicines, including both Western and traditional Chinese options.

The measures target drugs containing codeine, ibuprofen and aspirin in particular, and extends to online sales.

china, inf, out, smoke, to, tries
You may also like: