Lima: The Peruvian Navy is carefully watching a fleet of around 250 Chinese fishing vessels sailing just outside the Andean country's waters, angering the domestic fishing industry and sparking a Twitter war between Washington and Beijing.

The fleet, previously fishing for giant squid near the Galapagos Islands off Ecuador, was detected this week some 370 kilometres off the coast of Peru, the local maritime authority reported on Friday (Saturday AEST).

"Our Navy is making overflights ensuring there are no such vessels within the scope of our jurisdiction, which is 200 miles," Defence Minister Jorge Chavez said. 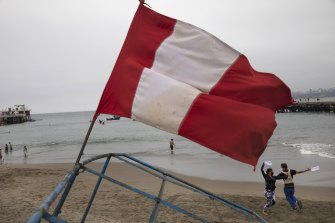 A Peruvian flag flies on the beach in Chorrillos, Lima, as a couple dances on the sand. More than 250 Chinese fishing vessels are operating just outside Peru’s maritime zone.Credit:AP

The commander of the Coast Guard operations, Rear Admiral Jorge Portocarrero, said the fleet was identified and located after a low-altitude flight of an exploration aircraft and a patrol vessel between Sunday and Wednesday.

"Not all are in a single place, they are scattered," he said, adding there were 250-270 ships. "We have no evidence of them having entered our maritime space."

The United States embassy in Lima said the Chinese vessels had a history of avoiding tracking and seemed to "be dumping plastic" pollutants.

"Over fishing can cause enormous ecological and economic damage. Peru cannot afford such a loss," the US embassy said on Twitter.

The Chinese embassy responded that it attached great importance to protecting the environment and the ocean. "We hope that the Peruvian public is not deceived by false information," it said on Twitter.

Peru's Foreign Ministry sought to defuse the tension, saying it had expressed discomfort to American officials about the "inaccuracy" of the US embassy's tweets. Peru is the world's second largest producer of copper, much of which is bought by China.

Vice-Minister Talavera said he had told US officials that Peru "is a friend and partner" of both the United States and China and called on them to resolve their differences through dialogue, understanding and cooperation.

"It's an open secret that every year vessels mainly from China … are installed just at the edge of 200 miles off Peru to extract this resource," Cayetana Aljovin, president of the National Society on Fishing, said on Friday.

"By extracting an unregulated resource in those waters, it could negatively impact the Peruvian ecosystem."

The government approved a law in August requiring local and foreign boats operating off the coast to use GPS and SISESAT equipment, a satellite tracking system for vessels.

Portoccarero stated the fleet of Chinese ships has been present in the Pacific Ocean for years, ranging from the north of Chile, Peru's coast and close to the Galapagos Islands, depending on the migration patterns of the squid.

He added that in 2004, three Chinese-flagged ships were captured within Peruvian maritime territory, after an operation with a navy submarine and helicopter, though added this sort of fleet was found in places around the world.

"We have a large one in front of Argentina, another in the north of Brazil, there are several surrounding Australia, New Zealand, East Africa, and in the Indian Ocean. It is a global issue," he said.

In July, Global Fishing Watch reported that China’s distant-water fishing fleet had hoovered up more than 160,000 tonnes of Pacific flying squid, worth more than $560 million, potentially in breach of UN sanctions

Chinese, Fishing, fleet, OFF, peru
You may also like: