Christian parents and five brothers of marketing executive are cleared

Christian parents and five brothers of marketing executive are cleared of killing him in a botched exorcism at their £1.3m north London home over ‘belief he was possessed by demon’

The parents and five brothers of a marketing executive have all been cleared of killing him in a home exorcism.

Kennedy Ife, 26, suffered a cardiac arrest after he was restrained by his family in August 2016.

Police officers arrived to find them attempting to resurrect him from the dead.

The Old Bailey heard the family, who described themselves as ‘charismatic Christians’, held deeply religious beliefs and mistakenly thought Kennedy had become bewitched. 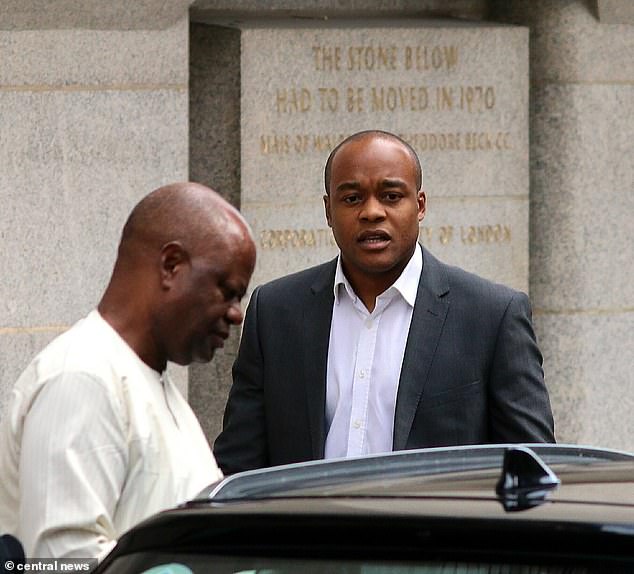 Kennedy’s father Kenneth, 64, and brother Roy 33, outside the the Old Bailey at the trial

Kennedy Ife’s parents and brothers misguidedly believed he was ‘possessed by evil spirits’ and set about ‘curing’ him with prayer and restraint.

They allegedly used cable ties, rope and handcuffs to restrain the ‘vulnerable’ 26-year-old at home in Enfield, north London, in the days before his death in August 2016.

Kenneth was a professor and consultant to the Economic Community of West African States who has advised the British government and met the Queen several times but still harboured bizarre beliefs.

The family were cleared by the jury of manslaughter, false imprisonment and causing or allowing the death of a vulnerable adult after a month-long trial.

One jury member nodded and smiled at the family as they filed back into court and two women jurors appeared to have their hands clasped in prayer as the verdicts were announced.

Prosecutor Tom Little had claimed the family restrained the victim for 67 hours and treated him ‘like an animal.’ 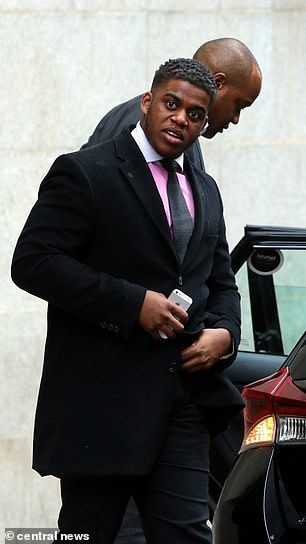 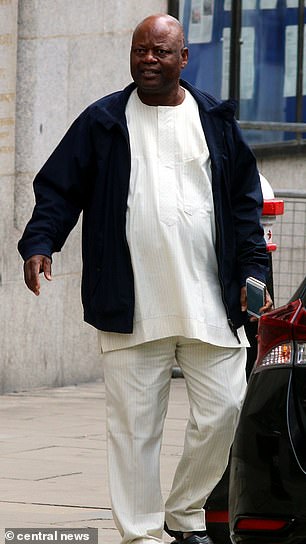 Kennedy’s brothers Daniel and Roy (left) and Kenneth (right) outside the Old Bailey. They have been cleared of manslaughter

‘The family put misguided religious beliefs about this young man, about whether he was possessed by a demon or evil spirits before the obvious and common sense conclusion that he needed help,’ he said.

A pathologist founded more than 60 injuries, all consistent with forceful restraint.

But the family insisted Kennedy he had been only been held briefly for his own safety.

During the trial, jurors were shown footage from a police officer’s body worn camera after they were called to the house following Kennedy’s death.

The family can be seen through an open door with first-class Cambridge graduate Colin leading them through prayer, chanting: ‘He is released right now in the name of Jesus.

‘No corpse shall be taken from this place because there is no corpse in this place.

‘We call that name back to the land of the living in the name of Jesus.’

Mr Little said: ‘This was an attempted resurrection.’

Jurors heard the family held ‘deep and unusual religious beliefs’ and put the deterioration in Kennedy’s health down to his having been possessed by evil spirits.

The trial heard how members of the family held deep and unusual religious beliefs and were connected with the Jesus Sanctuary Ministries in south-east London. 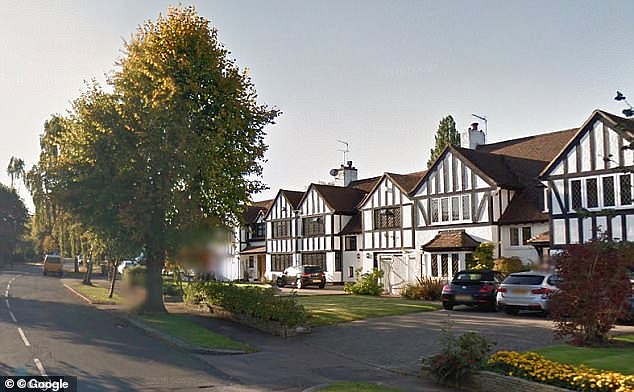 The family restrained Kennedy in the family home on this street in Barnet, north London

On August 19, Kennedy became aggressive, bit his father and threatened to cut off his own penis, the court heard.

Rather than taking him to see a GP, his mother, known at the church as Sister Jo, sought advice from a minister, the court heard.

The family then set about attempting to ‘cure’ Kennedy through restraint and prayer over the next three days, jurors were told.

Brother Roy Ife told jurors: ‘He had his hand in his boxer shorts and he was saying something along the lines that he wanted to cut off his penis. It was shocking to hear.’

The charity worker said he did not consider calling for professional help because it was a ‘domestic issue’.

He told jurors Kennedy was suffering from a ‘manifestation of a lack of sleep’ and he never thought it was life-threatening.

According to student Colin Ife, his stricken brother had ranted about the ‘mark of the beast 666’.

Dr Ife, who has a PhD in mineral engineering and was pictured meeting the Queen, told jurors he ordered his sons to take shifts and use ‘overwhelming force’.

The Nigeria-based defendant denied the accusation that his ‘ancestry’ and ‘association with cults, occults and secret societies’ played any part.

When Harry eventually phoned 999 shortly after 9am on 22 August he told the operator his brother had ‘gone a bit cold’ after feeling ‘dehydrated’ and ‘a bit weary’.

Relatives later told paramedics that Kennedy had been behaving violently and aggressively over the preceding three days forcing them to resort to physically holding him down until he became calm.

He had subsequently developed breathing difficulties during one such episode earlier that morning, they said.

In a police interview, Colin told officers Kennedy was behaving fine until eating a Chinese buffet on 13 August, when he started complaining of pain in his throat and difficulty sleeping.

By 18 August he ‘complained about a seed in his stomach’ and a ‘python or snake inside him’.

‘Something took over him, we believe it was a demon because it was obviously not normal, it was something evil,’ Colin added.

Giving evidence, Kenneth, Josephine and their eldest son Roy all insisted Kennedy was only restrained sporadically over that weekend, with the bindings removed after around 20 minutes.

Jurors were told the first occasion was on Friday 19 August when Kennedy threatened to chop off his own penis before charging at his mother’s bedroom where she had barricaded herself inside.

Kenneth, described seeing three of his sons grab Kennedy, who he described as his ‘favourite’.

But when pressed on who was involved, he told jurors he was ‘not sure which particular one did what’.

Kennedy was bound again later that evening when he ‘erupted into a rage’ and punched Colin after going for a walk, Roy said.

He described a third period of constraint on Monday morning after Kennedy ‘suddenly just stood up as if he was going to charge at one of us’ during his morning devotion prayer and tried to bite at his own wrists.

The court heard his mother, Josephine, helped her church produce videos for the Jesus Sanctuary Extra YouTube page which features clips with titles such as The Reality of Demons.

A handwritten note found on her bed stated: Prophetic word from JSE (June 8th – Don’t Go Far Galatians 3 1 – Anyone who has bewitched your son or daughter (if you feel your child is under a spell). Pick up earth, and throw it to North, South, East and West. D for four days. After there will be an encounter.’

She admitted believing in ‘evil spirits’, ‘demons’, ‘miracles’ and ‘resurrection’ but insisted that was nothing ‘unusual’ given her Christian faith.

Mrs Ife denied being ‘part of a group of seven that restrained Kennedy’ and kept him under guard ‘every minute of the day’.

But she conceded that restraint was justified ‘if Kennedy poses a threat to himself, his life or to others’.

Neither of them knew who the handcuffs found at the house belonged to and both parents struggled to work out where the bags of cable ties came from, each suggesting workmen had left them behind years earlier.

But Roy later told jurors he bought the cuffs on eBay as part of an ultimately abandoned plan to go into part-time security work.

He said his father became angry after seeing them strapped to Kennedy’s wrists and they were never reapplied after Kenneth angrily demanded they be taken off.

Roy told jurors he ‘panicked’ at hearing the police would be called and threw them over the back garden fence because he was unsure whether it was legal to own them.

Mr Little said the trio’s claims that Kennedy was only held down temporarily were ‘incredible’.

The other four siblings all made the same ‘tactical choice’ not to give evidence and be subjected to the same scrutiny, Mr Little added.

Kenneth, Josephine, Roy, Harry, Colin, Daniel and Samuel, all of Barnet, north London were all cleared of denied manslaughter, false imprisonment and causing or allowing the death of a vulnerable adult between 19 and 23 August 2016.

Kennedy was pronounced dead after Harry Ife called 999 on August 22, saying his brother had been complaining of dehydration.