Donna Harrold said she didn't hear the cries for her family to get away from the burning car. She didn't know how high the flames had gotten. Her mind was solely on saving a trapped driver minutes away from burning to death.

Mrs Harrold was about to start Christmas dinner at her Silvan home on Friday evening, when she and her family heard an almighty noise.

"Crash, such a loud bang, and we didn't hesitate, we all just jumped up at the same time and ran out. It was so loud – you could just tell it was going to be bad," Mrs Harrold said. 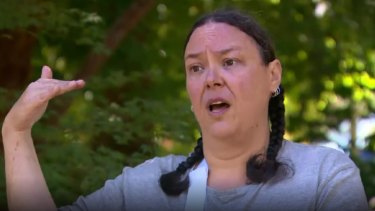 Donna Harrold helped rescue a man from his burning car at Silvan on Christmas Day.Credit:Nine News

The driver, a man in his 50s, was travelling around a bend when the car lost control and hit a tree on Parker Road in Silvan, 40 kilometres east of Melbourne, just after 6.30pm on Christmas Day.

After calling triple zero and talking to the CFA, Mrs Harrold started talking to the trapped man, yelling at him that he had to get out of the car. She was joined by a family of off-duty police officers, who were set to celebrate Christmas at a nearby home.

"He was just incoherent … he could see the airbags had gone off and the dash was pushed up, but said he couldn't move. The fire was in the engine," she said.

"We couldn't open the doors. At that point I moved away and he started screaming – so we knew he was on fire. The flames just went so quick."

With flames licking high up on the tree he had crashed into, the driver was soon dragged from the car via the window. His legs were still engulfed in flames when he was pulled out.

The man was airlifted to hospital in a serious but stable condition. Mrs Harrold was also taken to hospital with burns.

Detective Sergeant Steve Harris was off-duty, heading to his family's Christmas dinner, when he was flagged down to see if he had a fire extinguisher to help put out the fire.

As he made his way down the the burning car and bush surround it, his wife made the call to their two sons – also both off-duty police officers – who were at the same gathering. 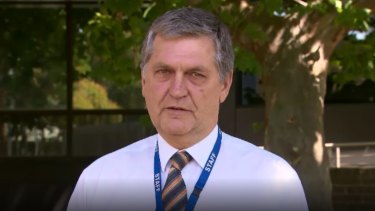 Detective Sergeant Steve Harris from the Maroondah Crime Investigation Unit, who along with a local woman, saved a man from a burning car after it crashed into a tree in Silvan on Christmas Day.Credit:Nine News

"The driver was behind the wheel, the fire was in the engine bay and he was not responding to any requests to try and help himself to get out of the car," Detective Sergeant Harris said.

He said it was proving "difficult" for them to get the man out of the burning car, and the off-duty cop feared the driver would not survive.

"The situation became pretty dire as the fire entered the cabin. At one stage I thought he wasn't going to make it, we wouldn't be able to get him out because he legs were trapped.

"It was a pretty close call… but we couldn't see him burnt to death in front of us in his car, we had to do something.

"We literally pulled him out of the driver's side window, the doors were both jammed, but we got him out and got him on the ground. He had some pretty nasty burns to his legs, but otherwise it wasn't too bad."

Detective Sergeant Harris said his two sons carried the injured man away from the vehicle at just the right time: there were explosions from the car not long after he was pulled out.

"He was extremely lucky – he was literally moments away from death. I'm very proud of my sons – it certainly wasn't the Christmas gathering we were expecting."

The police officer said Ms Harrold had been "very brave" in her determination to get the man out safely.

"It really makes you realise that there's some great people out there willing to help others."

Through tears, Mrs Harrold said she didn't for one second think about her own safely, "he was screaming, I couldn't leave him there,"

Christmas, F---, Heroes, man, pulled
You may also like: