Follow
Home » World News » Clash of the dynasties: Pilbara’s role as kingmaker for nation’s wealthy makes it a risk worth fighting over

Clash of the dynasties: Pilbara’s role as kingmaker for nation’s wealthy makes it a risk worth fighting over 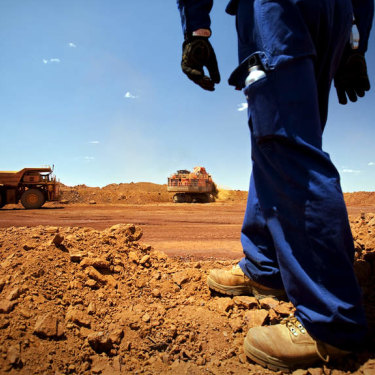 The legal war being waged by Wright Prospecting over Pilbara iron ore tenement Hope Downs, coupled with its acquisition of Rhodes Ridge, has the capacity to reshape WA's mining landscape for generations to come.

Wright Prospecting is chasing a 25 per cent stake in the Hope Downs 4, 5 and 6 mining tenements – currently split 50/50 between Hancock Prospecting and Rio Tinto – as well as half the royalties from Hope Downs 1, 2 and 3.

Together, that could more than treble its annual fortune with billions more in potential future earnings, since tenements 2,3,5 and 6 have yet to be mined.

"If they were to win a greater share of royalties, and Wright Prospecting makes significant profit already (at $200 million a year), it gives them the resources where they could chose to be more active within the Pilbara and shape the region rather than just accrue royalties," Dr Barratt said.

"However it would be a corporate strategy decision of that company as to whether they chose to do so or not."

In revisiting the legacies left by Lang and his business partner Peter Wright, Wright Prospecting managed to wrest untapped ore reserve Rhodes Ridge from Mrs Rinehart’s company in 2010, which it now owns in equal partnership with Rio after also being awarded $1 billion in backdated “damages” from Hancock’s sale to Rio.

Rhodes Ridge, which sits just south of Hope Downs, holds an estimated 5.3 billion tonnes of iron ore at grades of up to 65 per cent – a rarity for new mines.

So much so even Andrew 'Twiggy' Forrest, whose $20-billion ore wealth nips at Mrs Rinehart's heels, wanted to have a crack at it, with Fortescue Metals Group having planned to mine the ridge, via junior miner Cazaly, until the courts ruled against it.

Dr Barratt, whose research includes the history of the Pilbara, said BHP's Jimblebar mine, which was brought online in 2014, held ore reserves of 172 million tonnes – so 5.3 billion tonnes was a very large ore footprint.

"Having access to future extractive capacity is very important in terms of medium and long term economic sustainability of the companies," he said.

"As new mines are constructed there are efficiency gains … so new mines that open up could be more profitable than existing mines."

Which means Rio's production costs of $14-$15 per tonne are only set to improve, further increasing its 72 per cent iron ore operating profitability (which was its reported earnings before interest, taxes, depreciation, and amortisation margin for the first half of this year).

Sixty-three per cent of Rio's $US19 billion portfolio is reliant on iron ore.

Last year, Rio Tinto was granted a state government permit to clear up to 200 hectares of native vegetation within a boundary of about 1656 hectares at Rhodes Ridge.

But the capital outlay, while it has six other projects coming online, means a Rhodes Ridge mine remains a distant project. 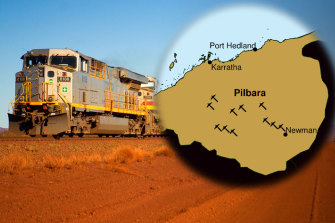 Major iron ore projects in WA's Pilbara have the potential to reshape the power dynamics in one of the country's richest mining regions.Credit:WAtoday

Expansion plans that will benefit both Wright Prospecting and Hancock Prospecting in the near future, however, include the $800 million going into Western Turner Syncline to help boost Tom Price production, and the $2.6 billion Koodaideri mine, that will produce up to 43 million tonnes of iron ore a year from 2022, where a “royalty is payable”, according to Supreme Court documents.

Dr Barratt said the sheer volume of ore meant even marginally increasing a stake in an operation would deliver so much money it would increase the power of any of the stakeholders involved.

While iron ore prices fluctuate and are priced in US dollars – making the value of tenements difficult to estimate, this year’s ore price of $US120 a tonne (or about $170) helped shoot Mrs Rinehart to the top of Australian Financial Review’s rich list with a personal wealth of $21.2 billion.

Last year, Hancock Prospecting declared $2.6 billion net profit when iron ore was starting to ramp back up to $US94 a tonne.

This year’s ore price high of $US120 a tonne helped Wright Prospecting declare $204 million net profit in 2020, which is purely passive income from Rio royalties for Wright heiress Angela Bennett and her nieces Alexandra Burt and Leonie Baldock.

It also helped bump Mrs Bennett into this year’s richest top 20 with a fortune of $3.3 billion.

Rio currently provides royalties from 10 of its 16 mines under a series of agreements with Lang and Peter’s Hanwright partnership. 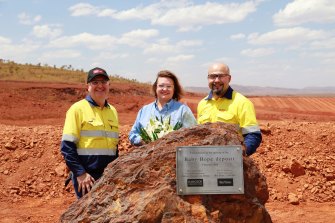 In 2013, backed by the High Court two years later, the Supreme Court awarded Wright Prospecting and Hancock Prospecting more than $100 million each in backdated 2.5 per cent royalties for ore produced from an additional six pits at Rio Tinto’s Channar and Eastern Range mines, with ongoing royalty rights over nine pits in total.

That was based on a 1970 sale agreement struck between Hanwright and Rio's subsidiary company, Mount Bruce Mining.

It was a rare show of unity for the companies, which were already embroiled in one of the state's biggest civil clashes over Hope Downs.

Hope Downs remains, for now, the jewel in Mrs Rinehart's multibillion-dollar crown, and arguably in Rio's as well.

And Mrs Rinehart will not part with a single particle of ore dust more on this bloodless yet red-stained Pilbara battlefront, with her company Hancock Prospecting telling WAtoday that since she assumed control in the 1990s, she had increased the value “25,000 per cent”.

When Lang died, his estate was bankrupt and the company had to take out a bank loan to pay back an overseas business transaction, which took another eight years to pay off, a spokesman said.

“In addition, Hancock Prospecting – which he'd effectively sold out of (other than a few special shares, with no other rights except in case company liquidated) – was in an extremely bad financial situation at time of his death in March 1992, with the few remaining assets under litigation or threat of litigation or heavily mortgaged,” he said.

“Tenements to Roy Hill were not in the company when Lang Hancock was alive – these were acquired the year after his death.”

An early estimate for Roy Hill, which is 70 per cent controlled by Hancock, was $US10 billion.

It has become Australia’s single largest iron ore mine, producing 55 million tonnes of ore a year, according to Hancock’s website. But its profits have been reinvested in paying down debts, according to the company’s 2019 financial statement.

It does not form part of the litigation with the Wrights but does form part of a family dispute in which Mrs Rinehart’s son John Hancock and daughter Bianca Rinehart have sought a greater share of Hancock Prospecting and sole control over Hope Downs in the Federal Court.

clash, Dynasties, of, Pilbar, the
You may also like:

'Protect the NHS slogan was not helpful': Senior GP says

Was agent Stakeknife a hero or a renegade?

Here, there, everywhere: The frantic last dash for the White House

‘Words have consequences’: Turkey’s Erdogan cited in wave of deaths in France