A CLUBBER who went to Ibiza, failed to isolate on his return and then threw a house party, is feared to have sparked a Covid spike in Bolton.

Layton Migas, 23, went to the Spanish island for his summer holidays, returning on August 20. 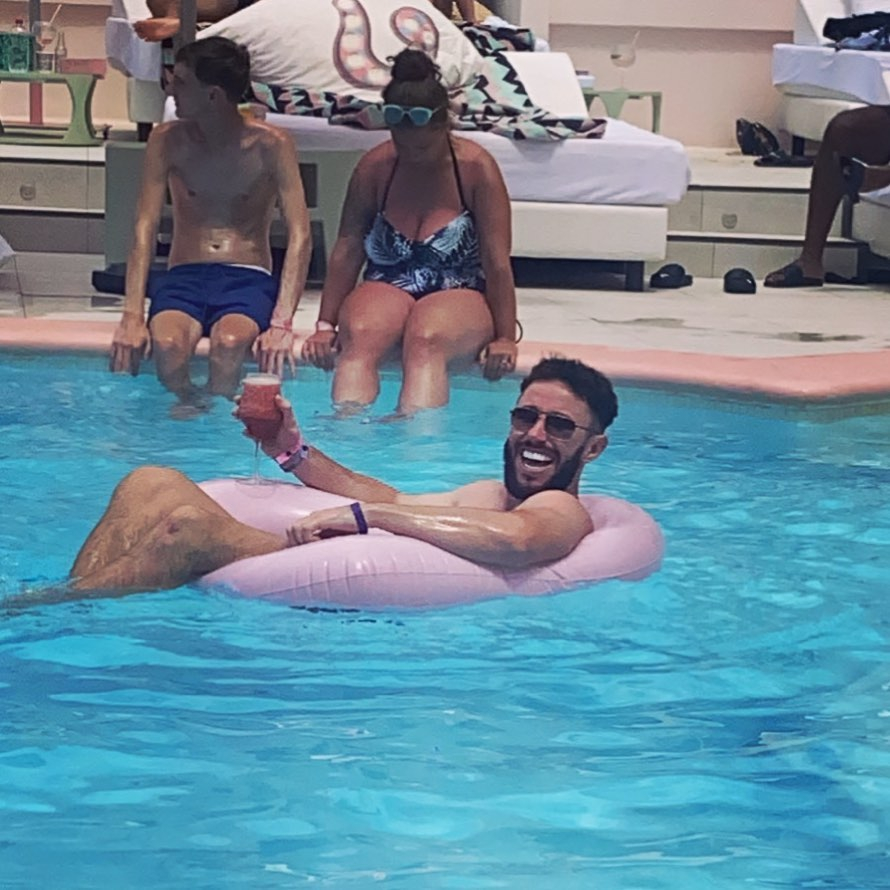 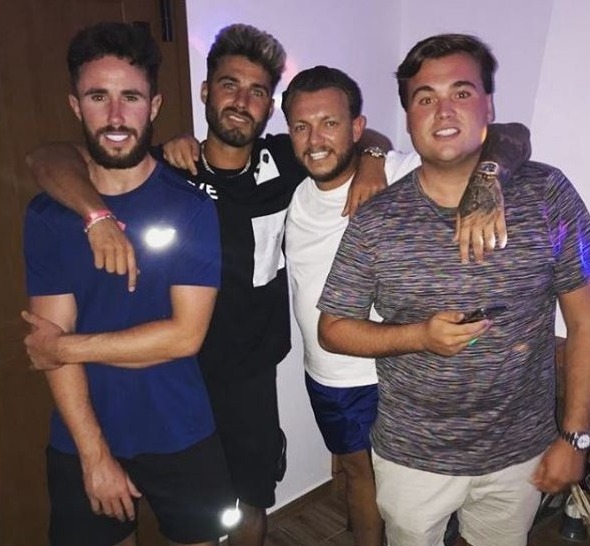 Under the Government rules, he should have quarantined for a two-week period at his home in the Lancashire town.

But instead the Covidiot left his home on several occasions to go to the shops, and even threw a house party attended by his pals.

Migas was fined £1,000 after Gtr Manchester Police learned of the breaches and tracked him down a few days later.

Today Migas confirmed he had been fined after spending six weeks in Ibiza before returning home.

His Instagram account shows him lying in a pool with three girls and another clip shows him having champagne poured down a girl into his mouth on a party boat.

Migas, who also partied with EastEnders star Dean Gaffney at another illegal lockdown party in June, moaned: “I’d say I have definitely been scrutinised for being a young person.

“They wouldn’t have known. It’s only the neighbours that have told them.

“There’s loads of people I know who didn’t quarantine.

“What I actually got done for was that I was partying but I was actually in my house with the people I had been on holiday with.

“There was only me and two others.

“They knocked on my door and said I’d not been at my house when I actually had been in the house.

“They had been at 9am and 1pm and I said I was asleep.

“It is pretty harsh. There is no payment plan, you literally have to pay the £1,000 or go to court.”

He admitted he had not had a test because the one he was offered was 14 miles away which he claimed was too far away to drive.

“I’ve not had any symptoms,” he said. “I did actually want to go for a test but there wasn’t any in Bolton and the next nearest was Blackburn. It’s a long way to drive if you know you’re not ill.” 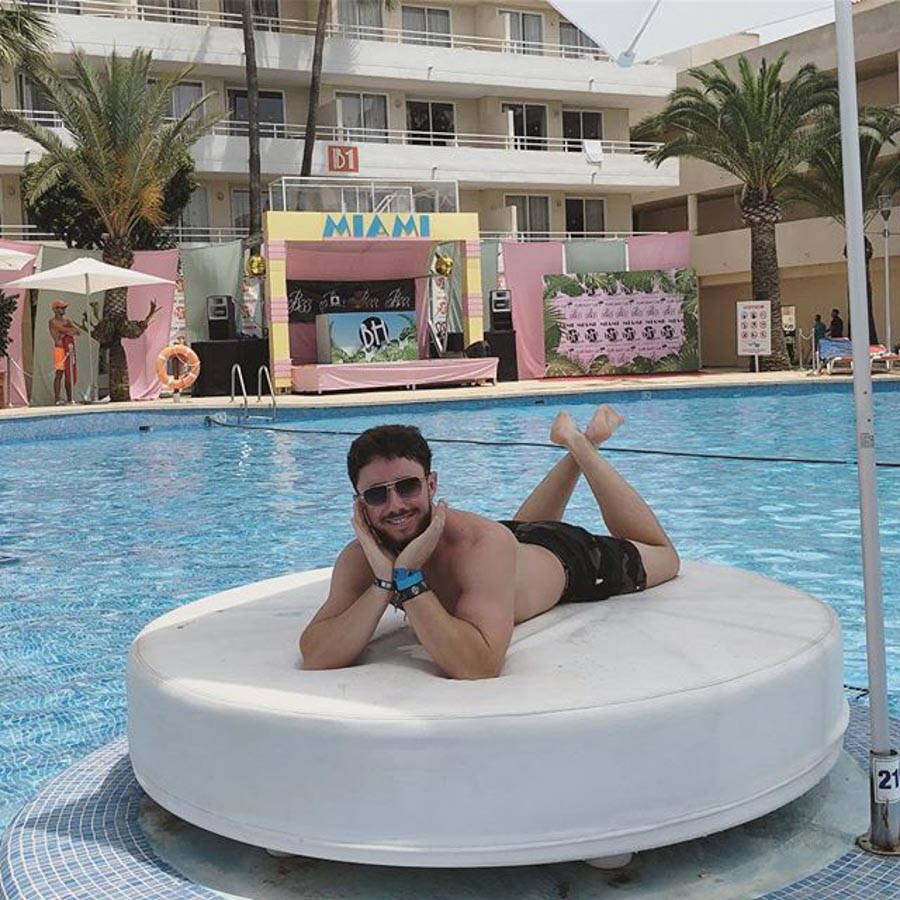 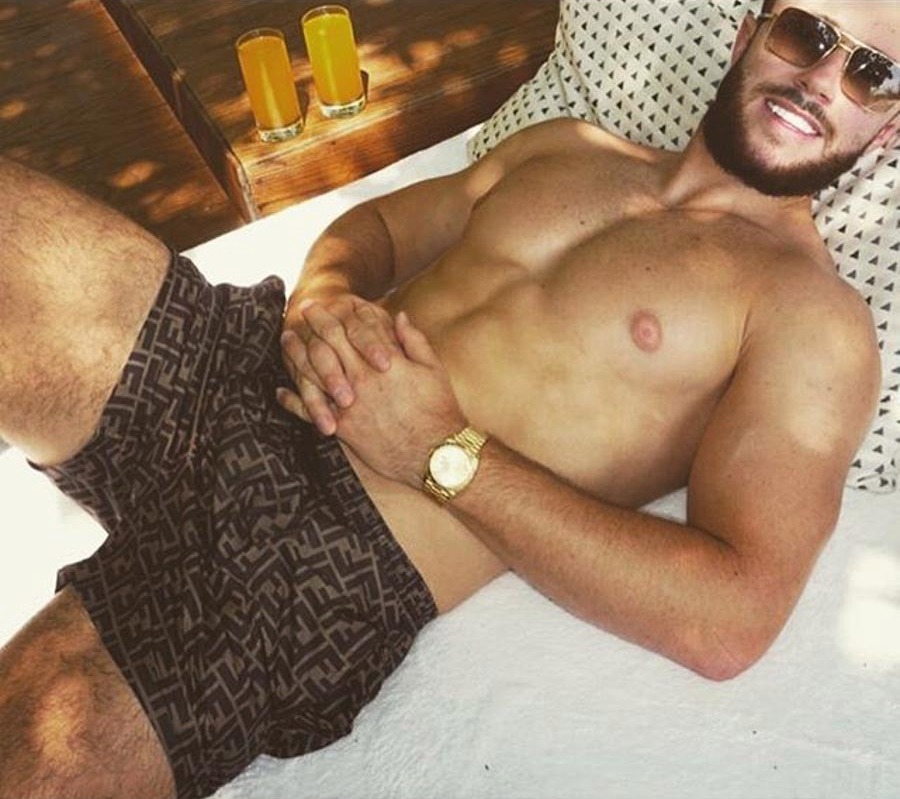 And despite the fine, Migas posted on Instagram that he had organised another party in Manchester for Saturday night, which is also a breach of coronavirus lockdown rules in Bolton.

Bolton is now the Covid hotspot of the UK with an infection rate of 160 per 100,000 people, according to figures from Public Health England for the last seven days.

The town had 462 new cases recorded in the week to September 7 – the equivalent of 160.7 per 100,000 people – higher than the peak which saw Leicester placed into lockdown.

This is the highest rate in England and it is up sharply from 80.0 in the seven days to August 31.

Bolton West MP Chris Green said he had been told health experts fear one of the factors behind the spike is an infected holidaymaker failing to isolate on his return to the town.

Mr Green said: “The only suggestion I’ve heard so far to what’s happened in Bolton is that someone who had been on holiday in Spain, came back, didn’t go into quarantine.

“He had coronavirus, went on a pub crawl. That’s so far the only explanation of a contributory factor in Bolton.

“But I’m not sure that’s the whole story. I think there’s far more than that and the source of these figures in Bolton needs to be found as soon as possible.

“The data shows the rate of transmission has rocketed up, we are not quite sure at the moment why it has rocketed up but it has, I think people want the pragmatic decision to say the facts have changed and the data shows we should remain in lockdown, that’s the right decision.”

Chief Inspector Nicola Williams, of GMP, said: “The actions of this man were completely irresponsible, not only was he leaving the house while he should have been self-isolating, he also held a house party, which breached further regulations and subsequently put others at risk.

“Our action towards this individual should serve as a stark warning to any others who believe that they can blatantly ignore Covid-19 regulations without consequence." Bolton health chiefs say people aged between 18 and 49 represent the “overwhelming majority” of new cases. 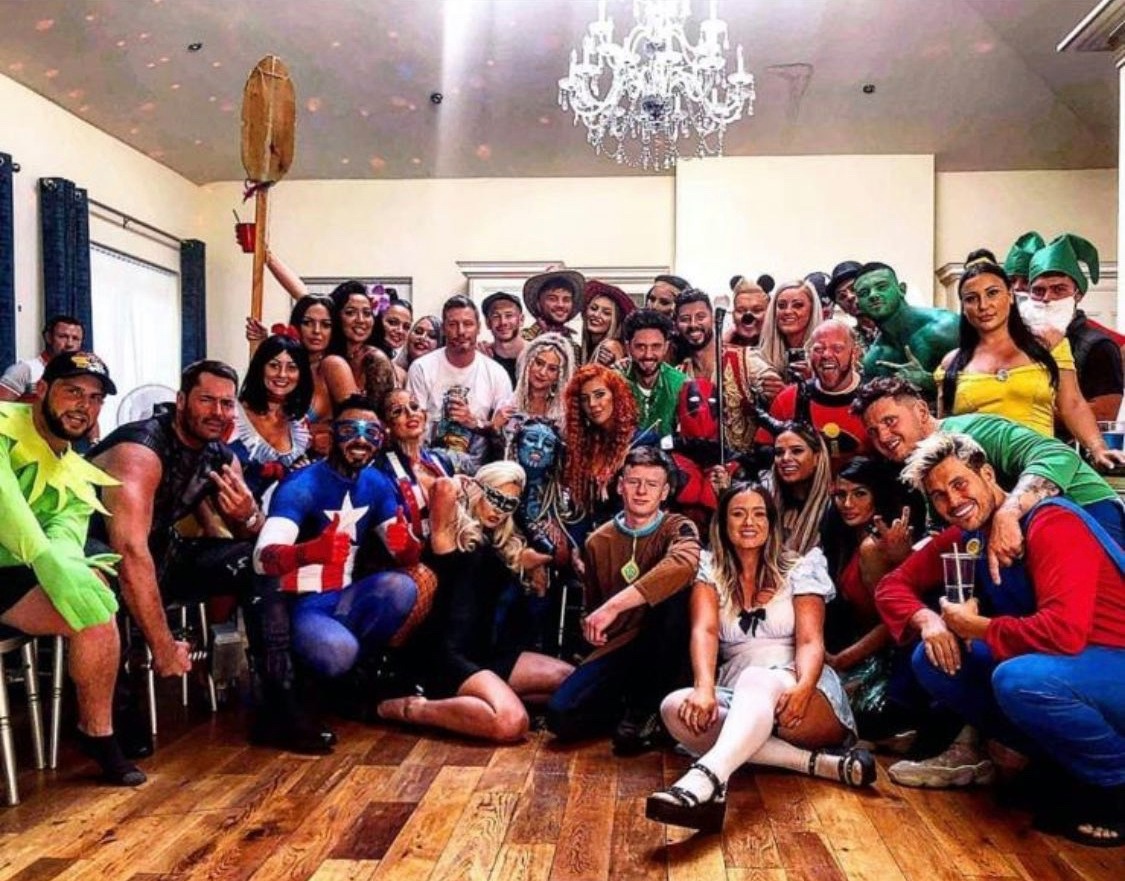 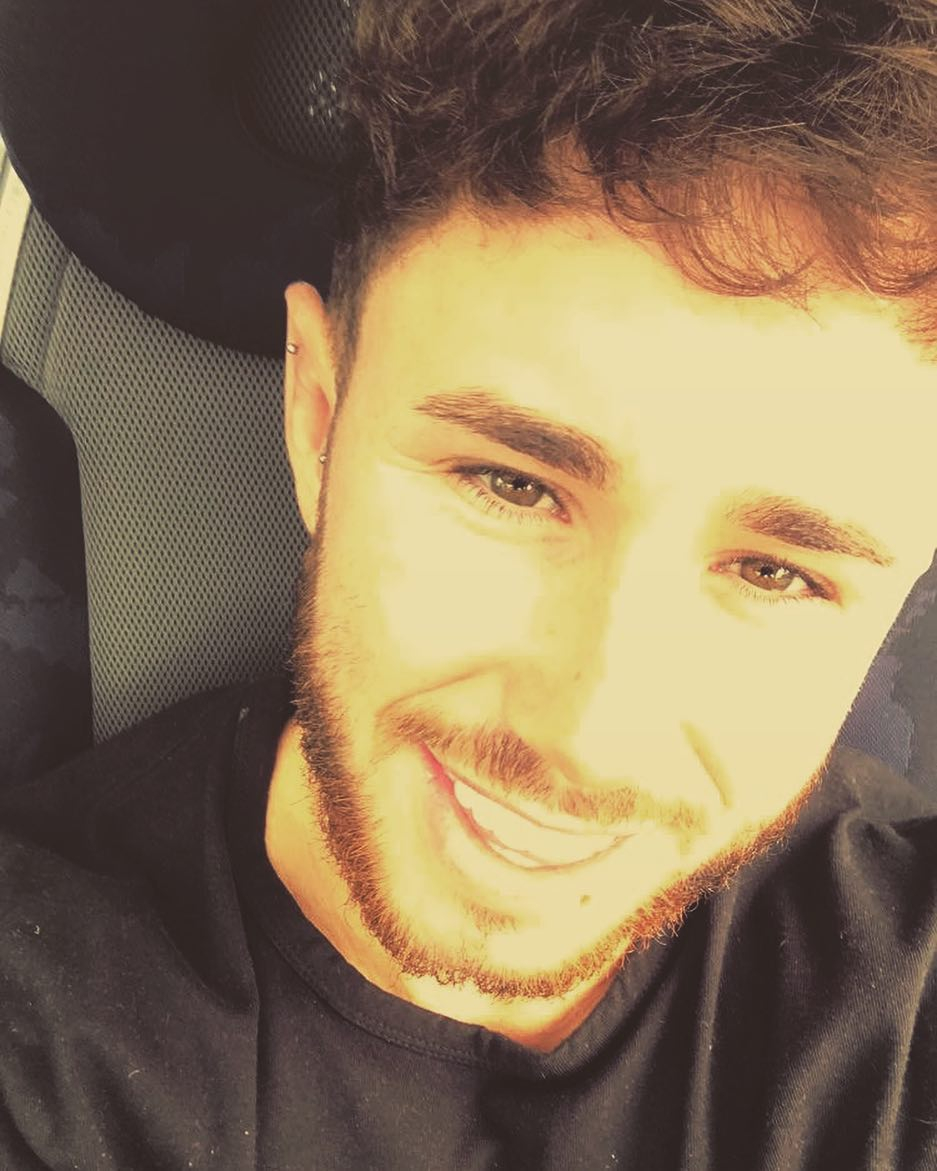 Bolton council’s Director of Public Health Dr Helen Lowey warned residents need to adhere to social distancing and socialising rules “otherwise we will face even more restrictions and that is the last thing we want. But we will be left with no choice if the rate continues to increase."

Earlier this week new restrictions were introduced in the town to try to curb the rising R rate.

All hospitality businesses in the town can only open for take-away – with all venues required to shut by 10pm.

Bolton Council Executive Cabinet Member for Environment Services Regulatory, Cllr Hilary Fairclough, said: “The police have imposed a hefty fine on this individual which I believe the public would agree is the right thing to do.

“The actions of this holidaymaker were selfish and irresponsible, and he has put himself and others at risk by failing to self-isolate when returning from his holiday to Ibiza.

“The government has imposed a 14-day quarantine requirement on anyone returning from a trip to Spain, and other destinations, for good reason and this has been well publicised.

“The rule is there to help us get a grip on the rising Covid-19 case numbers and help save lives. The vast majority of Bolton residents are doing their bit to abide by the rules even though this means being parted from loved ones for long periods of time.

“So it is disappointing that some people choose to take such a selfish attitude believing that the rules don’t apply to them.”

A couple in nearby Chorley, Lancs, were also hit with a £1,000 fine, cops revealed today.

They issued them with a penalty notice after they returned from the Canary Islands and failed to quarantine for 14 days.

Lancs Police said: “We have recently issued a £1,000 fine to a couple from Chorley who had returned from The Canary Islands but then failed to quarantine for the required period.

“We don’t take these decisions lightly but we must be clear that Lancs is in the midst of a pandemic.

“The regulations are there to prevent the virus spreading, protect people’s health, and keep everyone safe and we won’t hesitate to enforce where we need to.

“We will continue to engage with people and explain the rules, but we will enforce them and issue fines.”

Clubber, Ibiza, then, to, went, Who
You may also like: