London: The head of the world's largest business organisation has defended employers who publicly advocate for action on diversity and climate change, arguing workers are "crying out" for leadership and boardrooms must have a "bigger purpose than just profit".

John Denton, the first Australian to be appointed secretary-general of the Paris-based International Chamber of Commerce, said critics of corporate activism also failed to recognise that small businesses – not just major firms – were some of the most enthusiastic backers of a stronger response to global warming.

"A number of shock jocks and political commentators seem to run this 'stick to your knitting' line but it's just completely ridiculous," Denton said. 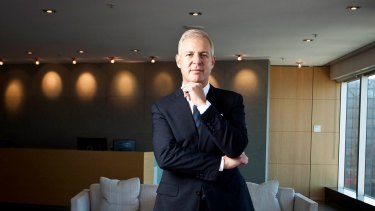 John Denton has moved to Paris to lead the International Chamber of Commerce. Credit:Arsineh Houspian

"This is our knitting. Business doesn't operate in a bubble. Business operates in the environment and it operates in a community and it has a legitimate interest in these things.

"There is an expectation by employees that, in the absence of leadership from the political class, the leaders of business should stand up."

Some government MPs are unhappy that businesses were major participants in the 2017 same-sex marriage plebiscite but did not do enough to publicly support the Coalition's ultimately doomed plan to cut the company tax rate.

The Business Council of Australia is also advocating for a national target of net zero emissions by 2050 – a policy the government views with heavy scepticism.

In an interview with The Sydney Morning Herald and The Age, Denton said the ICC had an "absolute, explicit" commitment to global climate goals of limiting temperature increases to 1.5 degrees and achieving net zero emissions status within three decades.

Denton was the former chief executive of law firm Corrs Chambers Westgarth for many years before he was appointed ICC secretary-general in 2018. The ICC represents more than 45 million businesses across 100 countries and holds observer status at the United Nations – a world first for a business organisation.

"Public trust in the media and politicians is low and the truth is it's also quite low for business, Denton said. "But to me, that means the opportunity for CEOs and the business class to actually help create leadership is very high.

"Public policy is better when the private sector's voice is there. But to enable the private sector to have that voice, you have to be mindful that we have to earn that right with civil society to participate. That's why it's so important to have a bigger purpose than just profit."

The nationwide poll of more than 3000 people for the Committee for the Economic Development of Australia last year found more than 70 per cent of respondents agreed large companies should place equal importance on economic, environmental and social performance.

Denton said Australia looked at climate change too heavily through the political prism and risked being left behind by major market and technology shifts.

"I'm looking at this issue outside the boxing ring of Australia and what I have discerned is big change.

"At its heart, the solution to this will probably come from a combination of the extraordinary innovation that will be unleashed by continuing operation of the market economy and new technology.

'The government plays a role, the government sets the rules, but any rule maker is better informed when the private sector, the actual people who deploy it, are engaged."