A senior constable from Pakenham has been sacked by Victoria Police over allegations he covertly filmed his wife's former friend in the shower, but criminal charges against the disgraced officer were dropped despite compelling evidence.

The withdrawal of charges has infuriated the alleged victim, who is considering launching civil proceedings against the force. 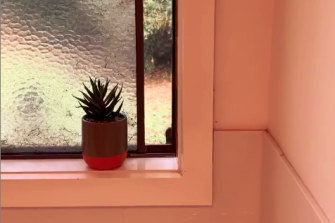 A screen grab taken from footage showing what is believed to be the former police officer’s mobile phone being used to film the woman through a bathroom window.

The woman, who has asked not to be identified, made an official complaint to police at Cranbourne station on June 13 last year, and the officer was charged with several offences in October last year.

However, the charges against the senior constable were withdrawn in May this year, while the woman is still attempting to take out an intervention order against the disgraced officer.

A Victoria Police spokeswoman refused to explain why the legal case against the officer had been dropped.

"A male senior constable from the Southern Metro region was charged with use optical surveillance device offences in October 2019. The charges related to an incident in May 2019 while the member was off duty, however, were later withdrawn at court," the spokeswoman said.

She confirmed he had been dismissed in September following a hearing by Professional Standards Command.

Gregor Husper, principal lawyer with the Police Accountability Project, said he was baffled by the decision to drop the criminal charges.

"It's hard to imagine a case where you could have stronger evidence. We need to start sending a message that we are not going to tolerate this type of sexualised violence against women, particularly by members of Victoria Police," Mr Husper said.

"It's not sufficient that they [police] simply lose their job. They should face the justice system like anyone else."

cop, filming, over, sacked, wife’s
You may also like: