COPS have been caught on camera raving and skateboarding with Extinction Rebellion protesters – as the eco-warriors took over a SECOND bridge in London today.

Video has emerged of officers dancing with campaigners in Oxford Circus and skateboarding on Waterloo Bridge as the activists blocked Vauxhall Bridge this morning. 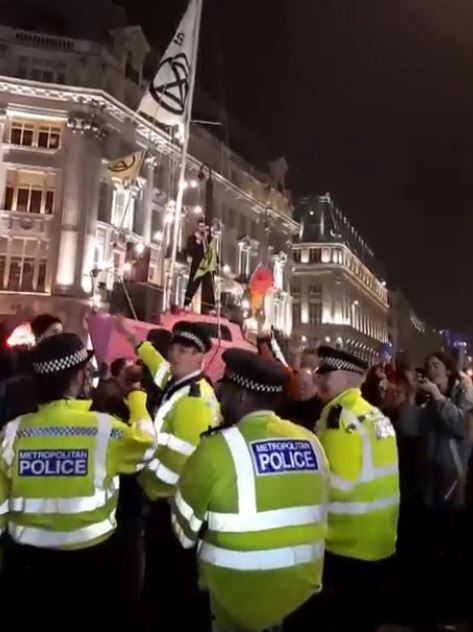 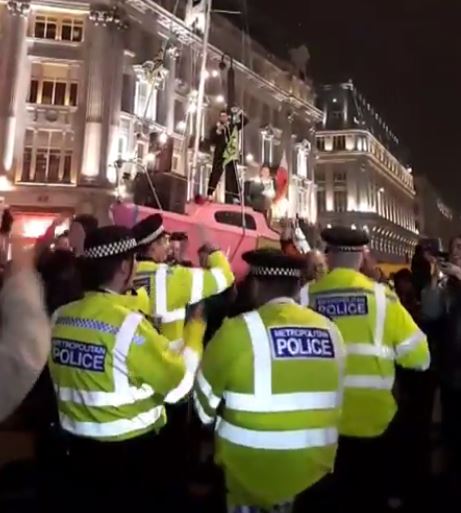 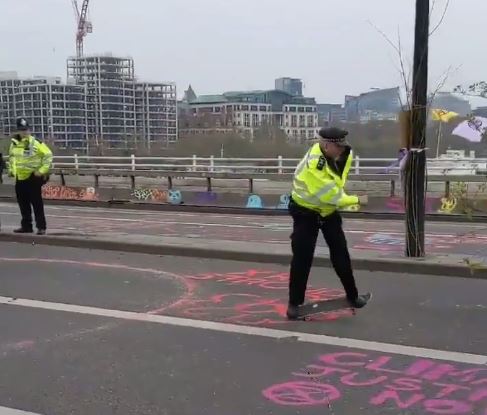 Extinction Rebellion started demonstrating in the capital on Monday leading to hundreds of arrests, but the group remains determined to continue the mayhem.

The eco-warriors have taken over several main spots in London, with a large contingent parking a massive pink boat in the middle of Oxford Circus, and this morning blocking off Vauxhall Bridge.

Environment Secretary Michael Gove told the campaigners on The One Show last night: "I think it's appropriate for people to make their feelings known but I also think, we've got the message, we understand that action needs to be taken.

"And in fact some of the activity that's been going on on the streets has actually stopped people doing their jobs and also impeded, for example, people getting around London in way that's appropriate."

This morning the group has reportedly offered to release their grip on central London if Mr Gove comes to Parliament Square to talk to them.

Over 340 arrests have been made since Extinction Rebellion began its mass protest – with three people now charged, British Transport Police confirmed this morning.

Some were released within just a few hours without any charge as busy police cells were reportedly operating a one-in-one-out policy.

Tory MP Nicholas Soames, the grandson of Sir Winston Churchill, told the Daily Mail: "Not absolutely convinced that our excellent Metropolitan Police are at present maintaining the Queen's Peace on the streets of London.

"Absolutely unacceptable that our great city is being held to ransom." 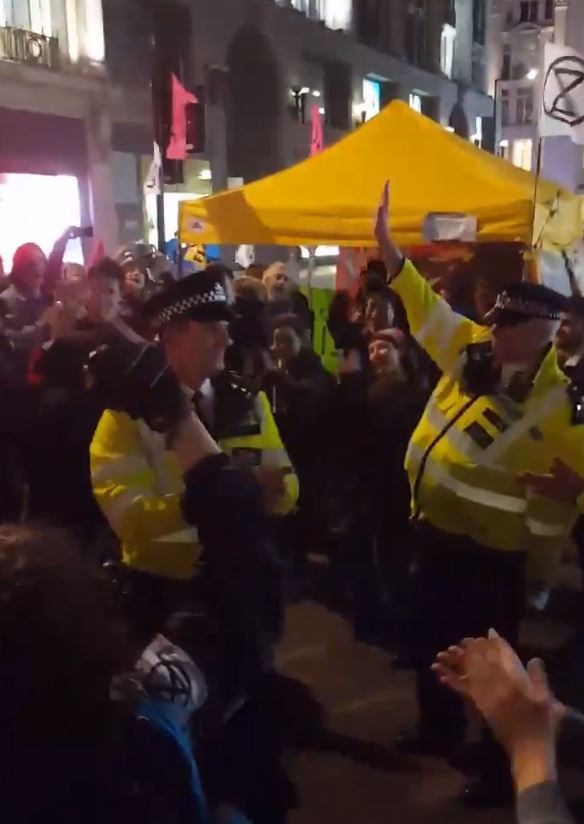 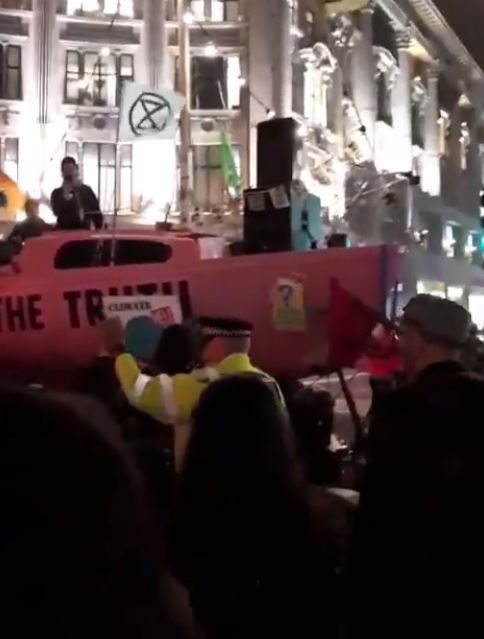 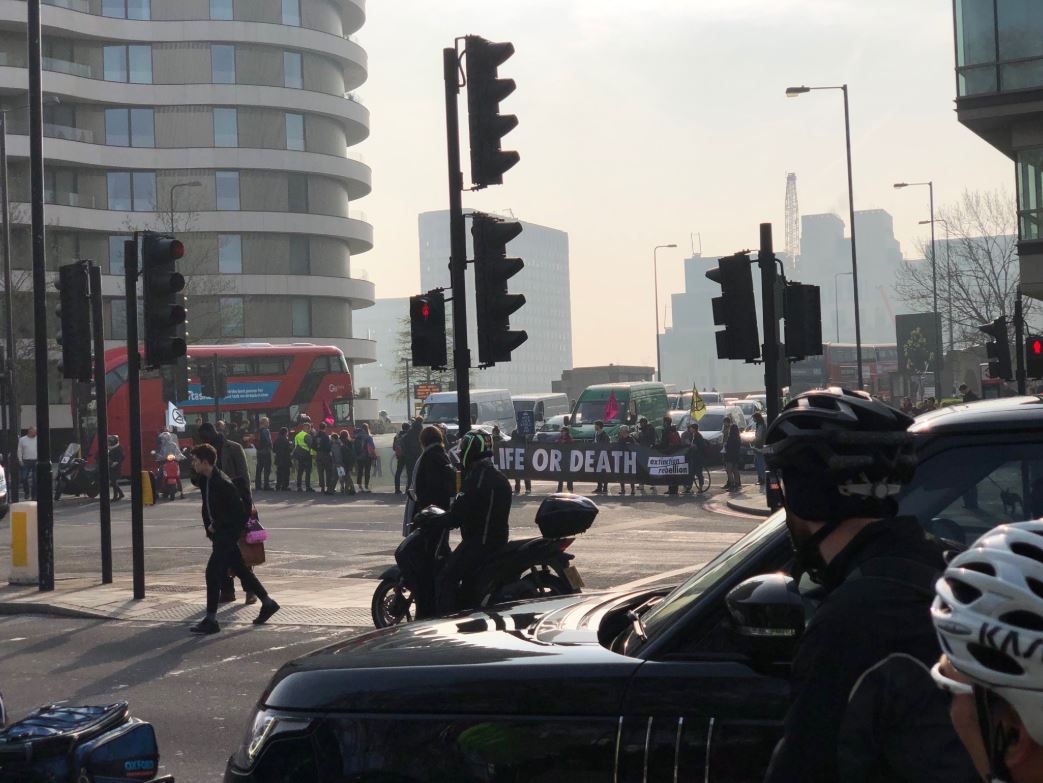 Earlier, two activists from Extinction Rebellion clambered on top of the carriage and unfurled a flag with the slogan "climate emergency" as a third stuck his hand to the window.

Angry passengers were forced off the train as the demo – which had already closed Waterloo Bridge and blocked Oxford Circus – continued into its third day.

British Transport Police eventually had to tie harnesses around the protesters who had stuck their hands on top of the train, and asked them to wear eye masks, as they removed them.

Cops in hard hats and safety harnesses were seen clambering on top of the DLR carriages to slowly haul the demonstrators down before the pair were arrested.

But while the protesters have insisted they have "no choice" but to cause disruptions, innocent locals spoke of their fury as London's West End businesses revealed they had lost £12m.

Sefan White, 24, who works for a packaging company, said: "I'm devastated. I'm trying to get to a job now. We've got to go round Camden on a 30-pub journey and we're going to be late now.

"They've had their picture, fair enough, that's all you need now. Why is he spending 15 minutes on top of the tube? Explain that."

Glue seems to be a favoured tactic of the mob, after members stuck themselves to the Shell HQ and to trucks blocking Waterloo Bridge to make it harder for cops to remove them this week.

Tony Hamon, 60, from Stepney East London, told The Sun Online: "I was on the train when they climbed onto the roof, I was shocked.

"I support it in theory but not when it disrupts me. Now there are no trains to Lewisham."

This kind of activism won't help their cause at all. It's unhelpful for other people

Peter McDonald, 60, added: "My train was diverted to Canning Town so it was disruptive.

"I was really annoyed, but they're certainly getting their point across."

Paul Middleton, pensioner, 57, added: "This kind of activism won't help their cause at all. It's unhelpful for other people. It actually disrupts people, it puts their backs up."

"It's disrupting normal people here, who can't make the changes they want.

"It's only the government who can set targets, but what these people are asking is unrealistic. Why don't they just go and protest in China or the US where emissions are much worse?"

Another woman said: "You can't just override what's going on in people's daily lives. They should protest in a proper way."

"I was on my way to open a church today and now I'm late.

"This is ridiculous. Someone gluing their hand to a train? It's dangerous more than anything else. "I support the right to protest but I think they could have done it in a different way. This is taking it too far."

Police could be heard trying to cajole protesters from the roof, telling them how much they were disrupting fellow commuters at Canary Wharf yesterday.

But the woman on the roof could be heard saying: "I don't have a choice. We have to risk this minor disruption to make things happen."

Officers then prepared ropes to bring the pair down from the roof.

Former Buddhist teacher Mark Ovland, 35, was among those to have glued his hand to the train, telling The Sun Online: "This is the biggest crisis that humanity has ever faced.

One man was arrested at Canary Wharf on suspicion of obstructing the railway and was taken into custody.

The targeting of the Docklands Light Railway comes despite the extension bringing huge environmental benefits, including around 120,000 fewer taxi rides and 288,000 fewer car journeys necessary – reducing carbon dioxide emissions by more than 156 tonnes. 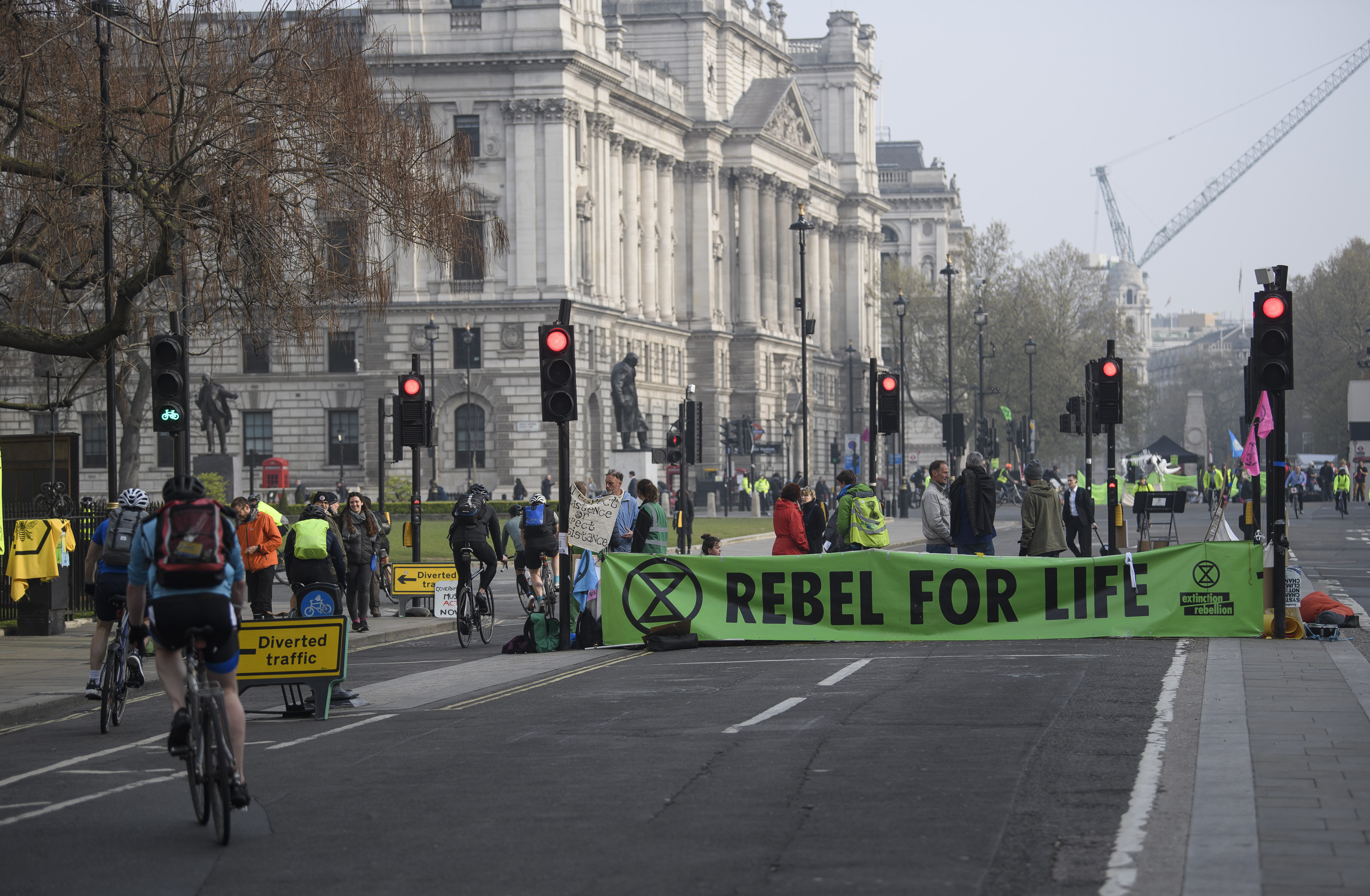 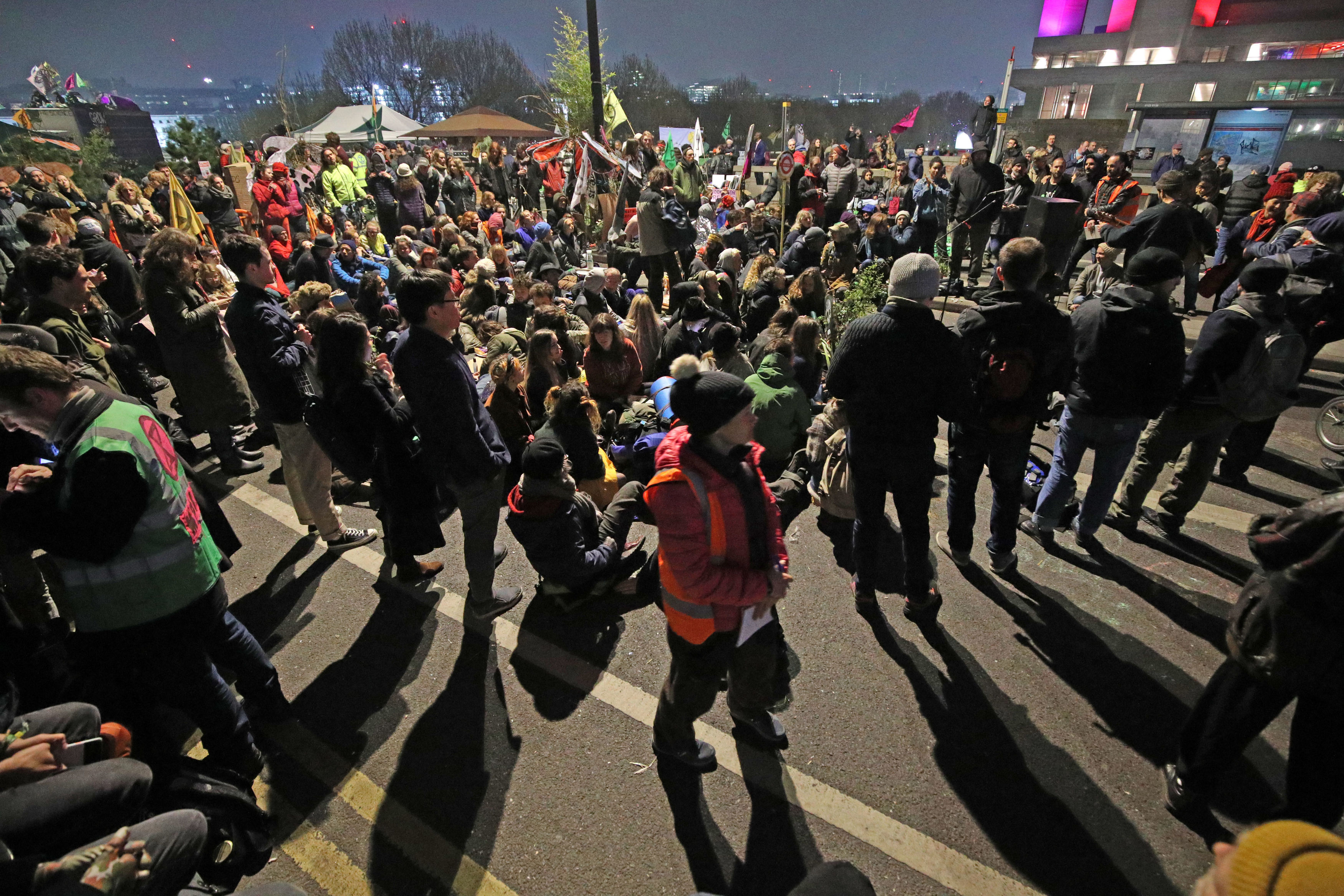 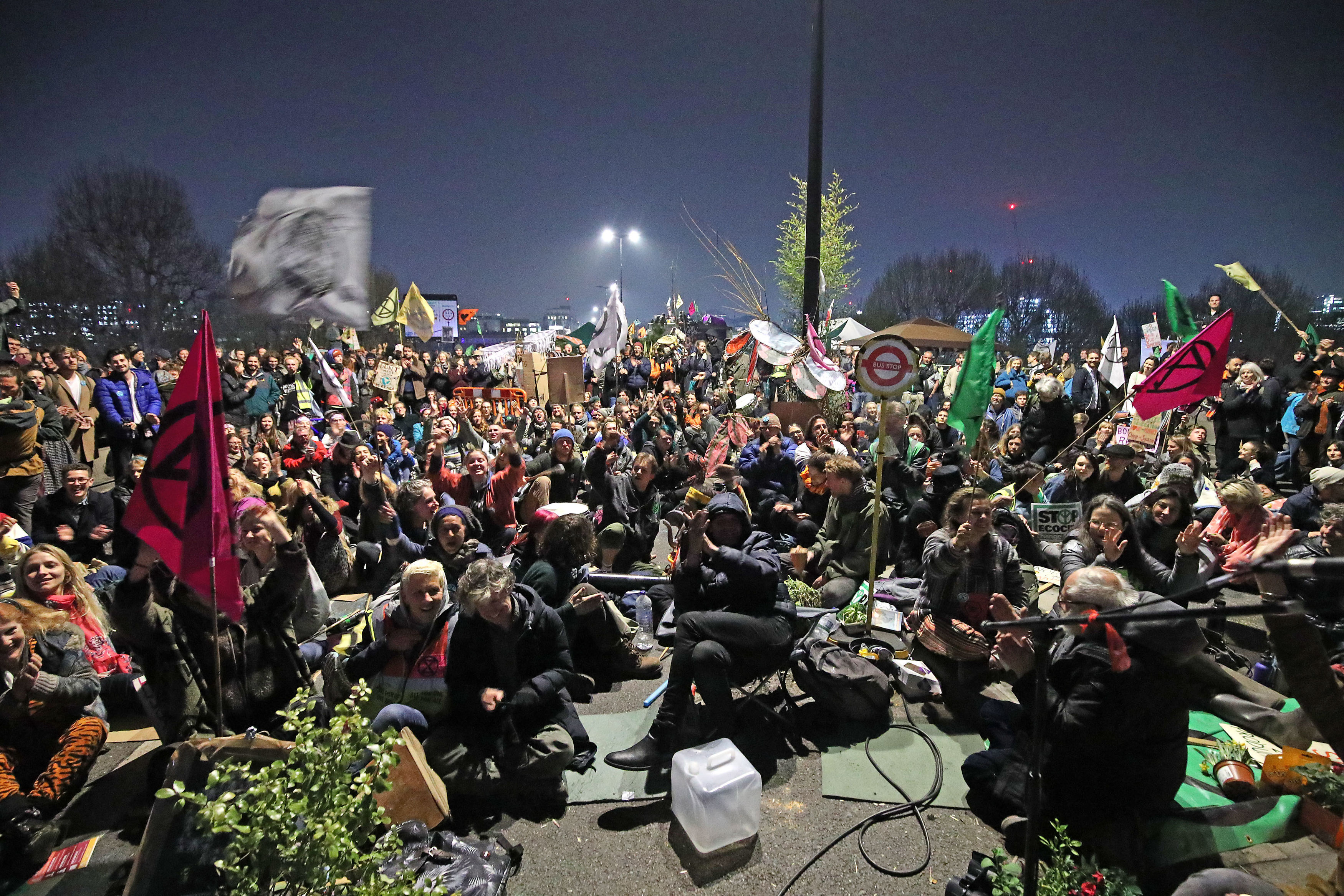 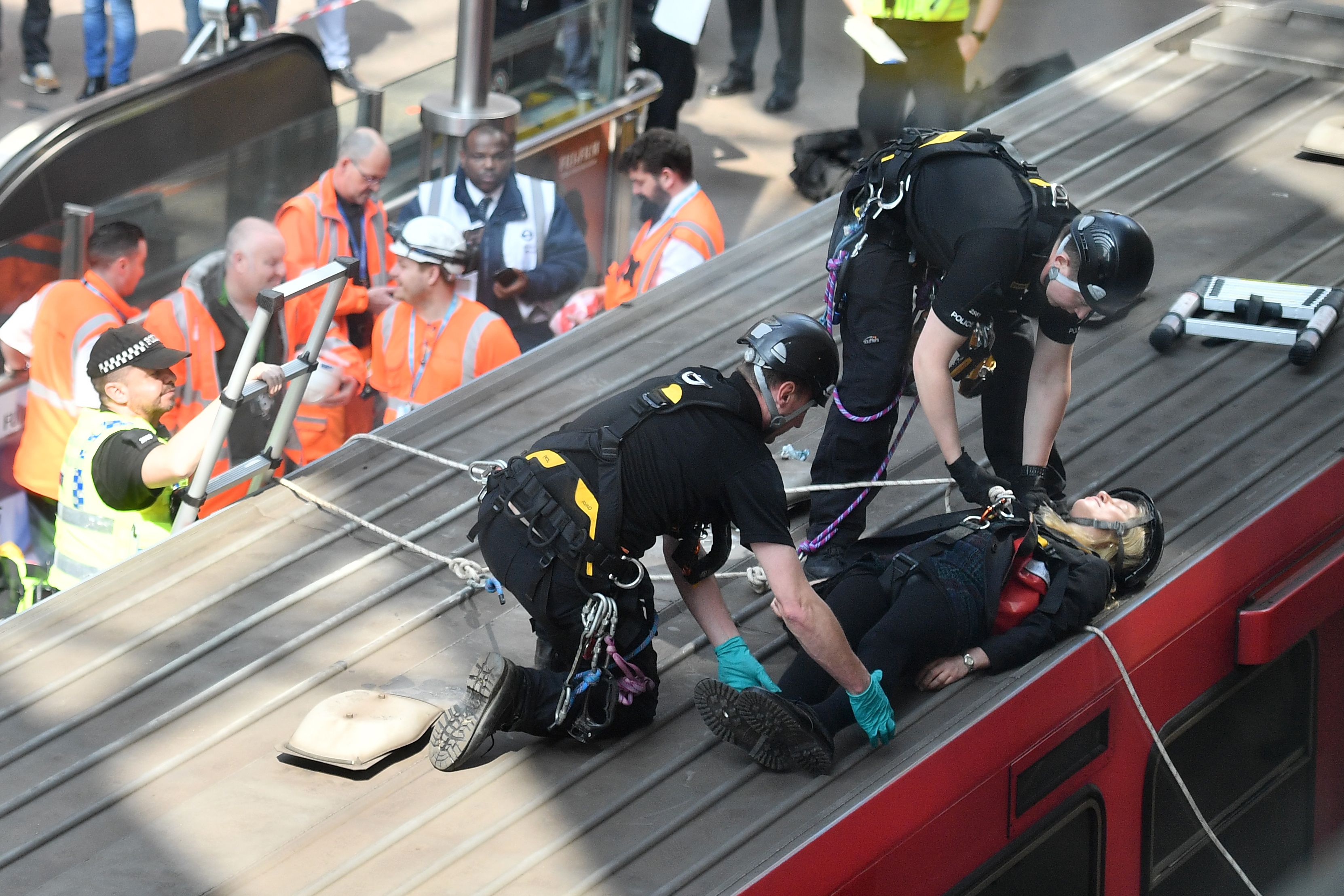 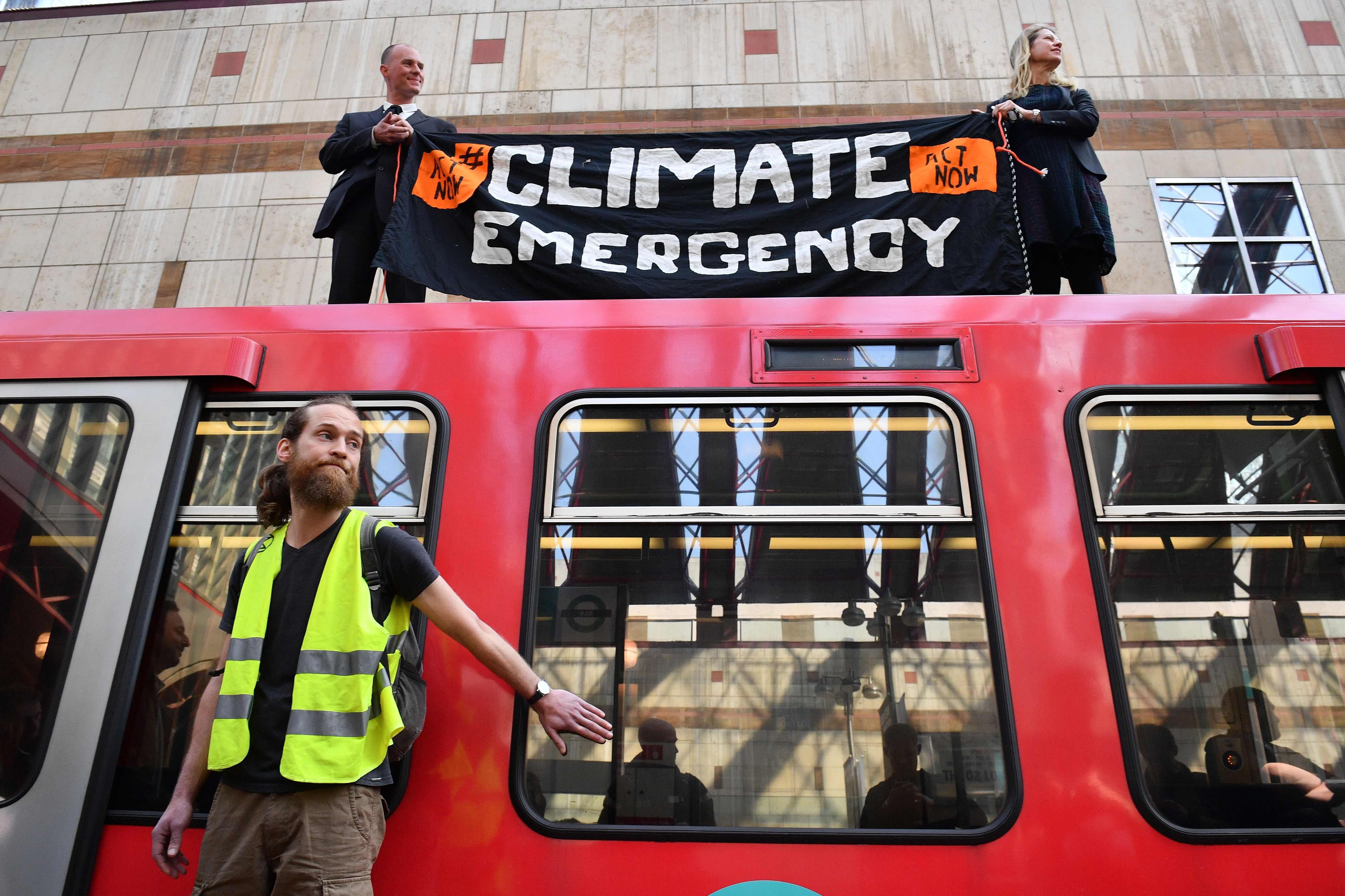 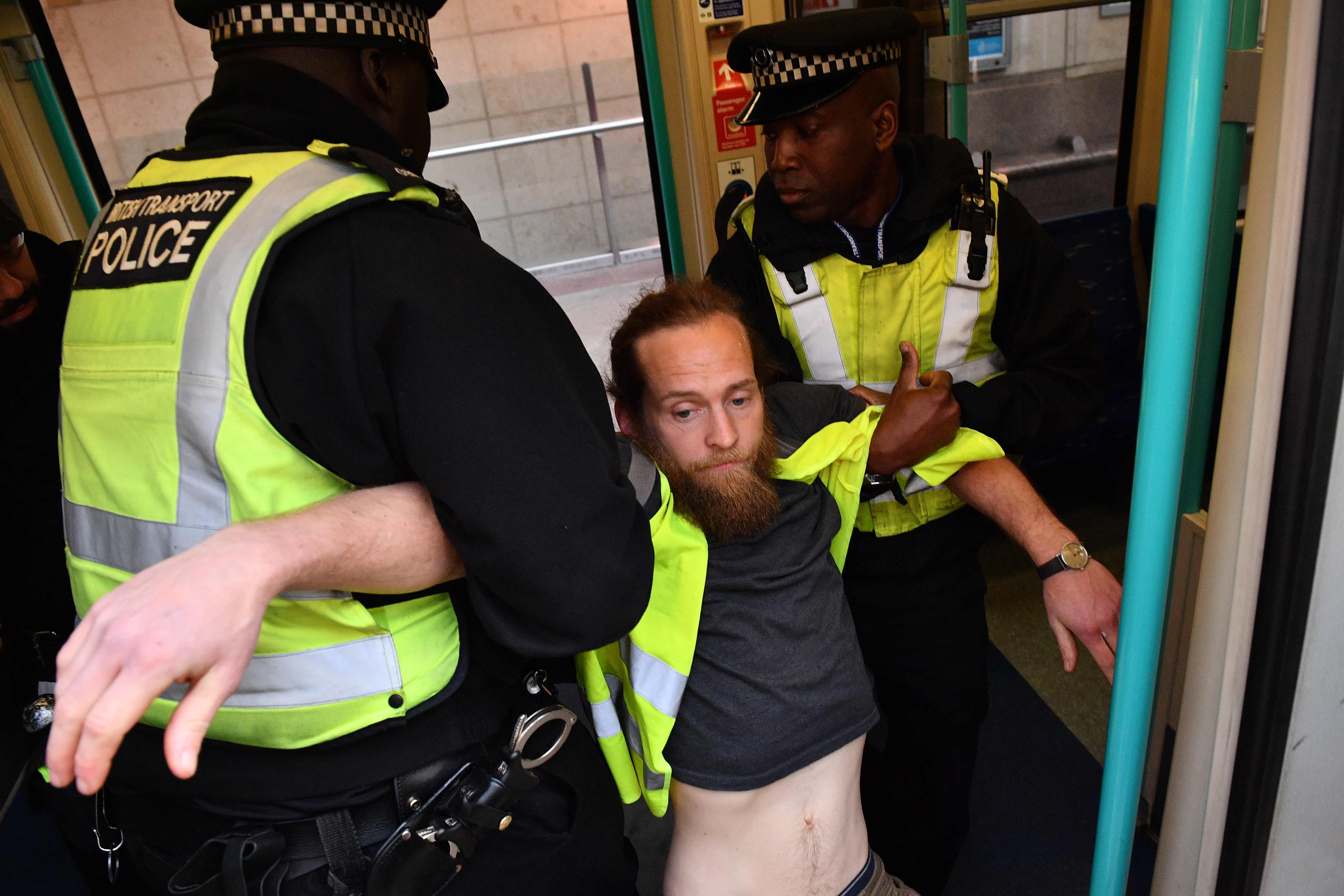 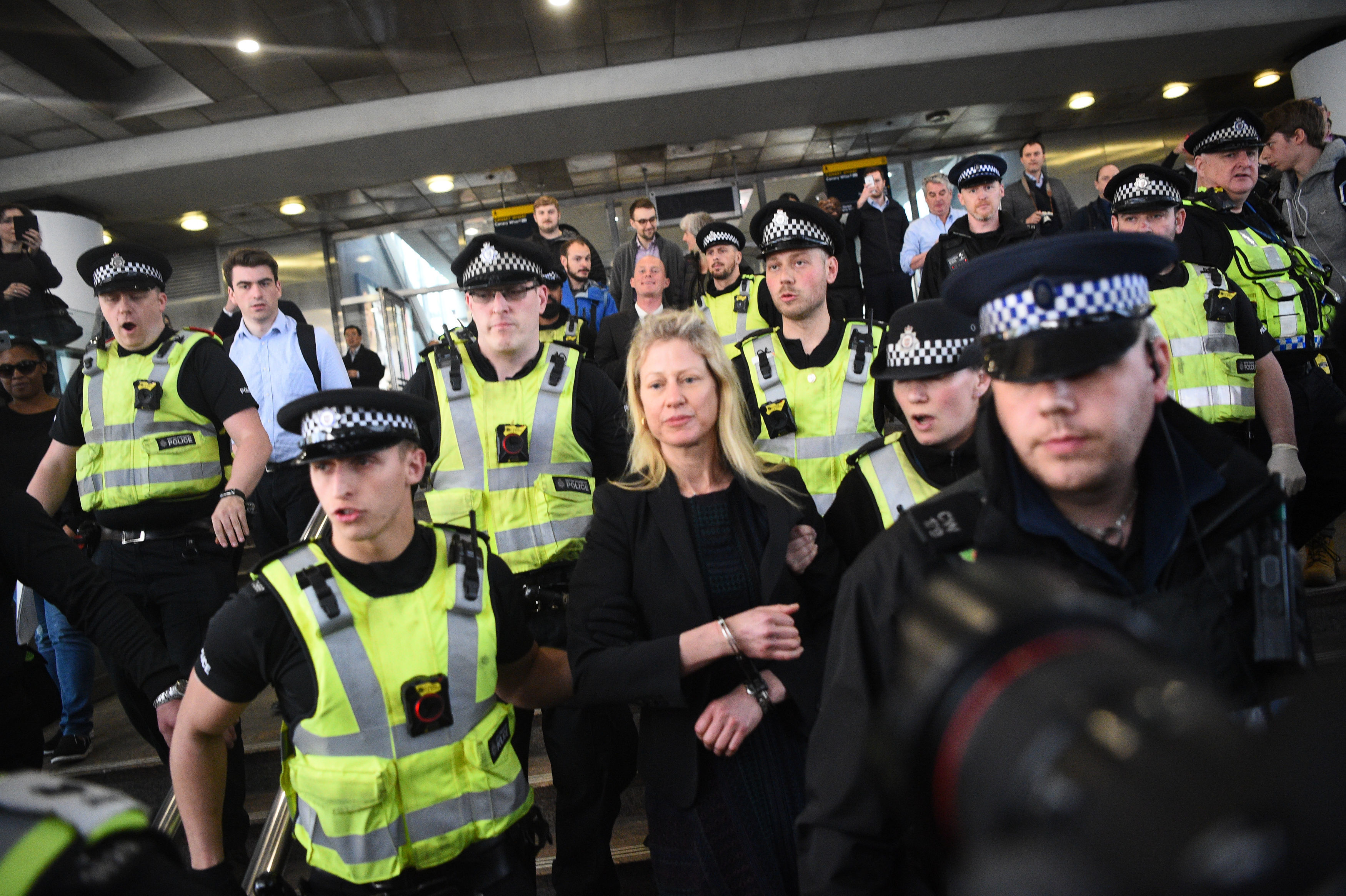 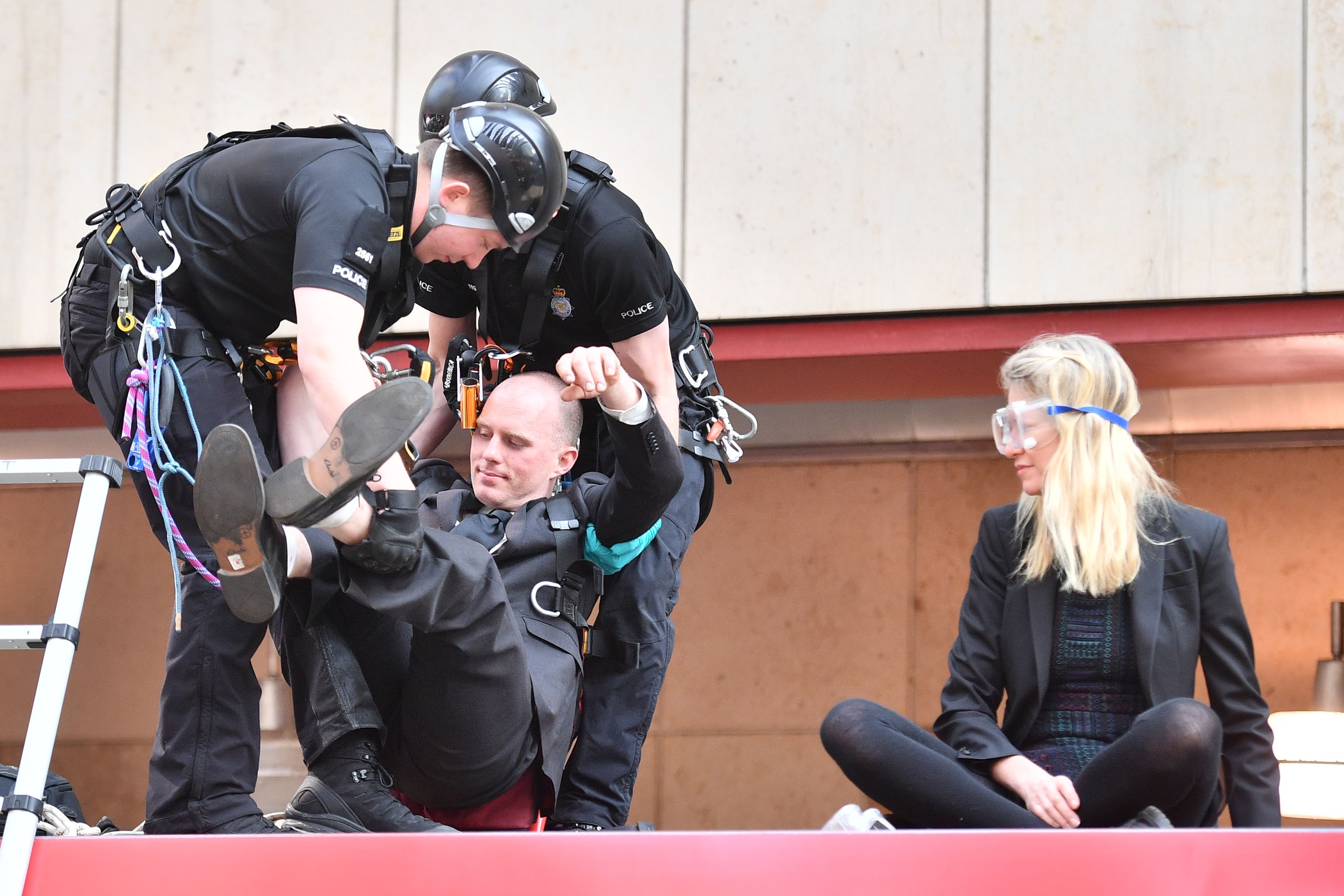 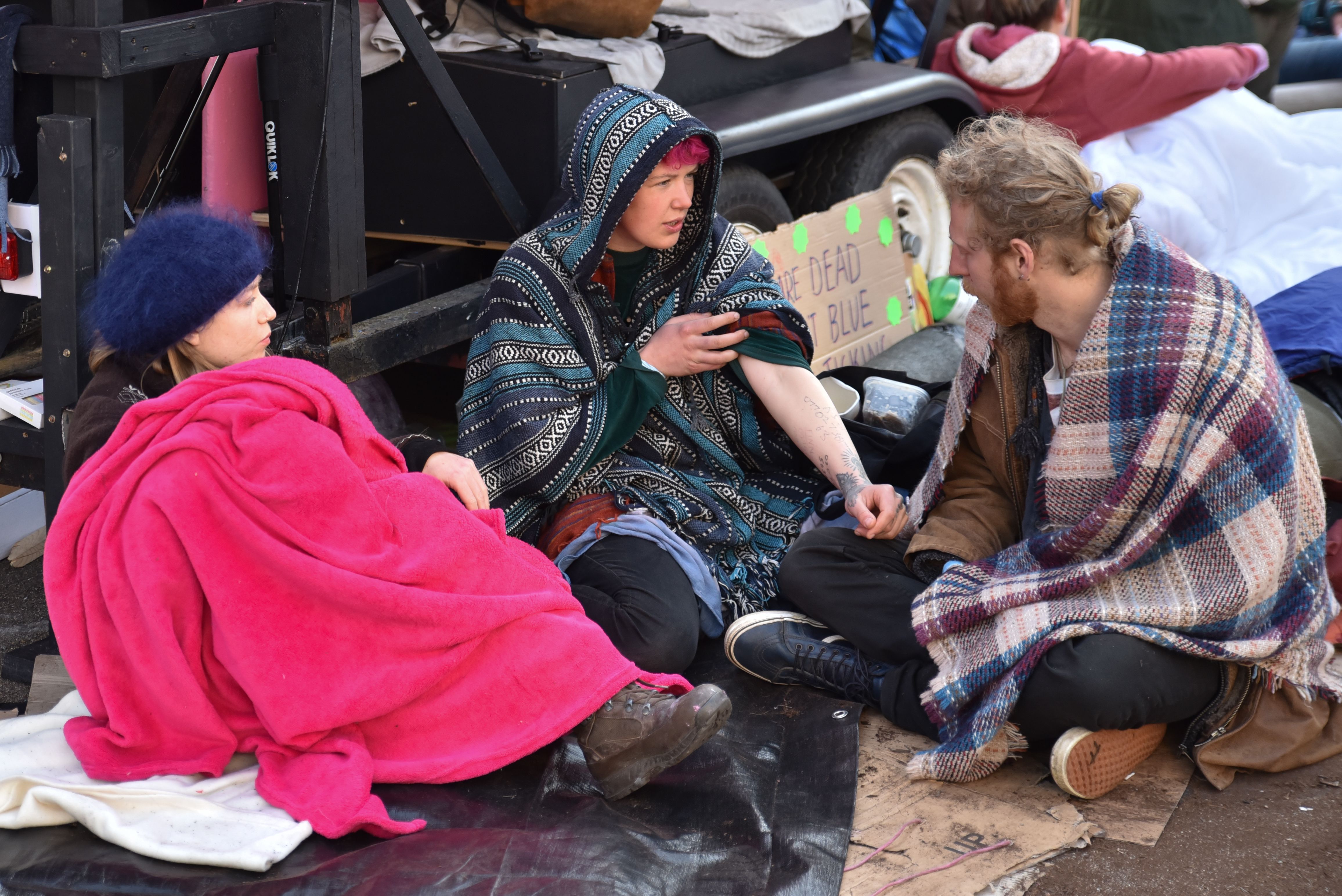 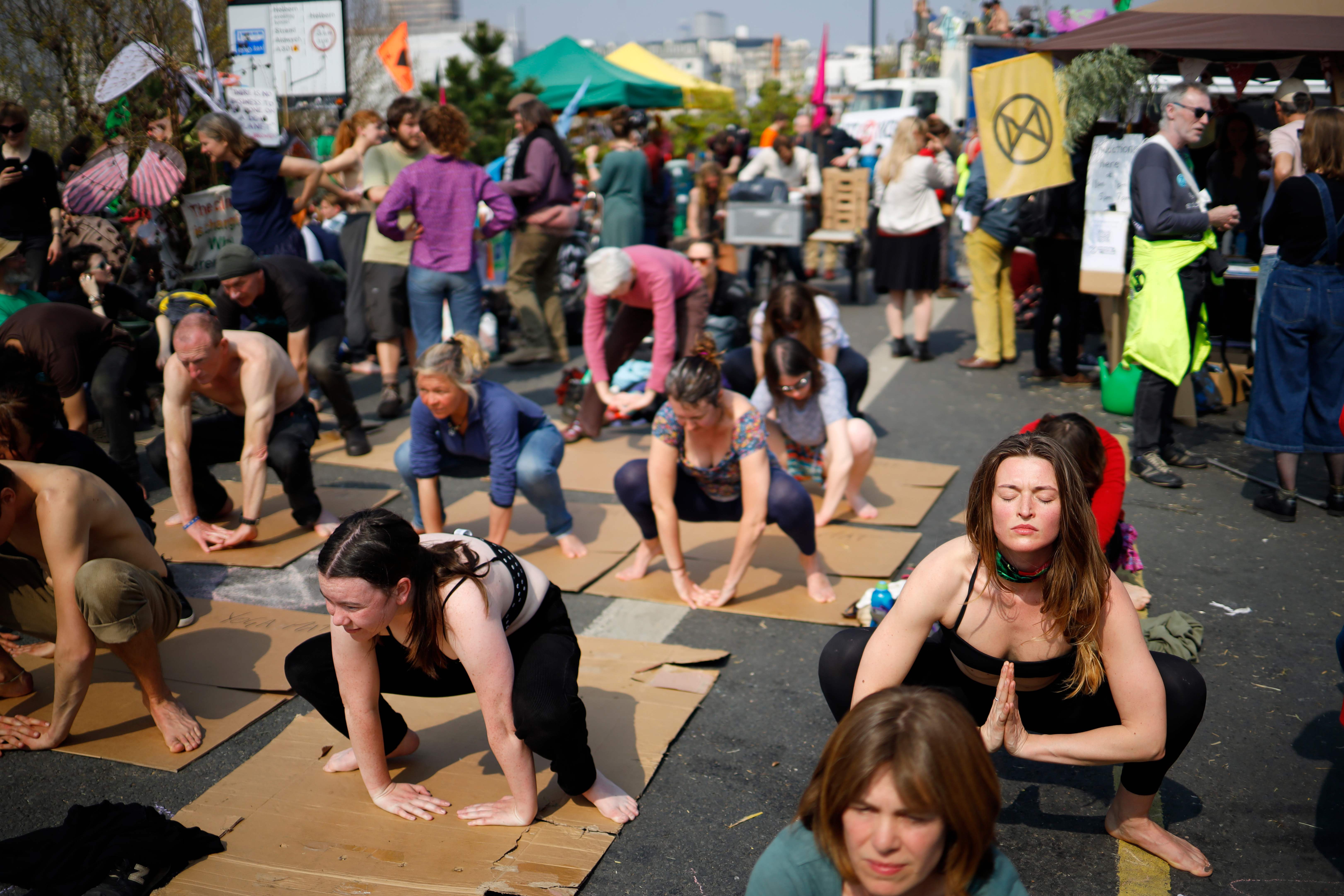 The demonstrations by Extinction Rebellion across Parliament Square, Marble Arch, Waterloo Bridge and Oxford Circus have already disrupted life for more than half a million people since they started on Monday.

The landmarks are still blocked – with protesters even conducting a yoga class using cardboard boxes on Waterloo Bridge as they refuse to move.

And despite more than 300 people arrested over the three days of protests, the activists have vowed only to increase their efforts.

Campaigners said in a statement: "Participants will peacefully break the law in order to stop the Tube and then will wait to be arrested.

"We sincerely apologise to all those who may suffer as a consequence of this disruption. In any other circumstances we would never dream of disrupting the Tube but this is an emergency.

"We request that workers do not intervene in the protests to ensure that they go as smoothly and safely as possible for all involved."

A police officer told the Sun cops will struggle to arrest any more protesters – as they have run out of cells to lock them up in.

Extinction Rebellion has claimed police cells in the capital are full and "operating on a one-in, one-out capacity".

But the Metropolitan Police has said it has "contingency plans in place" should they run out of space. 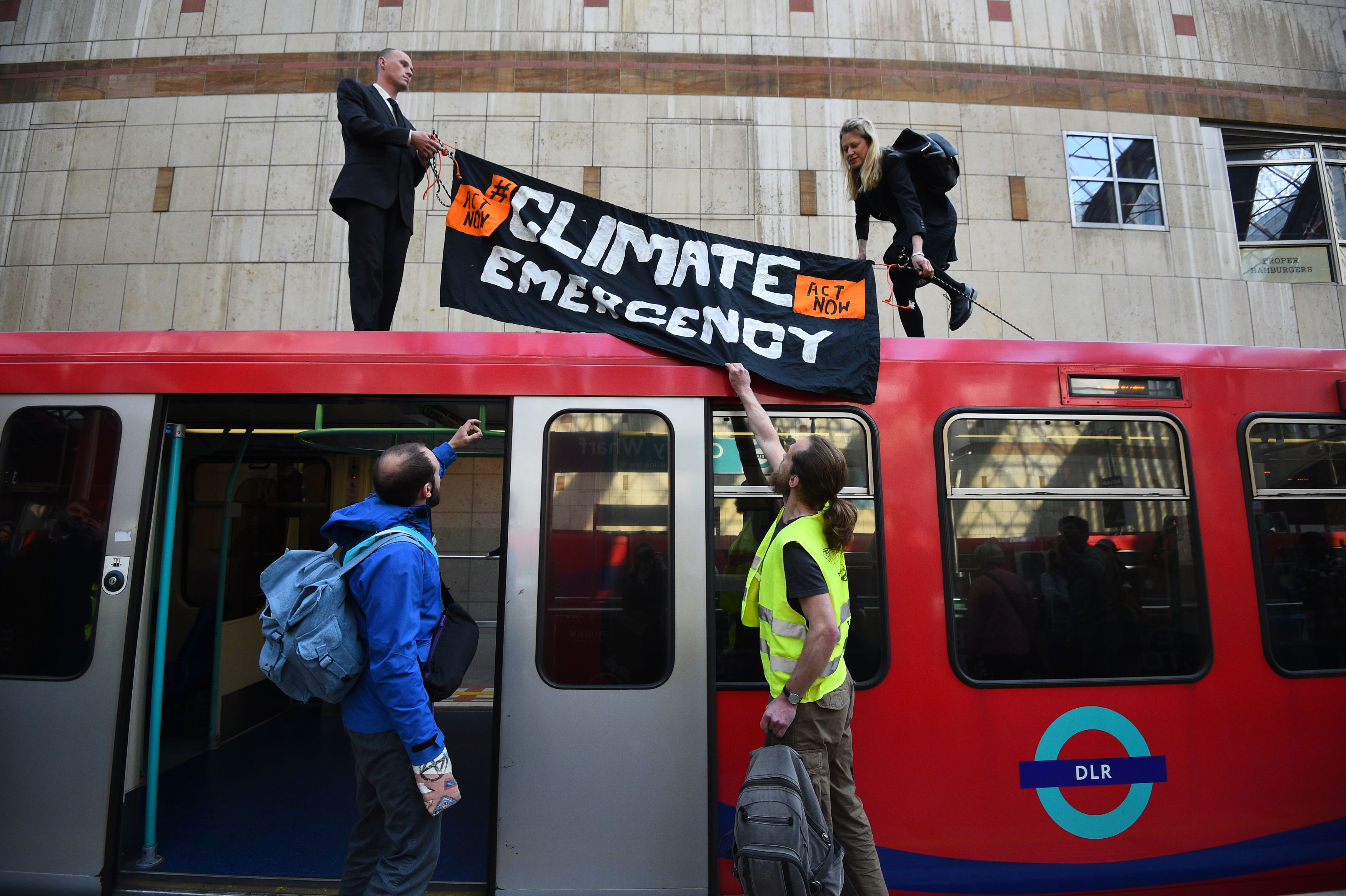 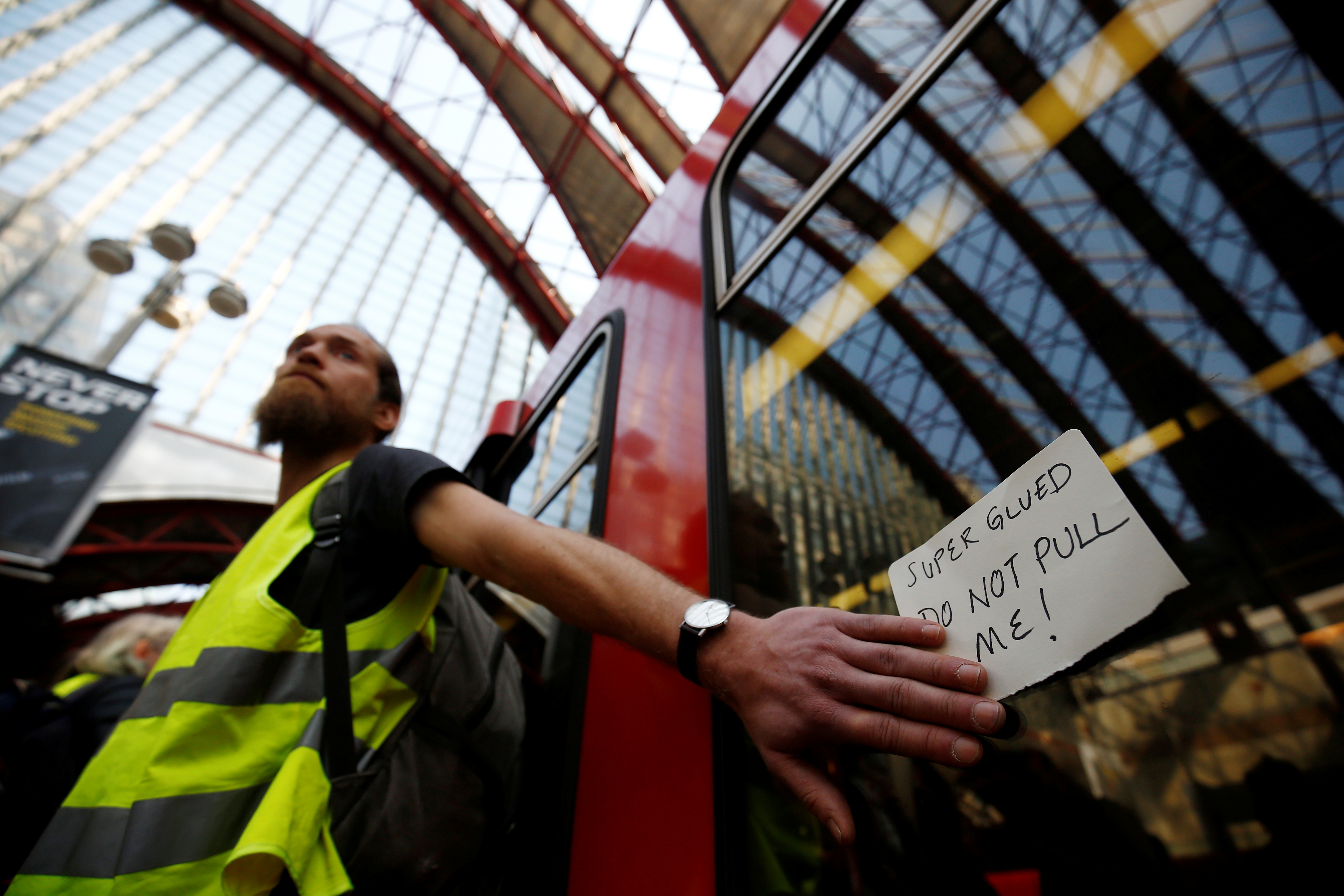 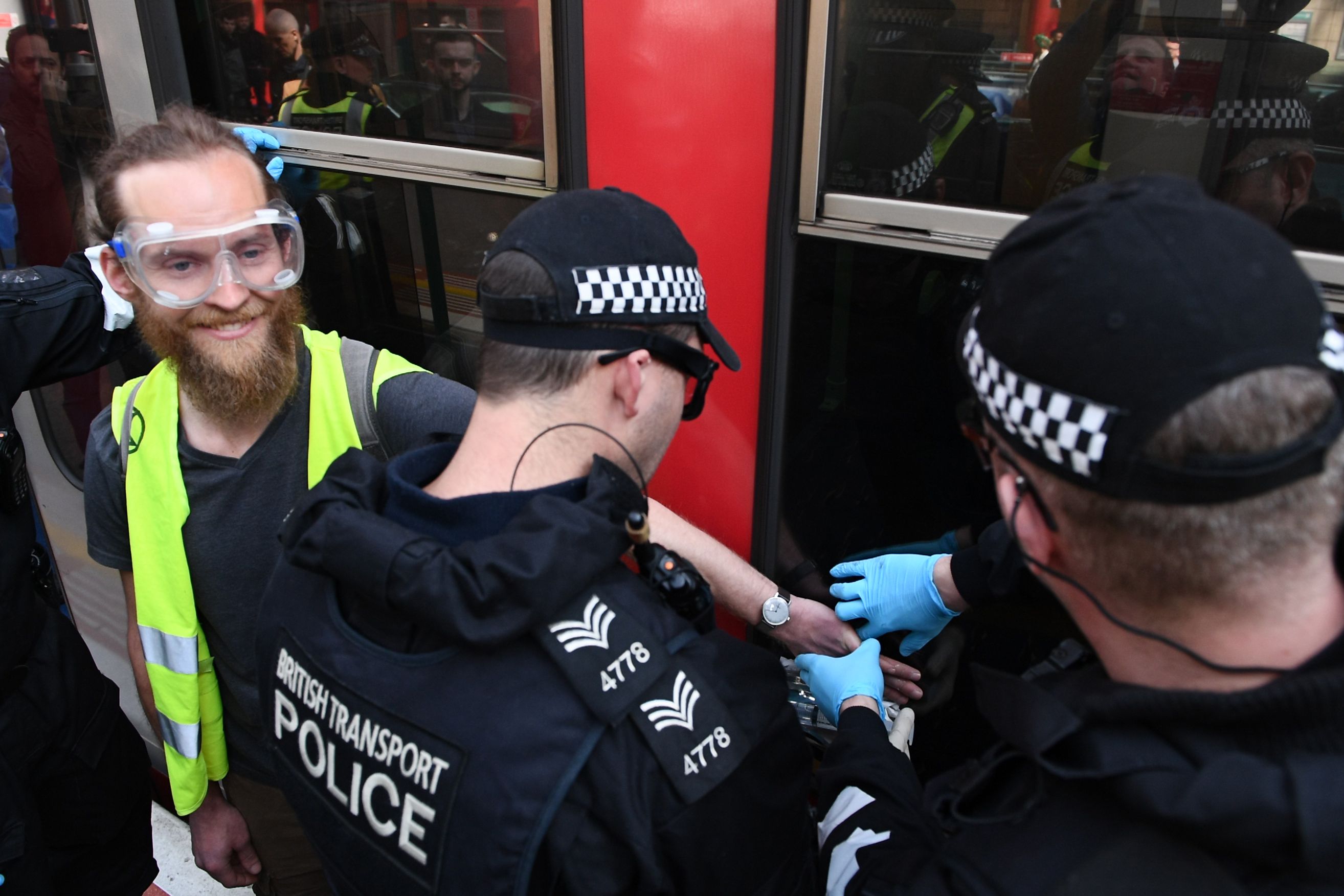 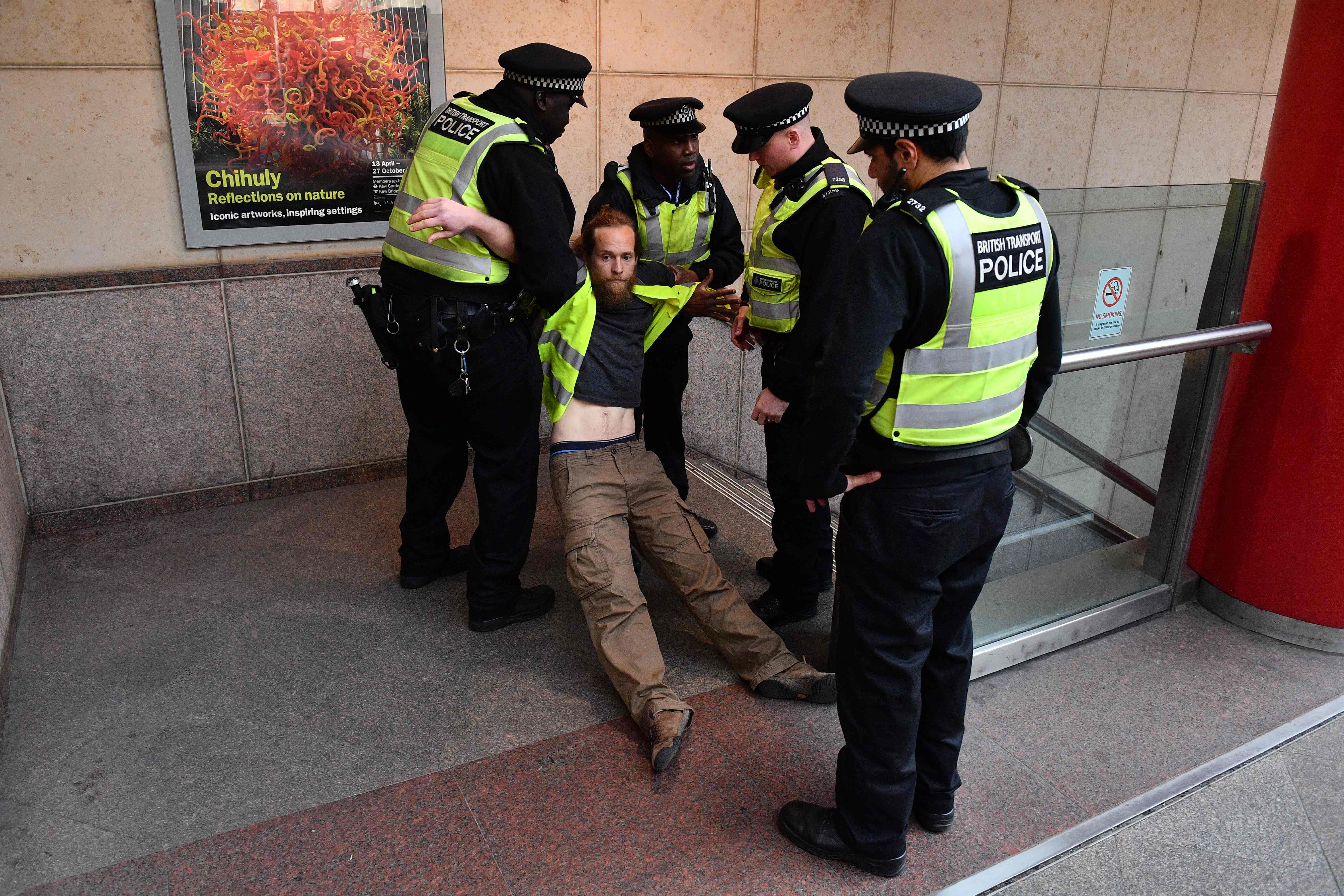 "But at the same time we need to take actions that are disruptive so everyone understands the dangers we're facing right now.

"I'm not someone who goes out on to the streets and disrupts and gets arrested for no reason at all – but I feel people should understand that we are at a critical moment in our humanity's history."

Met Police yesterday confirmed the order for protesters only to demonstrate at Marble Arch would continue for another three days.

They said: "In order to impose this condition, the Met required evidence that serious disruption was being caused to communities in London.

"Based on the information and intelligence available at the time, we are satisfied that this threshold has been met and this course of action is necessary in order to prevent ongoing serious disruption to communities."

London businesses and commuters have spoken of their frustration at the protests.

New West End Company, which represents retailers in London’s West End, estimates it has lost £12m in sales over the last two days when demonstrations.

Jace Tyrell, chief executive of the New West End Company, told Sky News the protest had brought a feeling of "intimidation" to the West End shopping district and, on average, caused a 25 per cent drop in spending in the area, with £12 million less spent on Tuesday.

He warned the cost could rise to the hundreds of millions if Oxford Circus and Marble Arch stations are not opened "pretty quickly".

He added: "What we would like to see is the mayor and the Met to find a more appropriate location in central London for the protesters to continue their peaceful protest but not hold the West End to ransom.

"West End businesses fully support the right to protest but actually this is causing significant damage to our area."

Jay Patel, 26, a local business manager, said: "It's completely ridiculous, we are losing so much money. There's no one here. The police need to do something soon as it's crippling our business."

Another, Joao Verga, who works at a printing company near Oxford Circus, said: "We're trying to make a living and we can't. Why do they pick this time?

"We move very quick in this country, this is only going to slow down everything."

Transport for London warned passengers to check their route before travelling.

A TfL spokesperson said: "We are aware that there are demonstrations taking place across London which may cause disruption to travel.

"The safety of our customers and staff is our number one priority and we’re working closely with the police to manage the impact on London’s transport network."

"This follows intelligence that Extinction Rebellion protesters intend to cause disruption to Tube services during Wednesday 17 April.

"We apologise for any inconvenience this may cause and we would like to assure passengers that this decision is not taken lightly and will be reviewed throughout the day.

"The Force continues to work closely with Transport for London and the Metropolitan Police Service in keeping disruption to a minimum."

London Mayor Sadiq Khan said that while he shared the passion of the protesters about the urgent need to tackle climate change he was "extremely concerned" about plans to disrupt the London Underground.

In a statement posted on Twitter he said: "It is absolutely crucial to get more people using public transport, as well as walking and cycling, if we are to tackle this climate emergency – and millions of Londoners depend on the Underground network to get about their daily lives in our city.

"Targeting public transport in this way would only damage the cause of all of us who want to tackle climate change, as well as risking Londoners' safety and I'd implore anyone considering doing so to think again." 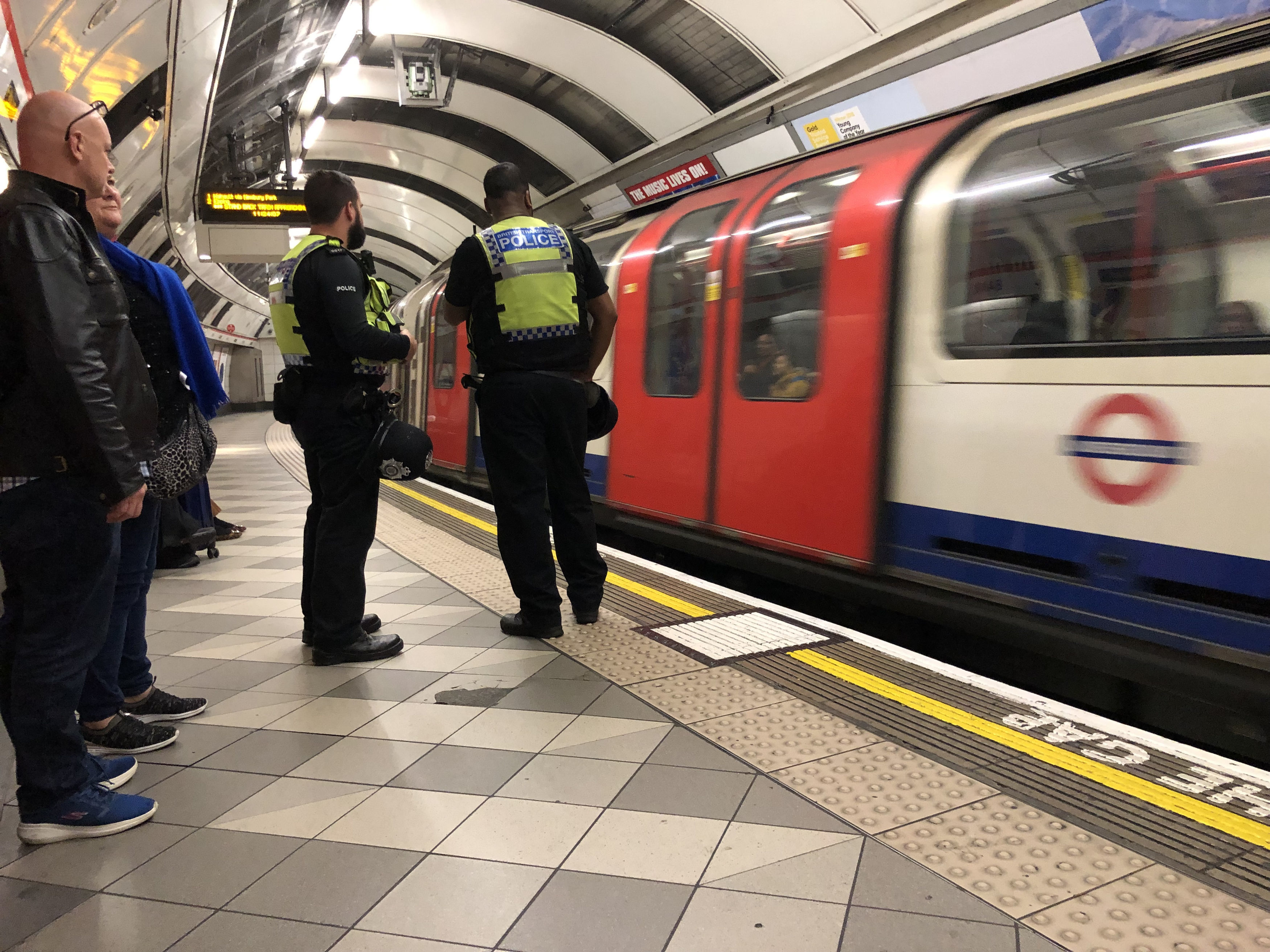 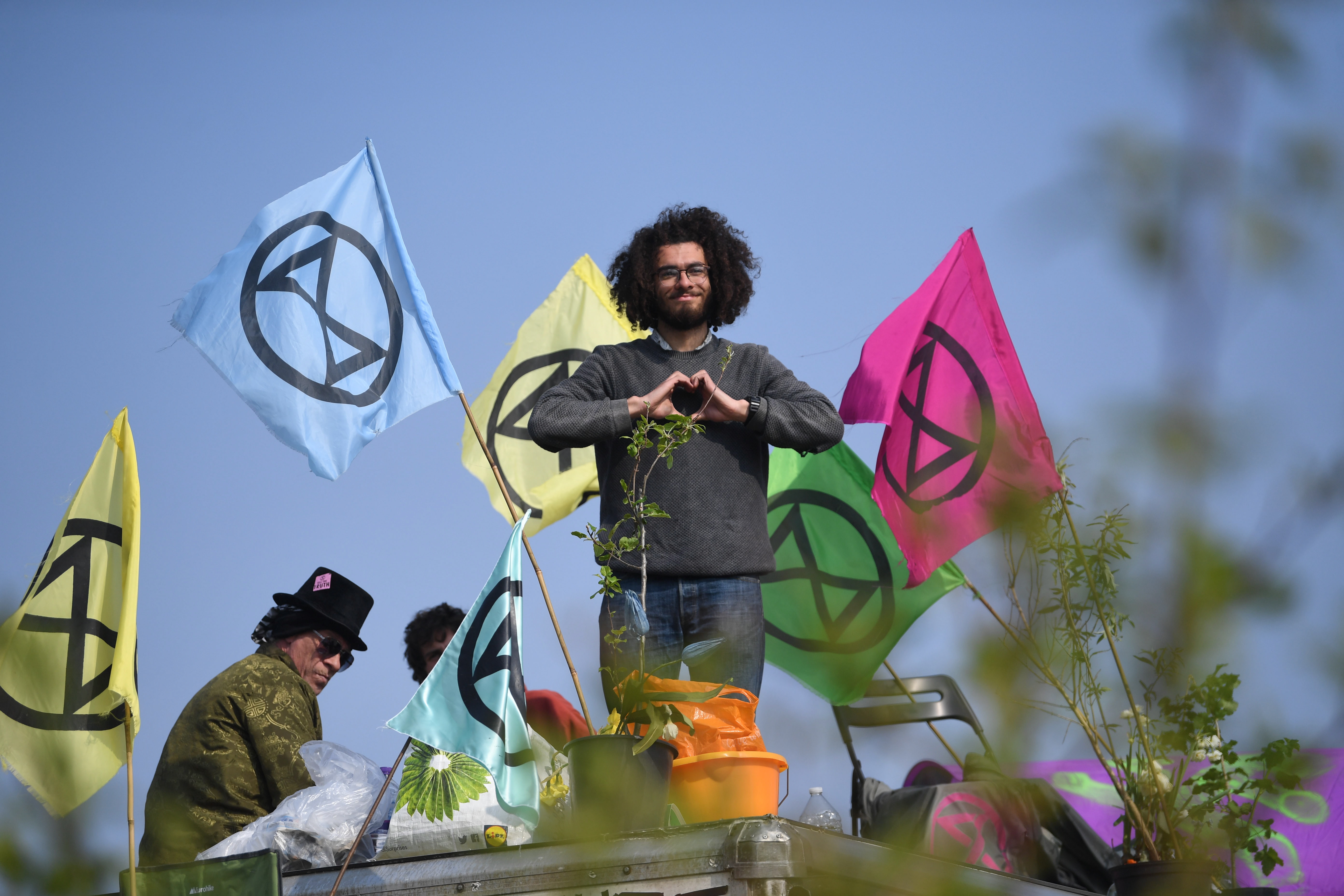 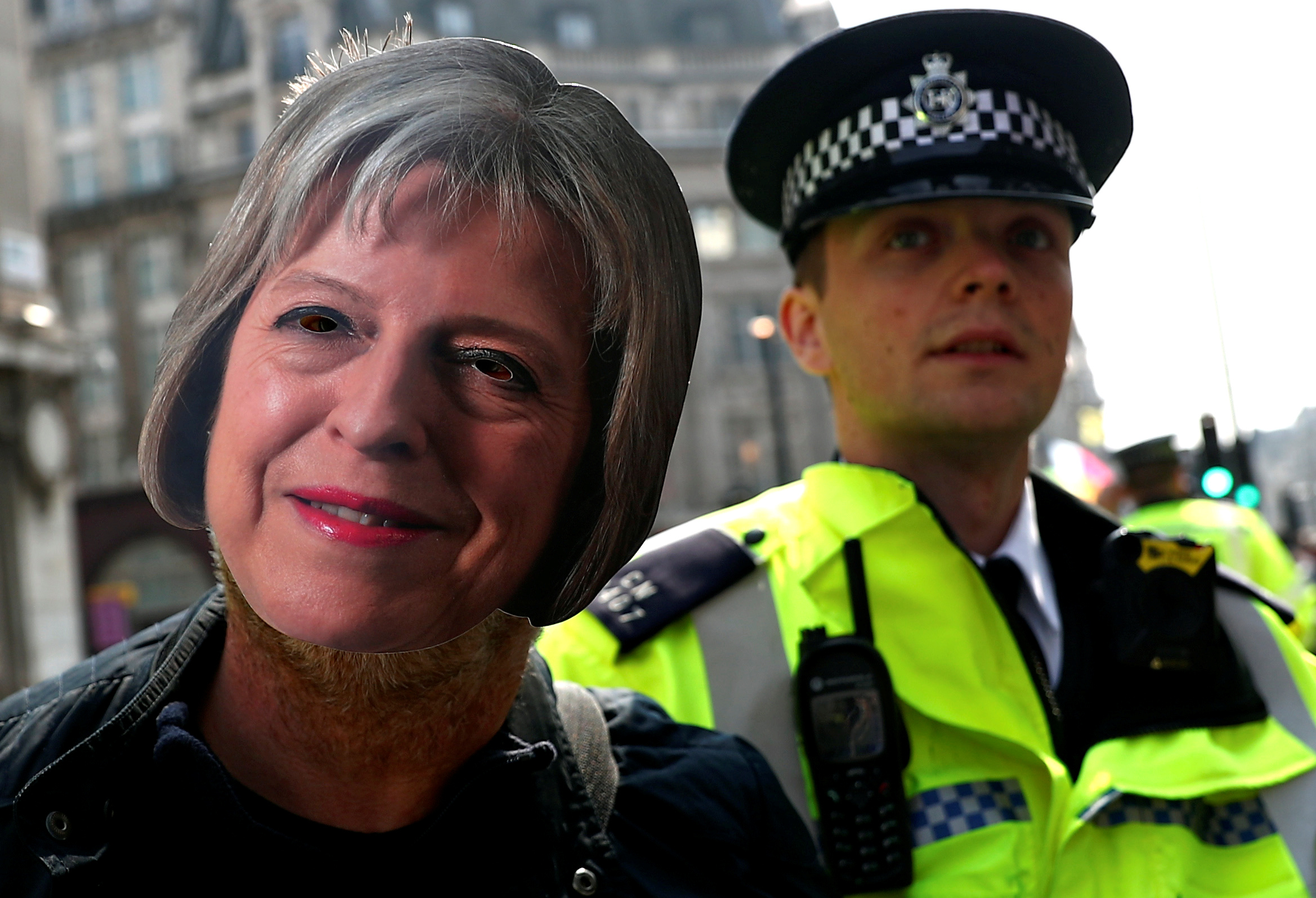 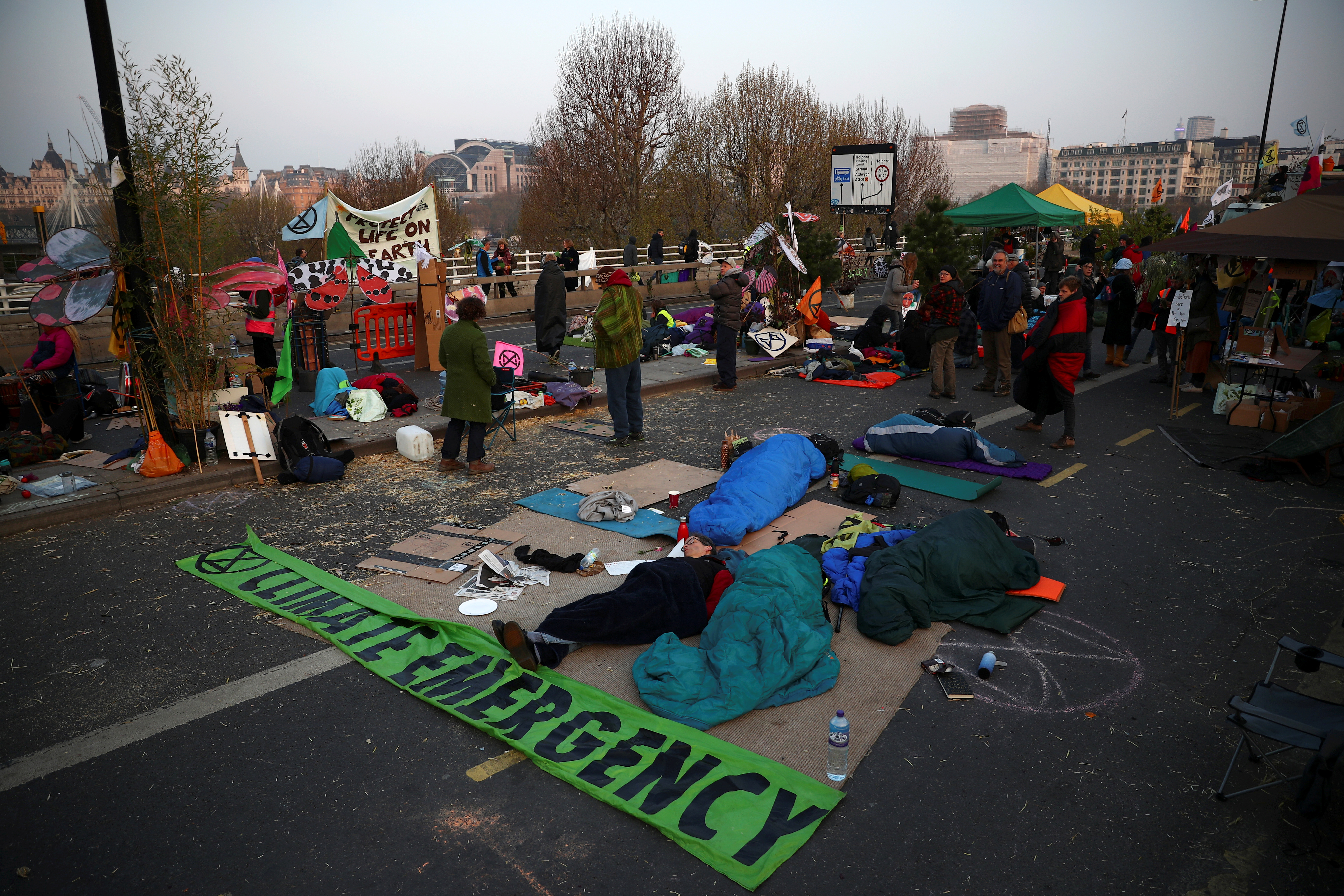 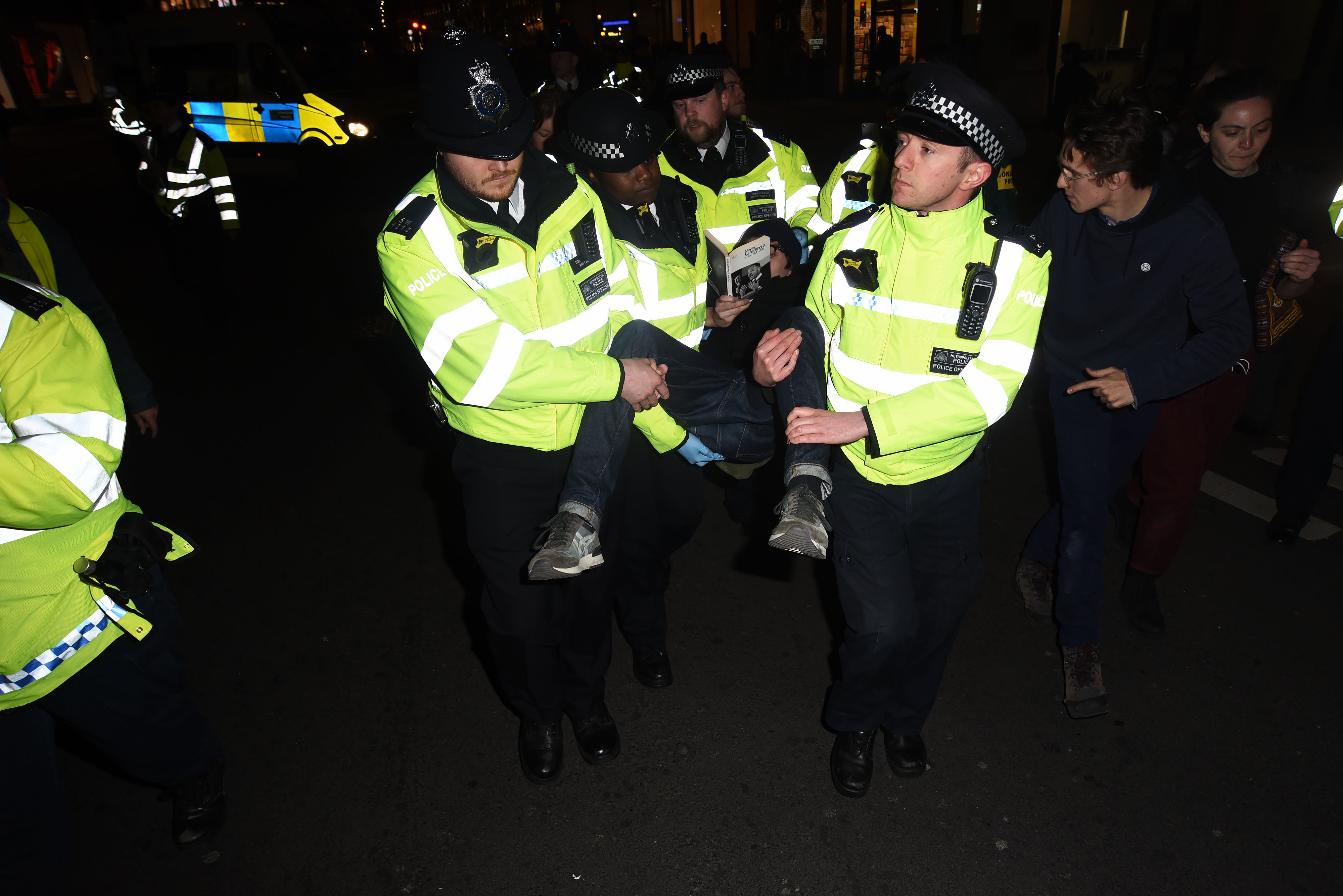 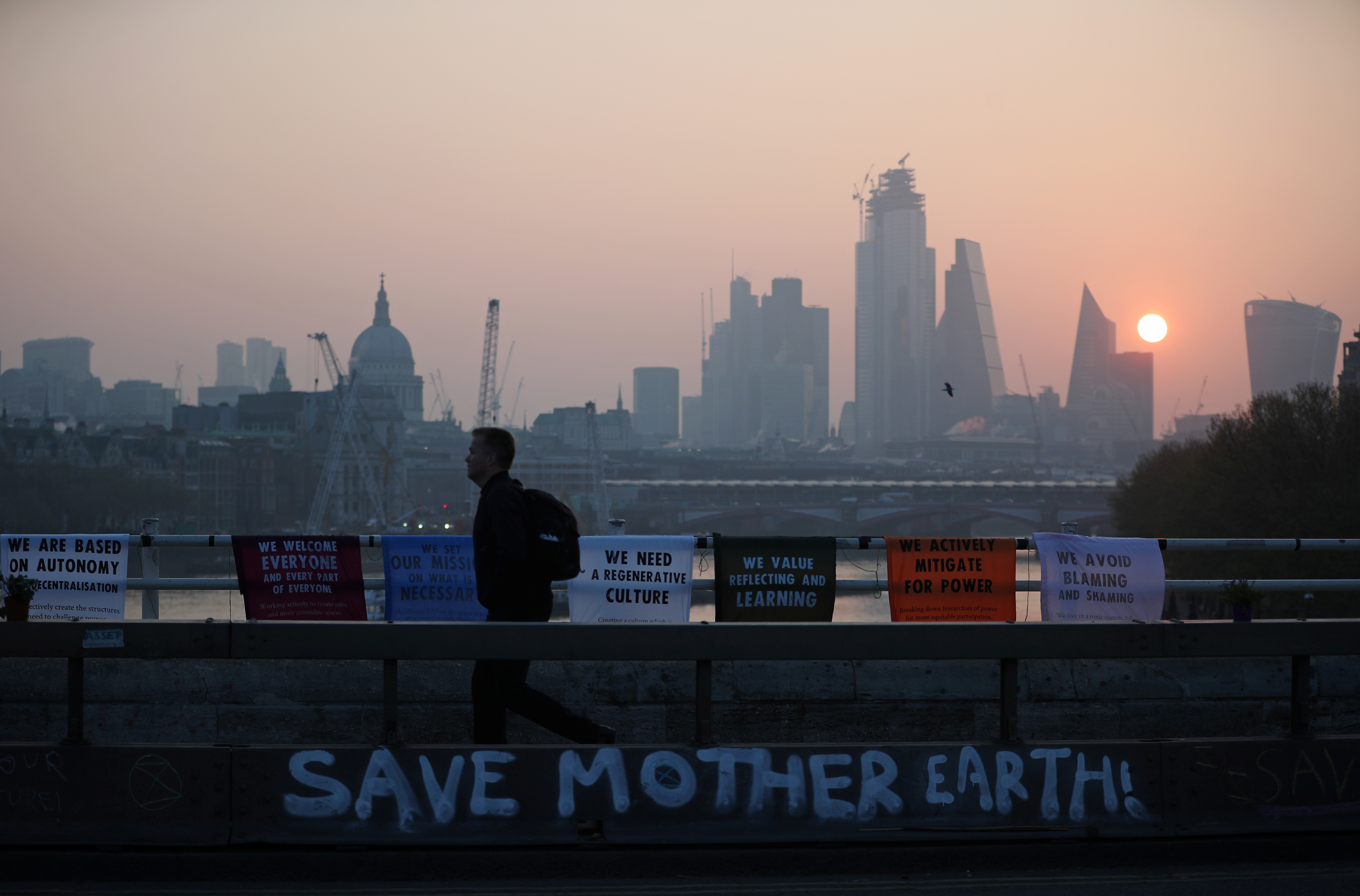 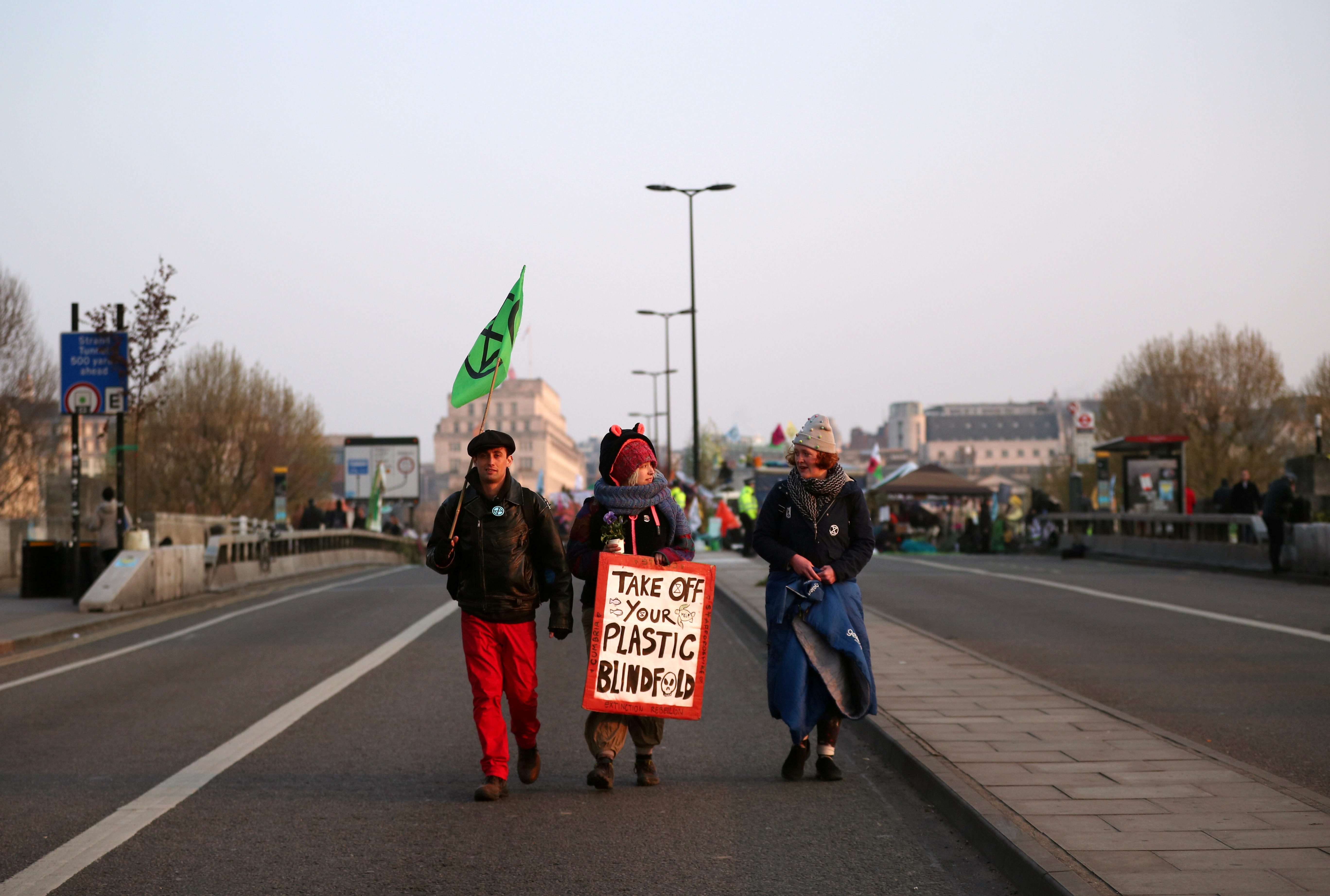 And, cops, dance, skateboard, With
You may also like: