New York: In its inexorable spread across New York City, the coronavirus is exacting a greater toll on men than women. Not only are men infected in greater numbers, new data show, but they are also dying at nearly twice the rate of women.

The data, while disturbing, do not come entirely as a surprise. Similar trends have been observed in China and Italy, where men were both infected with COVID-19 and succumbed to it at higher rates than women. 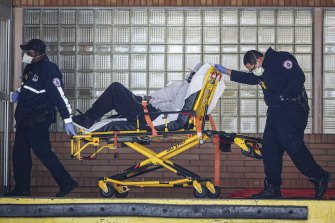 Paramedics wheel a patient wearing a breathing apparatus into the emergency room at Wyckoff Heights Medical Centre in New York on Monday. Credit:AP

Possible explanations for the disparity have ranged from differences in behaviour — smoking rates among men exceed those among women in much of the world, for example — to biological differences.

Women have more robust immune systems, some scientists have noted, that provide an edge in fighting off infections — although it also makes them more susceptible to autoimmune disorders.

Physicians working at hospitals throughout the city say the gender disparity is stark and impossible to miss. 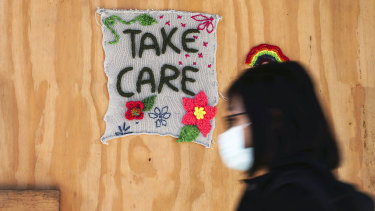 A pedestrian walks past a “yarnbomb” made by artist Ellie d’Eustachio during the coronavirus pandemic, in Brooklyn, New York.Credit:AP

"I'm in the emergency room, and it's remarkable — I'd estimate that 80 per cent of the patients being brought in are men," said Dr Hani Sbitany, a reconstructive surgeon at Mount Sinai Health Systems who has been treating COVID-19 patients in Brooklyn. "It's four out of five patients."

Most of the patients who are brought in with severe respiratory distress are middle-aged, or in their 60s and older, Sbitany said. Male patients dominate both groups.

A spokesman for New York City's health department, Michael Lanza, confirmed that the city was seeing a higher rate of COVID-19 cases, hospitalisations and deaths among men, but said the department could not comment on the reasons at this point.

The health department, which updates its website daily, had recorded 68,776 COVID-19 cases in the city as of Monday, including 15,333 patients who had been hospitalised and 2738 deaths. Both death and hospitalisation rates increased with age, rising drastically at age 65 and again at age 75.

New York state recorded 731 new coronavirus deaths on Tuesday, marking the biggest one-day jump, according to Governor Andrew Cuomo. The state's death toll since the beginning of the outbreak is now 5489 deaths.

"More than two-thirds of the intubated patients are men," said Dr Joseph Lowy, a palliative care and hospice doctor at NYU Langone Health, referring to patients on ventilators.

"I know of no other disease that has that type of predilection for one gender over another," excluding diseases of the reproductive system, he added.

Dr Jennifer Lighter, an infectious disease specialist at NYU Langone, said that a statistical analysis of COVID-19 patients in the hospital system did not find a higher death rate among male patients.

But when death rates were adjusted for age and obesity, both of which are higher overall in female patients, the case fatality rate among infected men was higher.

A disproportionate effect on men has also been seen in California, which has reported 7296 COVID-19 cases among infected men and 6740 among women. In Italy, the case fatality rate was 8 per cent for infected men compared with 5 per cent for women, according to one analysis of 25,058 COVID-19 cases. (Men represented 70 per cent of 1697 deaths tallied by that study.)

In China, one of the largest analyses of COVID-19 cases reported a 2.8 per cent case fatality rate among infected men, compared with a 1.7 per cent rate among women.

Kathryn Sandberg, who directs the Centre for the Study of Sex Differences in Health, Ageing and Disease at Georgetown University, said she was not surprised by the disparity in death rates, though it appears to be more extreme in COVID-19 than in some other infectious diseases.

"It may be something about the way this virus works," said Sandberg, who studies sex differences in hypertension.

"But generally, in humans, it doesn't matter what the infectious agent is," she added. "Women tend to be better at knocking it down, because they have a more robust immune system."

Women live longer than men, and they tend to develop hypertension and heart disease — both of which increase the risk of severe disease with COVID-19 — at later ages than men. The X chromosome — women have two, of course, and men only one — and the female hormone estrogen are believed to play a role in immunity.

One possible explanation for the disparity in COVID-19 may have to do with angiotensin-converting enzyme 2, or ACE2, a protein on the surfaces of cells the lungs and other organs that is a key component of the system that regulates blood pressure, Sandberg said.

ACE2 is regulated differently in men and in women, Sandberg said, and the coronavirus binds to ACE2.

Dr Mangala Narasimhan, a critical care doctor at Northwell Health, said hospitals throughout that system, including those in Queens and on Long Island, also are seeing a gender disparity.

Though she did not have precise numbers, Narasimhan estimated that men represent 65 per cent of Northwell's COVID-19 patients.

"More of them go on ventilators, and because they have more severe disease, more of them are dying," she said. "We don't know why — I don't think anyone does right now."

a, Coronavirus, is, killing, TWICE
You may also like: