The chief of Australia's national anti-corruption commission rejected advice from external barristers that her agency should hold private coercive hearings as part of its investigation into suspected corruption in the Australian Border Force.

Instead, Jaala Hinchcliffe, head of the Australian Commission for Law Enforcement Integrity (ACLEI), sacked the barrister who made the recommendation and ignored his memo laying out a plan to interrogate officials suspected of making tens of millions of dollars in corrupt payments. 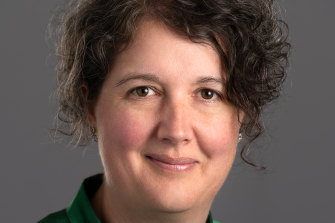 The Age and The Sydney Morning Herald reported on Thursday that the commission was investigating $39 million in payments made by Border Force, against internal advice, to listed boat builder Austal in connection with the $573 million Cape Class patrol boat contract.

Austal released a statement to the ASX on Thursday morning, approved and authorised by chief executive David Singleton, wrongly claiming the corruption probe “has been discontinued”. More than two hours later the company released a clarification claiming it was in the dark about the status of the ongoing investigation.

“Austal has had no contact with [the anti-corruption commission], so has no first-hand knowledge of any investigation, its status, or the substance or detail of any allegations that have been made.”

Austal is also being probed by the Australian Securities and Investment Commission for a series of misleading market announcements between 2015 and 2016, an allegation Austal denies. 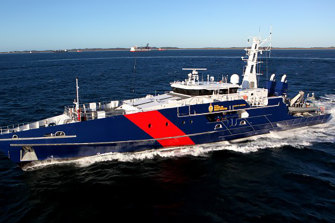 Three official sources have confirmed that in April, barrister and counsel assisting ACLEI’s Austal probe Jonathan Hyde sent a memo to Ms Hinchcliffe setting out the alleged corruption in Border Force. Mr Hyde had been leading the inquiry into the Austal claims and argued for the ongoing use of coercive questioning hearings to investigate the allegations.

Ms Hinchcliffe disagreed with the advice and removed Mr Hyde, a barrister who specialises in corruption hearings and commissions of inquiry and who also serves as a defence force judge. She also removed a second counsel assisting, Dianna Tang.

In a short statement, Mr Hyde said that “I was retained by the former commissioner Michael Griffin, AM, and terminated by the incoming commissioner, following a significant difference of opinion”.

“While I wish I could comment” further, he said he was “unfortunately constrained in what I can say.” Ms Tang, a former NSW barrister of the year, declined to respond to questions.

As counsel assisting the commission, Mr Hyde had wanted to interrogate senior Border Force and Austal figures about why $39 million in “milestone” fees were paid to Austal even though the patrol boat project did not meet its milestones.

The suspect payments were discovered in 2018 by the Auditor-General, who also uncovered explicit internal Border Force advice stating the payments should not be made.

The ACLEI is a small, secretive agency with extensive powers which oversees law enforcement agencies and is a key pillar of the Coalition’s planned Commonwealth Integrity Commission. But Labor, the Greens and multiple legal experts have called it, and the Government’s proposed broader integrity commission, too weak and secretive. 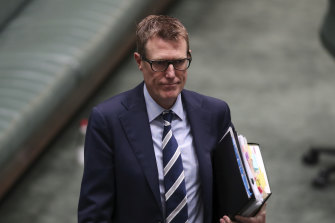 Ms Hinchcliffe defended her leadership on Wednesday, saying she was trying to improve the commission’s prosecution strike rate, which was regarded even by supporters of Mr Griffin as poor during his five-year stint.

Mr Porter insists prosecution success is the key test of any anti-corruption commission, while many legal experts argue corruption is too hard to prosecute via traditional investigative means. They back the use of private and public coercive hearings to expose corruption even if prosecutions do not follow. Answers gathered under coercion cannot be used in as evidence in a court.

As well as removing Mr Hyde and Ms Tang in April, Ms Hinchcliffe also scrapped Mr Griffin’s planned public coercive hearings into corruption allegations surrounding gaming giant Crown Resorts. She removed Sydney barrister David McLure, SC, and his colleague Shipra Chordia as counsel assisting that inquiry, and instead released a limited report. That found Home Affairs gave preferential visa treatment to Crown Resorts’ high-roller gamblers, including people who had initially been refused entry on character grounds, but it made no finding of corruption.

In a statement, Ms Hinchcliffe said she could not comment on the Austal probe because it was ongoing. But she said “decisions about the investigative strategy … are based on the evidence available to ACLEI and the advice of my team”. Coercive hearings led by counsel assisting were not the only means to uncover corruption, she said.

“It is important that these other avenues are exhausted before the more significant step of instigating coercive hearings is taken.”

ASIC is investigating a series of Austal announcements to the sharemarket that coincide with the period in which two of the Australian taxpayer funded milestone payments were made, one of $31 million and one of $8 million.

The second payment was issued on June 29, 2016, the day before the company was placed into a trading halt pending a major announcement with its problematic US combat ships. Construction and design defects forced Austal to report a loss of between $116 million and $121 million.

A Sydney-based fund manager had become a substantial shareholder in January and said he felt hoodwinked by the profit downgrade. “Clearly the market wasn’t informed. As a shareholder, I wouldn’t have been there if I thought there was a major earnings shock to come.”

One market watcher, who declined to be named, said Austal had sacked its audit team in early 2018 and the accounting treatment of the milestone payments would be central to ASIC’s investigation. In 2018, Austal changed its auditor from Ernst and Young to Deloitte. EY was contacted for comment.