The Costa Del Sol has suffered an outbreak of coronavirus as 83 people test positive just four days after the first British holiday makers were allowed to return.

The spike in cases is believed to have stemmed from a staff member in Malaga’s Red Cross centre, who had recently returned from the Canary Islands.

A 79 majority of the 83 positive tests recorded came from young migrants who the centre had rescued from the region’s seas – the remaining four cases were infected staff.

Over 100 people are currently isolating at the red cross centre with all exits and entrances guarded by Policia Nacional in hazmat suits, reports Olive Press. 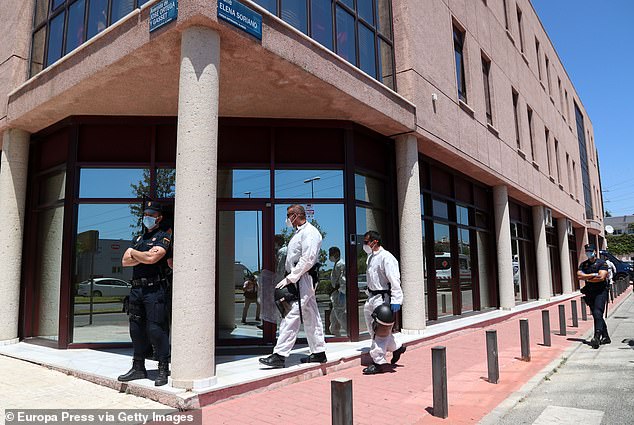 Contact tracing has been conducted to ensure everyone the Red Cross worker came into contact with on the flight and journey from the Canary Islands is also tested.

British tourists were permitted to return to their favourite Spanish holiday resorts on Monday, with some beaches in the Costa Del Sol reaching full capacity only days later.

Earlier this week the road to picturesque Maro Beach near Nerja on the eastern Costa del Sol was shut due to overcrowding.

While some will deem it worth the hassle for a break in the sun, at the moment any traveller arriving in the UK – whether from Britain, returning from a holiday, or a tourist – must quarantine for 14 days and provide their phone number and an address for self-isolation. 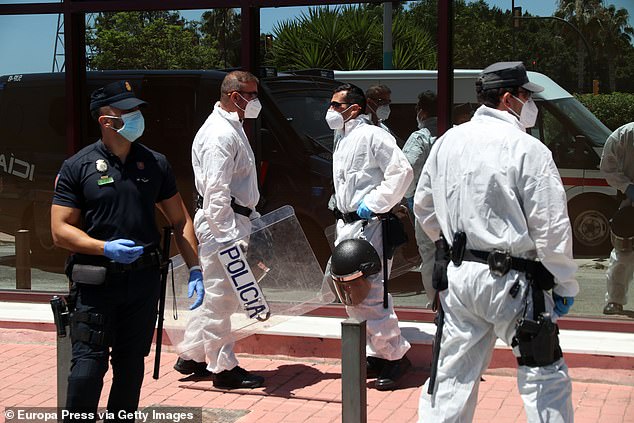 National Police officers equipped with Personal Protective Equipment, guard the 83 people who are infected with COVID-19 at a Red Cross headquarters in Malaga, June 25 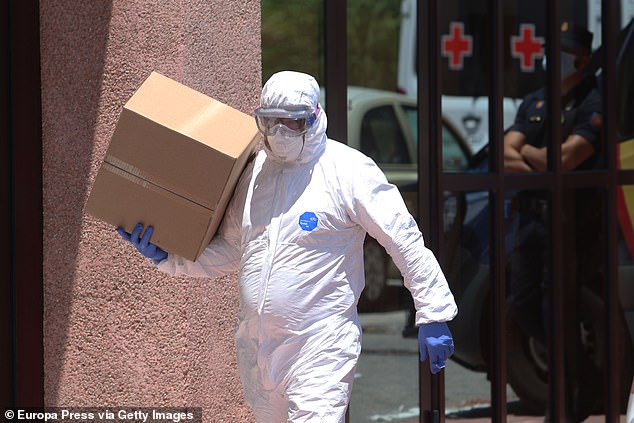 A National Police officer equipped with Personal Protective Equipment (EPI), carries a box at a Red Cross headquarters in Malaga

This is likely to remain the case unless an agreement for an ‘airbridge’ between Spain and the UK is struck to allow quarantine free travel.

A total of 12 countries – including Greece, Spain, Portugal and France – are being considered as potential ‘airbridge’ partners with the UK.

Officials are examining both the risk of travellers bringing Covid-19 back and the popularity of the destination.

The ‘air bridge’ rules would come into play on July 4 and will likely be announced on June 29. 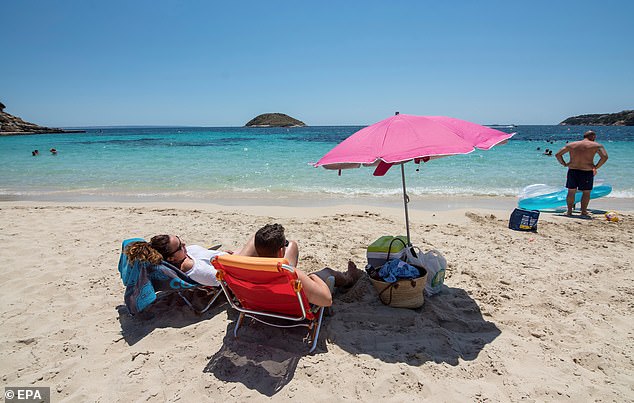 A total of 12 countries – including Greece, Spain, Portugal and France – are being considered as potential ‘airbridge’ partners with the UK. Pictured: A couple sunbathe in Magaluf, June 24 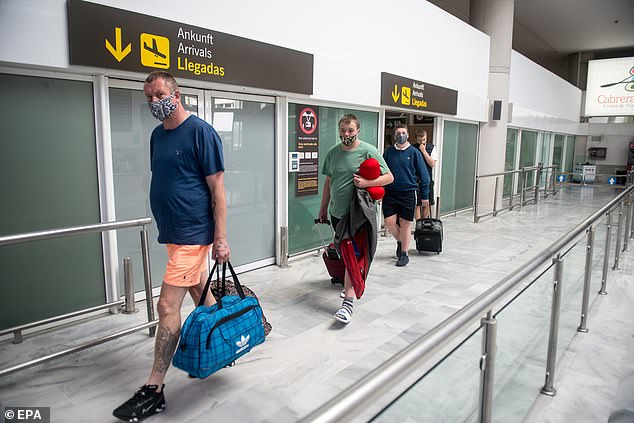 But it will only go ahead if the chief medical officer provides advice on each nation and the Foreign Office lifts its non-essential travel ban to the countries in question.

An aviation source told The Daily Telegraph: ‘It is work in progress – risk first, and how you measure that risk, followed by the popularity of the destination.’

Travel company Tui has told its customers that it will only fly them to countries that have air bridges in place.

The company has pledged to provide ‘quarantine-free holidays’ to all its customers, meaning they don’t have to isolate on landing or upon arriving back home in Britain.

Transport Secretary Grand Shapps suggested that only countries with an effective track and trace system would be allowed to form an air bridge with the UK.

Travel company Tui has told its customers that it will only fly them to countries that have ‘air bridges’ in place.

‘Air bridges’ give tourists the ability to travel between a foreign country and the UK with no mandatory 14-day quarantine upon landing back home – or arriving there.

The company has pledged to provide ‘quarantine-free holidays’ to all its customers, meaning they won’t face any coronavirus measures which could impede their trip.

But this could spell disaster for holidays that are already booked should the ‘air bridges’ not be established in time, The Sun reports.

Tui told its customers in an email: ‘We promise we’ll only take you on quarantine-free holidays.

‘This means we won’t travel to places where we know that you’ll need to self-isolate when you arrive or when you return home.’