Long before the post-mortem brain examinations of football legends Graham "Polly" Farmer and Danny Frawley, or the early retirements of AFL players like Liam Picken and Koby Stevens; before chronic traumatic encephalopathy was ever on the lips of the football world, Martyn Bain, a country footballer of modest ability, already suspected something was breaking in his mind.

He began joining the dots between at least 50 on-field head injuries and his changing personality – easier to anger, defensive, "a bit obsessive compulsive" – as far back as the 1990s, shortly after he retired from a near two-decade career with half a dozen clubs throughout country Victoria. 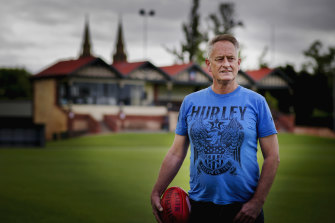 Martyn Bain has pledged his brain to be studied for CTE after he suffered dozens of concussions playing country football.Credit: Ben Searcy

His relationships suffered as he got older and, after two significant concussions while at work in the demolition industry, he fell prone to alcohol and bouts of depressions, the latest of which nearly claimed his life at Christmas.

Now 59 and living in the Barossa Valley, Mr Bain has pledged his brain to the Australian Sports Brain Bank so it can be studied upon his death for CTE, a degenerative brain disease found in people with histories of repetitive concussions or more mild subconcussive impacts.

The discovery of CTE in the brains of Farmer and Frawley this year rocked the AFL. Several modern-day players have already retired or are in career limbo from the effects of head trauma.

But less discussed is what is happening in the suburbs and regions, where Professor Alan Pearce, Victorian Brain Bank research manager, believes the hidden toll of head trauma is even more acute than in the AFL.

"In Australia we still don’t know the rate of CTE at the elite level, but even if we were to assume it was 1 per cent, you look at 1 per cent of the [entire playing] population and that’s a huge number," Professor Pearce said.

"It hasn’t really filtered down so much at the club level, where there's still this old-fashioned thinking of not wanting to let your teammates down and it’s seen as a weakness."

The AFL has distributed concussion guides to amateur leagues and clubs. But safe implementation depends on who is applying the advice. It also relies on the honesty of players who, in the macho culture of local football, can often downplay symptoms, Professor Pearce said.

"That's really tough for someone mainly there to strap ankles or put ice on an injury," he said.

"There's a directive from Concussion in Sport Australia where only a medical doctor can diagnose a concussion. But where in club land do they have the access or money to have a medical doctor on site for every game?"

Professor Pearce said 350 Australians had pledged their brains to the bank, which is based at the RPA Hospital in Sydney, the majority of which are from non-elite past or present athletes.

Mr Bain volunteered as a trainer with various clubs after his playing days. He said it was in this environment he began to recognise the same symptoms and behavioural changes emerging in a handful of other concussion-prone players that his family had recognised in him.

"Country footy is way behind. There's this attitude of you'll be right, get back on the field. And there's a lot of money in country footy now.

AFL Victoria, the governing body for the state's amateur leagues, does not mention concussion in any of the 42 "key priorities" identified in it's five-year strategic plan. The AFL did not respond to requests for comment.

Professor Pearce said while CTE, which can only be diagnosed post-mortem, was generally associated with repetitive head trauma over a long period of time, "we just don't know yet" whether even a handful of concussions increased the risk later in life.

"But if we look at some of the evidence from America we do see young people who have passed away with CTE in post-mortem. That doesn’t mean CTE was a mechanism for their early deaths, it’s just that they found that pathology in the brain." 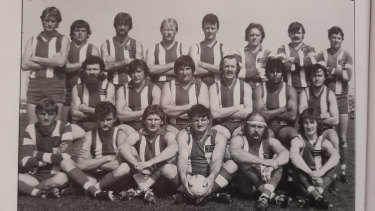 Natalie Foley, a healthcare planner who helps amateur sportspeople find services to treat their head injuries, said she worked with young people unable to work or study for weeks or months as a result of a single concussion.

"There is also no streamlined, gold-standard approach to referrals and pathways for continuum of care," she said.

"It’s very different from someone involved in a car accident or industrial accident. It’s a bit of a no-man’s land. It’s a wild west."

Ms Foley said she had received a surge in referrals for long-retired men since CTE began hitting front pages and talkback radio. Close to half her clients came from amateur footy backgrounds.

Professor Pearce stressed he did not want to deter people from the game. Most people played long careers without serious or repetitive head trauma and benefited greatly from the exercise and camaraderie.

"It’s just something we’re trying to educate people about," he said.

"I think the main thing is [for clubs] to have a clear concussion policy that is communicated to athletes and then make it part of the whole culture," he said. 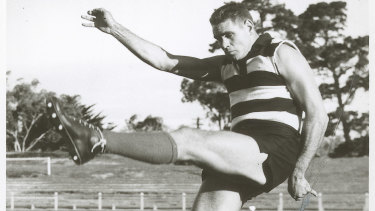 “Polly” Farmer, who was diagnosed with CTE after his death, was an inspiration for generations of Indigenous footballers.

"Rather than simply reading the riot act to them and saying ‘if you’re concussed you must come off’ … actually articulate it as a brain injury.

"Clubs would be really prudent now to start getting coaches on board and support staff on board to drill home this is a very serious injury and more than just a corkie."

Get our Coronavirus Update newsletter for the day’s crucial developments and the numbers you need to know. Sign up to The Sydney Morning Herald’s newsletter here and The Age’s here.