Couple jailed after luring daughter to Bangladesh for forced marriage

A woman who was tricked by her mother and father into travelling to Bangladesh in order to force her to marry her first cousin has branded them ‘monsters’ as they are jailed for a total of eight years.

Leeds Crown Court heard the victim was told the family were going on holiday to celebrate Eid together, but when they arrived in a remote village her parents revealed they had set up the wedding.

During her evidence the victim, from Leeds, said her father threatened to slit her throat and ‘chop her up in 18 seconds’ – one for each year of her life – if she did not agree to the plan. 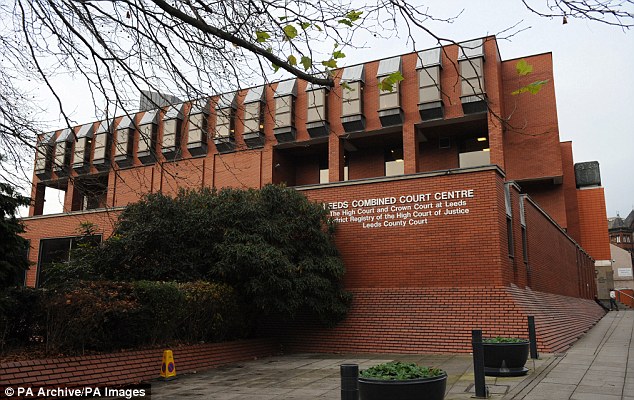 Leeds Crown Court (pictured) heard the victim was taken to the south Asian country on the pretence that she and her family would celebrate Eid together, but was instead told by her parents that they had set up a wedding for her

She also told how he would repeatedly beat her, at her mother’s encouragement, after saying she did not want to marry the relative.

None of those involved can be named for legal reasons.

The teenager, who was 18 at the time of the incident in July 2016, was left ‘almost suicidal’ by the proposition and was told by her mother that she would have to have a child with her would-be husband so that he could attain a visa.

‘I thought, if the worst came to the worst, then I would get married and come back to England, and file a report saying what had happened,’ the victim said.

‘But my mum said there was no way that that would happen, because they were going to leave me there for a year so that I would get pregnant so that he (the first cousin) could get a visa.’

With the help of her sister and boyfriend, she was able to contact the British High Commission who, fearing she may be in danger, performed a rescue operation days before the marriage was due to take place.

The British High Commission in Bangladesh, the Forced Marriage Unit, and Bangladeshi police worked together to rescue the victim and bring her safely back to the UK.

Following a trial at Leeds Crown Court, her parents were convicted of forced marriage and of using threats, violence or coercion to pressure her into going through with the wedding.

In an impact statement read to the court, the woman, who is from Leeds and is now 20, described how she has had to assume a new identity and now lives in fear and hiding from her family and community.

She said: ‘I know I will always have to remain cautious but, knowing those monsters are going to be in prison, I feel the uttermost freedom in my heart.’

She went on: ‘I want other girls to know that forcing someone to marry is wrong.

‘I want to be able to give a message to my siblings and other people who find themselves in this situation that life does go on.

‘I want my elders to know that it is illegal and you can’t treat family like this. I want to be able to hold my head high knowing that I stood up for what is right.

‘I want to be able to live knowing that I will not be a victim for my parents’ honour and reputation. I will not live in shame. I am now free.’

Michael Quinn from the CPS said: ‘This victim was cruelly and deliberately misled by her parents who were determined to take her to Bangladesh for a marriage she did not want. Once she was there, they told her that whether or not she agreed, she would be married, and that wedding arrangements were already in hand.

‘When she refused, she was assaulted and threatened with further violence. She showed courage in contacting the authorities for help, and provided valuable assistance with the investigation and prosecution of these offences.

‘This successful prosecution sends a clear message that forced marriage is a very serious crime and those responsible will be prosecuted.’