A couple have won £1million just 24 hours after the husband was made redundant – following a tragic year that saw him lose both his brother and sister-in-law and his wife suffer a life-changing diagnosis.

David and Shelley Adams, from Chipping Norton, Oxfordshire, hit the jackpot when they won the Lotto prize last weekend, hours after David found out he had lost his job as a wood machinist.

It comes after a tragic 12 months that saw Shelley, 52, lose her job following a diagnosis of MS and the family suffer two tragedies, just weeks apart.

David, 61, explained: ‘Many people would think the redundancy was the worst news but in fact it’s just the final straw in a catalogue of difficulties we have experienced. 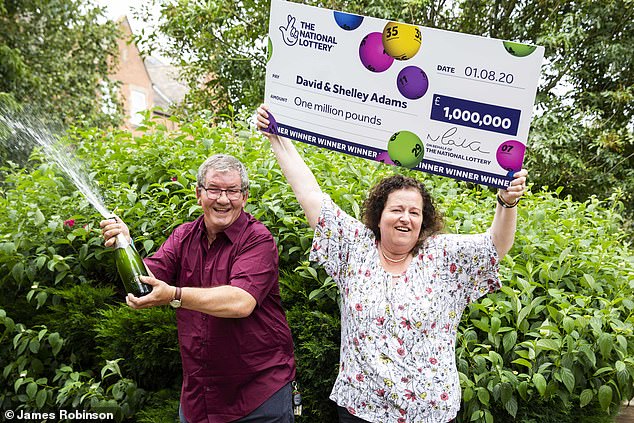 ‘Just last year Shelley was diagnosed with MS and had to give up the job she loved as a community carer, putting a strain on our finances and heightening her clinical anxiety.

‘In April we sadly lost my sister-in-law due to a massive heart attack, then two weeks in early May we received the news that sadly so many families have received this year, her husband, my brother, had passed due to Covid-19.

‘It’s been a really tough time but we stick together and try to keep smiling, whatever life has thrown at us. Never in our wildest dreams did we think the next thing thrown our way would be £1M quid.’ 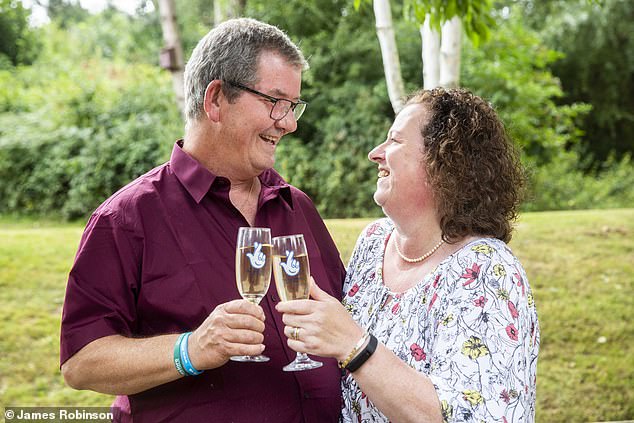 The Chipping Norton couple had endured a ‘catalogue of difficulties,’ during a tragic year that saw them both lose their jobs and two relatives

Their luck had changed in the early hours of Sunday morning, when a shocked David woke his wife up to tell her the news.

She said: ‘On Sunday morning, about 1.30am, David came into our bedroom saying “are you awake”, to which I pretty grumpily replied “well I am now”.

‘But as he switched on the light I could see he was shaking so my grumpiness turned to worry as I asked him what was up, whereupon he told me we’d won the lottery.

‘I was furious, I thought he meant a tenner.’

The couple rushed into their son’s room to check they had won the big prize.

Shelley, a former carer, added: ‘The poor man, he was meant to be up at 6am to get to work and there am I, waving a phone in his face and telling him we’ve won £1M.

‘Needless to say none of us slept well the rest of the night and we were relieved to confirm the win with Camelot in the morning.’

The family are now planning to fly, first class, to Canada, where they can see family and friends.

They have other plans for the money, including buying a new Nissan Qashqai, but David has some other plans too. 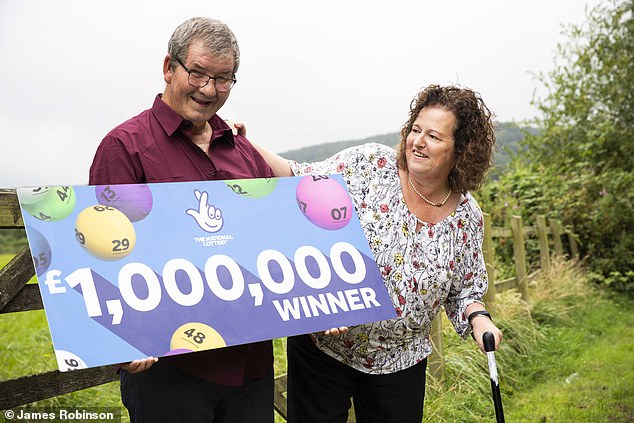 The couple are preparing to jet off first class to see friends and family in Canada, with some of their winnings also going on a new car

He said: ‘We’ve always worked hard and know the value of money but this is a number far beyond anything we could ever comprehend.

“We are not going to rush any of our decisions and will take things slowly but there are a few plans for our winnings.

‘Firstly a new car is on the cards, a Nissan Qashqai is top of the list, although as I currently drive a Ford Mondeo which has always seen me right, I might take a little browse around the Ford dealership too.’

Shelley added: ‘ We have friends and family in Canada who we thought we would only ever see online, certainly never in person.

‘I’ve never even been on a plane or left the country before, it’s crazy to think the first time I do it will be First Class all the way.’