Suspects are using the Covid-19 pandemic ‘as a weapon’ against officers, a police chief has said.

The warning comes amid a surge in vile coughing and spitting attacks on emergency workers, with one victim now having to self-isolate away from his ill mother as a result.

Adam Lewis was one of the first to be jailed for a coronavirus-related attack on Wednesday after he told a Met Police officer: ‘I am Covid and I am going to cough in your face and you will get it.’ 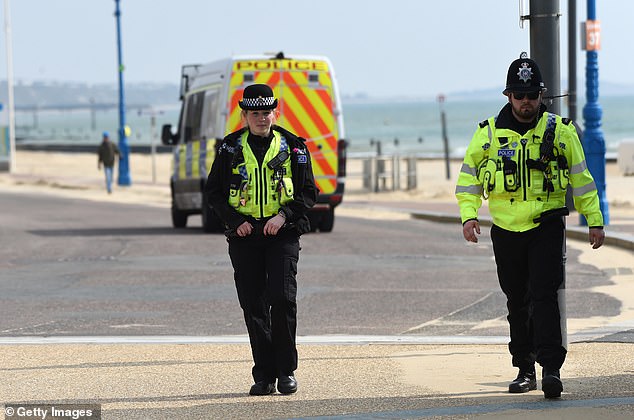 Officers on patrol, pictured, are increasingly being targeted by suspects using coronavirus ‘as a weapon’, a police chief has said

The 55-year-old had been approached in Westminster on Tuesday afternoon after a member of the public spotted a man trying the handles of car doors.

Lewis issued the verbal threat, then coughed on the officer – who was trying to keep him at arm’s length – making no attempt to shield his mouth, and fell to the floor.

The officer bent down to restrain him, while holding his head away from Lewis, who attempted to cough up phlegm, before trying to spit in his face.

Lewis also threatened to bite the officer shortly after telling the him he had a ‘bad disease’ and he was going to give it to him. 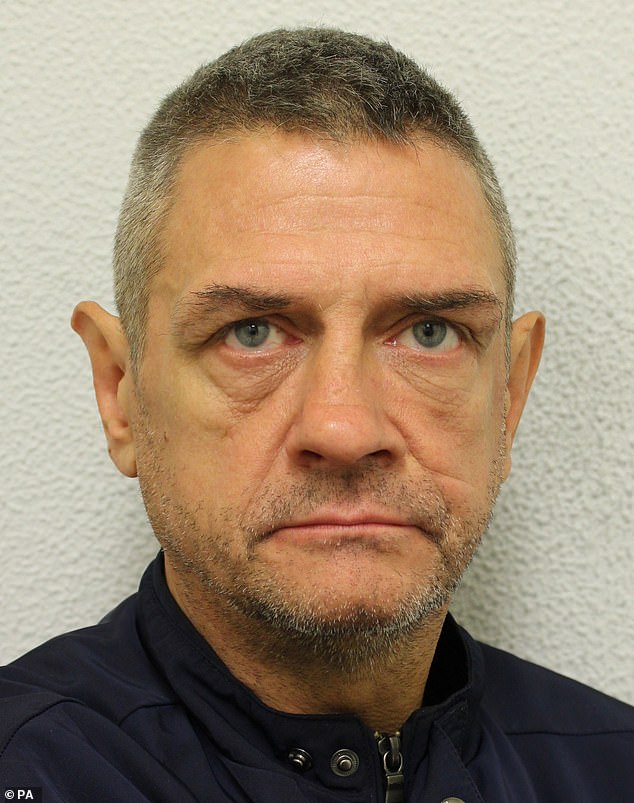 Adam Lewis, pictured, told officers: ‘I am Covid and I am going to cough in your face and you will get it’

Police said Lewis was arrested on suspicion of grievous bodily harm and taken into custody at a central London police station before being jailed for six months the following day.

Callum Heaton was also jailed this week for spitting at officers after claiming he had the deadly virus.

Police were called  to a report of a disturbance on Cog Lane in Burnley, Lancs, in the early hours of Saturday (March 28), where they arrested the 23-year-old for being drunk and disorderly. 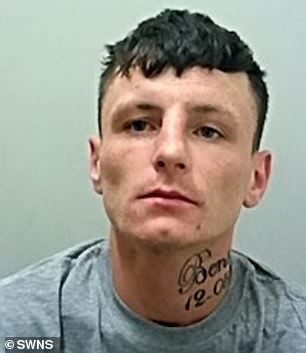 Callum Heaton, pictured, spat at two officers, claiming he was infected with the virus, and continued to do so while he was taken into custody

However, during the arrest Heaton spat at two officers claiming he was infected with Covid-19, and continued to do so while he was taken to custody.

On Monday he pleaded guilty to two counts of assault on an emergency worker and one of criminal damage before being sentenced to 12 months in prison.

In another similar incident, two more yobs who spat at officers have appeared in court.

Scott Sanders, 36, was arrested last Friday night over a disturbance at an address in Bournemouth.

While being detained at the local police station Sanders spat at the custody sergeant.

Sanders, who was also in breach of a previous suspended prison sentence, admitted to assaulting an emergency worker and was jailed for six months by magistrates in Poole.

Adam Power, 37, was arrested last Sunday for stealing a bottle of wine from a Co-op store in Bournemouth.

While in a holding cell he attempted to spit at a police officer and kick them in the ankle.

Power admitted charges of assaulting an emergency worker, theft and criminal damage and was jailed for five months. 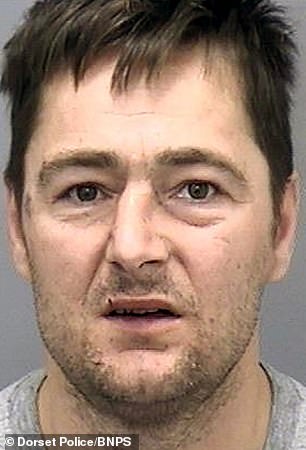 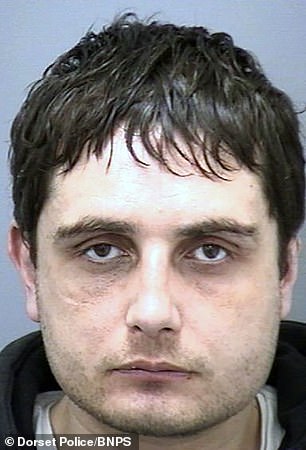 Adam Power, pictured left, and Scott Sanders, pictured right, both tried to spit at officers while in custody

Officers in Leigh-on-Sea, Essex were also kicked, coughed at and spat on over the weekend.

Andrew Tilley, 28, of Pall Mall, Leigh-on-Sea, appeared at Chelmsford Magistrates’ Court on Monday, where he pleaded guilty to two counts of assault by beating of an emergency worker and one count of common assault on an emergency worker, assault by beating, drink driving, criminal damage, driving with no insurance or a licence and failing to stop.

He is due to be sentenced on Tuesday, April 21.

Also on Saturday, Essex officers were coughed at and bitten while arresting a 25-year-old man from Ongar.

The suspect, who was held on suspicion of theft, common assault on an emergency worker, common assault, criminal damage, failing to stop and possession of cannabis has been released on bail until Wednesday, April 8.

The spate of attacks has forced a number of senior officers from forces around the country to speak out. 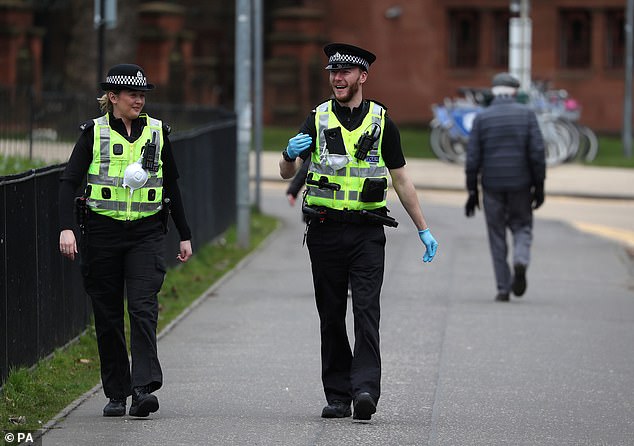 Northamptonshire Police Chief Constable Nick Adderley wrote on Twitter after an incident: ‘So a reality check: One of my officers was spat at and coughed over last night by a male claiming to have Covid-19.

‘The officer is a primary carer for his mother who has cancer. He will now need to self isolate and will no longer be able to care for his mum.

‘Full welfare support put in place and we will support his mum where we can. We are working with the CPS to expedite such cases and to ensure that the maximum penalties and sanctions are imposed.

‘Disgusting, demeaning and potentially life threatening assault on our colleague.’

Essex Police’s Assistant Chief Constable Paul Wells said: ‘Unbelievably, this weekend we have seen suspects using the Covid-19 virus as a weapon against officers – who, in these incredibly challenging times continue in their duty to keep the community safe.

‘In just a 12-hour period, we had officers who had been kicked, spat and coughed at after responding to emergency calls from shop workers, who were also just doing their job. 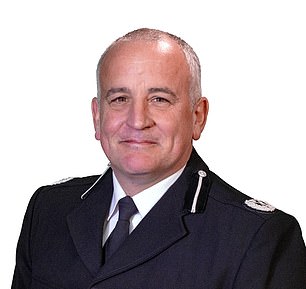 Essex Police’s Assistant Chief Constable Paul Wells, pictured, said anyone who assaults an emergency worker, by any means, will be brought to justice

‘Fortunately incidents like these remain rare but anyone who decides to assault an emergency worker, by any means, will be arrested, will be brought into custody and will be put before a court.

‘I’m pleased to say that the majority of people we have spoken to – be it on patrol, engaging with the community or responding to calls for help – have welcomed, thanked and embraced us and recognised the fact that we all need to work together.

‘It’s everyone’s job to stay at home to keep our communities safe, protect the NHS and save lives.

‘We will continue, as always, to keep you safe, to help you and to catch anyone determined in breaking the law.’

Sergeant Stephen Taylor, Essex Police Federation chairman, added: ‘Our role is to help people and keep them safe and there are simply no excuses for assaulting officers.

‘To be spat and coughed at during these unprecedented times is not acceptable.

‘This week a man has found himself in court for assaulting emergency responders and he faces a likely custodial sentence at court next month.’