The Victorian government has rejected a critical crossbench demand to extend the state of emergency powers, hitting a major roadblock in negotiations.

Health Minister Jenny Mikakos on Thursday rejected a plan to establish a parliamentary oversight committee to scrutinise the government's response to the COVID-19 pandemic and the effectiveness of programs designed to stimulate the economy. 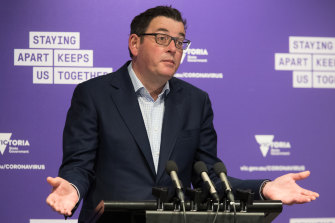 The committee proposal was part of a key crossbench compromise amid negotiations with the government over its attempt to extend state of emergency provisions for 12 months.

Crossbench MPs and the Opposition had demanded the establishment of an oversight committee separate to PAEC, with some arguing for a six-month extension, while others also thought even that was a step too far.

Reason Party MP Fiona Patten led the charge on establishing the oversight committee, separate to the Public Accounts and Estimates Committee, which was already inquiring into the government's response to the pandemic, but was chaired by a Labor MP.

Ms Patten's proposed COVID-19 Response and Recovery Committee would have had four non-government MPs, three Labor MPs, and be chaired by a crossbench parliamentarian.

However, that demand was flatly rejected, Ms Patten said, adding Ms Mikakos had instead offered to extend PAEC, which is due to table its final report on October 31.

"I am hopeful that the Premier and Health Minister will see that the COVID-19 select committee is not a government-bashing exercise," she said.

"Of course it provides oversight, but also looks at ways we can stimulate the economy and help businesses open up when it's safe and find ways to assist the vulnerable."

Earlier in the day, Premier Daniel Andrews appeared confident he was close to inking a deal with the crossbench, saying the government was "having very productive discussions" with upper house politicians, and described the process as "positive".

Mr Andrews has endured a storm of criticism since announcing on Monday that he wanted a 12-month extension of Victoria's state of emergency powers, which he says are needed to get through the prolonged crisis and would put the state in line with arrangements in other states, which are in effect open-ended.

The Premier must negotiate a deal by early next week when Parliament is due to sit and vote on an extension to the emergency powers, which are set to expire on September 13. 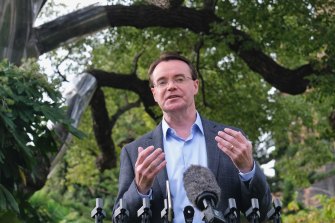 Opposition leader Michael O’Brien said his party would not give a “blank cheque” to Premier Daniel Andrews. Credit:Luis Ascui

"Victorians want to see a plan to get us out of this state of emergency, Daniel Andrews has only got a plan to keep us in it."

Mr O'Brien said the government had not spoken to the Coalition to negotiate a deal on the legislation.

The Premier has argued state of emergency provisions need to be extended if the Victorian economy is to open up, stressing the extension of powers would not mean extending the lockdown.

"If you want to open up the economy, and that's exactly what we want to do, you've got to have a framework [that will enable you to] open up, save jobs, create new jobs, see businesses through this and see us in that COVID normal," Mr Andrews said.

The Premier said he hoped to soon lay out a "road map" for easing coronavirus restrictions after the state recorded its lowest daily COVID-19 daily case total in almost two months. There were 113 new cases and a further 23 deaths.

The Opposition has also called for an urgent meeting of Parliament's scrutiny committee to review draft legislation to extend the state of emergency orders.

Liberal upper house MP Edward O'Donohue has written to the Labor chair of the Scrutiny of Acts and Regulations Committee, Mark Gepp, urging Parliament not to consider the government's bill without the committee's analysis.

"Never before has a Victorian Premier asked for so much power to be transferred from the Parliament to the Executive," Mr O’Donohue said in his letter.

"Before his request is considered, the risks and consequences for the rights of Victorians must be fully understood."

The committee generally scrutinises legislation after they are introduced into Parliament.

critical, Demand, em, of, on, State
You may also like: