Havana: As Cubans held a funeral for an art instructor and her small child who were killed in Cuba's worst plane crash since 1989, authorities revealed that the Mexican charter company whose 39-year-old plane crashed had been the subject of two serious complaints about its crews' performance. 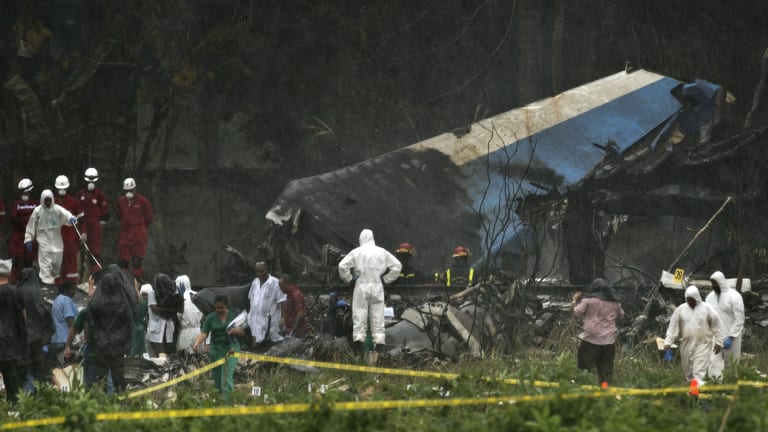 Rescue teams search through the wreckage site of a Boeing 737 that plummeted into a cassava field with more than 100 passengers on board, in Havana, Cuba.

The mother and child were the first of 67 Holguin residents to be brought home for burial out of the 110 people who died in the fiery crash in Havana over the weekend.

Meanwhile, Mexico's government saidits National Civil Aviation Authority would carry out an operational audit of Damojh airlines to see if its "current operating conditions continue meeting regulations" and to help collect information for the investigation into Friday's crash in Cuba.

The plane that crashed, a Boeing 737, was barred from Guyanese airspace last year after authorities discovered that its crew had been allowing dangerous overloading of luggage on flights to Cuba, Guyanese Civil Aviation Director Capt. Egbert Field said.

The plane and crew were being rented from Mexico City-based Damojh by EasySky, a Honduras-based low-cost airline. Cuba's national carrier, Cubana de Aviacion, was also renting the plane and crew in a similar arrangement known as a "wet lease".

Cuban Transportation Minister Adel Yzquierdo Rodriguez told reporters Saturday afternoon that Cubana had been renting the plane for less than a month under an arrangement in which the Mexican company was entirely responsible for maintenance of the aircraft.

Yzquierdo said it was routine for Cuba to rent planes under a variety of arrangements because of what he described as the country's inability to purchase its own aircraft due to the US trade embargo on the island.

He said that with Damojh, "the formula here is that they take care of the maintenance of the aircraft. That's their responsibility."

He said Cuba didn't have pilots certified to fly the Boeing, so it had hired the Mexican crew with the expectation that they were fully trained and certified by the proper authorities.

The fiery crash of the ageing Boeing passenger jet shortly after take-off from Havana on route to Holguin on Friday has stunned the Caribbean island nation where prayers were given for the dead and three survivors at services across the country.

The survivors, all women, are in critical condition, and their progress is being closely followed by many Cubans through regular hospital updates.

"Everyone is hoping and praying for them," said retired Havana telephone operator Marlen Rodriguez Rebasa.

"Everyone is very attentive and wants them to survive. They are very young and have families."

Sunday marked the second and last day of official mourning for the victims, which included 99 Cuban passengers, three foreign tourists – two Argentines and a Mexican – and two Sahrawi residents in Cuba.

The company has come under scrutiny due to allegations of previous safety problems and complaints by former employees.

Investigators continued to comb wreckage on Sunday, some 20 kilometres from downtown Havana, searching for a second black box containing mechanical data. The cockpit voice recorder was recovered in good condition on Saturday.

as, begins, bury, crash, cuba, Dead, It’s, over, plane, questions, raised, to
You may also like: