A dad-of-two lost his leg and was left fighting for his life after catching a deadly infection ‘from an ingrown hair’.

Mark Nagel, 53, gained 45lbs in one leg and went temporarily blind within two weeks of contracting lethal necrotizing fasciitis in his left thigh.

The bacteria is believed to have entered his system through an ingrown hair and multiplied in an ’empty space’ created when he slipped and pulled a muscle.

It left Mark, from Saint Paul, Minnesota, US, suffering from a dull aching pain which intensified as the virus ate through his flesh. 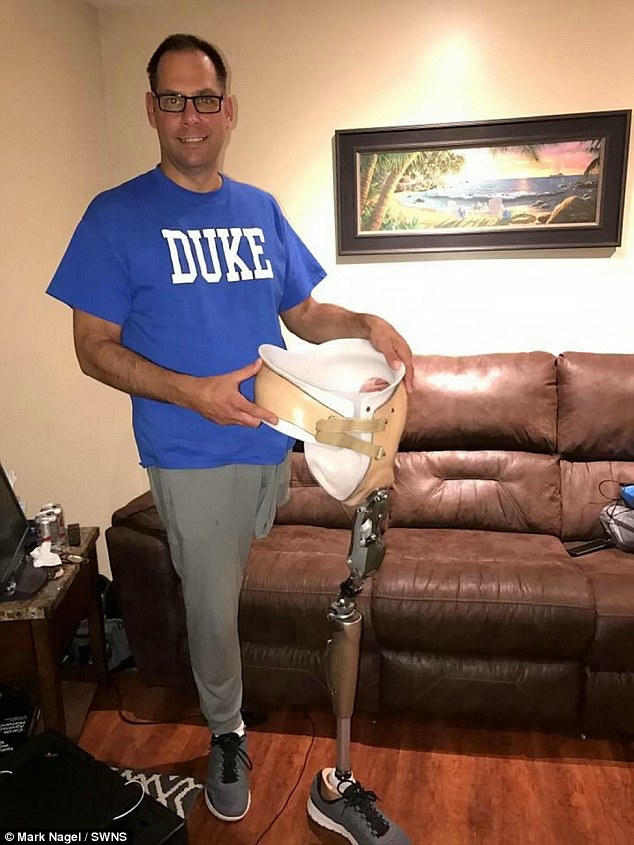 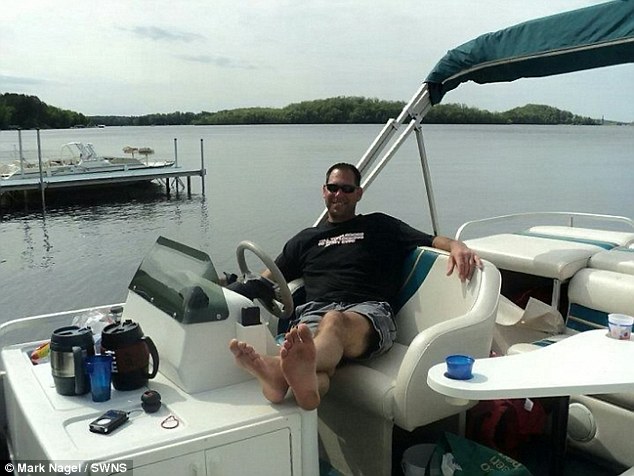 Within two weeks of the fall Mark’s vision had vanished and he was in agony.

His terrified wife Tammy Nagel, 52, dialled 911 and he was rushed to hospital, where doctors warned his life was at stake.

Mark then underwent six surgeries to remove the diseased flesh, while his family and friends – as many as 35 people at once – camped out by his bedside to show support.

Fortunately he beat the rare disease, which has a 27 percent survival rate, but medics were forced to amputate his left leg from the pelvic bone down to stop further spread.

Mark spent the year after contracting the disease in January 2017 relearning how to walk with a prosthetic limb and undergoing reconstructive work.

Project developer Mark described the ordeal as ‘scary’ but said he is thankful to be alive.

He said: ‘I had never heard of the virus before.

‘When I Googled it online, I remember thinking that the mortality rate of sufferers – and the fact that it’s called a flesh-eating disease – was scary. 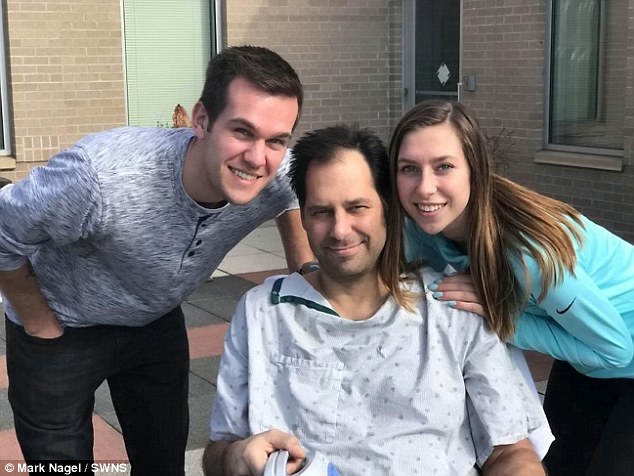 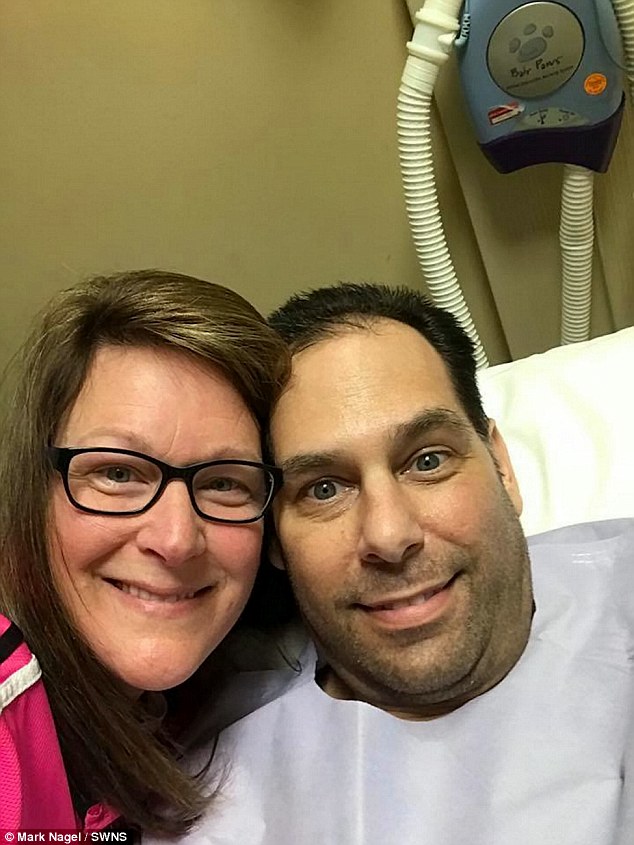 ‘Normally that wouldn’t be a big deal because your immune system fights it but it found an opening in that space where there was a pulled muscle and it gave it space to grow.’

Mark began to experience pain at the beginning of last year after slipping on ice while walking his Golden Retriever, Dakota, and pulling his muscle.

He said: ‘My leg started to swell, and it was difficult to walk on it because started to stiffen up.

‘Over a two-week period I had gained 45 pounds in my leg.

‘The infection had basically consumed all of the hydration in my body. I got so dehydrated that I went blind and was on the verge of passing out.’

Doctors at Regions Hospital, Minnesota, US, performed a CT scan which showed Mark was suffering from necrotizing fasciitis.

Mark said: ‘The surgeon said he would open my leg and would see the virus growing while he was working on it.

‘They realised it was moving so fast there was no way to save the leg.

‘After six surgeries they got rid of the infection, and had removed everything right up to my pelvic bone.’

The dad-of-two spent another month in hospital, before finally returning home in March. 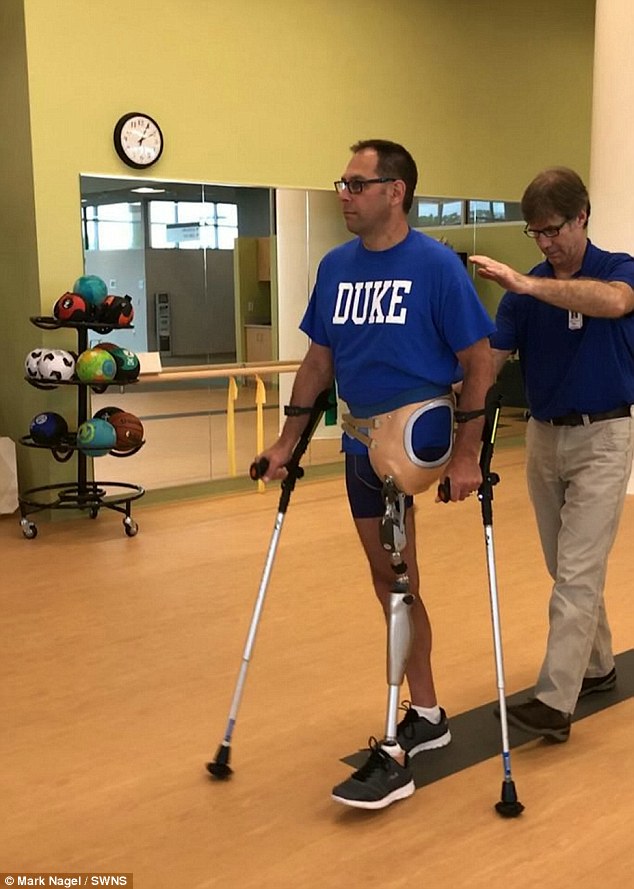 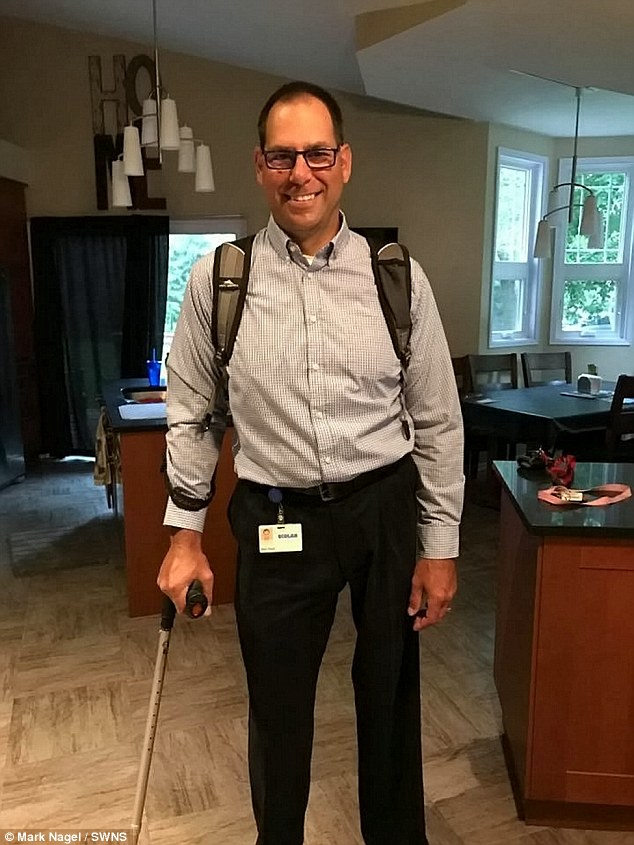 Mark said he and his family have now moved to a single-storey home and he has even managed to return to work. Pictured here on his first day back

He said: ‘As soon as the hospital stuff was done we started figuring out what it meant for our lives.

‘Our house had five levels of stairs, so we put it up for sale and bought another home that’s single-storey.

‘We sold our RV because it wasn’t going to conducive to moving with crutches.

‘We had to make a whole bunch of changes, but everything turned out fine.’

Brave Mark, who is dad to Rachel, 21, and Mitch, 23, has remained positive in despite the emotional trauma.

‘You just have to overcome this stuff. You can’t let it get you down,’ he added.

‘I can deal with only having one leg because it is much better than the alternative – I’m alive.’

catching, Dad, dea, leg, loses, two
You may also like: