Could there be any more devastating indictment of our net-zero obsessed political class than that Britain is riding its luck when it comes to keeping our homes warm and the lights on?

This is a modern country rich in natural resources. Yet the National Grid warns households could face three-hour blackouts this winter, with factories mothballed, to save electricity amid gas shortages.

To anyone who muddled through by candlelight during the power cuts of the 1970s, this might not sound too troubling. But with society so reliant on electricity, it would be catastrophic to our frail economy. 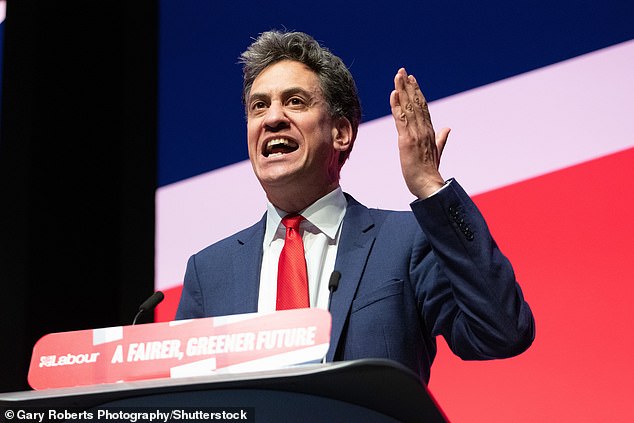 Ed Miliband is the hypocritical architect of this appalling mess

The reason, of course, is that our politicians blindly bought into the argument of the climate change brigade.

That has left us at the mercy of unreliable renewables and imports from oil and gas-rich regimes which could turn off the tap at any moment, as Vladimir Putin has proved.

But while politicians of all stripes have spent years virtue-signalling their green credentials (not least Labour’s Ed Miliband, the hypocritical architect of this appalling mess), it’s ordinary families who are paying the price through eye-watering bills.

Mercifully, Liz Truss is prioritising energy security – increasing nuclear and domestic fossil fuel production, including fracking. But even if NIMBYs allow it, we will not reap the rewards for several years.

What a damning state of affairs that a developed country can do nothing but pray this winter is a mild one.

It’s natural in a free market that mortgage lenders should seek to turn a profit. After all, they take on risk by loaning homebuyers money. Yet the speed with which mortgage rates have soared to a punishing 6 per cent following Chancellor Kwasi Kwarteng’s bungled mini-Budget is frightening.

Many families already struggling with the cost of living crisis face hundreds of pounds being added to their monthly repayments, while first-time buyers will find it more difficult to get home loans.

Now the panic has subsided, lenders are said to be gleefully charging a ‘Kwarteng premium’ on mortgage interest rates. The Chancellor was right to raise concerns with high street banks. In challenging economic times, profits must not become profiteering.

After 27 migrants drowned in the Channel last November, the French president vowed ‘to do everything possible’ to prevent the deadly crossings.

Yet despite tens of millions of pounds of British taxpayers’ money being diverted to French coffers to help patrol the coastline, this tide of human misery continues.

Now we learn Emmanuel Macron will take back the migrants – a move which would smash the people-smuggling gangs’ business model – only if the UK backs down on the Northern Ireland protocol.

How utterly sickening. This Napoleonic retread wastes no opportunity to warn Britain, without justification, not to ‘exploit’ the crisis. Yet he’s the one playing politics with migrants’ lives.