No to the Customs Union, but yes to a customs compromise: DAMIAN GREEN insists Britain must maintain close links with its neighbours 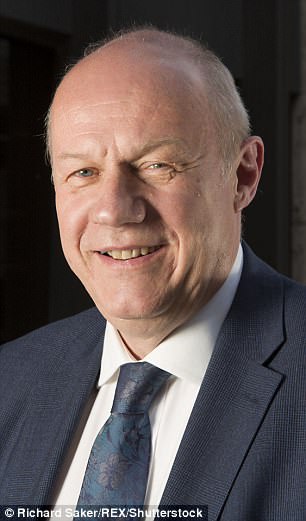 One of the greatest political delusions of our age was the idea that holding a referendum on our EU membership would settle the argument once and for all.

Instead it has left us with a long drawn-out negotiation process, and a national argument that is becoming more heated, unreasonable and borderline abusive on both sides.

I have never sat on the fence about this. I was on the board of the Stronger In campaign, and I fought as hard as anyone for Britain to stay in. If the referendum was held next month I would argue the same case.

However we are not (thank God) going to have another referendum. If we did, and the result changed, what next? Best of three? We can’t ask the world to stop while we dither for a decade or so.

My side lost, and what depresses me is that some of my former campaign colleagues have become stuck at the stage of grief which involves denial. I think the way to serve the country is to make the best of the verdict. This means forming a friendly partnership with the other European countries, while becoming an even more outward-looking country with positive relations around the world. In particular we need the ability to trade freely. That’s how we will be a rich country in the future, as in the past.

The negotiations were always going to be difficult, and we can now observe a regular pattern.

Between negotiating sessions Michel Barnier and the European Commission’s team issue blood-curdling threats about how the British ideas are impractical, and how the whole process is under threat. Here, politicians and journalists who want the process to fail announce this means we are all doomed. David Davis and Theresa May stay patient, and when the crunch point is reached a deal is done, and negotiations move on.

This happened throughout last year, and there is no reason to believe this year will be different.

The key phrase here is ‘a deal is done’. Doing a deal involves neither party getting their own way completely. We wanted a transition period after March 2019. We suggested two years, but the Commission wanted it to end in December 2020, because that’s when their new budget period starts. That’s a sensible compromise. Originally Mr Barnier said we would owe up to 100 billion euros. Some said we shouldn’t pay a penny. We have ended up at around 40 billion euros. Again, a sensible compromise.

So now we move on to this month’s ‘crisis’: whether we should stay in the Customs Union or not. I hate to remind my fellow Conservatives of the Election Manifesto we were all fighting on this time last year, because it did not prove an unalloyed success. But it is pretty clear on this point.

It says: ‘As we leave the European Union we will no longer be members of the single market or Customs Union but we will seek a deep and special partnership including a comprehensive free trade and customs agreement.’

What should this mean in practice? Of course I have not become a hard-line Brexiteer in the last two years and I want as close a relationship as possible with our neighbours. I want Britain to stay closely aligned to the EU on tariff rates, recognition of health and environment standards and the levels of border checks, because it is in Britain’s interest to do so.

Like everyone, I am concerned about the Irish border and the Good Friday Agreement, but as a Kent MP I am also concerned to keep lorries flowing freely through the Port of Dover and the Channel Tunnel. If they don’t, Kent becomes a lorry park and life for those of us who live there becomes very unpleasant.

It won’t be the Customs Union, but it will be a mutually beneficial customs arrangement. It will be another sensible compromise which will contribute to the success of the negotiations.

I would urge those who share my broad views on Britain and the EU to start contributing to the debate in more practical terms. Britain can thrive in the post-Brexit era, but maintaining close links with our neighbours will make a significant contribution to national success.

What would undoubtedly be a national disaster would be any political action which made it more likely that a hard-Left Corbyn Government came to power. That would not just wreck our economy, but, looking at the way dissident Labour MPs are being hounded and abused, damage our whole democracy.