Jerusalem: The criminal trial for Prime Minister Benjamin Netanyahu will begin on March 17, court officials said on Tuesday, shaking up the final stretch of a contentious election campaign and hurting the longtime Israeli leader's hopes of forming a new government after the vote.

The announcement means that Netanyahu will appear in the Jerusalem court as a defendant just two weeks after the March 2 election. After a campaign in which he has worked feverishly to divert attention from his legal woes, the final days of the race are almost certain to play into the hands of his opponents by focusing on the looming trial. 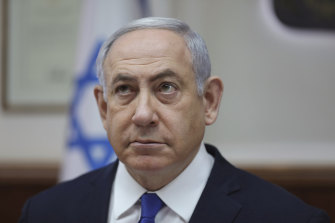 Netanyahu was indicted in November on charges of fraud, breach of trust and accepting bribes in connection to a series of scandals. He is accused of accepting lavish gifts from billionaire friends, including from Australia's casino mogul James Packer, and offering regulatory favours to local media moguls in exchange for positive news coverage. Netanyahu, Israel's longest-serving prime minister, has denied any wrongdoing.

In a brief statement, the court said Netanyahu was expected to attend the initial hearing.

The election is Israel's third in under a year. Like the previous elections in April and September, the upcoming vote is seen largely as a personal referendum on Netanyahu. 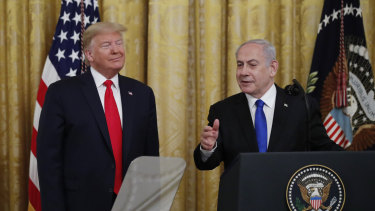 Israeli Prime Minister Benjamin Netanyahu speaks during an event with US President Donald Trump in the White House last month.Credit:AP

The previous elections ended in deadlock, with both Netanyahu's Likud Party and the rival Blue and White, led by former military chief Benny Gantz, unable to secure parliamentary majorities. Opinion polls have predicted a similar outcome in the third.

Gantz said it was a "sad" development that would prevent Netanyahu from focusing on his prime ministerial duties.

"Netanyahu will be preoccupied with himself alone. He will not be in a position to look out for the interests of Israel's citizens," he said.

Netanyahu responded to Gantz's remarks by criticising him without directly addressing the trial.

Netanyahu is desperate to remain as prime minister, a position he can use as a bully pulpit to rally public support. He has repeatedly sought to portray himself as the victim of a witch hunt by overzealous police, hostile prosecutors and the media.

Except for the prime minister, Israeli law requires public officials to resign if charged with a crime. That means that if Netanyahu is forced to give up his position, he would go on trial as a private citizen. Netanyahu last month dropped an attempt to seek immunity from prosecution after concluding he did not have enough support in parliament.

Throughout the current campaign, Netanyahu has gone to great lengths to make voters forget about his trial. Instead, he has sought to paint himself as a global statesman uniquely qualified to lead the country through tumultuous times.

He boasts of Israel's emergence as a natural gas exporter, his strategy of confronting archenemy Iran and warming behind-the-scenes alliances with former Arab foes in the Persian Gulf.

But more than anything, he points to his close friendship with US President Donald Trump, bragging that it gives Israel a unique opportunity to push its international agenda. Just three weeks ago, Netanyahu was welcomed at the White House for a festive event unveiling Trump's long-awaited Middle East plan. The plan greatly favoured Israel at the expense of the Palestinians.

Netanyahu then jetted off to Moscow, where he leveraged his good relations with President Vladimir Putin to win the release of a young Israeli woman who had been jailed on minor drug charges. In recent days, he has turned inward, promising young Israelis that he will lower the high cost of living and assuring voters the country is prepared for the coronavirus scare.

Gantz, meanwhile, has focused his campaign almost entirely on Netanyahu's legal troubles and questioning his fitness to serve.

Yohanan Plesner, president of the Israel Democracy Institute, a Jerusalem think tank, said it was difficult to predict how the scheduling of the trial will impact the election.

Although the country has long known Netanyahu would go on trial, the setting of the date draws new attention to his legal troubles and makes it the central issue of the final stretch.

The bigger impact of Tuesday's announcement could come after the election.

Under Israel's parliamentary system, the prime minister must form a majority coalition with smaller allied parties in order to rule. Opinion polls are once again predicting that both Gantz's Blue and White and Netanyahu's Likud will emerge as the largest parties, but still short of securing the necessary parliamentary majority with their partners.

Together, the two parties could control a majority of seats and form a unity government. Gantz has repeatedly said he is open to a power-sharing agreement with Likud, but not under Netanyahu's leadership when he is facing serious criminal charges. The odds of Gantz compromising are even lower now that the trial is imminent.

Other parties, and perhaps even members of the Likud, may also be reluctant to line up behind a prime minister on trial.

That could turn attention to President Reuven Rivlin, who is responsible for choosing a prime minister-designate after the election.

The president typically holds several days of consultations after the election before choosing the head of the party who he believes has the best chances of forming a coalition. The designated prime minister is then given up to six weeks to negotiate a coalition deal with his partners, meaning Netanyahu's trial will begin in the middle of this sensitive period.

After the last two elections, Rivlin gave Netanyahu the first crack at forming a government, and in September, he floated a power-sharing proposal in which Netanyahu and Gantz would rotate as leaders, with Netanyahu serving first.

Unless Likud defies the polls and scores an overwhelming victory, it will be difficult to tap Netanyahu as the prime minister-designate days before he goes on trial, Plesner said.

"The President's roadmap for how to form a coalition no doubt will now dictate that Gantz would be first, rather than Netanyahu," he said.

Cloud, Date, for, Netanyahu, trial
You may also like: