David Davis warns Theresa May that her ‘third way’ is unworkable

David Davis has warned Theresa May that her ‘third way’ plan for Brexit is unworkable, it was reported last night.

The Brexit Secretary is said to have sent the Prime Minister a letter outlining his opposition to proposals to be presented to the Cabinet tomorrow.

He is said to be concerned that the EU will simply reject the plan out of hand.

The letter warned the compromise the Prime Minister intends to present will fail because it is simply a customs partnership with extra technological elements.

And it expresses fears that Brussels has already rejected the idea of allowing a third-party country – as Britain will be after Brexit – to police EU borders and that discussing such an option is a waste of time. 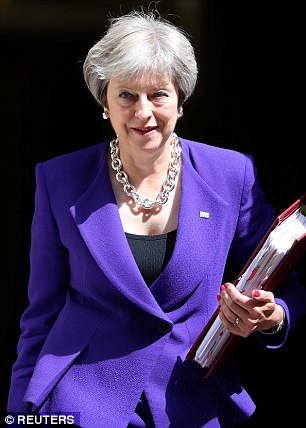 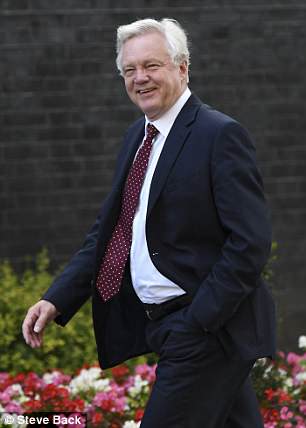 David Davis has warned Theresa May that her ‘third way’ plan for Brexit is unworkable, it was reported last night

Sources told The Daily Telegraph that Mr Davis is understood to be frustrated that Mrs May and her chief negotiator Olly Robbins are refusing to acknowledge the EU’s position, setting up the UK to fail.

One said: ‘This plan would be like Donald Trump allowing us to keep an eye on his borders for him, it will never happen. We need to have this row in the now so that we have time to negotiate something bespoke with heads of state before it’s too late’.

The letter is being seen as an attempt to avoid Cabinet resignations at the Chequers summit on Friday. It points out that the four freedoms of the EU, including freedom of movement, are indivisible.

Mr Davis is understood to fear that discussing the plan at Chequers would delay progress because the EU will inevitably reject it – sending the UK back to the drawing board. 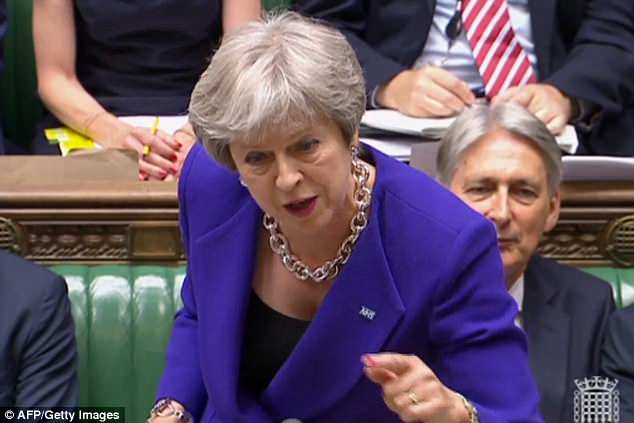 In the Commons, Mrs May was challenged by Tory MPs to make it clear she would not backtrack on previous Brexit pledges

Mr Davis’s spokesman did not respond to calls last night.

Britain would secure the right to set its own tariffs and trade policy under the ‘third way’ option.

Britain would leave the EU’s ‘common external tariff’, allowing parliament to set its own tariff rates. This was a key demand from Brexiteer ministers. Sources said British tariffs would apply to 96 per cent of imports. For a small proportion of ‘unfinished goods’ destined for the EU, the UK would apply EU tariffs and collect them on Brussels’ behalf. EU tariffs would also apply to goods that simply transit through British ports.

UK would agree to maintain ‘full regulatory alignment’ with Brussels on goods. This was demanded by Business Secretary Greg Clark and Chancellor Philip Hammond as vital for ‘frictionless trade’. But many Eurosceptics believe it would wreck hopes of new trade deals. Parliament would retain a fig leaf of control with the ultimate ability to tear up the deal but this would come at the price of losing trade access.

The PM told MPs that ending free movement remains a red line in negotiations. But some ministers are pushing her to trade access to the British jobs market for access to Europe’s single market.

Mrs May said that the deal would allow the UK to set an ‘independent trade policy’, allowing Britain to slash tariffs on imports as part of new deals. But it is far from clear that Brussels would agree to a deal that would allow the UK to be a low-tariff island with full access to EU markets. Pro-Brexit MPs say that without the freedom to change rules, the prospects for new trade deals may be slim.

Whitehall sources last night dismissed reports that the compromise plan would force the UK to continue to impose EU tariffs after Brexit – an idea that would have wrecked hopes of striking new trade deals.

Instead, 96 per cent of imports would be covered by tariffs set by the British parliament.

Sources also denied claims that Theresa May is prepared to compromise on free movement in order to secure a better trade agreement.

But they acknowledged that she will ask ministers to sign up to the idea of ‘full regulatory alignment’ with the EU on goods in order to increase the chances of a ‘frictionless’ trade pact with Brussels and resolve the Northern Ireland border problem.

The move will alarm Eurosceptics, who warned yesterday that it could limit the UK’s ability to strike new trade deals. The third way is so called because it is a compromise between a ‘maximum facilitation’ deal backed by Brexiteers, which would slash customs controls and barriers, and a new customs partnership, which is backed by Remainers.

In an effort to calm nerves, No 10 offered to take the highly unusual step of briefing MPs on the Chequers agreement on Saturday morning.

Mrs May will warn ministers tomorrow they have to come up with a proposal that will not be rejected out of hand by Brussels and Remainers in Parliament.

Some pro-Brexit ministers believe there is no need to kill the proposal because it will be blocked by the EU, which has insisted that the UK cannot have full access to the single market unless it accepts free movement and the full EU rulebook.

Mrs May will today try to persuade German Chancellor Angela Merkel not to dismiss the proposals.

A group of more than 40 Tory Eurosceptic MPs held a stormy meeting with Chief Whip Julian Smith to warn they would not accept a deal that keeps Britain in the EU in all but name.

Andrea Jenkyns, who quit the Government to speak out on Brexit last month, urged Eurosceptic cabinet ministers to ‘show their steel’.