Gaza City, Gaza Strip: In a jarring contrast, Israeli forces shot and killed at least 55 Palestinians and wounded thousands during mass protests Monday along the Gaza border, while just a few kilometres away Israel and the US held a festive inauguration ceremony for the new American Embassy in contested Jerusalem. 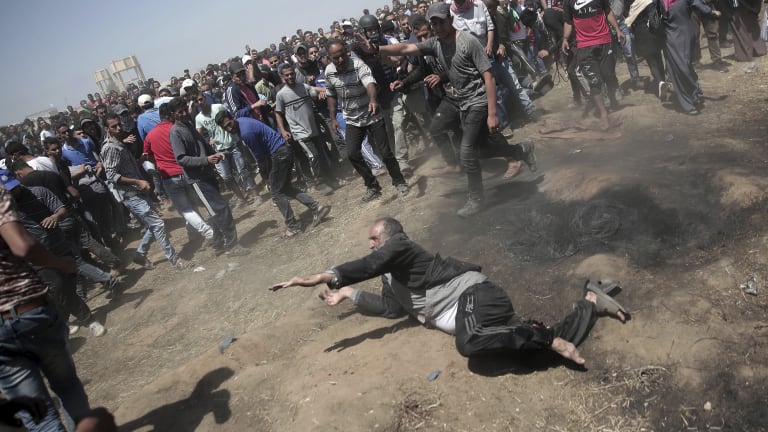 An elderly Palestinian man falls on the ground after being shot by Israeli troops.

Throughout the day, Gaza protesters set tires ablaze, sending thick plumes of black smoke into the air, and hurled firebombs and stones toward Israeli troops across the border. The Israeli military, which has come under international criticism for using excessive force against unarmed protesters, said Hamas tried to carry out bombing and shooting attacks under the cover of the protests and released video of protesters ripping away parts of the barbed-wire border fence.

"What we saw today was unprecedented violence along the fence," said Brigadier General Ronen Manelis, the chief military spokesman, defending the tough Israeli response. "We are protecting Israel's citizens. We are defending our homes."

Monday's protests culminated more than a month of weekly demonstrations aimed at breaking a crippling Israeli-Egyptian border blockade. But the US Embassy move, bitterly opposed by the Palestinians, added further fuel. 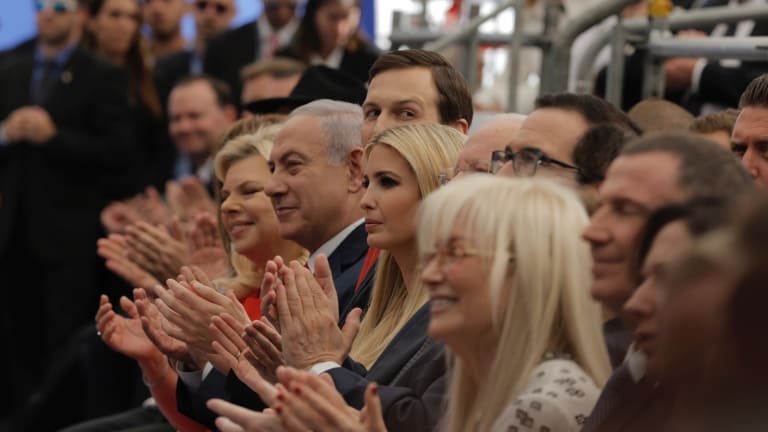 In a videotaped address, Trump said the embassy move, a key campaign promise, recognises the "plain reality" that Jerusalem is Israel's capital. Yet he added the United States "remains fully committed to facilitating a lasting peace agreement." 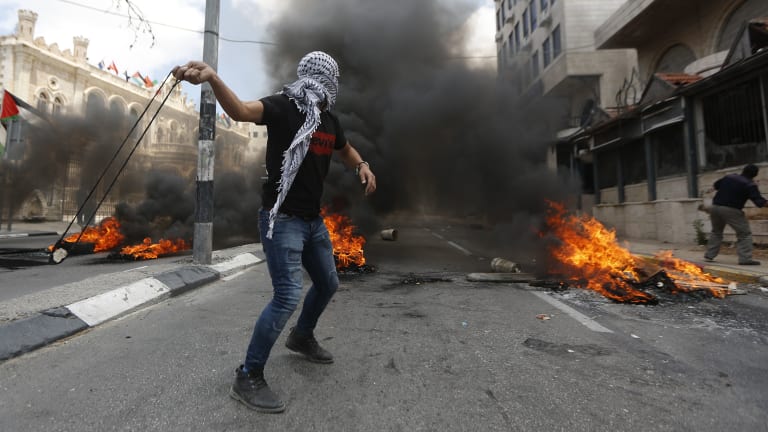 But Monday's steadily climbing death toll and wall-to-wall condemnation of the embassy move in the Arab world raised new doubts about Trump's ambitions to broker what he called the "deal of the century." More than a year after taking office, Trump's Mideast team has yet to produce a long-promised peace plan.

Trump says recognising Jerusalem as Israel's capital acknowledges the reality that Israel's government is located there as well as the ancient Jewish connection to the city. He insists the decision has no impact on future negotiations on the city's final borders.

But to both Israel and the Palestinians, the American gesture is widely seen as siding with Israel on the most sensitive issue in their longstanding conflict.

"What a glorious day. Remember this moment. This is history," Netanyahu told the inauguration ceremony. 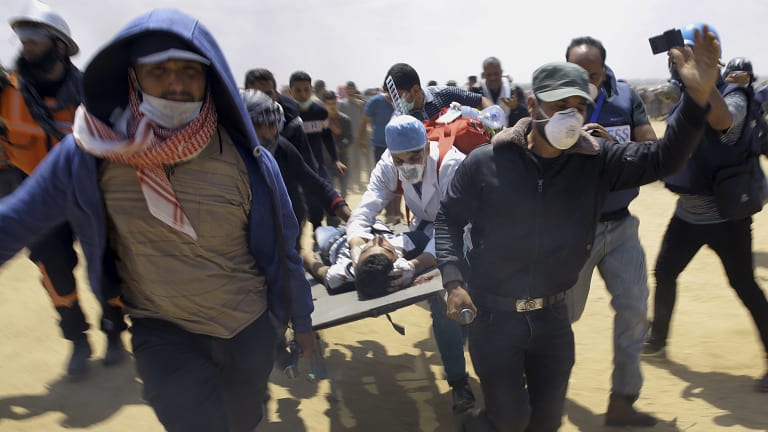 The Palestinians, who seek east Jerusalem as their capital, have cut off ties with the Trump administration and say the US is unfit to serve as a mediator. Israel captured east Jerusalem in the 1967 Mideast war and annexed the area in a move that is not internationally recognised.

Palestinian President Mahmoud Abbas, furious over the embassy ceremony, said he "will not accept" any peace deal proposed by the Trump administration.

The Palestinian president also urged the international community to condemn what he said were "massacres" carried out by Israeli troops in Gaza, and officials said the Palestinians would file a war crimes complaint against Israel in the International Criminal Court over settlement construction.

By nightfall, at least 55 Palestinians, including a young girl and four other minors, were killed, the Gaza Health Ministry said. It said 1204 Palestinians were wounded by gunfire, including 116 who were in serious or critical condition.

South Africa, a fervent supporter of the Palestinians, recalled its ambassador for consultations, the Israeli Foreign Ministry said.

The European Union's foreign policy chief, Federica Mogherini, called on Israel to respect the "principle of proportionality in the use of force" and show restraint, while also urging Hamas to ensure any protests remain peaceful. UN Secretary-General Antonio Guterres issued a similar appeal.

At the US Embassy ceremony in Jerusalem, Kushner placed the blame on the Gaza protesters.

"As we have seen from the protests of the last month and even today those provoking violence are part of the problem and not part of the solution," he said.

Israel says the blockade of Gaza, imposed by Israel and Egypt after Hamas overran the territory in 2007, is needed to prevent Hamas from building up its military capabilities. But it has decimated Gaza's economy, sending unemployment skyrocketing to over 40 per cent and leaving the territory with just a few hours of electricity a day.

The Israeli military estimated a turnout of about 40,000 at Monday's protest, saying it fell short of what Hamas had hoped for. But officials described what they called "unprecedented violence" unseen in previous weeks.

Although the crowd did not manage to break through, he said they caused "significant damage." The army released video showing demonstrators setting a cargo crossing on fire and appearing to climb on the fence as they lobbed flaming objects into the Israeli side. 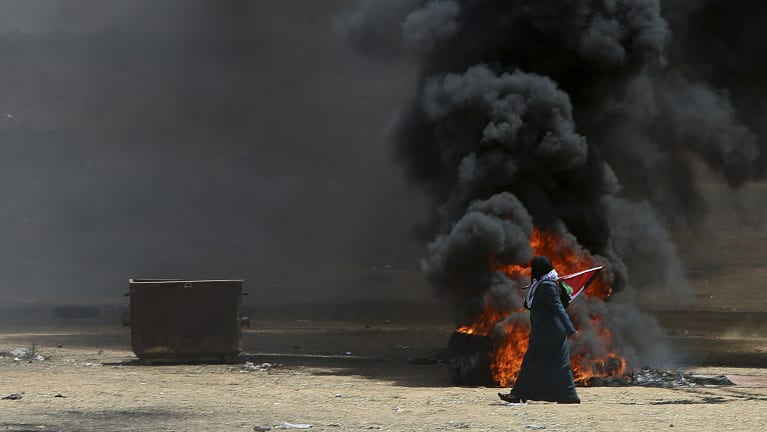 A Palestinian woman walks past burning tires near the Israeli border.

Monday marked the biggest showdown in years between Israel's military and Gaza's Hamas rulers along the volatile border. The sides have largely observed a cease- fire since the 2014 war – their third in a decade.

Since the protests began on March 30, 105 Palestinians have been killed, most of them protesters. Israel said it killed three militants trying to plant a bomb along the fence, and Palestinian security officials said several Hamas militants were also killed by Israeli shelling in northern Gaza.

Ismail Radwan, a senior Hamas figure, said the mass border protests would continue "until the rights of the Palestinian people are achieved."

Throughout the day, sirens wailed as the wounded were carried to ambulances. Groups of young activists repeatedly approached the fence, but were quickly scattered by gunfire and tear gas.

The timing of Monday's events was deeply symbolic to Israel and the Palestinians.

The US said it chose the date to coincide with the 70th anniversary of Israel's establishment.

But Tuesday also marks the anniversary of what Palestinians call their "nakba," or catastrophe, a reference to the uprooting of hundreds of thousands who fled or were expelled during the 1948 war surrounding Israel's creation. A day of mourning and mass funerals was planned Tuesday.

A majority of Gaza's 2 million people are descendants of refugees, and the protests have been billed as the "Great March of Return" to long-lost homes in what is now Israel.

The new embassy will temporarily operate from an upgraded, existing US consulate building, until a decision is made on a permanent location. Even the current location is sensitive, located partially in an area designated "no-man's land" in a 1949 armistice agreement. The UN considers that land to be occupied territory, though the US says in practice the area has been in continuous Israeli use since 1949.

Cloud, deadly, Embassy, gaza, in, Israel#x27;s, Jerusalem, opening, Protests, Us
You may also like: