Dementia on the retreat in the US and Europe

New York: Despite the lack of effective treatments or preventive strategies, the dementia epidemic is on the wane in the United States and Europe, scientists reported on Monday.

The risk for a person to develop dementia over a lifetime is now 13 per cent lower than it was in 2010. Incidence rates at every age have steadily declined over the past quarter-century. If the trend continues, the paper's authors note, there will be 15 million fewer people in Europe and the United States with dementia than there are now. 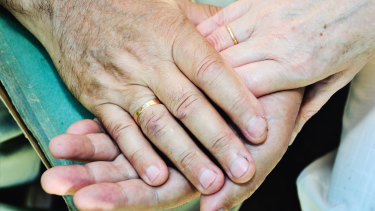 Dementia rates have fallen despite the lack of effective new treatments, a report shows.Credit:TNS

The study is the most definitive yet to document a decline in dementia rates. Its findings counter warnings from advocacy groups of a coming tsunami of Alzheimer's disease, the most common form of dementia, said Dr. John Morris, director of the Centre for Ageing at Washington University in St Louis.

It is correct that there are now more people than ever with dementia, but that is because there are more and more older people in the population.

The new incidence data are "hopeful," Morris said. "It is such a strong study and such a powerful message. It suggests that the risk is modifiable."

Researchers at Harvard University in Cambridge, Massachusetts, reviewed data from seven large studies with a total of 49,202 individuals. The studies followed men and women ages 65 and older for at least 15 years, and included in-person exams and, in many cases, genetic data, brain scans and information on participants' risk factors for cardiovascular disease.

The data also include a separate assessment of Alzheimer's disease. Its incidence, too, has steadily fallen, at a rate of 16 per cent per decade, the researchers found. Their study was published in the journal Neurology.

In 1995, a 75-year-old man had about a 25 per cent chance of developing dementia in his remaining lifetime. Now that man's chance declined to 18 per cent, said Dr Albert Hofman, chairman of the department of epidemiology at the Harvard School of Public Health and the lead author of the new paper.

Although it is often said that women are more likely to get dementia than men, Hofman and his colleagues found that men and women have equal dementia rates.

One puzzling aspect of the decline is that it seems to be confined to Europe and the United States — it was not seen in Asia, South America or, from limited data, in Africa. There have been reports of increasing dementia rates in Japan, China and Nigeria, the paper's authors note.

Those increases are puzzling, Hofman said. The trend may be related to higher rates of smoking, which makes dementia more likely, in those countries.

One leading hypothesis for the decline in the United States and Europe is improved control of cardiovascular risk factors, especially blood pressure and cholesterol. Nearly all dementia patients have other brain abnormalities, including blood vessel damage likely to be the result of high blood pressure.

Large swings in blood pressure are a risk at any age, he added.

Another possible reason for declining dementia rates might be better education, which is thought to have a protective effect by giving the brain more capacity — for example, a memory cache of more synonyms for words that were forgotten.

Like control of blood pressure and cholesterol, education levels have gradually improved over the past few decades. "There is a theory, but still not much evidence, that education shifts dementia to a later age," Hofman said.

The genetic risk factors for dementia cannot have changed, said Dr. Richard Hodes, director of the National Institute on Ageing. "That means something in the environment has occurred," he added, which "has to encourage us."

Dementia, in, on, retreat, the
You may also like: