Desperate Kurds return to Syria rather than endure conditions at camp

Erbil, Iraq: Hundreds of Syrian Kurds have returned home from Iraqi refugee camps over recent weeks despite fears for their safety, amid complaints that thousands have been "imprisoned" with little access to food, healthcare and work.

Over the past month, around 100 people have been voluntarily returning each week from camps in Iraq, after first fleeing northern Syria at the start of a Turkish offensive in October that was designed to force out Kurdish fighters.

With winter setting in and resources dwindling, those numbers are likely to grow. 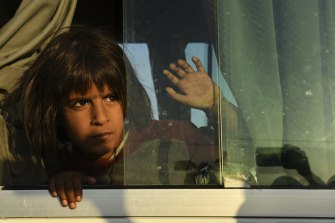 A young Syrian girl peers out the window of one of the buses bringing people to the Bardarash camp in October.Credit:Kate Geraghty

Despite an official ceasefire, violence has continued in the north-west, and a Kurdish withdrawal has allowed the government forces of the Bashar al-Assad regime to return to some areas where the Kurds ran an autonomous region before the Turkish invasion, backed by their US allies.

Human Rights Watch has also accused Turkish-backed forces of civil rights abuses against the local population in the so-called "safe zone" declared across Syria's northern border by the Turkish government.

Some 17,000 Kurds sought refuge in Iraqi Kurdistan in the early days of the operation. 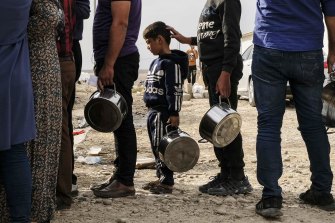 Syrian refugees wait to receive water, bread and lentil soup as more than 200 arrive at the Bardarash refugee camp in Iraq.Credit:Getty Images

Bardarash camp, which is home to 9500 newly displaced Syrian Kurds, is under strict security protocols. People are only allowed to step foot outside the camp if they have a relative already living in the region who will sponsor them and are not allowed to return once they have left.

Unable to leave the camp to work, food is scarce and many have turned to selling their blankets and mattresses.

Amid growing despair, a young man set himself on fire a few weeks ago, later dying of his burns. A second man is said to have tried the same thing last week – he was already doused in kerosene when he was saved by intervention from others in the camp.

Those without any family living locally are left with two unfavourable choices. They can stay inside the relatively small camp or return to uncertainty in Syria. 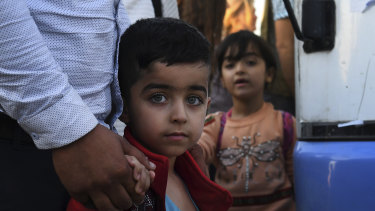 A Syrian boy holds his father’s hand as he arrives at the Bardarash refugee camp.Credit:Kate Geraghty

"I'd rather die with dignity on my own land than die of hunger," one man said on the bus to take him back to Syria.

He was one of the few daring to try to get back to his home in Darbasiyah on the Turkish border. For 52-year-old diabetic Mayasa, the lack of anything more than very basic healthcare is forcing her to go back to Syria. 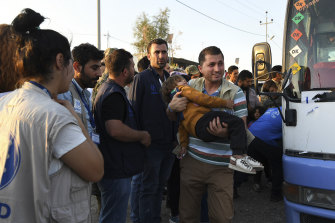 An aid worker at the Bardarash refugee camp carries a Syrian boy who fled with his family into Iraq.Credit:Kate Geraghty

"The regime is everywhere in Kurdish areas now," he said, referring to a Russian-brokered deal that saw the Syrian Democratic Forces allow Assad regime troops into its territory – for the first time in five years – to help fight the Turkish offensive.

"For me, especially as a Kurd, there is no safety for me in Syria, but at least I might be able to work," he said.

While more than 5500 people have been given clearance to leave the camps in the Kurdistan region of Iraq, the process is slow, with many citing it as one of the main reasons why they are choosing to go back to Syria.

desperate, Kurds, Return, Syri, to
You may also like: