Did embattled Housing Secretary Robert Jenrick say that the UK has ‘had enough female Prime Ministers’?

Embattled Housing Secretary Robert Jenrick was last night at the centre of a Westminster mystery over which Government Minister made the disparaging declaration that the UK has ‘had enough female Prime Ministers’.

The story has been relayed by former Home Secretary Amber Rudd, who has told audiences of Tory activists that during last year’s Tory leadership contest, an unnamed senior Tory had urged her not to run herself.

Ms Rudd claimed that the man had said that, after Margaret Thatcher and Theresa May had made it to No 10, there was no need for the party to prioritise a woman in the race.

Tory MPs claim that Mr Jenrick, currently embroiled in a ‘cash for favours’ row over a housing development, was the MP who made the remark – which he denies. 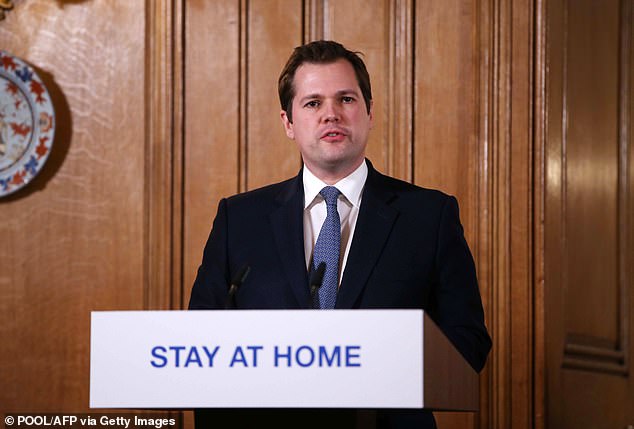 Mr Jenrick, currently embroiled in a ‘cash for favours’ row over a housing development, has denied being the minister to say that after Margaret Thatcher and Theresa May had made it to No 10, there was no need for the party to prioritise a woman in the leadership race

At the time of the alleged comment, Mr Jenrick was working as Ms Rudd’s parliamentary aide, but backing Boris Johnson for the leadership. When The Mail on Sunday asked Ms Rudd the identity of the MP, she said: ‘It seems mean to spill that one.’ When pressed further if it was Mr Jenrick, Ms Rudd declined to answer.

Mr Jenrick said: ‘I don’t believe I ever said that. It’s not something I would say and is about as far removed from my own views as is possible.

‘At the time I was Amber’s [adviser] and a hugely supportive one as well, as she would no doubt attest to.’ A spokesman for Mr Jenrick said last night: ‘The idea that Robert would say that is frankly absurd and disgusting.

‘He’s one of the strongest male advocates for women in Parliament, was Amber’s hugely supportive PPS when she was planning to run for leader and is the father of three daughters, one of whom he even gave the middle name Thatcher to encourage them to reach for the top.’ 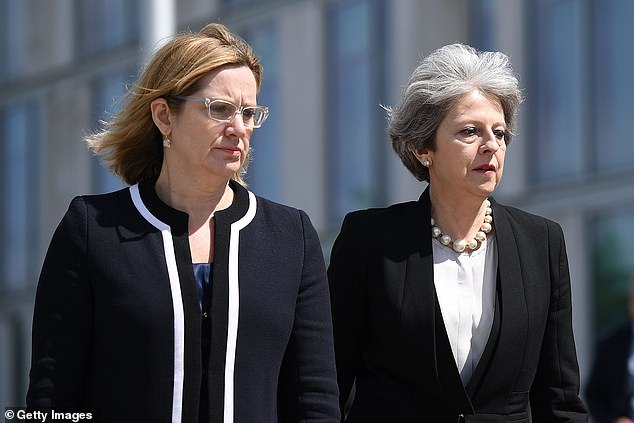 Amber Rudd, pictured left with then-Prime Minister Theresa May, has told audiences of Tory activists that during last year’s Tory leadership contest, an unnamed senior Tory had urged her not to run herself

The Minister overruled the planning inspector and his own officials to grant permission in January, two months after he sat next to Desmond at a Tory fundraising dinner.

He subsequently had to quash his own decision, admitting ‘apparent bias’ but denying any wrongdoing.

The Commons Housing Select Committee said last week that it disagreed with the Prime Minister’s claim that ‘the matter is closed’, and summoned Mr Jenrick to appear to explain ‘serious mistakes’ in his handling of the plan.

By Harry Cole and Peter Geoghegan for the Mail on Sunday

Housing Secretary Robert Jenrick has faced fresh questions over a Tory donor’s rejected planning application that was reopened by his department just weeks after he took office.

Quinn Estates, a major Tory donor, wanted to build 675 homes in Sittingbourne, Kent, but met opposition from local residents and councillors. The case was taken over by the Housing Department a month after Mr Jenrick was promoted to Housing Secretary and is still live.

After an investigation by the website Open Democracy and The Mail on Sunday, Labour last night demanded Mr Jenrick explain the latest concerns around big donors to the Tories and planning permission granted by his department. But last night, he insisted he had not taken any decisions relating to the case.

Yet he did not respond to questions over whether he had ever met the development’s boss Mark Quinn or was aware of more than £110,000 his firms had donated to the Tories in recent years. Mr Quinn’s planning application was submitted in January 2019, and was rejected by Swale Borough Council in June of that year.

A month later Mr Jenrick became the Housing Secretary and Quinn Estates also launched an appeal. Before it was concluded at a council level, the Housing Department took control of the decision-making process on August 13 of that year. That same month Quinn Estates made an £11,000 donation to the Tory coffers, with £26,500 donated in September and £14,000 soon after.

Mr Jenrick faces uproar over his decision to grant planning permission to Richard Desmond for a 1,500-flat development. Last night, Labour said: ‘Robert Jenrick has yet more questions to answer about another cash-for-favours planning decision.’

A spokesman for Mr Jenrick said he has not taken any decisions relating to the Quinn appeal. Quinn Estates did not respond to a request for comment.

Did, Jenrick, Robert, say, the, UK
You may also like:

US election: Why do Trump and Biden want to reform Section 230?