‘Dignity and respect’: Dominican factory vows to never be a sweatshop

Factory worker Aracelis Upia sings to herself as she sews a blue collar on to a T-shirt soon to be sold at a US college bookstore. Another chats with a colleague at the water cooler. Large fans circulate cool air throughout the factory while merengue music blares from a loudspeaker.

The clothing industry is globally notorious for substandard working conditions and meager wages. But Alta Gracia, a US-owned garment factory in the Dominican Republic, produces T-shirts and sweatshirts for about 600 US colleges with the “living wage” and values of “dignity and respect” at its core. And it vows never to become a sweatshop.

It hasn’t always been easy.

The factory was founded in 2010 when Knights Apparel, a leading supplier of college-logo sportswear joined forces with the Worker Rights Consortium (WRC), a labor rights not-for-profit, with the backing of socially conscious US students and Dominican unions.

Scott Nova, executive director of WRC, believes Alta Gracia is “the only apparel factory in the global south to pay a living wage”. His organization certifies this through regular monitoring.

Additional benefits go far and beyond wages. Workers can freely unionize, have access to medical insurance and get a minimum of 14 paid vacation days.

Despite the business’s cyclical nature, Alta Gracia workers are employed throughout the year, unlike many garment factories that dispense with their temporary workers for weeks or months at a time.

This is far from the grueling conditions many of the 117 workers at Alta Gracia faced when working at BJ&B, the Korean-owned company which produced baseball caps for Nike and Reebok on the same site before closing down in 2007.

When Nova helped launch the Alta Gracia factory the idea was to “test and demonstrate the proposition that you can have a garment factory that treats workers decently and pays a living wage” while also keeping prices “reasonable”.

Nestled among tropical vegetation in a valley one hour from the bustling port of Santo Domingo, the factory is located in one of the country’s 60 or so free-trade zones, in the town of Villa Altagracia, better known in the 50s and 60s as the hub of the country’s sugar and paper industries. 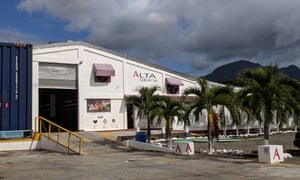 Felix Reynoso owns a local coffee shop that overlooks a steady line at the Caribe Express money transfer store across the road. “The town increasingly depends on foreign remittances from families who have moved to the US, Puerto Rico and Europe,” he says.

Those who stayed behind flock to the neighboring capital in the early hours to work as domestic servants and security guards. “There is also work at Cítricos Dominicanos,” he says, referring to the fruit juice company based in Villa Altagracia. “But the pay is very low,” he adds.

“I used to live here,” says Patricia, 33, one of Alta Gracia’s most loyal workers, as she shows me the remains of a wooden shack off a muddy trail with no kitchen or running water. “We used to wash with buckets of water,” she says.

She now shows off her gated two-bedroom home across the road and describes her plans to put tiling on the walls of her brand-new bathroom.

Patricia’s sister died unexpectedly, leaving her and her husband in charge of her three children. “I went from having one child to having four. If it weren’t for Alta Gracia, I don’t know what I would have done,” she says.

Her first pay stub from 2010 still sits in a frame on a coffee table in her living room. Worker upon worker talks of their initial skepticism before their first paycheck arrived.

“I couldn’t believe this. It was like a dream come true,” she says.

Her colleague, Valentina García, 38, was $2,500 in debt when she was hired at Alta Gracia. Her plan was to emigrate to Chile, but her smuggler was arrested before she could even start her 3,000-mile journey to South America, and the payment had already gone through.

When she got divorced she had to mortgage her home to pay off her debts and support her two children. She couldn’t make ends meet as a domestic worker in the capital, Santo Domingo, and her ex-husband’s contribution was minimal.

She had previous experience from working at another garment factory, where she had been earning about 1,000 pesos a week. Several years later, at Alta Gracia, she was earning five times as much. “There is no comparison,” she says.

But however noble the cause, Alta Gracia has yet to prove its sustainability as a business.

The new year got off to a shaky start when the withdrawal of an investor suspended factory production for five days. The temporary closure initially left workers scrambling to account for expenses made over the Christmas holiday but they were eventually paid.

Since securing an important financial commitment from Barry Davison, the founder of Yellowcreek Partners, Chris Morocco – who took over as CEO in April 2018 – is confident the company will be profitable by the end of 2019.

He assures the Guardian that the company’s growth is now guaranteed for at least “the next five years”.

“I finally feel we have the financial resources to build this brand,” he says. 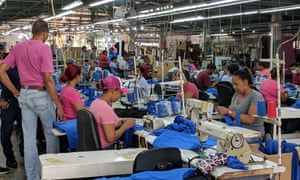 Since the takeover in 2018 by AG Triada and TripleStone Partners, Alta Gracia has signed a distribution agreement with Fanatics, a major online sportswear retailer.

The deal includes producing and marketing sports apparel for all the Major League Baseball (MLB) teams in time for the next season that kicks off in spring 2019 and for all National Football League (NFL) teams in the fall.

As Alta Gracia’s parent company, Knights Apparel had already laid the foundation for this expansion into the sports world beyond college-logo clothing by teaming up with the Dallas Cowboys, the US’s most valuable sports franchise.

Morocco plans to build on Alta Gracia’s solid relationship with more than 400 Barnes & Noble College bookstores, their main distribution platform, and to take things to the next level through online distribution.

He is confident his socially conscious millennial and – the younger i-Gen – customer base will help him meet his goal to increase revenues and gross profit margins in 2019. They appreciate not only “how the product makes them look and feels, but also what they might be doing for others”.

Barnes & Noble College has stood behind Alta Gracia since the company’s inception.

“From the beginning this was a very important project for us. Since then we have never wavered,” says Joel Friedman, vice-president of Barnes & Noble College. The company even gave Alta Gracia the job of producing their most popular T-shirt.

Why are wages so low for garment workers in Bangladesh?

But Friedman warns: “People aren’t going to buy just for the social piece. The product has to be right.”

That is why Morocco aims to produce “fashion-forward” products that will position Alta Gracia as a “premium product”, as opposed to just a regular T-shirt brand.

Eduardo Cabrera, the factory’s union leader admits he has difficulty believing that investors were willing to keep a company going for nine years without making a profit. “Nobody thought this would last more than a year,” he admits.

But recent changes have made him apprehensive. “There have been several layoffs recently and the new quality manager is unreasonably strict.”

“If the company is really not making a profit, they need to be more transparent about it,” he adds.

Both Morocco and Adriana Báez, the plant manager in Villa Altagracia, vow there will be no further downsizing and that the strategy for 2019 should do the rest.

“It is part of our culture. Our people are our most valuable asset,” says the new CEO.