Disabled man petrified after vigilantes mistake him for paedophile

A disabled man dubbed the ‘Forrest Gump’ of his community was left fearing for his life when vigilantes mistook him for a convicted sex offender.

Bryon Rodger, of Middleton, Greater Manchester, was forced to delete his Facebook account after he was bombarded with threats.

Mr Rodger, 33, who was left severely brain damaged after being hit by a drink driver when he was younger, was devastated because he uses social media as a lifeline to keep in touch with family and friends.

Innocent Bryon, whose sister Gail says is affectionately known as ‘the Forrest Gump of Middleton’ because he walks miles every day, was subjected to vile online threats after being mistaken for convicted sex offender Patrick Kelly, 38. 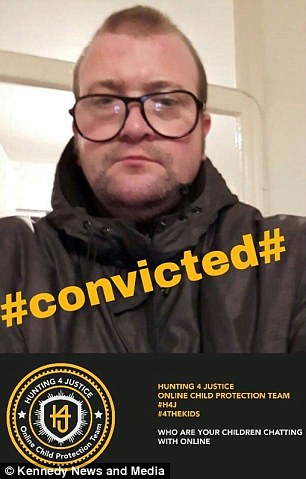 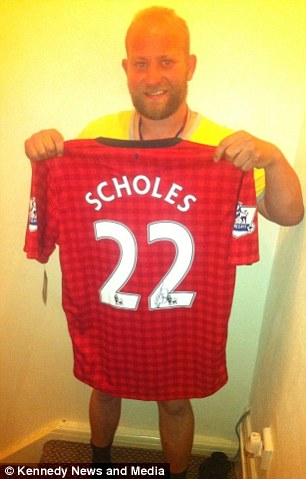 Like Bryon, Kelly is also from Middleton, Greater Manchester, and sports similar facial features to Bryon including the same stubble and glasses.

Kelly was convicted of attempting to meet a child following sexual grooming after an online sting by the Hunting 4 Justice group who had posed as the 14-year-old girl. 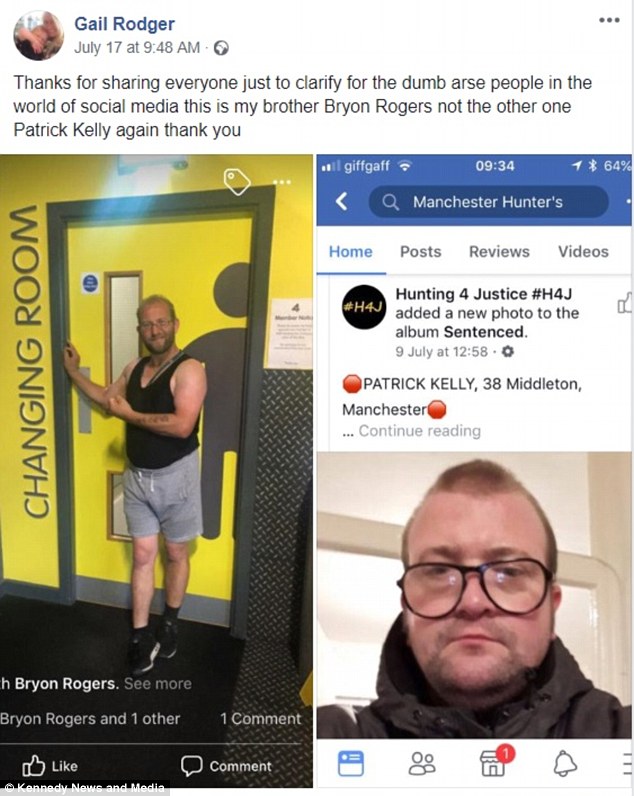 ‘We found out that on a hunting for justice group, a Patrick Kelly in Middleton, had been exposed as a sex offender.

‘But because he’s in Middleton and he’s wearing glasses they thought he looked like Bryon.

‘All of a sudden they were inboxing him and saying ‘you’re Patrick this and that, we’re going to come to your address and hunt you’ and all that. He was absolutely petrified.

‘Bryon’s on Facebook a lot – he’ll just talk to anyone, he’s such a lovely soul – and I think they’ve got him confused with him. 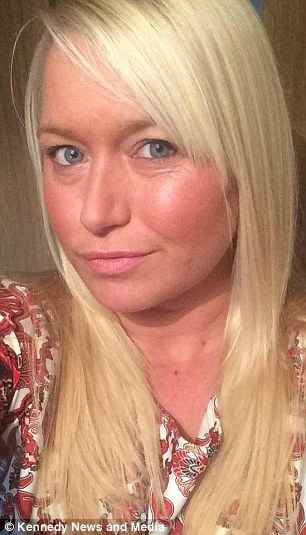 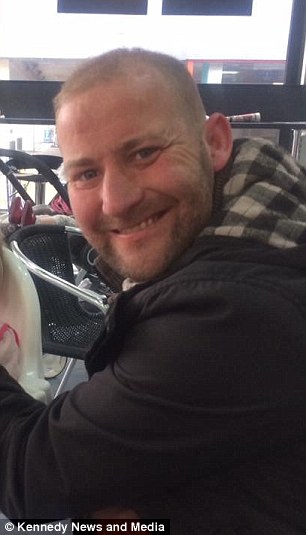 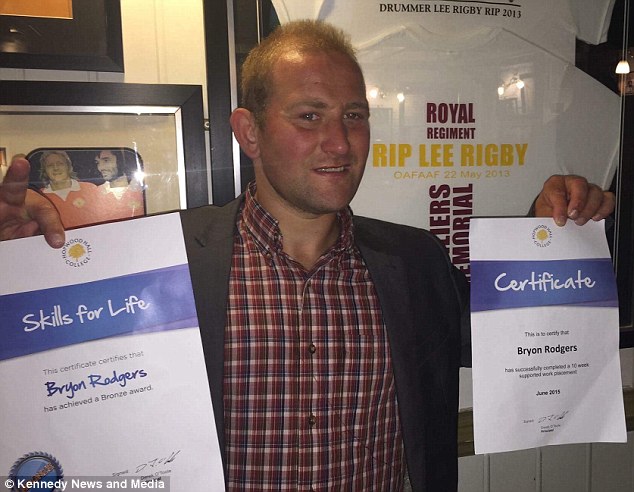 ‘It was disgusting. Bryon has been really upset.

‘He was just panicking, saying, ‘I’m going to get in trouble. People are going to get me’. He was really frightened.’

‘Bryon is really well known in the community. Everyone loves him, he’s such a lovely boy, and to scare him like that – it’s not fair.

‘We’ve had to close his Facebook down and that’s how he keeps in contact with family in Scotland.

‘He had so many pictures and memories on Facebook.

‘He’s such a crazy Manchester United football supporter it’s unreal – he had pictures with Alex Ferguson and everything and he’s lost all those pictures.

‘He was devastated to give up his account. He was asking ‘Why? Why? Why do I have to do this, Gail?’

‘I was saying ‘we have to Bryon, people are threatening you’ and it’s not fair.

‘Why should he have had to do that? He shouldn’t have had to have it taken away from him. He didn’t deserve that.

‘It was because of internet bullies. Idiots sat at the end of a keyboard picking at people.’

Mr Rodger was left severely brain damaged after being run over by a drunk driver the day after his sixth birthday. 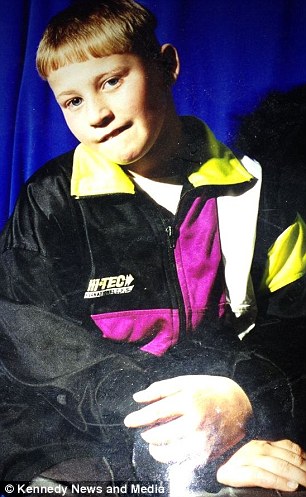 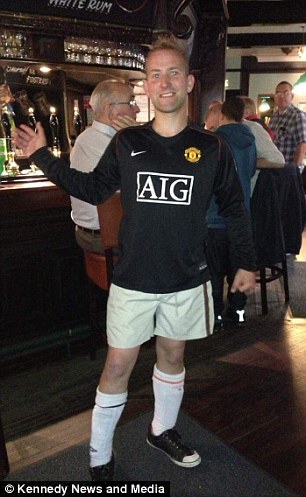 Mr Rodger (pictured as a teenager, left, and right) was left severely brain damaged after being run over by a drunk driver the day after his sixth birthday

The family were told he might never walk or talk again, and Bryon had to learn to do everything for himself with the mental capacity of a baby.

Now he walks miles everyday and is looked after by the whole community, with many neighbours and friends having cups of tea ready for him when he drops in for his daily chats.

Gail said: ‘I call him the Forrest Gump of Middleton. Everyone knows him, even the bus drivers.

‘He walks absolutely miles every day all over because he can’t stay still.

‘From being told he can’t walk to walking everywhere, it’s amazing. He’s like a harmless child in a man’s body.

‘Thankfully we’ve cleared his name now and everyone knows it’s not him.

‘I’ve had the whole community messaging me saying ‘we’ve seen Bryon today, and asked him if he’s okay. We’re looking out for him’.

‘I’m all for what the Hunting 4 Justice groups and things do, I think they’re great.

‘I’m all for that kind of activity and I know it’s not their fault. They put a statement out saying ‘it’s not Bryon Rodger, people need to leave him alone’.’

Ms Rodger alerted the Hunting 4 Justice group to the abuse her brother was receiving because of Patrick Kelly’s image on their page.

Hunting 4 Justice then shared a status which said: ‘WE DID NOT STING OR ACUSE [sic] BRYON RODGERS OF BEING A PAEDOPHILE.

‘WE STUNG PATRICK KELLY AND PEOPLE ARE ACCUSING BRYON.

‘BRYON IS INNOCENT AND THIS NEEDS TO STOP!

‘PATRICK KELLY AND BRYON DONT LOOK ANYTHING LIKE EACH OTHER! LEAVE BRYON AND HIS FAMILY ALONE!!!!’

A spokesperson for Hunting 4 Justice said: ‘I would like to state that we are sorry that people are mistaking Bryon for being Patrick.

‘Patrick and Bryon look nothing alike and we will do all we can to keep reassuring people that Bryon is not Patrick Kelly.’

The Crown Prosecution Service confirmed the charges relate to what he thought was a 14-year-old child.

Kelly walked free from court but was handed a 36-month Community Rehabilitation Order, told to complete a Sex Offenders Treatment Programme and given a five-year Sexual Harm Prevention Order.

He was also ordered to sign the Sex Offenders Register for five years.