A lawyer for Aboriginal people fighting to protect trees they see as culturally significant along the Western Highway says the Victorian government had ample evidence of the area's heritage when it continued controversial construction works to duplicate the road. 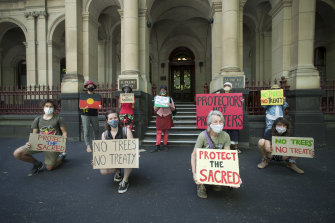 Activists outside the Supreme Court on Thursday protested in solidarity with the Djab Wurrung in their bid to stop the further felling oftrees.Credit:Paul Jeffers

Major Roads Project Victoria – the state agency building the 12-kilometre highway duplication between Buangor and Ararat – was ordered to halt works on the project for three weeks on October 29, following a public outcry over the removal of a large yellow box tree, widely referred to as the "Directions Tree".

The case before the court this week will decide whether the injunction should be extended until a further case examines whether permanent protection should be granted. Justice Jacinta Forbes will make her decision on Friday.

Mr Merkel argued the area surrounding culturally significant trees along the project’s route was of equal importance to the Djab Wurrung people and damaging this area would contravene the Victorian Aboriginal Heritage Act 2006.

Five large trees identified in the hearings are being avoided by the works following a previous successful application by traditional owners to the federal Environment Minister. (This does not include the 'Directions Tree', which was felled.)

But Mr Merkel said there were legal grounds for the landscape surrounding these trees to be deemed as equally significant and should be saved, while a sixth tree the traditional owners had unsuccessfully applied for protection should also be spared.

"We are concerned here with spiritual and metaphysical relationships between people and their land," Mr Merkel said. "When you go to the evidence, there is no dispute amongst any experts … the specified area is an area of cultural significance to the Aboriginal people.

"Colonisation has had dramatic effects in 200 years of destroying much of that association for many Aboriginal people including their own identification as a people.

"What the Act [Victorian Aboriginal Heritage Act 2006] is designed to do … is bring that dispossession of that period of colonisation to an end."

Mr Merkel argued the government was "on notice" about evidence proving the cultural heritage of the trees and the surrounding area, but continued on with the works anyway.

This is despite the government having "no warrant" to harm Aboriginal cultural heritage under Victoria’s laws, regardless of any possible implications this might have on costs.

Mr Merkel also told the court that a confidential letter between Eastern Maar Aboriginal Corporation (EMAC) and MRPV showed the Aboriginal corporation was paid $120,000 annually for a cultural heritage officer while a minimum of 1 per cent of procurement spend on all future MRPV projects was agreed to be directed to Aboriginal businesses.

In return, Eastern Maar would provide "reasonable assistance to MRPV with a view to enable MRPV to resume works" and would publicly acknowledge that their concerns about the road had been addressed by MRPV.

Mr Merkel said this posed a "conflict of interest" for Eastern Maar and the organisation's support for the project should not be relied upon as reason to deny extended protection.

Richard Atwill, QC, acting for the state, argued that it was not reasonable to stop a major infrastructure project at such a late stage, for which "substantial public money" had already been spent.

He said a 2013 Aboriginal cultural heritage plan had been agreed to and relied on over the past seven years.

"There's been a comprehensive planning process that has been engaged for approximately a decade, people's land has been acquired and substantial works have been done,” Mr Atwill said.

Mr Atwill said Ms Thorpe had agreed to interim works commencing on a 3.85-kilometre section of the road in October 2019 in exchange for protection of a specific area. He said the move undermined the arguments put forward by Mr Merkel. "The works are substantial, she allowed them.”

A spokeswoman for EMAC denied that the organisation has accepted any improper funds.

"The suggestion of an employment position being established by Eastern Maar through agreement or arrangement with MRPV is factually incorrect. No money has been exchanged for these purposes," she said.

Traditional owners have also brought a separate case on the project that will be heard in the Federal Court in December, in which they are appealing the federal environment minister's third approval of the project.

Case, Djab, hears, Legal, Wurrung
You may also like: