The most chilled dog ever? Malamute lets his owner bury him in snow until only his eyes and snout poke out

This is the hilarious moment a dog cools off by letting his owners bury him in the snow.

Phil the Alaskan Malamute, who lives with Emma-Leigh and Shane Matthews, from Cumbria, was out enjoying the recent snowfall over the weekend.

And after a morning spent jumping about in the white powder, was only too happy to let his owners give him a quick cool-off.

Phil the Alaskan Malamute lives with his owners Emma-Leigh and Shane Matthews in Cumbria, North West England. They were out on Sunday enjoying the recent snowfall 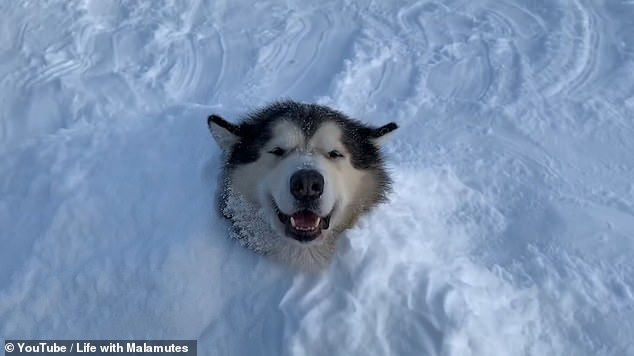 The pooch appears happy with most of his body submerged beneath the snow, with a thick double coat to keep himself warm 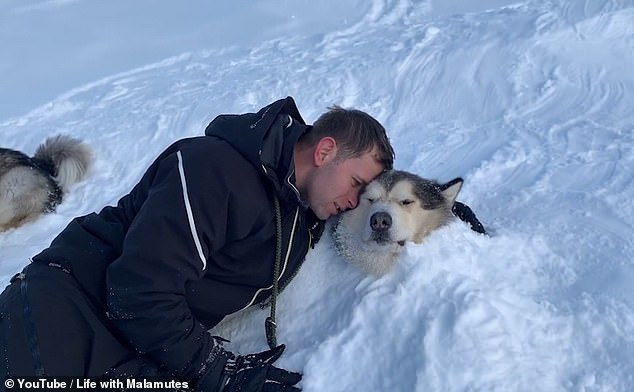 The dog sits patiently as his amused owners pile up snow around him, in video posted to their YouTube channel Life with Malamutes.

Describing Phil’s love of snow, the pair wrote on their channel: ‘Phil loves snow so much. He’s so hyper in it. So today we covered him in it.’

The pooch is well-suited to the cold, being similar to other arctic breeds including the Siberian Husky, and has a double coat to keep himself warm.

They are still used as sled dogs in some parts of the world, but are now predominately kept as pets.

This latest snowfall would have been real treat for Phil – who can enjoy his natural environment, if only for a short while. 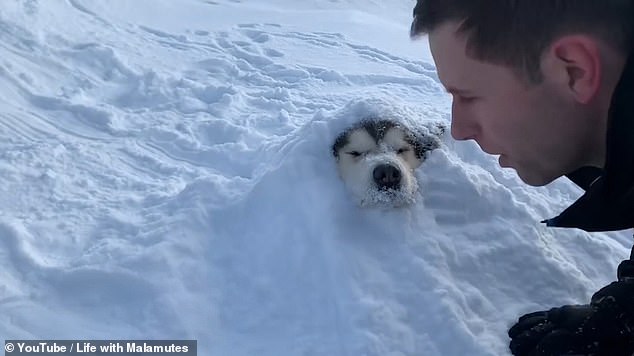 Not content with just the body covered up, Shane continues to pile snow on Phil until only his eyes and snout poke out 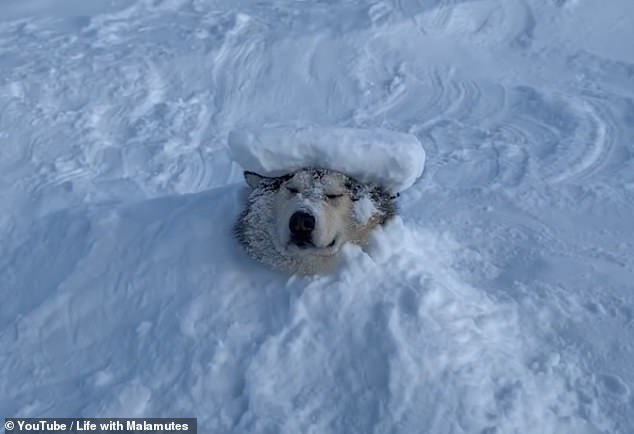 Phil is eventually given a hat, which completes the snow picture. Cumbria saw heavy snowfall late last week, and much of it still remained over the weekend

Video shows snow piled all the way up to Phil’s eyes and snout, as he sits quietly in the cooling powder.

Before Emma and Shane, who can be heard laughing in the background, give him a snowy hat to complete the picture.

But Phil isn’t stuck too deep in the snow, as his friend Niko – also an Alaskan Malamute, distinguished by its woolly coat – runs over and frees him.

Phil bursts out of the snow and plays around with Niko – both of whom live at home with a cat called Milo. 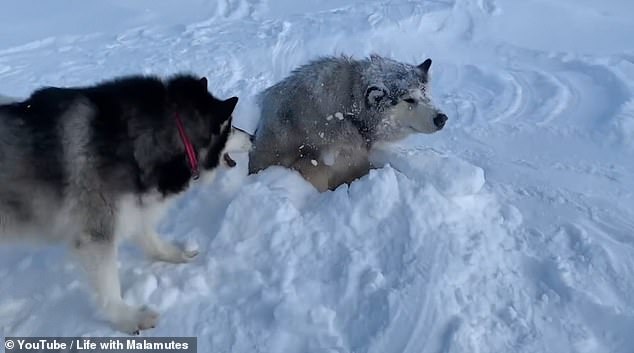 In the end another of the couple’s dogs, Niko, runs over to spur Phil out of his snowy hole. And the two spend time playing with each other in the white powder 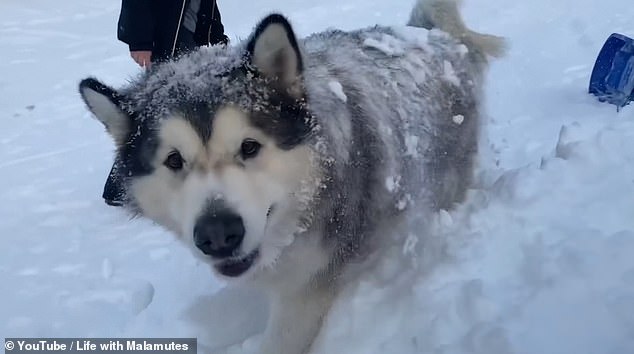 Phil’s coat is covered in snow following the recent burial, but he quickly loosens it after a few shakes of his body

Thousands have now viewed the adorable footage, with many commenting on the cuteness of the scene.

Writing on YouTube, Darrell Johnson said: ‘That’s absolutely hilarious. I can’t believe any dog would sit still enough to be buried in snow.’

While another said: ‘Phil is even more chill than snow. He is like “you can’t touch this.”’

And another said: ‘Phil enjoying it so much. He’s just so cute.’

The dog’s owners also have an Instagram account which has attracted more than 375,000 followers – sharing pics of Phil’s antics.

Phil is so close to the pair, that he even served as best man to their wedding in July 2017.

bury, dog, eyes, lets, owner, Snow
You may also like: