A DOG was stabbed three times and had his neck slashed while another was beaten so badly she couldn’t walk on her front legs.

The two pets were targeted at the same stables in “sickening” attacks which left them fighting for their lives. 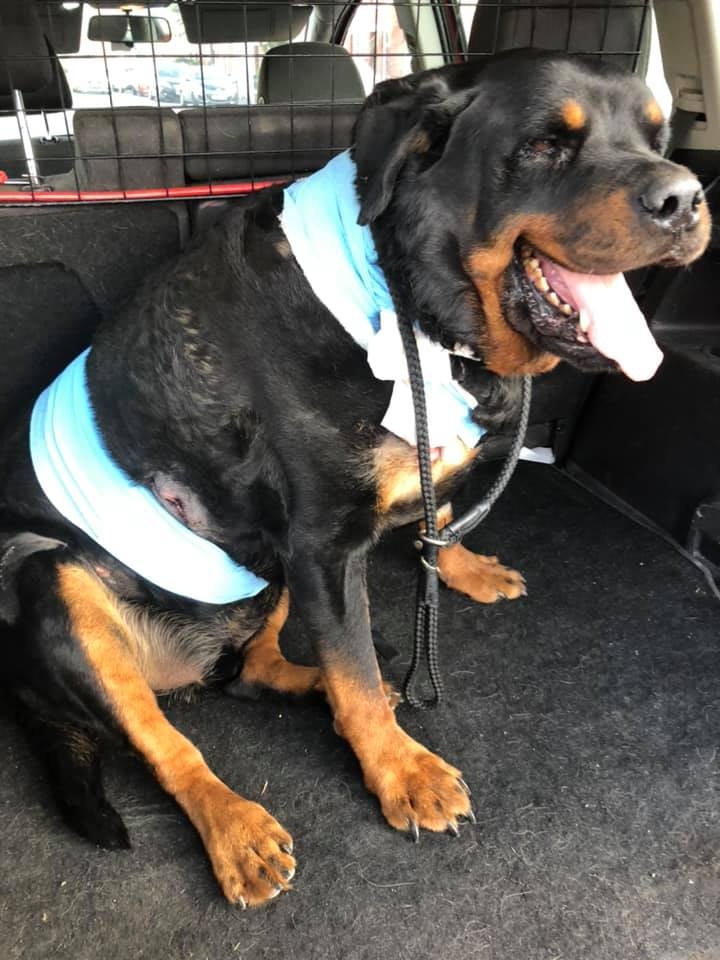 Police are now investigating the stabbing but no arrests have been made.

Owner Anji Sanderson told LancsLive she found Rottweiler Rocky wandering about the yard with stab wounds in his chest, thigh and side – and a four-inch cut along his throat.

Seven-year-old Rocky, who Anji called a gentle giant, was rushed to the vets and had to have parts of his jaw removed because of the brutal stabbing.

Anji Sanderson, 56, told LancsLive: "This was attempted murder, someone has tried to kill my dog.

"I know that Rocky was asleep in his bed when this happened, to go into a dog's bed, stab them multiple times and slit their throat, it's just horrific.

"The vet has confirmed that it was attempted murder, if that cut was any deeper Rocky would be a dead dog, that is what is so upsetting.

"They have targeted him, nothing else on the yard was touched or stolen. It is a worry that I will be attacked, I have a lot of health problems and I feel that makes me an easy target."

Anji keeps her dogs on a yard in Poulton-le-Fylde, Lancashire where they are free to roam.

She arrived there early on September 17 to find the heavy duty padlock and chain on the gate were missing.

Anji and her daughter said they went into the yard to find Rocky badly injured and their other Rottweiler, Tia, limping because of the attack.

'WE DIDN'T KNOW IF HE WOULD SURVIVE'

Tia was beaten so badly she could not walk on one of her front legs and her hips kept giving way.

Rocky has had to have two surgeries because of his stab wounds and might have to have a third if they open up again.

Anji told LancsLive: "We didn't know for a time if he was going to survive. Rocky is such a gentle dog, he wouldn't have even retaliated when he was attacked.

"We had a children's party here last year and he was allowed out amongst all the kids, that's how gentle he is, you could ride him and he wouldn't complain.

"He's so trusting, even now at the vets he's still friendly and they didn't even have to muzzle him when they inspected his wounds."

A fundraiser has been set up to cover the costs of Rocky's vet bill.

Nicola Baxter, who set up the GoFundMe page, said: "The vets saved Rocky's life and Anji is extremely grateful [for] what they have done to help save Rocky and also caring for Tia.

"Tia was kicked quite hard and poor Rocky was stabbed, had several stab wounds and sadly has had to have surgery and part of his jaw removed.

"He is now back home and slowly recovering and Tia seems to be a little better but they both have a way to go before they make a full recovery."

Lancashire Police said: “We are appealing for witnesses after a dog was stabbed multiple times at stables in Hambleton.

“A second dog also suffered leg and hip injuries in the incident which happened at stables on Shard Road between 8pm on September 16th and 10am on Sep 17.”

And, dog, stabbed, th, three, Times
You may also like: