Kavanaugh, accused of a sex attack against a fellow student in 1982, said the attempted rape accusation he's facing is "grotesque" and politically-motivated "character assassination". 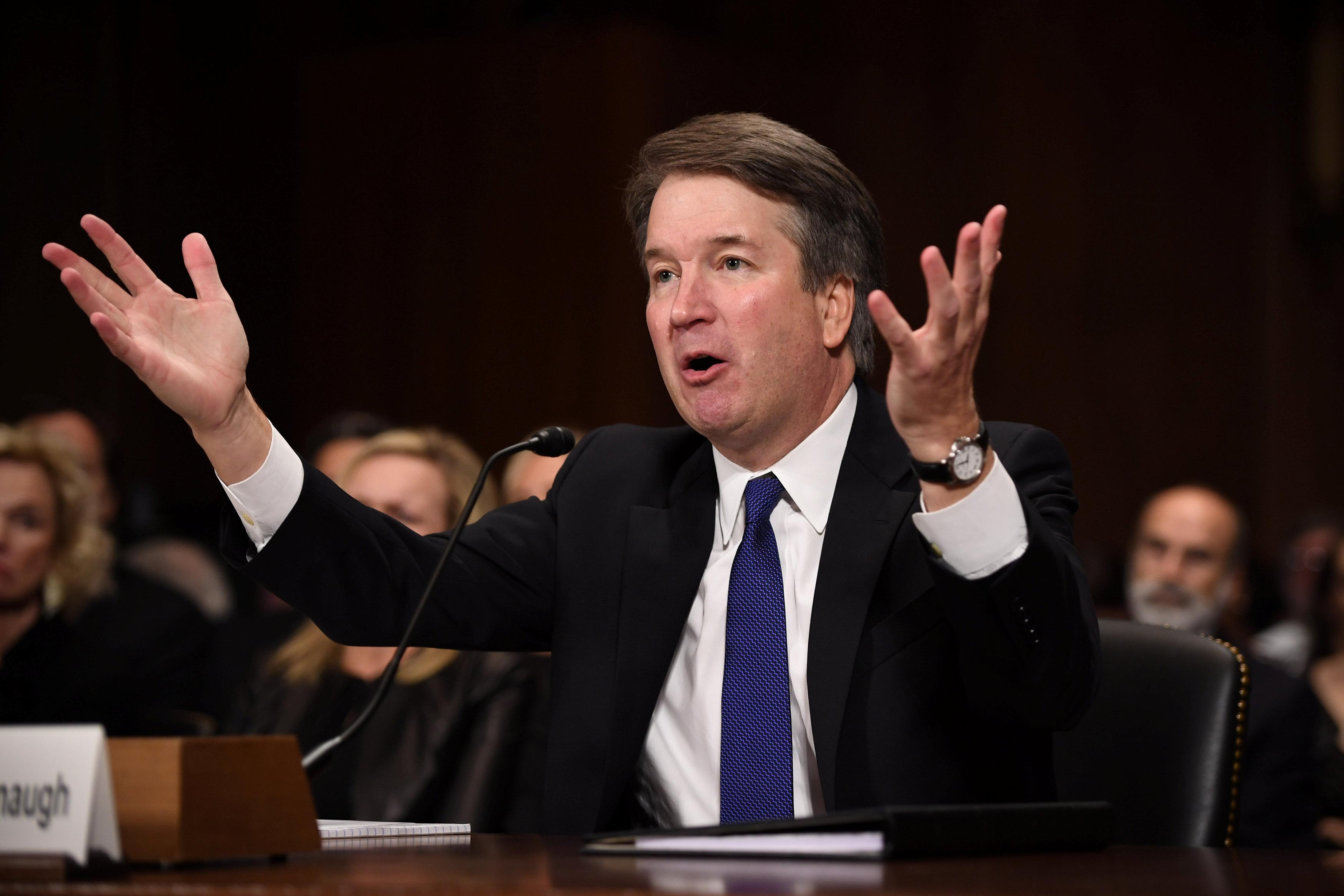 Testifying to the Judiciary Committee, Kavanaugh denied allegations he preyed on Professor Christine Blasey Ford at a high school party and labelled them a "joke".

His testimony came hours after Dr Ford said she feared Kavanaugh might accidentally kill her.

She sobbed as she told how the potential Supreme Court justice pinned her down and covered her mouth with his hand to muffle her screams during the alleged attempted rape.

White House spokesperson Raj Shah told TIME: "I thought it was nothing short of spectacular – powerful".

What we know so far? 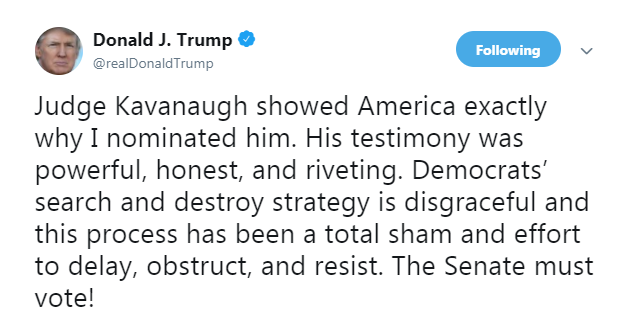 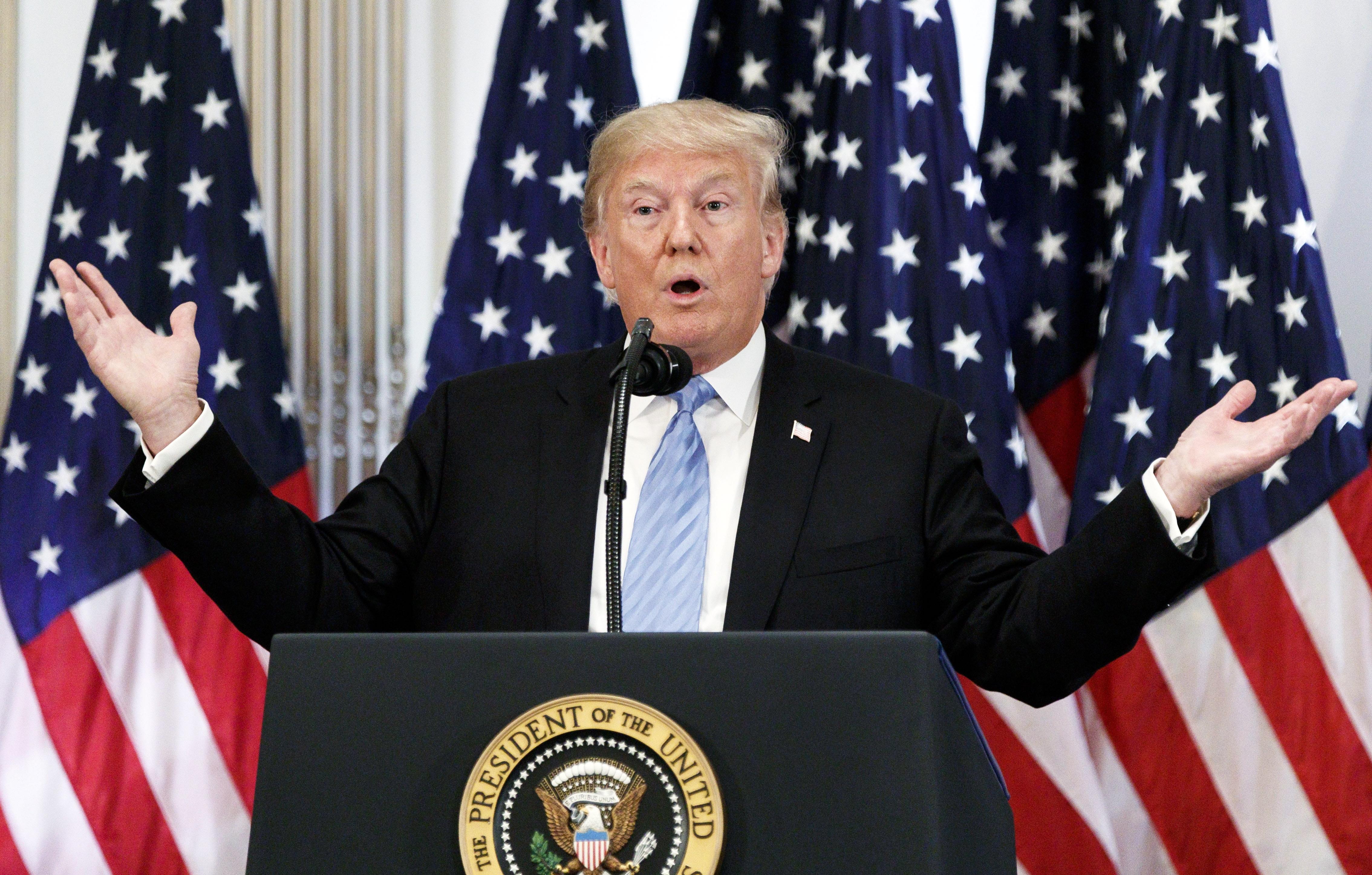 He added: "I think he developed a very compelling narrative for why this stuff isn’t true. You don’t have to hate the accuser or impugn her credibility to vote for him.

"He developed a standard for judging this that everyone would want applied to them."

It followed Trump's own tweet, posted moments after Kavanaugh finished testifying, that read: "Judge Kavanaugh showed America exactly why I nominated him.

"His testimony was powerful, honest, and riveting. Democrats’ search and destroy strategy is disgraceful. This process has been a total sham and effort to delay, obstruct, and resist. The Senate must vote!"

Kavanaugh angrily and tearfully claimed he was the victim of a "political hit" after Dr Ford said she was "100 percent certain" he attacked her.

He testified after Dr Ford finished giving evidence and they were never in the hearing room together. 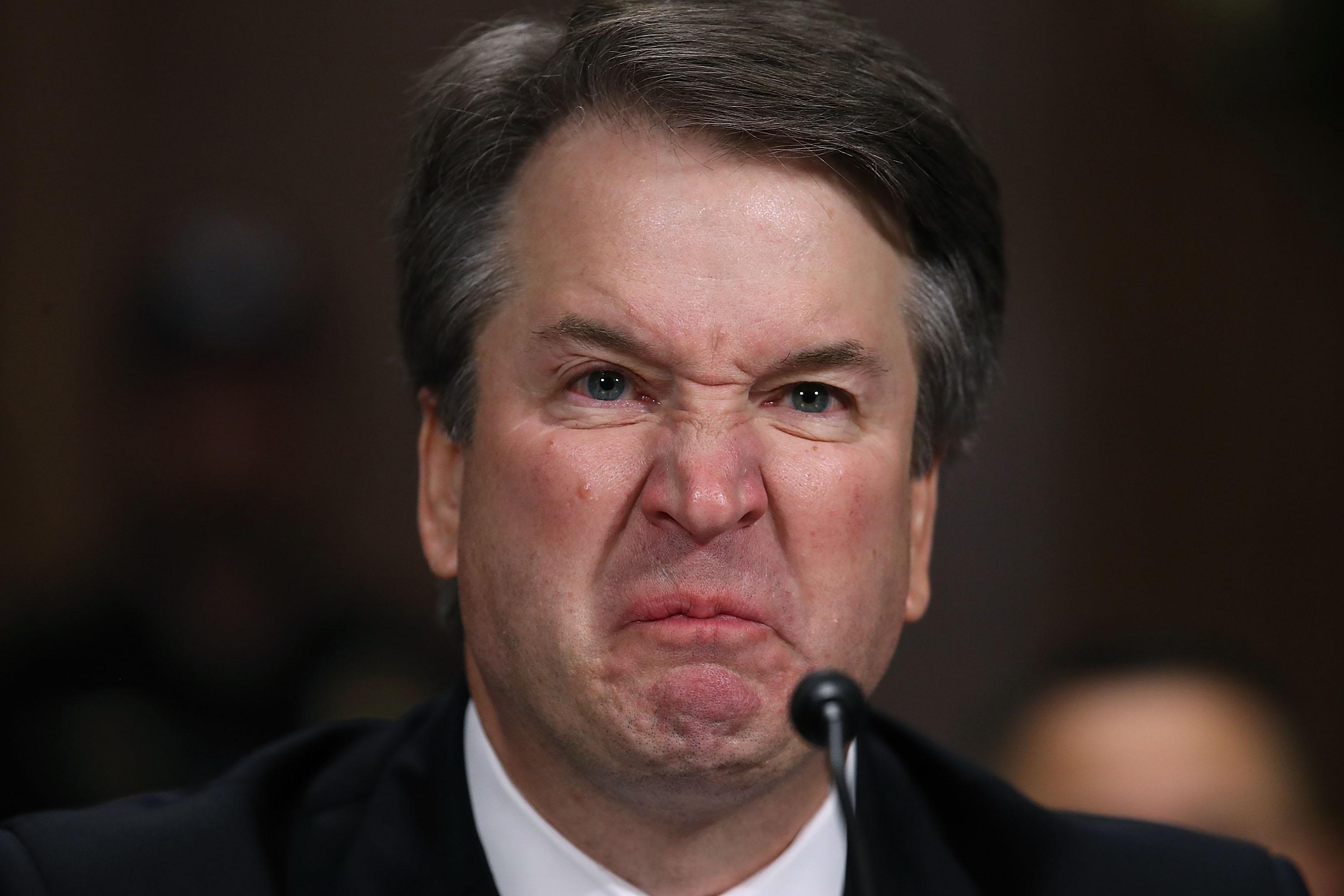 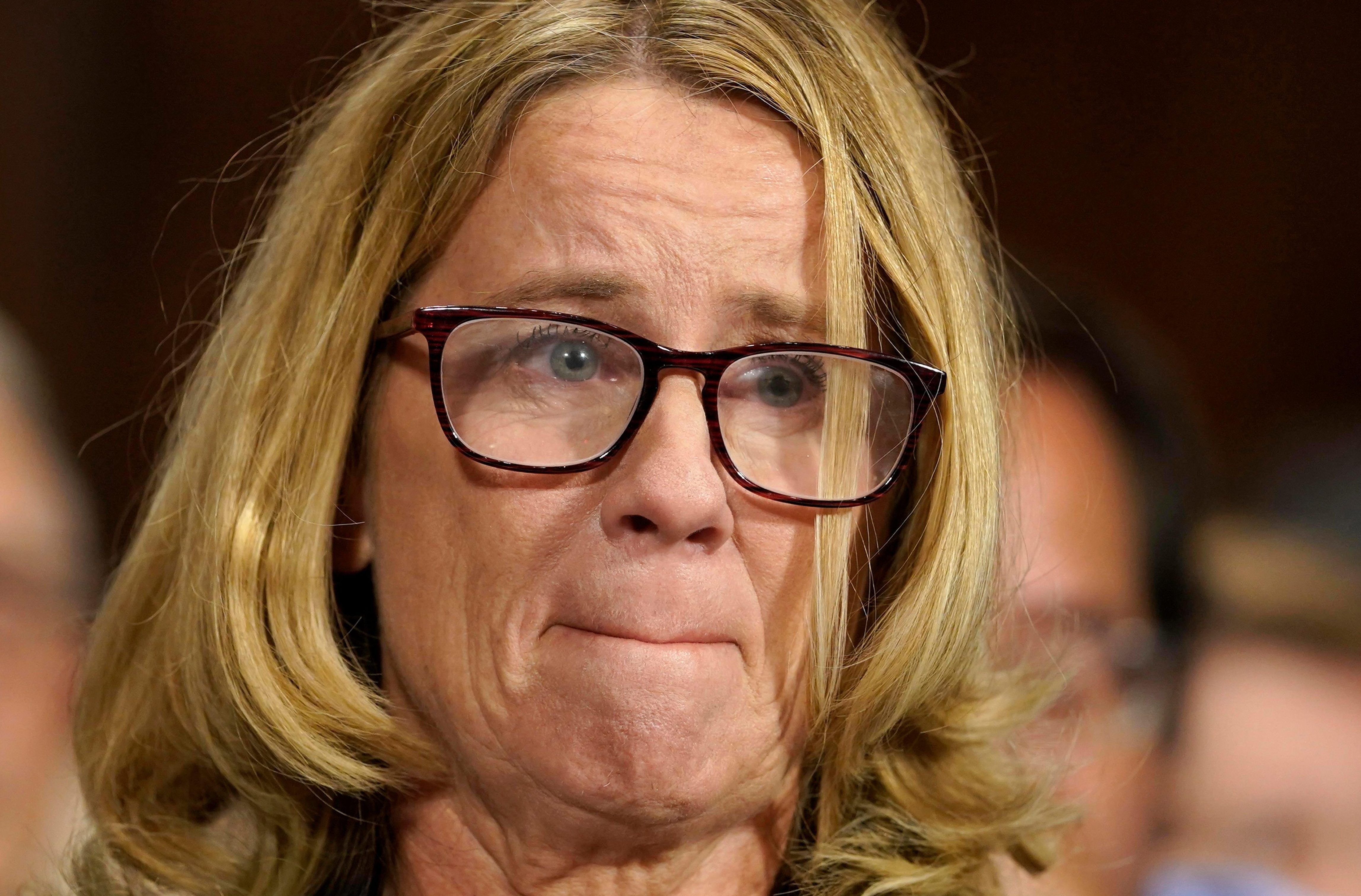 And Donald Trump Jr also weighed in, posting on Twitter: "Love Kavanaugh’s tone. It’s nice to see a conservative man fight for his honor and his family against a 35 year old claim with ZERO evidence and lots of holes that amounts to nothing more than a political hit job by the Dems."

Kavanaugh branded himself a victim of "grotesque and obvious character assassination".

He then "unequivocally and categorically" denied Ford's allegation, adding: "I will not be intimidated into withdrawing from this process."

Members of the Senate, controlled 51-49 by Trump's fellow Republicans, must now decide whether to vote to confirm him. 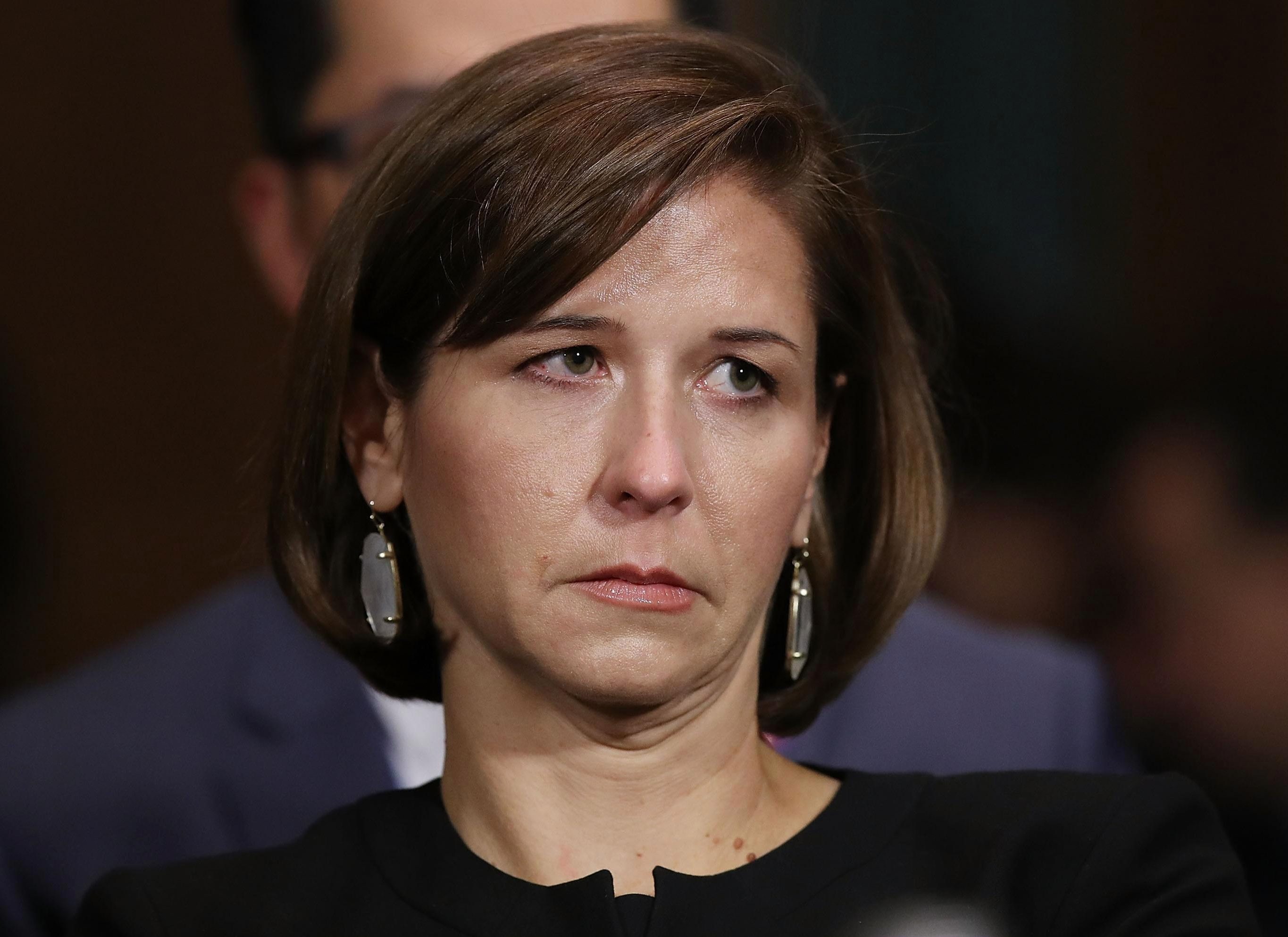 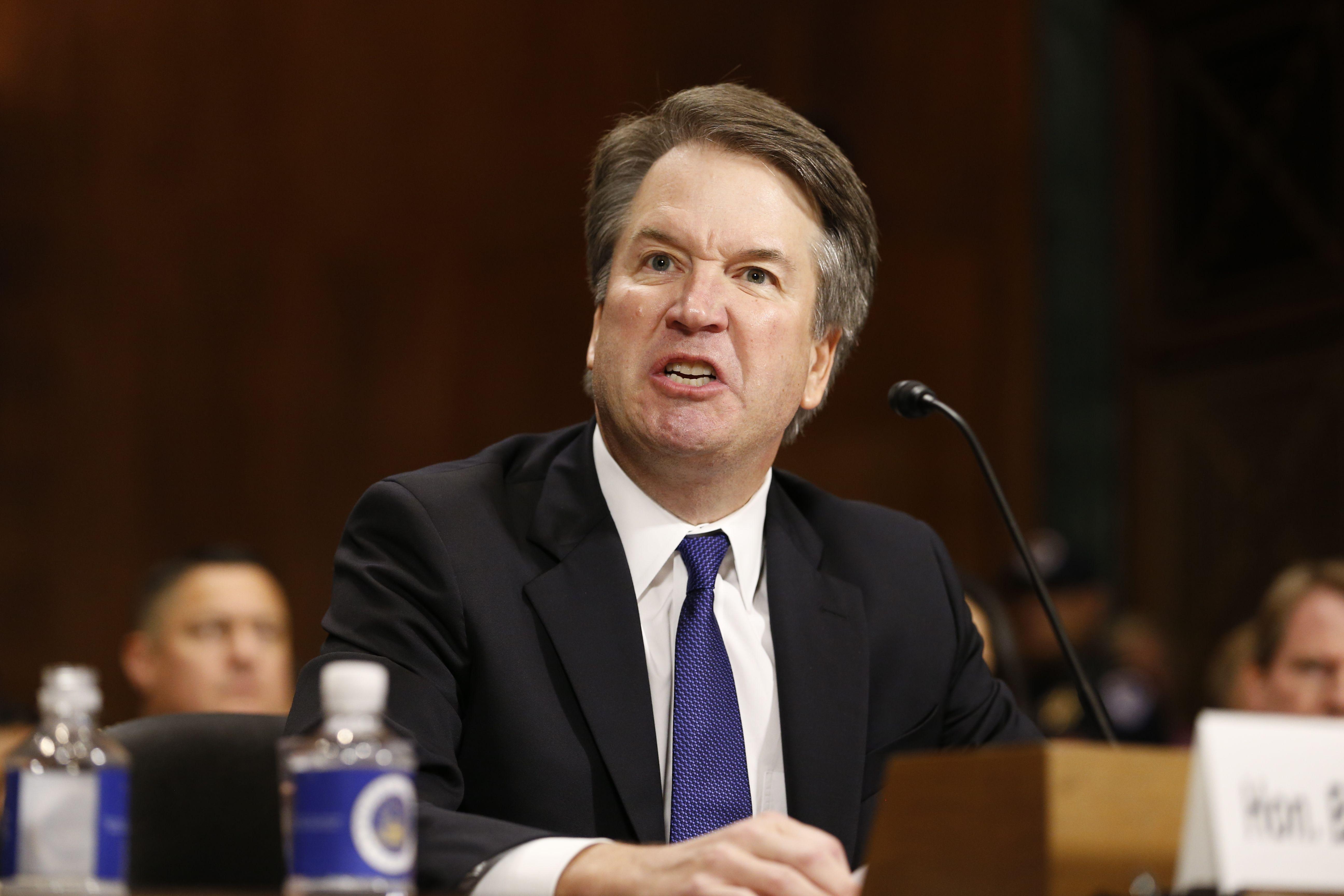 She went on to say he tried to remove her clothing at a gathering of teenagers when he was 17 years old and she was 15 in 1982.

The hearing took place against the backdrop of the #MeToo movement against sexual harassment and assault.

"With what degree of certainty do you believe Brett Kavanaugh assaulted you?" Democratic Senator Richard Durbin asked Ford.

"One hundred percent," she replied, remaining firm and unruffled through hours of testimony.

Two other women, Deborah Ramirez and Julie Swetnick, have accused Kavanaugh of sexual misconduct in the 1980s.

Ramirez accused Kavanaugh of exposing himself during a drunken dormitory party during the 1983-84 academic year when both attended Yale University.

Swetnick said she witnessed efforts by Kavanaugh and others to get girls drunk at parties so they could be raped. She said Kavanaugh was present at a 1982 party where she was raped.

b, Donald, doubles, down, on, Trump
You may also like: