‘Abandon terror and Make Iran Great Again!’ Donald Trump trades barbs with Ayatollah Khamenei after Iran’s supreme leader accused him of plotting to ‘stab the Iranian people in the heart with venomous daggers’

President Donald Trump has engaged in a Twitter feud with the Ayatollah of Iran, blasting the country’s ‘supreme leader’ in both English and Persian.

‘The noble people of Iran—who love America—deserve a government that’s more interested in helping them achieve their dreams than killing them for demanding respect,’ Trump tweeted on Friday after arriving at Mar-a-Lago.

‘Instead of leading Iran toward ruin, its leaders should abandon terror and Make Iran Great Again!’ he continued in a pair of tweets written in English and Persian.

Trump’s remarks were in direct response to a tweet in English from Ayatollah Seyed Ali Khamenei, which blasted the ‘villainous’ U.S. government. 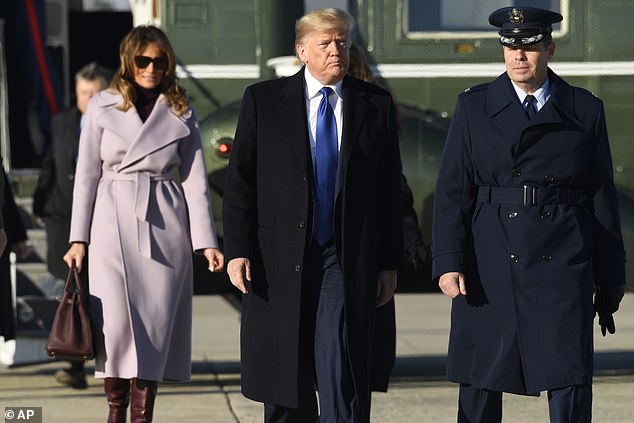 President Donald Trump has engaged in a Twitter feud with the Ayatollah of Iran, blasting the country’s ‘supreme leader’ in both English and Persian 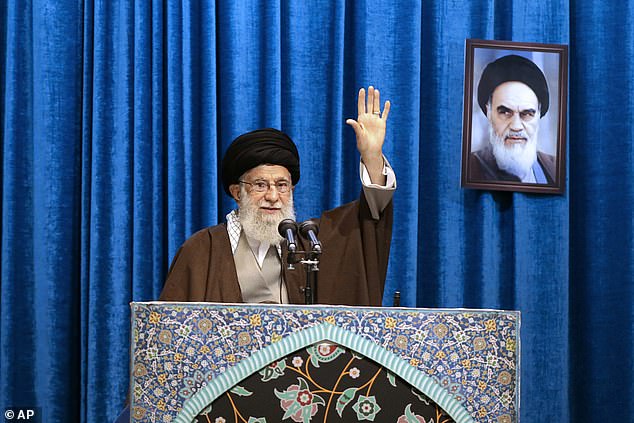 Ayatollah Khamenei, facing intense protests from Iranian people after his military shot down a civilian airliner, led Friday prayers in Tehran on Friday for the first time in eight years 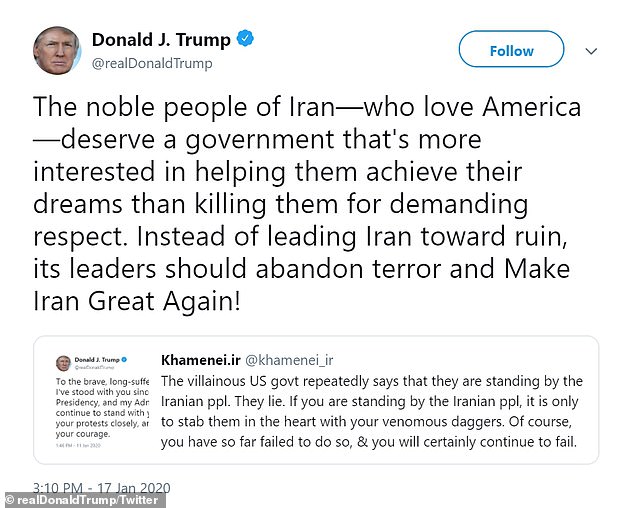 The online war of words comes a week after Iran launched ballistic missiles at U.S. forces in Iraq, resulting in no U.S. deaths, in response to the U.S. drone strike that killed Iranian General Qassem Soleimani.

Iran’s air defenses caused a catastrophe on their own soil during the ballistic missile strike, when a surface-to-air missile battery shot down a civilian passenger airliner mostly full of Iranian citizens.

Khamenei has faced intense backlash and protests from Iranians furious at their government for initially claiming that an engine malfunction had brought down the jet.

After Trump tweeted in Persian and English supporting the protesters, Khamenei launched a tweetstorm of his own, furiously blasting the American president.

‘The villainous US govt repeatedly says that they are standing by the Iranian ppl. They lie,’ wrote Khamenei.

‘If you are standing by the Iranian ppl, it is only to stab them in the heart with your venomous daggers. Of course, you have so far failed to do so, & you will certainly continue to fail,’ he said.

‘The threat of the French & German govts & the vicious British govt to send Iran’s case to the Security Council proved once again that they are the footmen of the US,’ he wrote.

Trump responded: ‘The so-called ‘Supreme Leader’ of Iran, who has not been so Supreme lately, had some nasty things to say about the United States and Europe. Their economy is crashing, and their people are suffering. He should be very careful with his words!’ 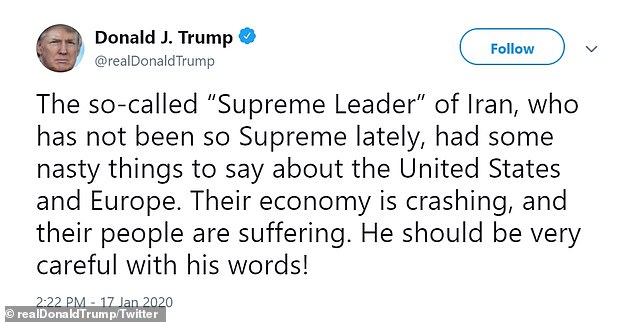 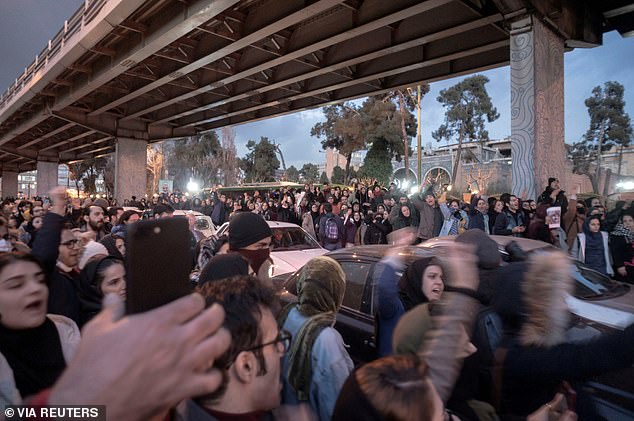 Mass protests erupted in Tehran after Iran admitted it had shot down a passenger jet’ Trump encouraged the protests in a series of tweets, infuriating the Ayatollah

On Friday, Khamenei threw his support behind Iran’s elite Revolutionary Guards in a rare sermon, after their belated admission that they had accidentally downed an airliner triggered days of street protests.

In his first Friday prayers sermon for eight years, Khamenei also told worshippers chanting ‘Death to America’ that the elite Guards could take their fight beyond Iran’s borders after the U.S. killing of a top Iranian commander.

Khamenei’s address came amid a deepening crisis for Iran as it grapples with unrest at home and rising pressure from abroad.

Tension has steadily ratcheted higher since 2018, when the United States withdrew from Tehran’s nuclear pact with world powers and reimposed sanctions that have hammered the economy.

The standoff erupted into tit-for-tat military strikes this month, when Washington killed top commander Qassem Soleimani in a drone strike on Jan. 3 and Iran launched missile strikes at U.S. targets in Iraq on Jan. 8. 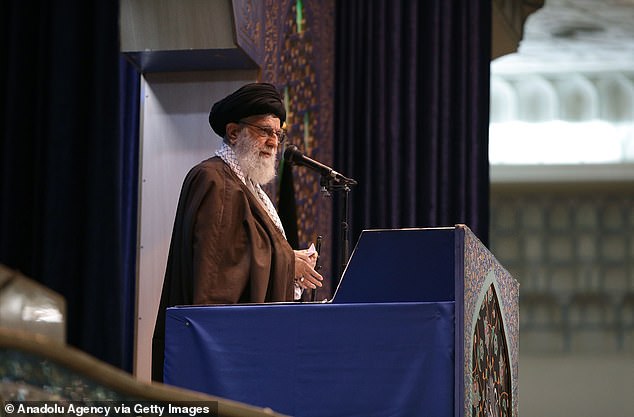 Supreme Leader of Iran, Ali Khamenei gives a sermon before leading a Friday prayer for the first time in eight years at Imam Khomeini Mosalla in Tehran, Iran on Friday 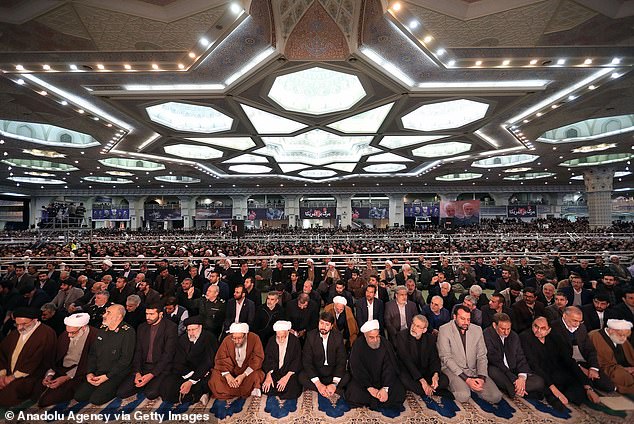 In the tense aftermath, a Ukrainian airliner was shot down by mistake. But it took days for the Guards to admit this and protesters directed their rage at the elite force and the clerical system it was set up to defend.

‘Our enemies … were happy that they found an excuse to undermine the Guards, the armed forces and our system,’ Khamenei said in his sermon, heaping praise on the Guards for protecting Iran and renewing a call for U.S. troops to leave the region.

He said Quds Force soldiers were ‘fighters without borders’.

But Russia lent Iran some support over the airliner disaster, saying it had been shot down when Tehran was spooked by reports of advanced U.S. stealth fighters in the area.

‘I’d like to underline the edginess that always accompanies such situations,’ Foreign Minister Sergei Lavrov said.

barbs, Donald, trades, Trump, With
You may also like: