President Donald Trump said Monday that he is fighting his increasingly desperate effort to remain in office by finding a way to overturn the vote in battleground states on behalf of his supporters – not for his own benefit.

Trump has maintained a drumbeat of unsupported claims of large-scale fraud through the Thanksgiving weekend and into Monday, despite a devastating Appeals  court ruling against him in Pennsylvania and a Wisconsin recount that resulted in a boost for President-elect Joe Biden despite Trump paying for the count.

‘I’m not fighting for me, I’m fighting for the 74,000,000 million people (not including the many Trump ballots that were ‘tossed’), a record for a sitting President, who voted for me!’ Trump tweeted.

The president tweeted that he was fighting for the 74 million people who voted for him, not for himself, even as he continues to claim he won the election

In Wisconsin, where in keeping with state law Trump’s campaign paid $3 million for a recount in two heavily-Democratic counties, Biden gained 87 votes.

That hasn’t kept Trump from keeping up his attacks on the vote count even after his administration finally allowed for transition activities to go forward.

In Georgia, where a recount also made no significant difference, Trump attacked the state’s Republican governor as ‘hapless’ on Monday.

‘Why won’t Governor @BrianKempGA, the hapless Governor of Georgia, use his emergency powers, which can be easily done, to overrule his obstinate Secretary of State, and do a match of signatures on envelopes. It will be a ‘goldmine’ of fraud, and we will easily WIN the state,’ he tweeted. 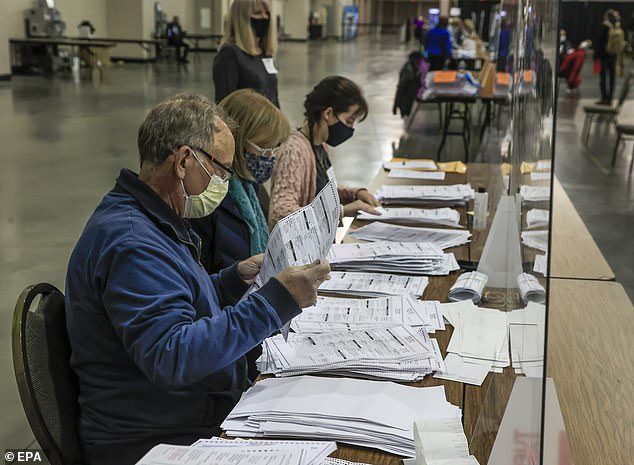 Trump and other loyalists have also attacked Georgia’s Republican Secretary of State Brad Raffensperger over his repeated statements vouching for the count in his state.

‘My job as secretary of state is to make sure we have fair and honest elections, follow the law, follow the process. When you lose an election, you should leave quietly. It’s the will of the people that has been expressed, he told the Atlanta Journal-Constitution Saturday.

Trump lawyers Rudy Giuliani and Jenna Ellis are expected to join an Arizona Republican hearing-style event Monday, similar to one in Gettysburg last week where Trump called in and repeatedly asserted that he won the election.

Meanwhile, Biden is going ahead with his transition, announcing members of his communications team, amid reports about the economic team he is putting in place.

Although Trump stated outright that he is ‘not fighting for me,’ there are a number of ways in which Trump will be at a disadvantage once he is out of office. Prosecutors in New York are investigating his finances and tax filings, he has been under a multi-year audit from the IRS, and he will no longer enjoy protections under Justice Department policies from prosecution while in office. Trump has denied wrongdoing. He continues to face questions about whether he would seek to pardon himself or family members, although this would only apply to federal crimes, not potential allegations regarding state crimes.

Despite his fighting posture online, Trump acknowledged the difficulties he faced in a call-in interview with Fox host Maria Bartiroma Sunday.

‘Well, the problem is, it’s hard to get into the Supreme Court,’ he told her on ‘Sunday Morning Futures.’

‘I’ve got the best Supreme Court advocates, lawyers, that want to argue the case, if it gets there. They said, ‘It’s very hard to get a case up there,’ Trump added. ‘Can you imagine, Donald Trump, president of the United States, files a case, and I probably can’t get a case.’

Donald, to, tries, Trump, up, whip
You may also like: