This 999 call reveals the dramatic moment a woman gave birth in the back of her car as the panicked new father tells an operator his address is: ‘M5 junction 14’.

Sam Parrett, 31, from Bristol, had to call emergency services after his wife Leanne, also 31, went into labour while on route to the hospital on October 11.

The graphic designer pulled over to call for help but within a matter of minutes his wife was heard giving birth to baby Sebastian along the busy motorway. 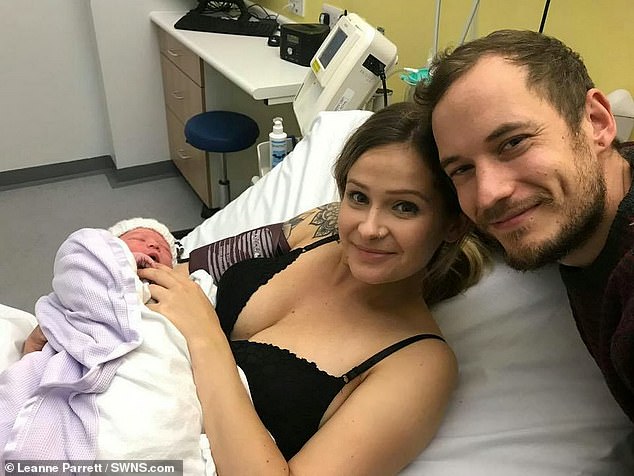 Leanne Parrett, 31, with husband Sam Parrett, 31, and baby Sebastian at Gloucestershire Royal Hospital. The couple were driving along the M5 when Mrs Parrett went into labour 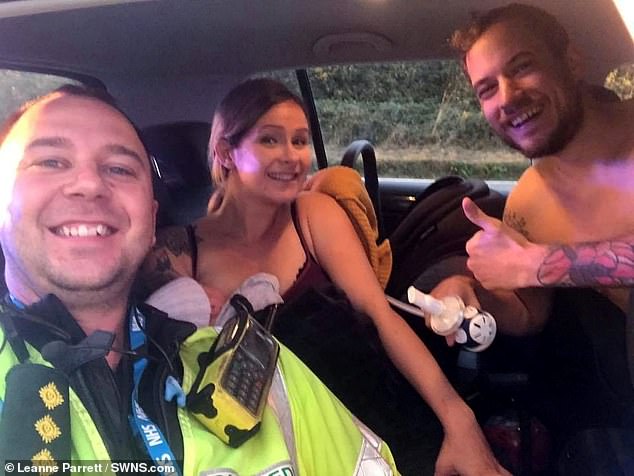 During the call father-of-two Mr Parrett was heard saying to call handler Charlie Passmore: ‘We’re driving to the hospital and it’s rush hour and my wife is screaming, telling me she needs to push.’

Mr Passmore asked the panicked father for his address to which Mr Parrett replied: ‘Junction 14 of the M5 in Thornbury’.

After explaining they were on a motorway lay-by, the screams of Mrs Parrett and the baby could be heard in the background and Mr Parrett told Mr Passmore that his baby had arrived by announcing: ‘The baby’s here… I wasn’t expecting that.’

The exact moment the healthy 8lb 2oz baby was born can be heard in an audio clip of the phone call released by the ambulance service. 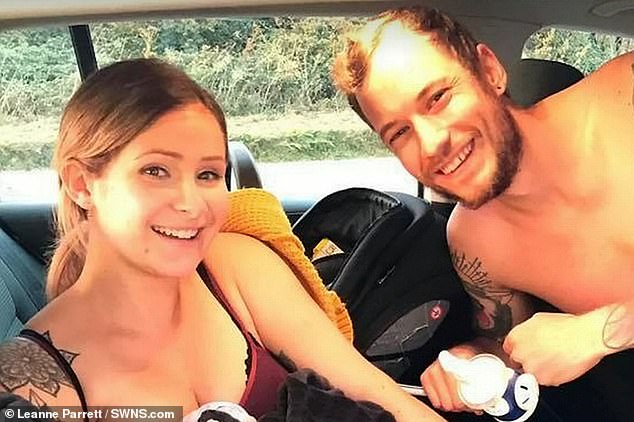 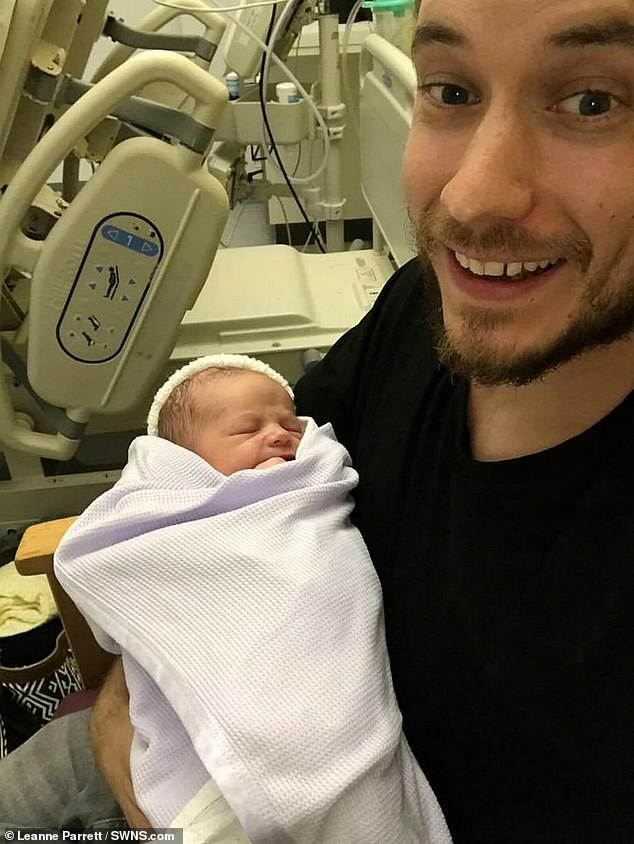 Mr Parrett with baby Sebastian at Gloucestershire Royal Hospital. The couple were booked in for an induction at the hospital when Mrs Parrett fell into labour

Paranormal Investigator Mrs Parrett said: ‘I was squatting in the back seat and I just needed to push, and within two pushes he was out and Sam grabbed him, and then he started to cry.

‘The call handler was amazing and stayed on the phone with Sam the whole time until the ambulance arrived. They made sure Sam knew what to do immediately following the arrival of Sebastian.’

Mr Passmore instructed Sam to clean Sebastian and keep Mrs Parrett and the newborn warm until the arrival of a paramedic.

Following the chaotic birth Mrs Parrett took a selfie with her new son in the back of the car.

She had been booked in for an induction at Gloucestershire Royal Hospital on , October, 11, when she fell into labour. 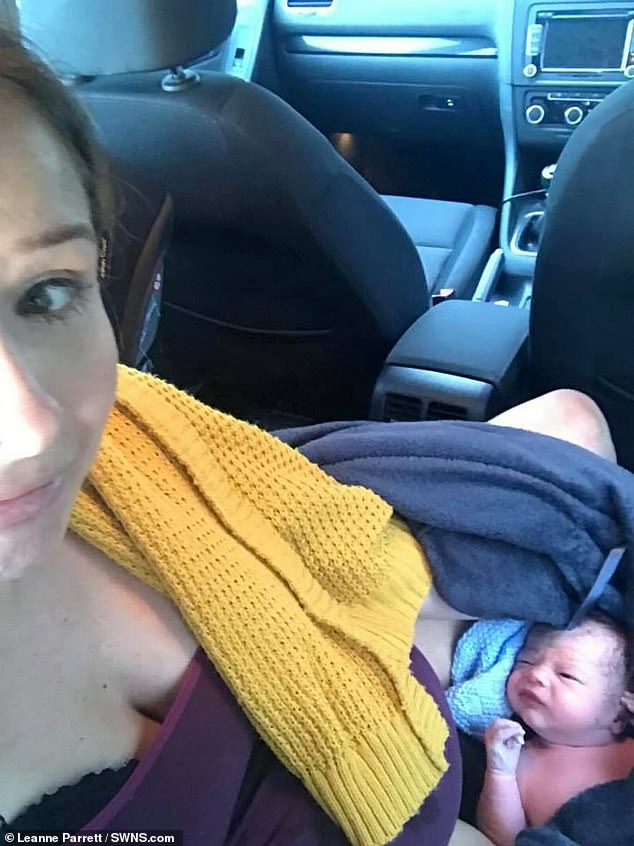 Mr Passmore said: ‘The call came to me and it was clear from the start this was going to be an emergency birth as they were still on the motorway.

‘Pregnancy incidents are one of the most unpredictable calls we face, as there are multiple scenarios that could change at any time so I knew I had to be fully focused.

‘After I gathered the basic information about the scene and the patient details, the baby had already started to show, so time was of the essence. 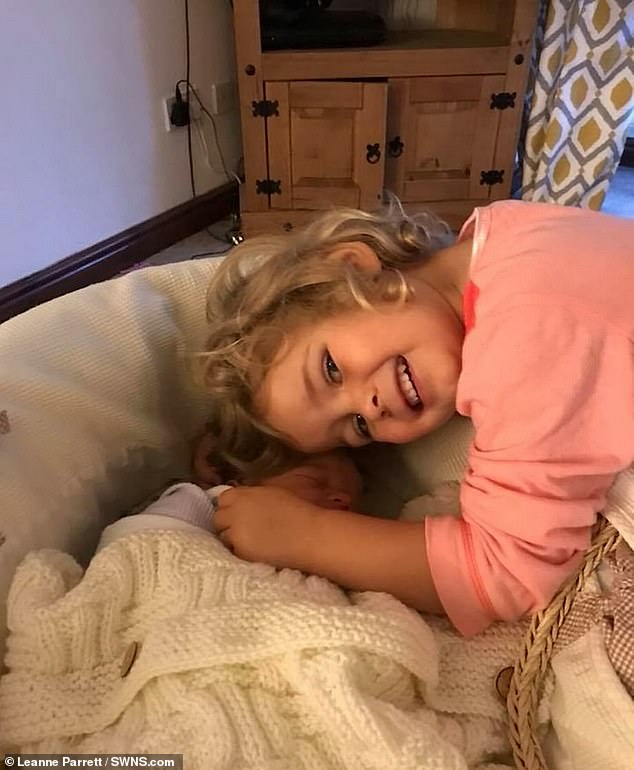 Pictured: Baby Sebastian, who was the couple’s second child, with his older sister Imogen

‘This was a brilliant call to be a part of and a wonderful moment that I will never forget and I wish them all the best of luck.’

Four weeks after baby Sebastian was born, the family, including Sebastian’s older sister, Imogen, met up with Mr Passmore and the paramedics who helped deliver the baby safely. 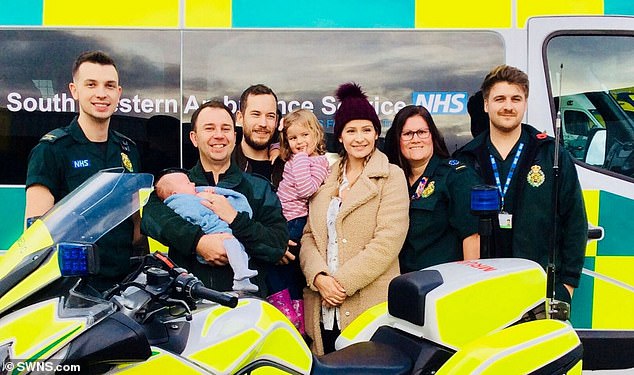 Mrs Parrett said: ‘I am so so thankful for everything the NHS has to offer and these wonderful people made a scary and stressful situation so calm and memorable.’

Emergency care assistant Lloyd Easton, who went to the scene in an ambulance, said: ‘This was one of the best jobs I have ever been to.

‘As a family they can cherish that terrifying but incredible hour of their lives forever and I’m so glad we were able to be a part of it to make sure they were all safe and well.’