This is the terrifying moment a speeding driver runs through a red light an narrowly misses a crowd of pedestrians using a crossing.

The video, which was filmed in Cheboksary, Russia, last week, was captured on a nearby motorist’s dashcam and shows roads covered in ice and snow.

With snow coming down, the traffic comes to a stop as the traffic light changes from green to red and about a dozen pedestrians begin using the crossing.

Before they have made their way to the other side, a dark-coloured taxi comes hurtling towards the crossing and it seems certain the pedestrians are about to be mowed down.

But miraculously, the driver hits the brakes and manages to skid through a small gap in the group of pedestrians.

The driver and passenger who caught the footage on their dashcam gasp as the dark-coloured car skids sideways into the snowy embankment.

While one pedestrian jumps back to get out of the way, the people in front seem to barely even notice they just survived a near-miss with the speeding car. 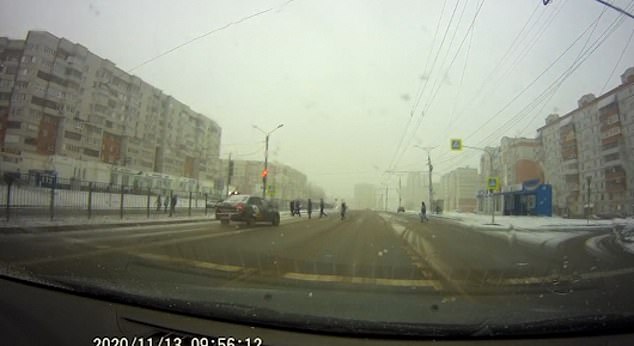 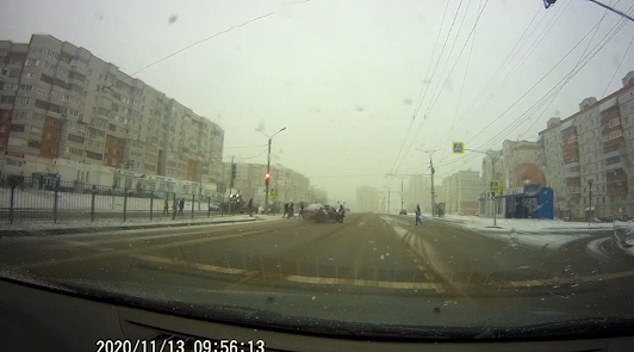 Although the taxi seems on a certain collision course with the groups of pedestrians, it manages to skid through a narrow gap in the crowd leaving the people uninjured on crossing 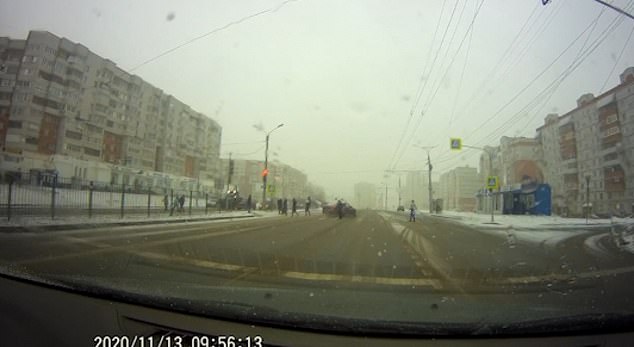 It comes to a stop after crashing into a wall of snow and seemingly no one is seriously injured.

The pedestrians then finish crossing the road apparently unfazed by their terrifying near-miss.

As soon as the traffic light turns green, the shocked motorist who caught the incident on camera carries on as normal.

And, driver, light, Mira, Red, runs
You may also like: