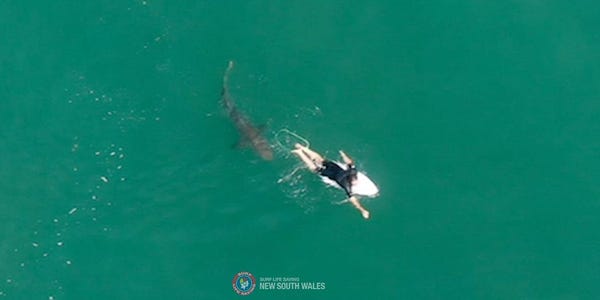 Drone footage from Australia shows the tense moment a professional surfer paddled within inches of a shark off the east coast of the country.

Australian world championship surfer Matt Wilkinson was paddling in from a surf at Sharpes Beach off the coast of Ballina, just north of Sydney, when he came across a five-foot-long shark on Wednesday, according to a press release from Surf Life Saving NSW, a community water rescue organization that recorded the encounter.

It remains unclear exactly what type of shark it was in the water. Surf Life Saving NSW called it a "white shark," while The Guardian and Reuters said it was a great white shark.

The drone footage, which was being filmed to warn surfers of dangers in the water in real-time, shows the shark swimming close to Wilkinson before quickly darting away.

"I was surfing out the back at Sharpes Beach and just cruising on my own and I heard a splash and a noise and looked around and couldn't see anything," Wilkinson said in the press release. "Then the drone came down and told me that there was a dangerous shark in the area, return to the beach. I got to the shore feeling a bit weird and the lifeguards showed me the footage and I realized how close it came without knowing it was there. It looks like it's going for my leg and it's changed its mind."

"I was tracking it and notified the lifeguards and used the speaker on the drone to get everyone out of the water. Within 10 seconds it was at the surfer and five seconds later it was gone," he told Surf Life Saving NSW.

Monks told Australia's ABC News that he wasn't sure why the shark decided to turn away from Wilkinson.

"It could have been something as simple as just bumping into his leg rope, or it might have been the drone. Marine creatures have been known to dart away when the drone does come over," he said.

Wilkinson told Surf Life Saving NSW that he felt safe knowing there was a drone watching out for him on the water, and having surfed his entire life, he figured the shark wasn't that interested in him.

" I'm just glad today the shark reconsidered at the last second," he said.