Amsterdam: It prided itself on a successful "intelligent" lockdown earlier this year, but criticism is growing in the Netherlands as infection rates near the top of the European charts.

Statistics suggest 20 to 30-year-olds are driving the flare, which is acute in Amsterdam, Rotterdam and The Hague. 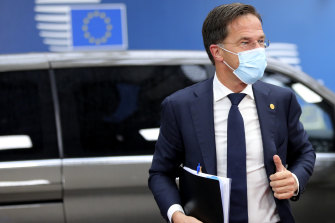 Dutch Prime Minister Mark Rutte has warned that not enough people are following the rules to limit the spread of the coronavirus.Credit:AP

On Sunday, the Netherlands Institute for Health Services Research recorded the 14-day cumulative number of COVID-19 cases per 100,000 people as 345 in the Netherlands, with only Belgium and the Czech Republic higher. Britain's cumulative case number stands at 242.

In a press conference on Friday, the Prime Minister, Mark Rutte, was uncharacteristically prickly when urging 17.4 million Dutch people to follow the rules: a 10pm curfew for nightlife, face masks advised in public spaces, three guests maximum in houses and an appeal to work from home.

"We aren't keeping to the rules enough," said Rutte. "There are too many people, young people but also other groups, who think it will be OK for them. But it's not OK. It's completely predictable that if lots of young people are infected, they infect their parents and then their grandparents."

The Prime Minister has given the country another 24 hours to achieve a turnaround in infection rates, to account for a time lag before measures introduced on September 30 take effect. But criticism is growing, and on Saturday the head of the country's intensive care association, Diederik Gommers, called for a full lockdown instead of "half-baked measures".

Some experts believe the situation stems from a Dutch liberalism, which is normally seen as a positive.

However, many Dutch now want stricter rules. Research last week showed 66 per cent of people thought the government should introduce tougher measures, compared with 37 per cent in September.

"Mark Rutte doesn't think he should tell us what to do," said Mathijs Bouman, an economist. "It worked in the first round and we had a great summer, but the problem is it's not forceful enough in the second wave. People are fed up with being nice. You can only be a good citizen for so long; we need stricter rules."

Dutch, intelligent, Lo, on, turn
You may also like: