Philippine president’s decision follows The Hague tribunal probe on his drug war that left as many as 20,000 dead. 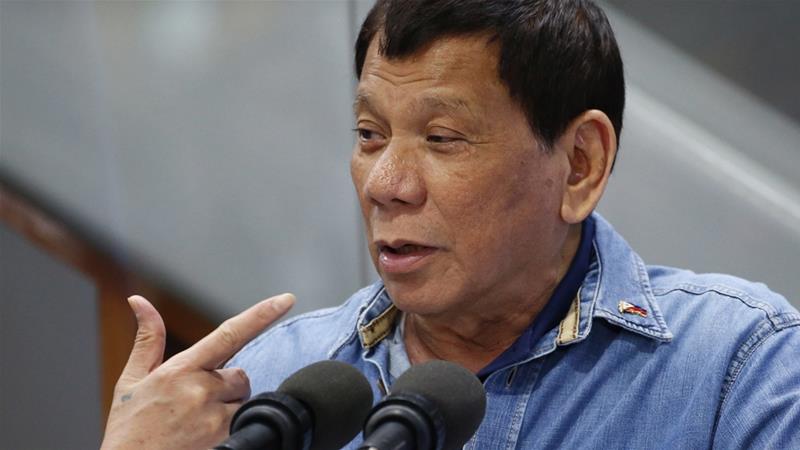 Philippine President Rodrigo Duterte has announced that the country will withdraw from the International Criminal Court “effective immediately”, just weeks after the tribunal announced its investigation into possible crimes against humanity over his deadly war on drugs.

In a statement signed by Duterte on Wednesday, he declared that The Hague-based organisation “has no jurisdiction nor will it acquire jurisdiction” over him.

The Philippines is a signatory to the Rome Statute, a multilateral treaty that created the international court.

But Duterte said the treaty “is not effective nor enforceable in the Philippines”.

“An international law cannot supplant, prevail or diminish a domestic law,” he said, adding that the ICC announcement of an investigation on the drug war is a “violation of due process and constitutional presumption of innocence”.

Under the treaty, withdrawal is only effective one year after a country gives written notice of its decision to the UN secretary-general. A signatory country also can “not be discharged” of any cases already pending in the court before the withdrawal.

Duterte, however, argued that there was “fraud” committed in the process of making the Philippines sign the agreement. Thus Manila has the right to withdraw “effective immediately”.

In response to Duterte’s decision, a majority of the Philippine senators signed a resolution declaring that termination or withdrawal from the agreement is only “valid and effective” with their consent. The Philippine Senate ratified the treaty in 2011.

In February, the ICC announced that it had taken the first step to probe Duterte over possible crimes against humanity in relation to his ongoing drug war, which has left as many as 20,000 people dead.

The case stems from a complaint filed before the international court in 2017 accusing the Philippine president of ordering the killings “repeatedly, unchangingly, and continuously”.

Duterte said that even if the ICC has jurisdiction over him, the accusations against him “do not fall under the enumerated grounds” of the international law.

“The acts allegedly committed by me are neither genocide nor war crimes. Neither is it a crime of aggression or a crime against humanity,” he said.

He also defended the police officers involved in the deadly drug operations, saying they “lacked the intent to kill”.

According to police reports, 3,967 “drug personalities” were killed for “resisting arrest” during police operations between July 1, 2016, and November 27, 2017.

But an opposition senator said the death toll in the drug war had surpassed 20,000, since Duterte came to office on June 30, 2016.

On Wednesday, Senator Antonio Trillanes said that by withdrawing from the ICC, Duterte “has practically admitted that he is guilty of the allegations filed against him”.

“The day of reckoning is near,” he said in a statement.

In a statement to Al Jazeera, Param-Preet Singh, associate director at the Human Rights Watch’s International Justice programme, said Duterte’s decision was not surprising as he “has long showed disdain for the rule of law”.

“Duterte’s statement highlights the urgent need for a UN-led investigation into the drug war killings,” Singh said, adding that an inquiry would add international pressure on the Philippine government to stop the killings.

On Wednesday, Duterte said the ICC “is being utilised as a political tool against the Philippines”.

In recent days, Duterte had also attacked the international human rights officials involved in the investigation, calling Agnes Callamard, UN special rapporteur to the Philippines, as “skinny” and “malnourished”, and referred to Fatou Bensouda, the ICC prosecutor investigating the drug war, as “that black woman”.

That prompted Zeid Ra’ad al-Hussein, UN High Commissioner for Human Rights, to denounce Duterte’s statement as “disgraceful” while calling for his “psychiatric evaluation”.