Eerie sight of thousands of freshly dug graves in Johannesburg

Eerie photographs have emerged of thousands of freshly dug graves in South Africa as its cases take the country to fifth in the world.

Recently filled graves were photographed at Olifantsveil Cemetery outside Johannesburg preparing for the thousands of deaths the coronavirus pandemic is wreaking on the country.

Despite South Africa being Africa’s most well-prepared country for the pandemic it currently has 538, 184 cases and 9,604 deaths, according to the John Hopkins Coronavirus Resource Centre. 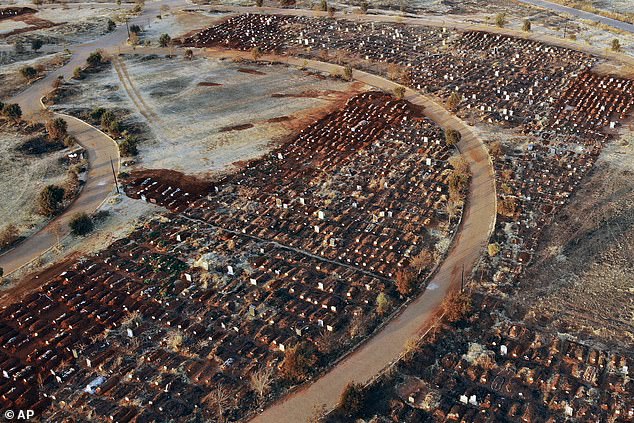 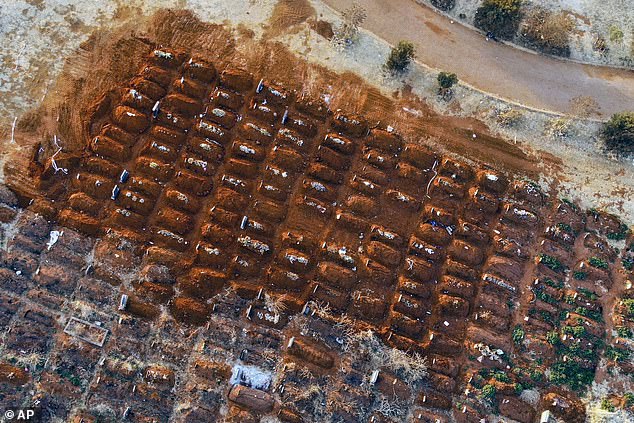 The country has 538, 184 cases and 9,604 deaths, according to the John Hopkins Coronavirus Resource Centre 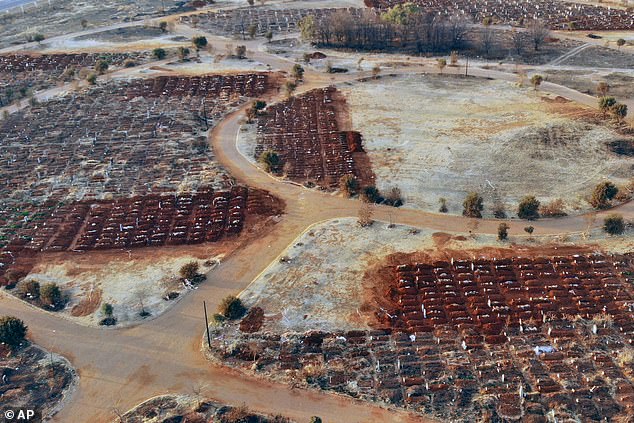 But the death rate is thought to be a lot higher as a South African Medical Research Council report last week showed many coronavirus deaths were going uncounted.

South Africa has conducted at least three million tests, more than any other country in the continent, but it is still not enough and supplies are constantly being snapped up by richer countries.

‘We are fighting this disease in the dark,’ International Rescue Committee expert Stacey Mearns said.

In addition, Africa has only 1,500 epidemiologists, a deficit of about 4,500 and Africa’s younger population means that many infections will be asymptomatic.

Sema Sgaier, an assistant professor of global health at Harvard and director of the Surgo Foundation, thinks the number of infections across Africa could be more than nine million.

The U.S.-based Institute for Health Metrics and Evaluation puts the number at more than eight million.

And Resolve to Save Lives, led by Tom Frieden, former director of the U.S. Centers for Disease Control and Prevention, estimates it could be 14 million.

Preempting its disadvantage South Africa went into one of the world’s strictest lockdowns early on, causing severe economic issues, but the country is still struggling to cope as hospital beds fill up.

The WHO Africa chief criticised the ‘very distorted global market’ in which richer countries have the bulk of testing materials while poorer ones scrape by on just hundreds of tests a day.

Amnesty International warned that African countries, including South Africa, were dishing out tough punishments for citizens during lockdown in April.

One South African church has quietly been marking the country´s ‘known’ number of deaths by tying white ribbons to its fence.

Already, the Rev. Gavin Lock wonders about what to do when the length of fence runs out.

They are considering changing the ribbons to represent ten or 50 people.

While experts say infection tolls in richer nations can be significant undercounts, large numbers of undetected cases are a greater danger for Africa, with many of the world´s weakest health systems.

The World Health Organization calls the milestone a ‘pivotal point’ for Africa as infections in several countries are surging.

The virus has spread beyond major cities ‘into distant hinterlands’ where few health resources exist and reaching care could take days.

Immediately knowing they were at a disadvantage, African nations banded together early in the pandemic to pursue badly needed testing and medical supplies and advocate for equitable access to any successful vaccine.

South Africa’s state is a warning for Africa´s other 53 countries of what might lie ahead.

While dire early predictions for the pandemic have not played out, ‘we think i´s going to be here at a slow burn,’ the WHO´s Africa chief, Matshidiso Moeti, said Thursday.

African nations overall have conducted just 8.8 million tests since the pandemic began, well below the Africa Centers for Disease Control and Prevention´s goal of 13 million per month.

Countries would love to increase testing if only supplies weren´t being snapped up by richer ones elsewhere.

Some 70% of infections are asymptomatic, he has said.

Africa´s young population also might be a factor. Without a dramatic increase in testing, ‘there´s much we don´t know.’

Nigeria alone could have had close to 1 million cases by now if Africa´s most populous country hadn´t acted quickly, the Africa CDC´s Nkengasong said.

Still, with insufficient testing, people live with the fear that loved ones may have had the virus without knowing for sure.

In Burkina Faso, Yaya Ouedraogo lost his uncle and cousin in April. Both were in their 70s with a history of high blood pressure and diabetes, and both had complained of shortness of breath, fever and body pain, he said.

‘They had all the symptoms of coronavirus, but in certain areas no one was investigating it and they didn´t get tested,’ he said.

The WHO Africa chief has said officials don´t think the continent is seeing a ‘silent huge epidemic,’ with thousands dying undetected, but she acknowledged under-reporting of cases.

‘What we´d like to see – to be able to be really confident – is higher testing rates,’ Moeti told reporters last week, and she criticized the ‘very distorted global market’ in which richer countries have the bulk of testing materials while poorer ones scrape by on just hundreds of tests a day.

Moeti also worries about a related danger for which even less data exists: the number of deaths from diseases such as malaria, HIV and tuberculosis as resources are diverted to COVID-19.

Whatever Africa´s real coronavirus toll, one South African church has quietly been marking the country´s ‘known’ number of deaths by tying white ribbons to its fence. The project´s founders say each ribbon really stands for multiple people.

Already, the Rev. Gavin Lock wonders about what to do when the length of fence runs out. Maybe they´ll change the ribbons´ color to represent 10 people, or 50.

Eerie, Fr, of, sight, THOUSANDS
You may also like: