A wildlife photographer shared the incredible efforts conservationists went to preserve a vulnerable species of giraffe.

Sean Viljoen created a short video documenting how a group of wild West African giraffes were transported 500 miles across Niger, the first ever translocation in the country.

Conservationists planned to set up satellite populations of the animals, of which there are only 600 left in the wild, in case something were to go wrong with the group living in the Kouré region. 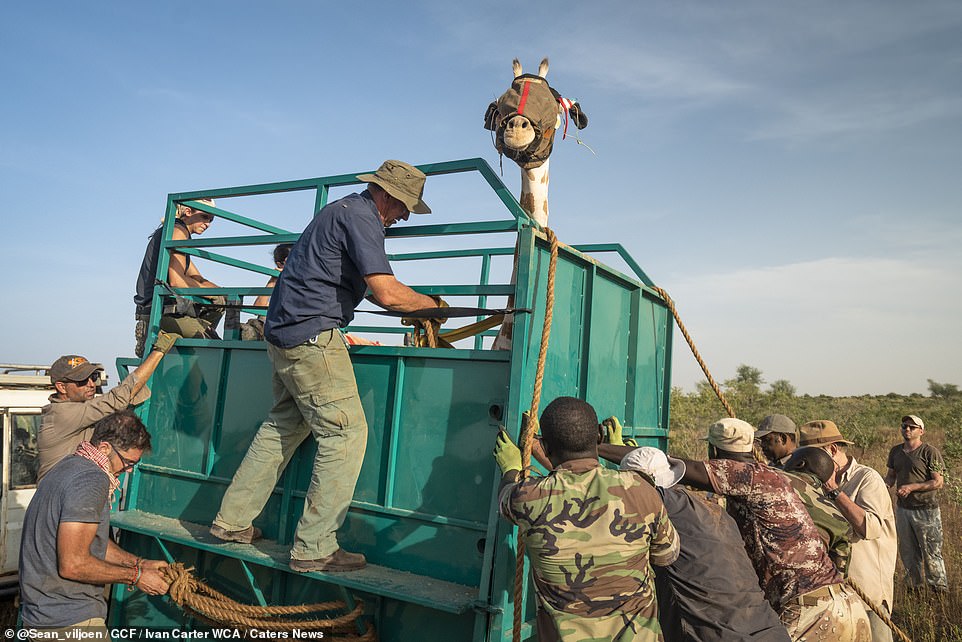 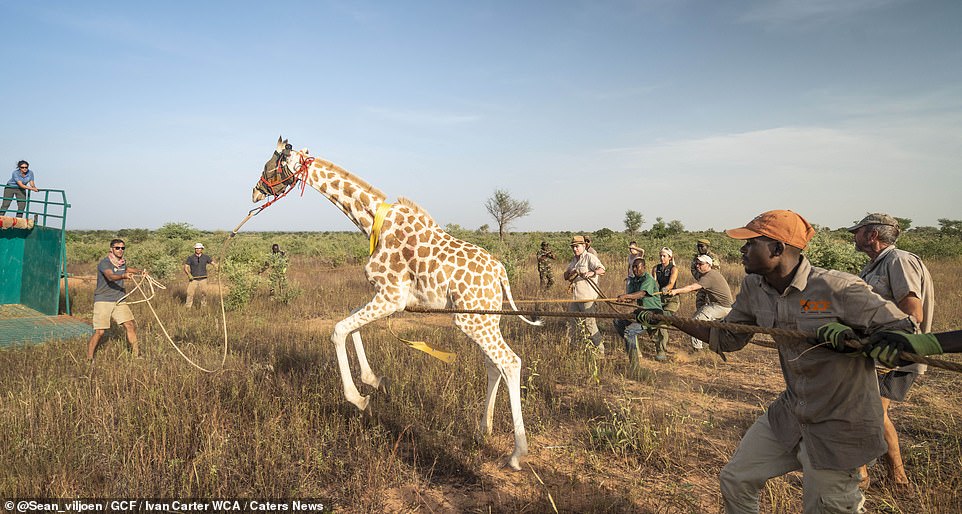 The Niger government and conservationists joined forces to create a satellite populations of the animals, of which there are only 600 left in the wild, in case something were to go wrong with the group living in the Kouré region 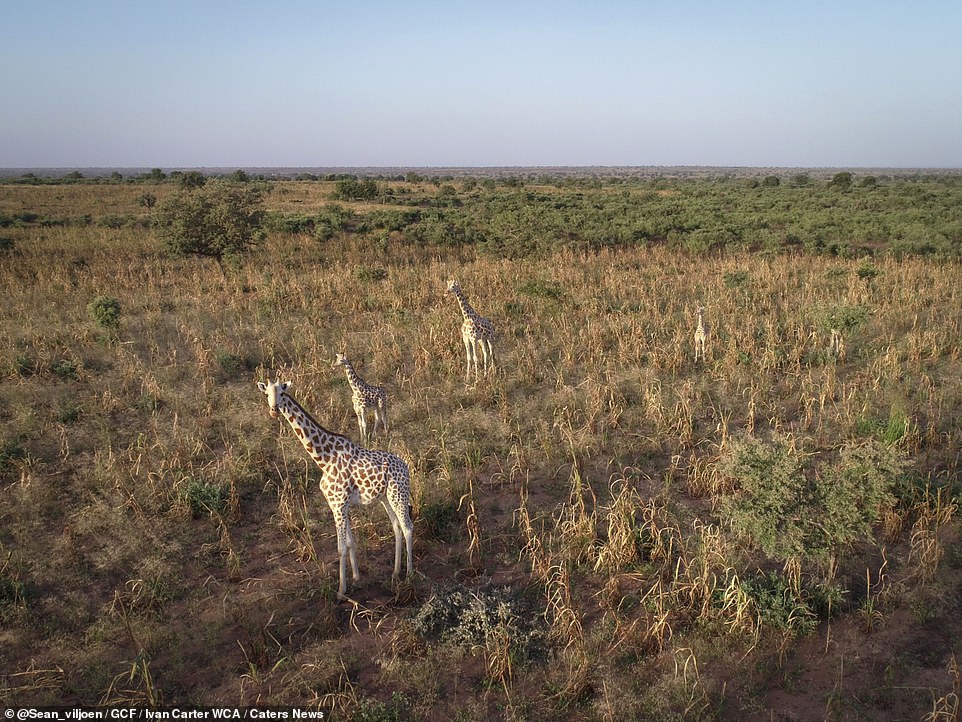 Catching the wild animals was a tall order and involved meticulous planning, with a huge team of people from across the world coming together to help the species

Eight of the vulnerable species, which had been sharing the land with people, were individually selected based on their age and sex to be moved to another location.

Catching and transporting the animals – that are up to six metres tall – took more than two days and a huge team of people, from across the world, and involved moving each giraffe into a roofless ‘chariot’.

In the astonishing footage, several vehicles drive through the Kouré region to find the animals and a wildlife veterinarian steps out of one of the cars and calmly approaches them, firing a dart at one to sedate it.

The men follow the tower of giraffes as they begin to run away and use ropes to quickly pull the darted animal down and give it an antidote. 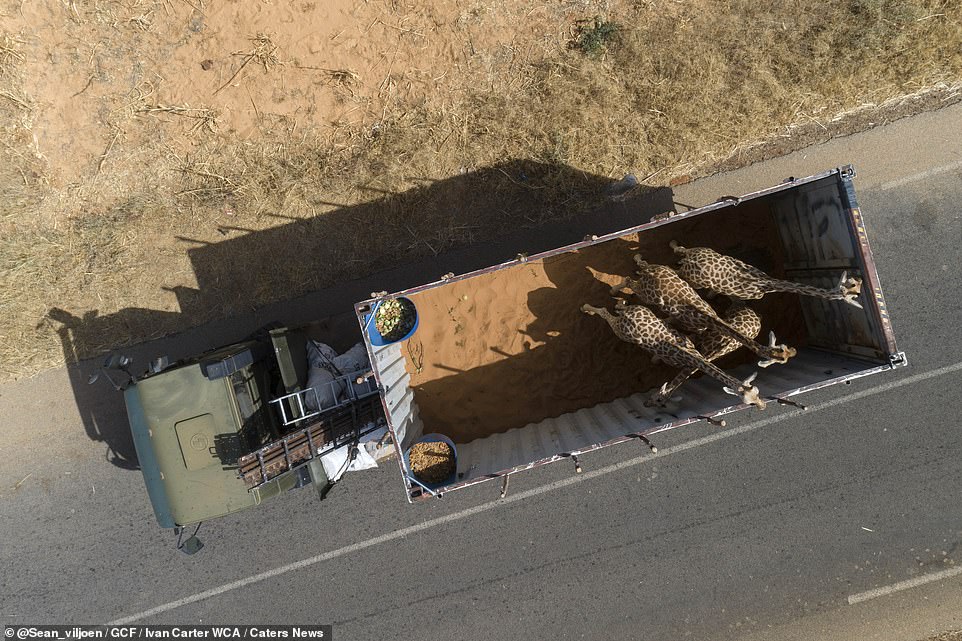 The eight giraffes, which can be up to six metres tall, were transported in open top ‘chariots’ in groups of four to their new home 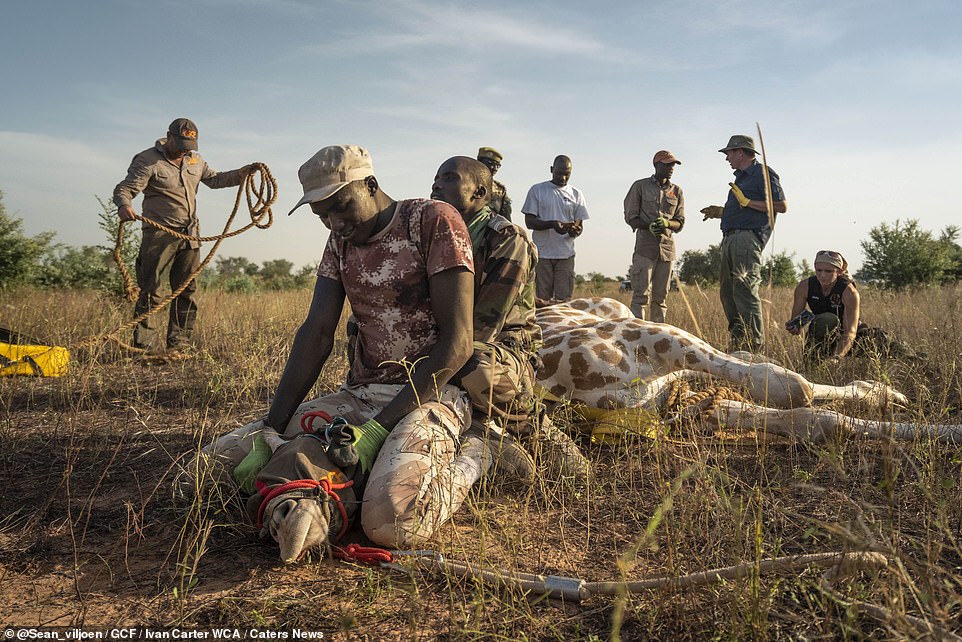 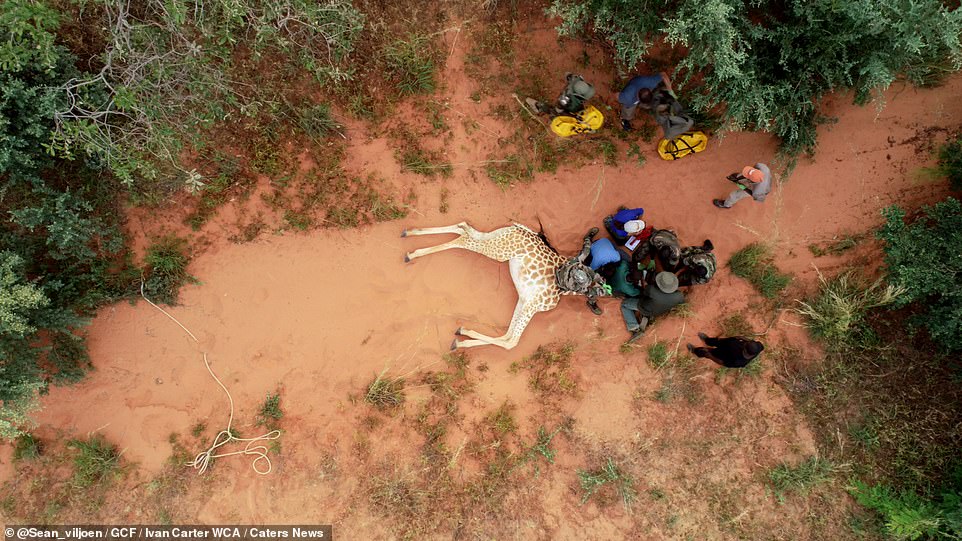 While the animals were sedated the conservationists took blood samples, did medical tests and measured them 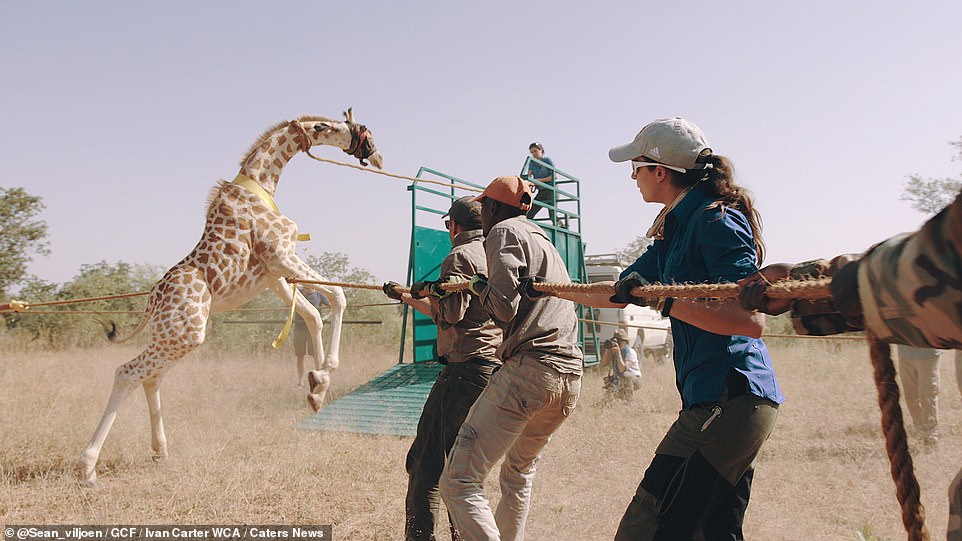 Wearing a hood and attached to ropes, the giraffes were manoeuvred onto the back of a trailer to be taken to an enclosure with the other animals

The startling footage shows the men launching themselves at the animals neck and dragging it to the ground to do blood tests, check for diseases and take its measurements.

Wearing a hood over its head, the giraffe is guided into the back of a trailer and kept in an enclosure with the other seven animals for three weeks.

After getting used to each other they are taken 500 miles in two groups of four in the trailer to the Gadabedji Biosphere Reserve close to Niger’s capital Niamey.

Each journey took more than 48 hours and the project was carried out by the government of Niger with the support of the Giraffe Conservation Foundation (GCF).

The team consisted of the GCF team, additional experts from Southern Africa and the USA to help capture the giraffes, including an experienced wildlife veterinarian and giraffe capture team.

All eight giraffes have now been successfully relocated and are enjoying their time in their new reserve. 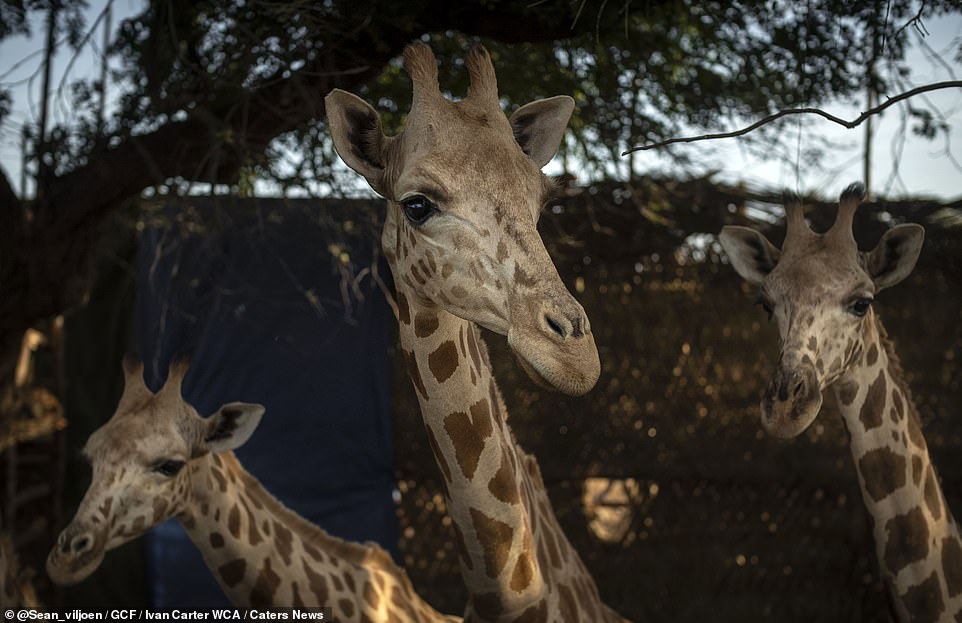 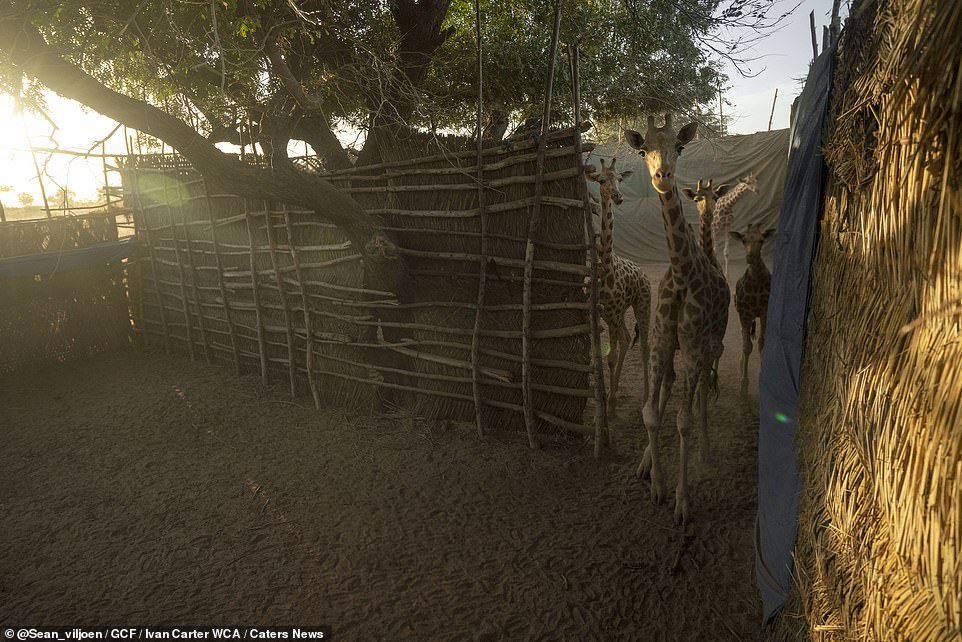 The conservation team consisted of the GCF team, additional experts from Southern Africa and the USA to help capture the giraffes, including an experienced wildlife veterinarian and giraffe capture team

Stephanie Fennessy, co-founder and co-director of the GCF said: ‘Almost 50 years ago, giraffe became locally extinct in the Gadabedji area because of drought and illegal hunting.

‘The re-introduction of giraffe will further enrich the reserve’s biodiversity and contribute to increasing community development and support in the region.

‘Eight giraffes were successfully released in Gadebadji Biosphere Reserve and continued monitoring of the giraffe by GCF together with local community members shows that the giraffe are doing well.

‘Giraffe numbers in Africa have declined by about 30% in the past three decades.

‘There are only about 111,000 giraffe remaining in all of Africa; that is one giraffe for every four elephants.

‘There was a lot of excitement surrounding the translocation and people are happy to have giraffe return to their area’. 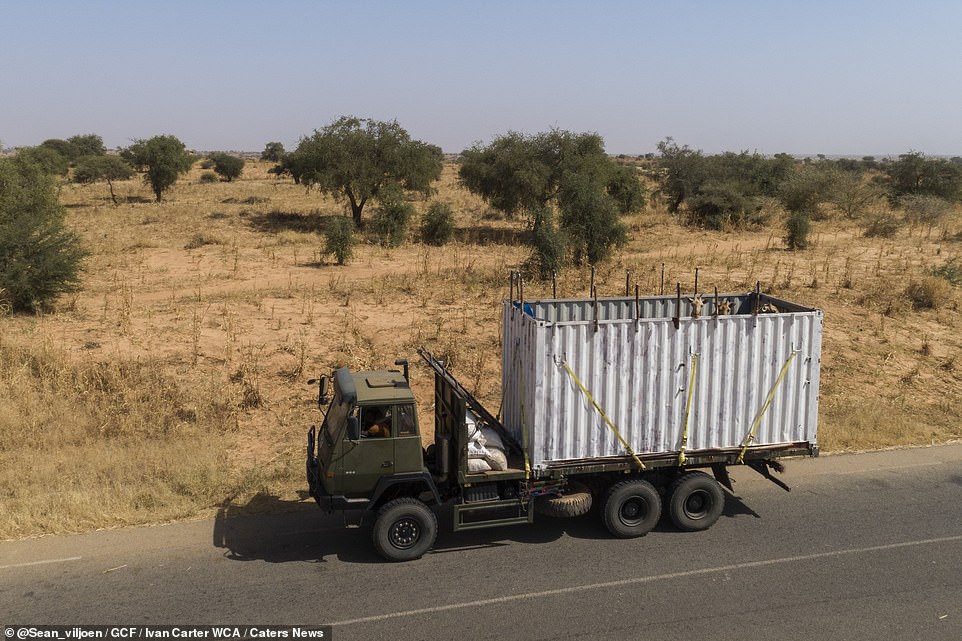 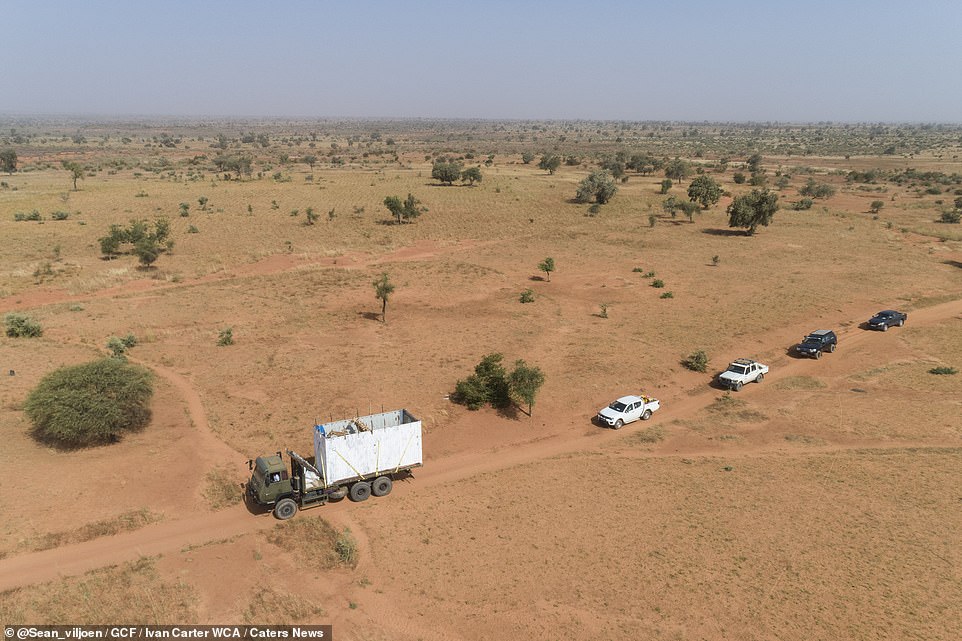 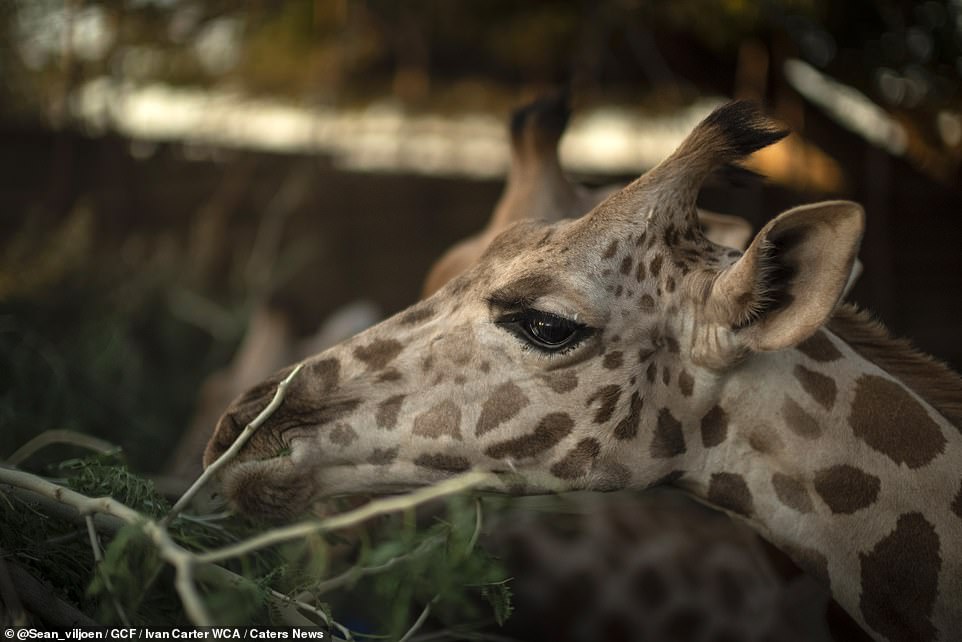 African, Dr, eight, giraffes, West
You may also like: