Two elderly best friends who lost touch for 70 years have finally been reunited after moving to the same care home – in a complete coincidence.

The pair – who were childhood best friends – recognised each other straight away despite having spent seven decades apart. 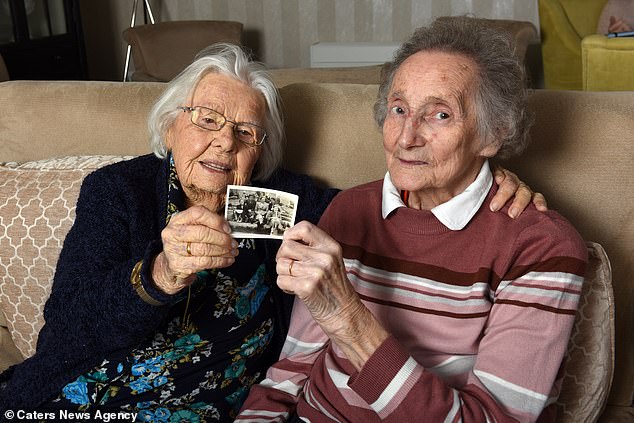 Childhood best friends Nora Boardman (left) and Eileen Gill (right) at the Crispin Court care home in Stafford where they have been reunited after 70 years apart. The pair hold a childhood photo from a trip to Blackpool their families took together (below) 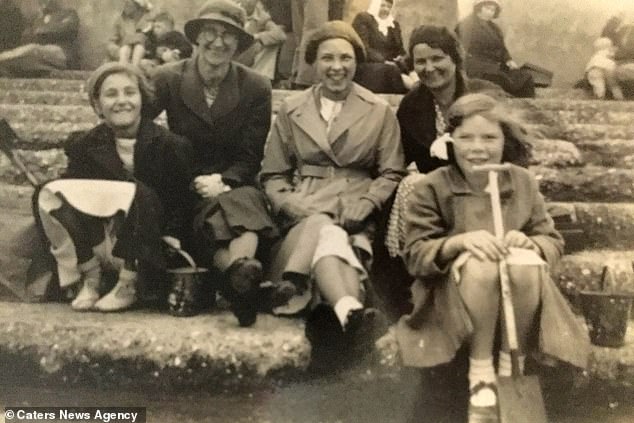 Nora said: ‘I never thought I’d see Eileen again after we went our separate ways as children – so it was so nice to see her.

‘I couldn’t believe she was now going to be living in the same care home as me and we’d get to see each other every day.

‘I feel lucky to have my best friend back in my life, it feels like nothing has changed.’

The childhood friends both grew up in Eccleshall, Staffordshire in the West Midlands, but Eileen moved 20 miles away to the village of Brewood at age of 12 – something which caused the pair to lose touch.

Eileen, who is two years older than Nora, finished school before she was a teenager and went to work on a farm, while after Nora finished school she worked in manufacturing making hand grenades. 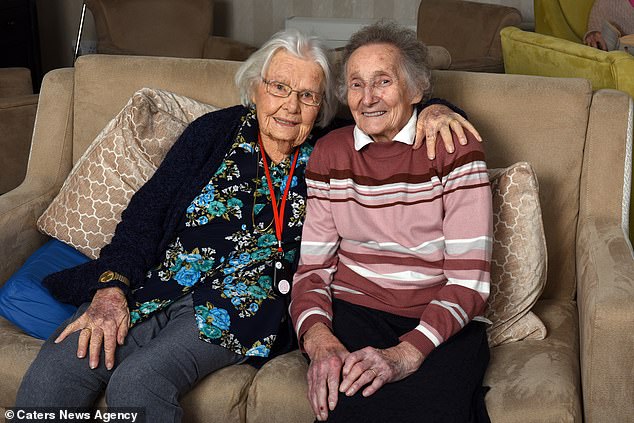 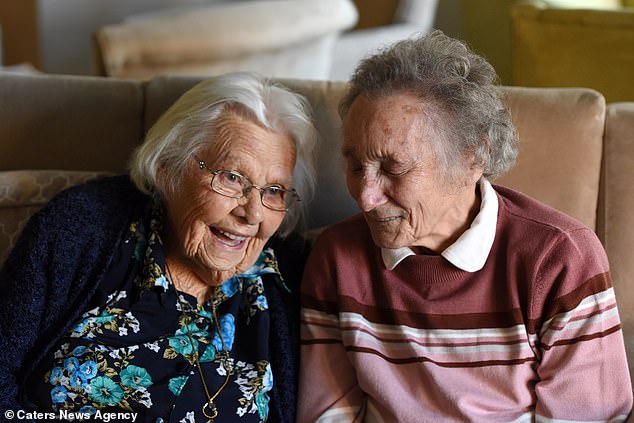 Giggling away: The pair say they have found that they have just as much in common now as they did as children and have rekindled their friendship 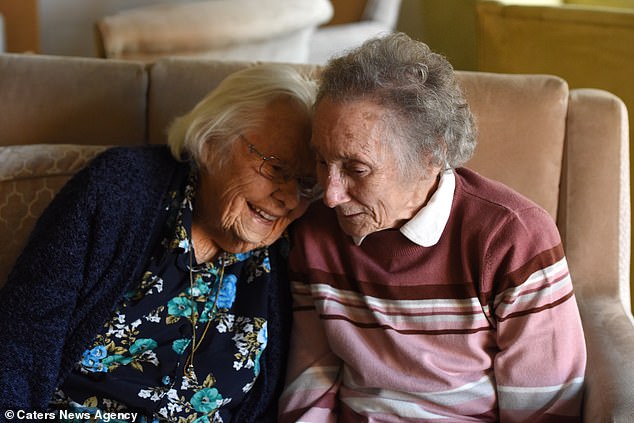 But 70 years later, the once inseparable schoolgirls now spend their days causing mischief in their care home.

And they couldn’t be happier they’re living a few doors down from one another.

Nora said: ‘We try spend a lot of time together – if we don’t see each other much during the day, we’ll always have dinner together.

‘Eileen will come behind me and touch my arm to let me know she’s there.’

Eileen said: ‘The day I got married was the best day of my life – it honestly was.

‘Ted was so good to me and I miss him so terribly much.’

Whilst Nora didn’t have any children, Eileen has three, two daughters and a son as well as six grandchildren and two great children, all of whom come to visit. 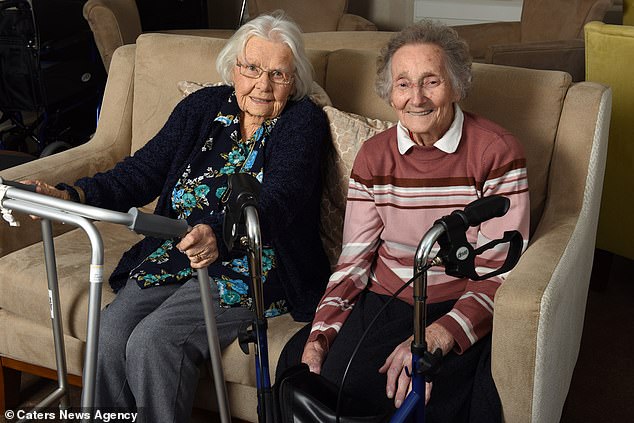 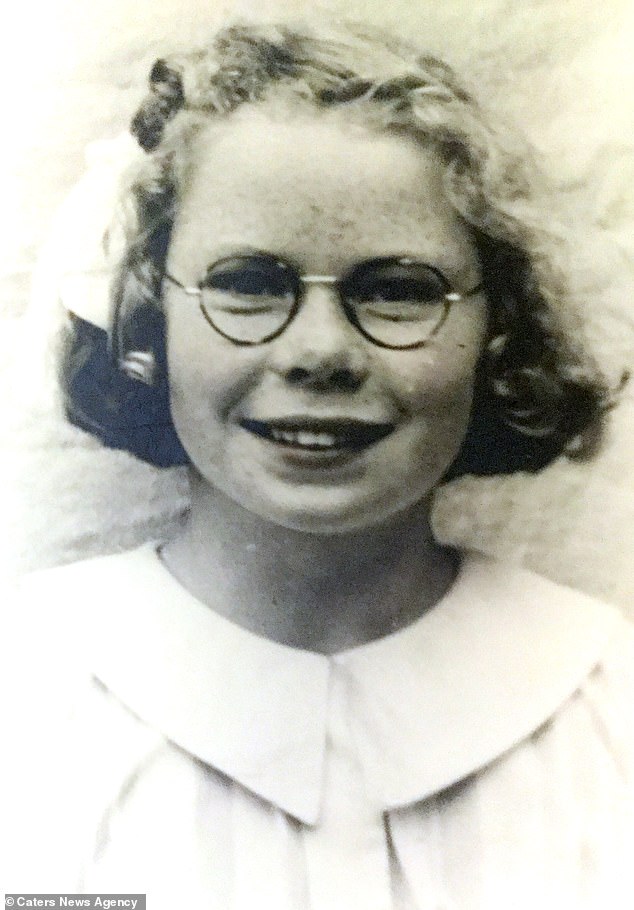 Nora Boardman on her first day at school, circa 1939. After Nora finished school she worked in manufacturing making hand grenades

As Nora doesn’t have any family, Eileen’s family have taken her under their wing.

Nora said: ‘They have all been very nice to me – I feel like an extended part of their family.

‘I couldn’t feel happier that we’re now reunited and get to reminisce on our old memories as well as creating new ones.’

Both pensioners decided to move into the care home after struggling to care for themselves and having several falls in recent years.

After rekindling their friendship in recent weeks, the pair feel like they still have just as much in common as when they were kids.

And the pair have promised if they do part ways again, this time they’ll be sure to stay in touch.

Eileen said: ‘I’m not sure what’s going to happen next but one thing I can say is that it’s the happiest I’ve been in months.

‘I’ve been happy here since day one.’ 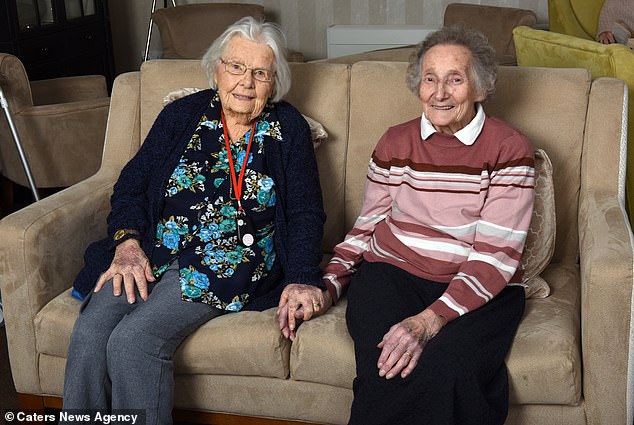