Rock and Roll legend Presley died on August 16, 1977, aged 42 after ballooning in weight and suffering a heart attack on the toilet. 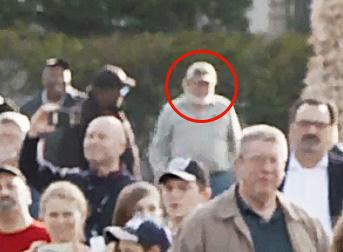 However, truthers now bizarrely claim the fallen idol has been caught on camera at a gathering to mark the date of his birth.

They believe the 'Blue Suede Shoes' singer can be seen mingling among fans at his Graceland home, in Memphis, Tennessee.

During live stream coverage of the celebration – on January 8, 2018 – they say the star can clearly be seen sporting a white beard.

The conspiracy theorists say the idol is seen standing wearing a green baseball cap and standing near three security guards. 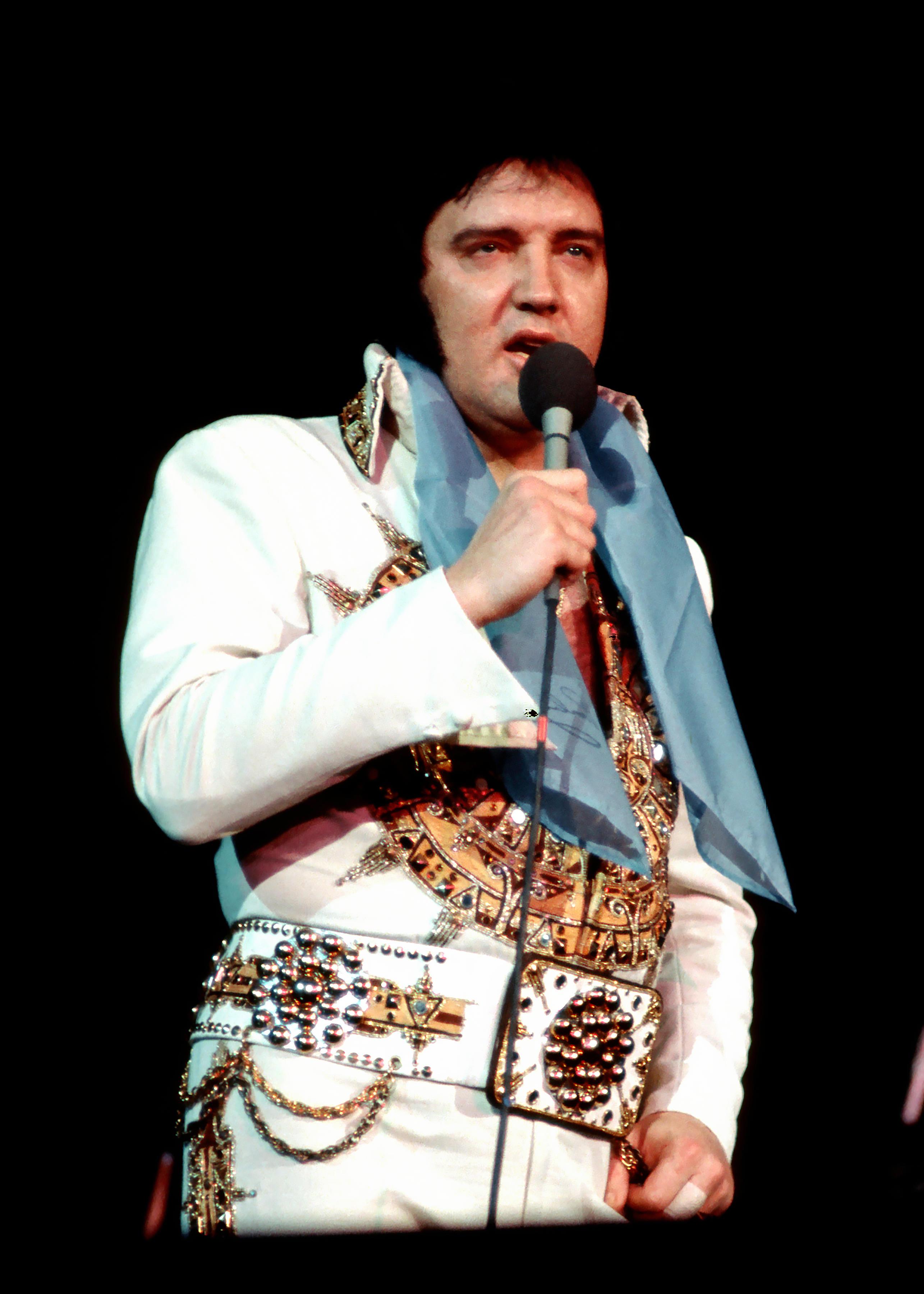 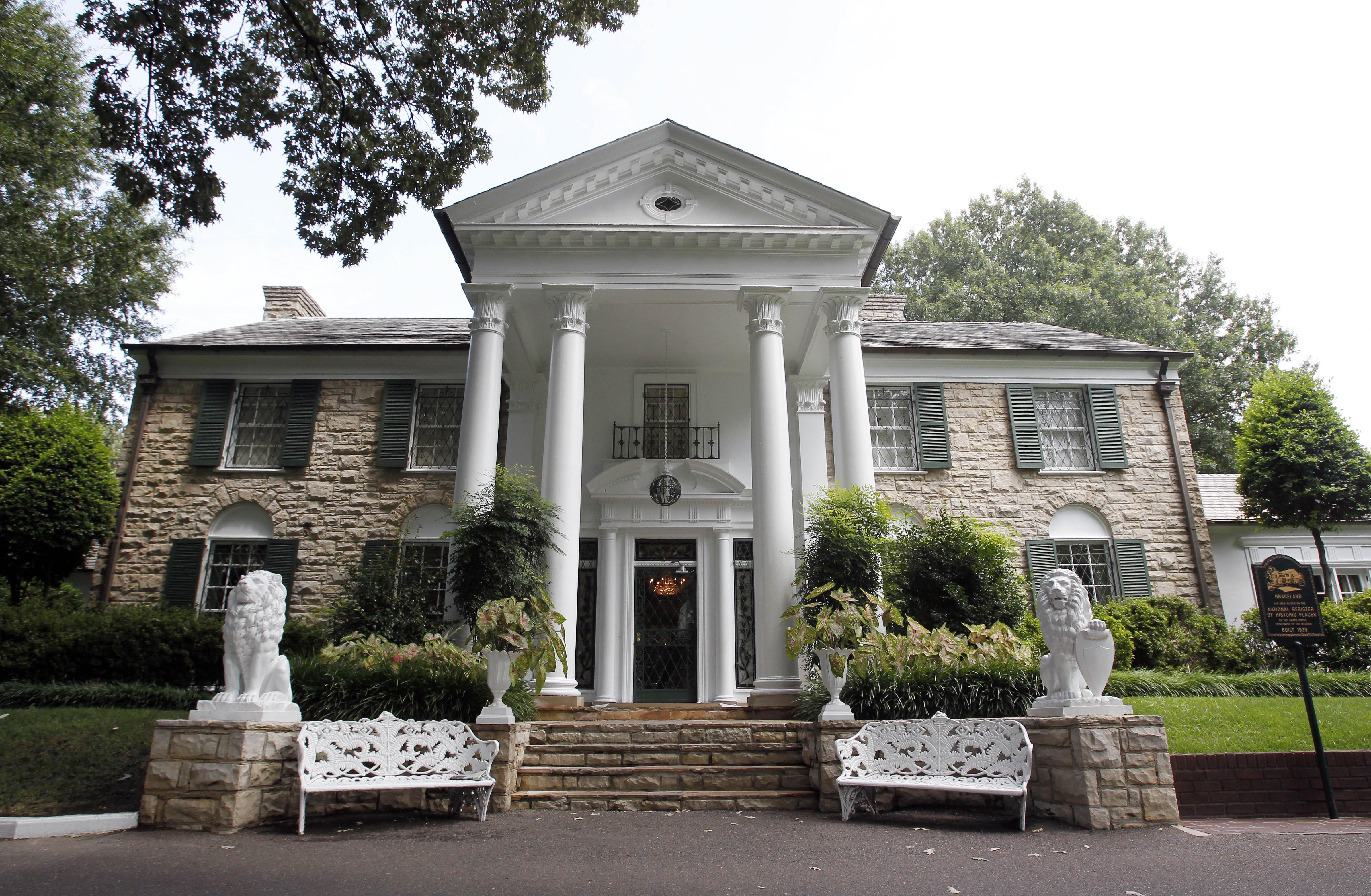 The 'Elvis Presley Is Alive' Facebook page made the claims about the man, who appears in the background of the live stream during a speech.

And remarks by local Councilwoman Patrice Robinson that Elvis is “still alive” during the event, only helped fuel the ludicrous claims.

Making an emotive speech in Graceland, she said: “Elvis is a part of this community and he is still alive. I said he’s alive.

“We’re going to all say happy birthday to Elvis.” 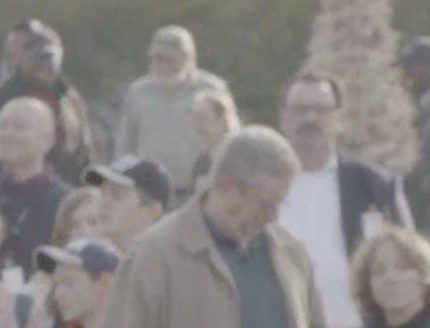 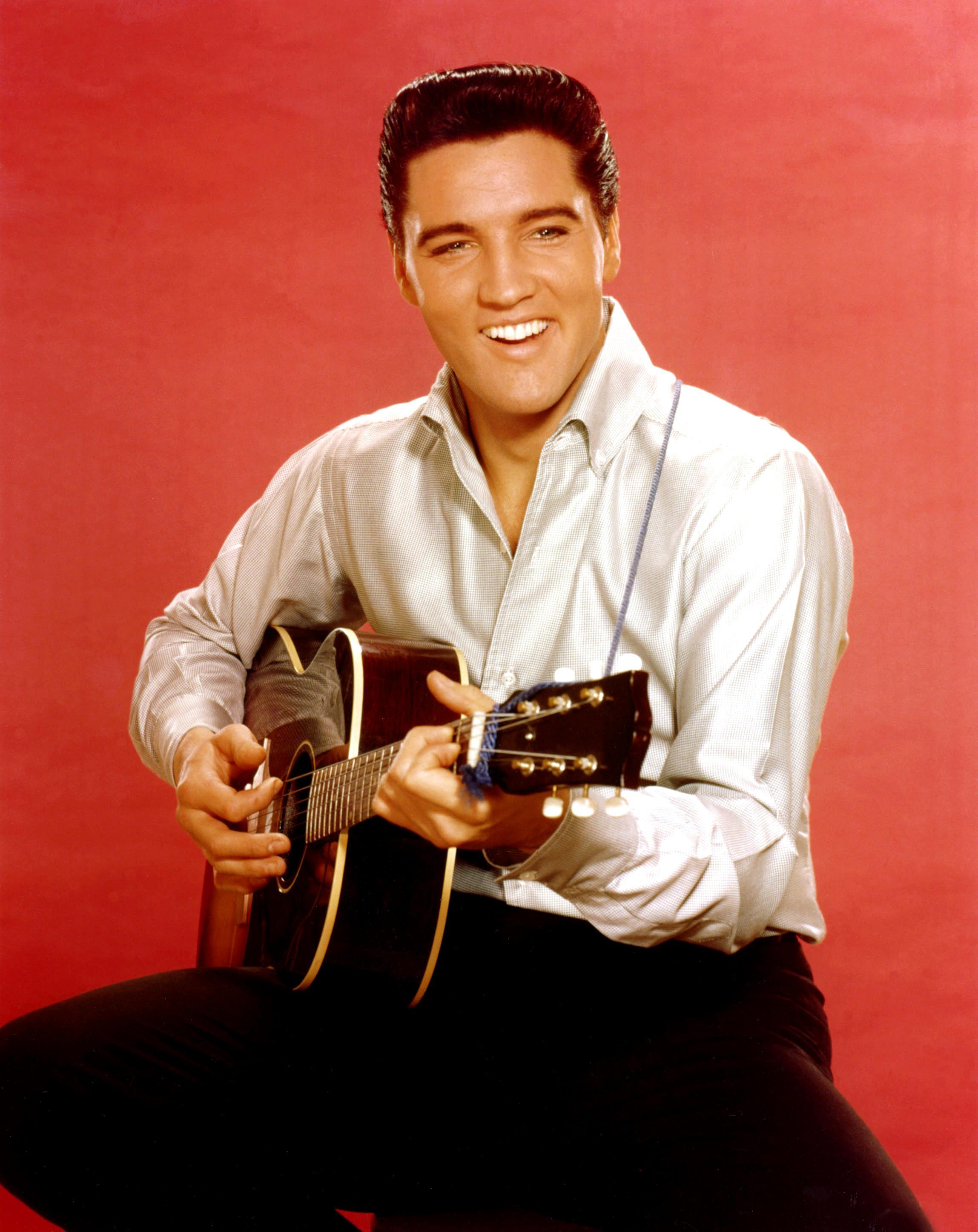 It is pretty obvious she meant that the star is alive was alive in spirit, but some have taken her words literally, reports dailystar.co.uk.

The Facebook page claims: “At the about 32:00 [in the live stream] the security guards open the ropes and let a man in from Graceland.

"Ten go to 32:08 and you will see Elvis with the three security guards in the back (right hand side)!

It's not the first time Elvis has been allegedly spotted at Graceland since his death. 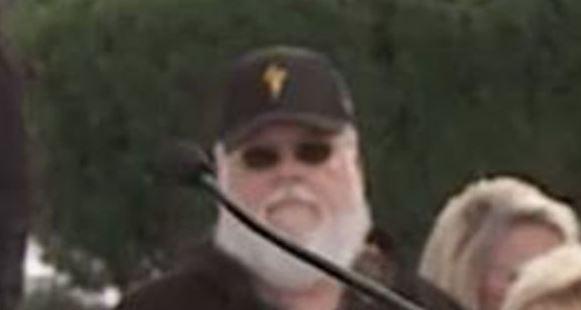 Images of a similar looking bearded man also circulated at a bash to mark his 82nd birthday.

Ever since Elvis died there have been countless theories that he faked his own demise to escape the mounting pressures of fame.

So far there is no evidence Elvis faked his death – despite claims of a new tape purporting to be him surfacing.

We reported earlier this week how the new recording made four years AFTER his funeral is set to further fuel one of the world’s most famous conspiracy theories. 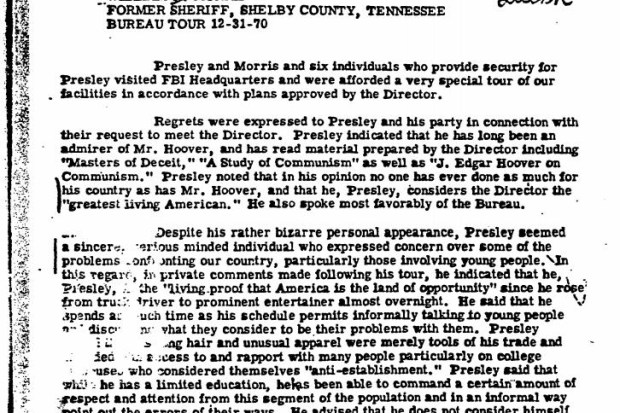 Elvis is alive after being put into the witness protection programme, a book bizarrely claims.

American author Gail Brewer-Giorgio, 79, is behind the bestselling book 'Is Elvis Alive?'.

In it she claims the singer faked his death to escape a group known as 'The Fraternity'.

Ms Brewer-Giorgio claims she has proof (see pic) he enlisted as an undercover FBI agent to infiltrate the organisation.

However, she says was put into witness protection by the government when he was discovered as a mole.

She revealed to Time Magazine in 2017: “Elvis faked his death because he was going to be killed and there was no doubt about it.”

The FBI does hold 683 records concerning Elvis, including documents regarding extortion attempts.

However, the latter does not mention anything about 'The Fraternity', reports Express.co.uk.

In the tape the man — purporting to be Presley  — says he has also travelled all over the world in disguise, all the time fearing one day he would be exposed.

He says: “I realise that sooner or later it’s probably going to end.

“You know I hate to think it’s going to end, but I know sometimes the secret [of being alive] has got to be let out and if it hadn’t have been for getting involved in what I'm involved in now, things and such, maybe it’d be different. 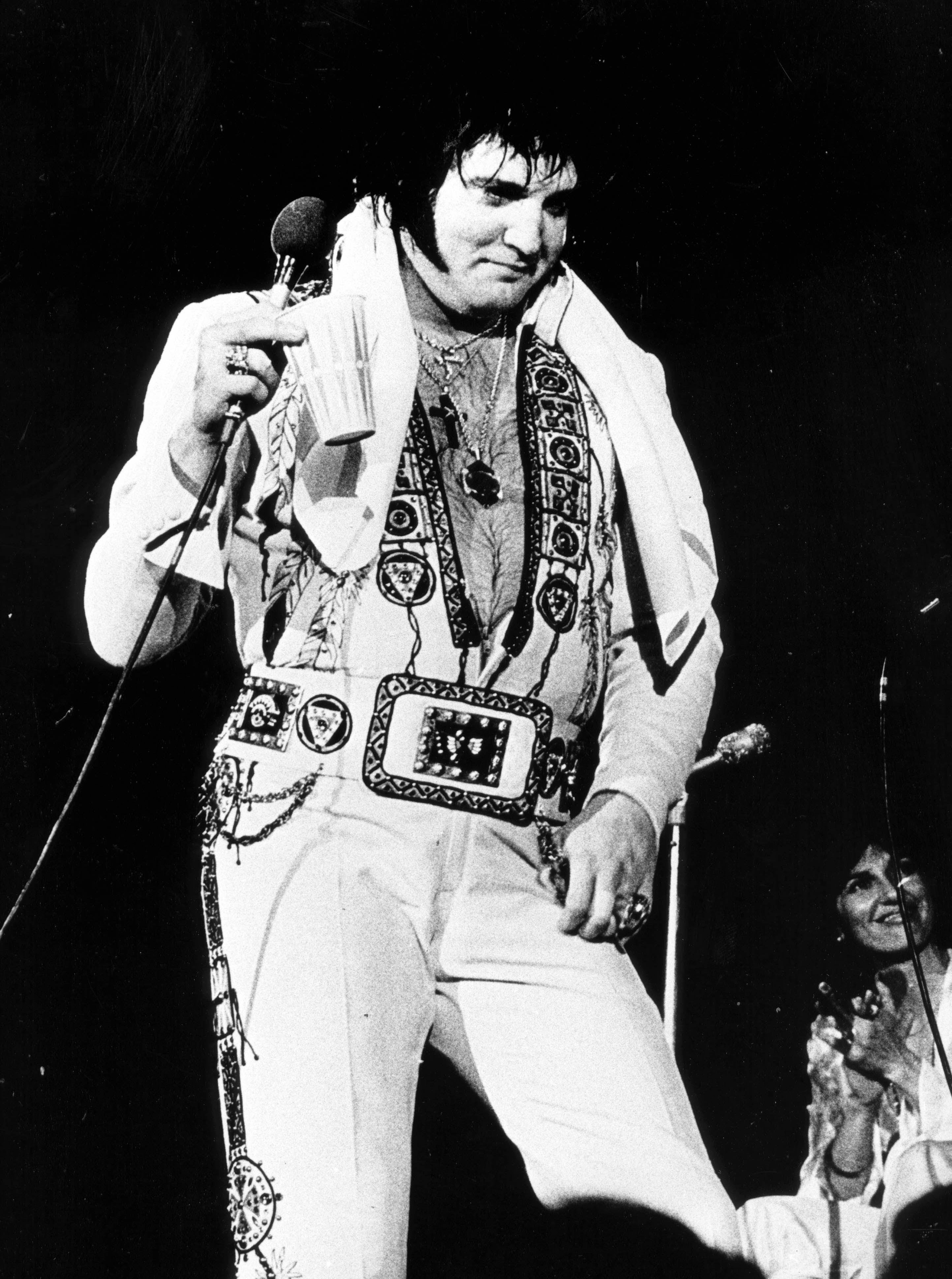 “As far as appearing nationally, I think it would be silly to get back into something that’s taken me this long to get out of.”

In the call, said to be between Elvis and an unknown man in the United States, the King's hiding place is alluded to.

The voice says: People ask me all the time where I’m living, and naturally I can’t say, but it’s a good place to hide.

“There was an island that I learned about a long time ago and I guess I always knew some day I’d probably have to use it.

“Anyway, I must have spent a year on the island.

“I started travelling all over the world and it’s been enjoyable but it’s been a constant battle of growing beards and this and that to keep from being recognised.”