Victoria's environmental watchdog has overturned all of the approvals it has given to landfills set to accept the West Gate Tunnel's contaminated soil in what has been described as a "monumental stuff up" that has shattered the public's faith in the regulator.

The Environment Protection Authority (EPA) confirmed on Thursday that it had revoked environmental approvals it gave to a further two landfills, Hi-Quality in Bulla and Cleanaway Ravenhall, which were set to accept up to 3 million tonnes of soil contaminated with PFAS.

It comes three days after the EPA notified another landfill, Maddingley Brown Coal in Bacchus Marsh, that it was quashing the approval it granted on September 1. 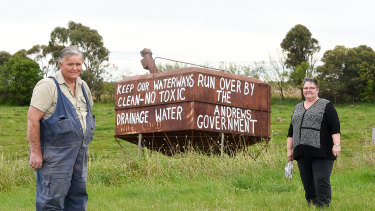 John McKenzie and sister Heather Dodd in front of the protest signs against the dumping of toxic soil from the Metro Tunnel opposite their property in Bulla.Credit:Justin McManus

The EPA has admitted that it over-stepped its powers in giving its environmental sign-off to the landfills applying to receive the road project's soil.

This is due to a legal error – the EPA did not wait to receive key information that it had requested of the landfills before approving their environmental management plans.

The watchdog is now asking all of the landfills to submit new applications for approval.

The EPA's admission has come about because it was being sued by Bacchus Marsh Grammar and the Moorabool Environment Group over the approval it granted to Maddingley Brown Coal. The watchdog came clean about the error the night before it was due to appear in the Supreme Court.

An EPA spokeswoman said after withdrawing Maddingley's approval, the regulator was reviewing the approvals it granted to Cleanaway and Hi-Quality and would ask those operators to submit new applications for approval.

"The MBC [Maddingley Brown Coal Proceedings] caused EPA to conduct a review of its decision to approve the TBM EMP [Tunnel-Boring Machine environmental management plan] submitted by Cleanaway and Hi-Quality," the spokeswoman said.

"As a result of that review, the EPA has formed the view that its decision to approve these environmental management plans is affected by similar technical administrative error and no longer stand as valid decisions under the relevant regulations."

A spokesman for Sunbury Against Toxic Soil, Chris O'Neill, opposes the soil being sent to Hi-Quality and said the EPA's revocations had "shattered our faith in the regulator".

"The regulator should be the gold standard and they've proven that they're not," he said.

"They knew they didn't have this authority, we told them many times and they still went ahead with it until someone was willing to sue them.

"The cost to the community to run a case like this would have been many thousands of dollars … there are not a lot of community groups that have that level of funding to keep the regulators honest and we shouldn't have to.

Opposition transport infrastructure spokesman David Davis said it was an "absolute debacle" and called for the EPA's chief executive Cathy Wilkinson and Environment Minister Lily D'Ambrosio to step down.

"This is a monumental stuff up and her [Cathy Wilkinson's] position is not tenable, nor is the Minister's," he said.

"The EPA has a special duty to safeguard our air, water and quality of life. It has shown itself to be able to be manipulated by the Andrews government, to cut corners and sign off on flawed approvals."

All, EPA, gate, quashes, Tunn, West
You may also like: